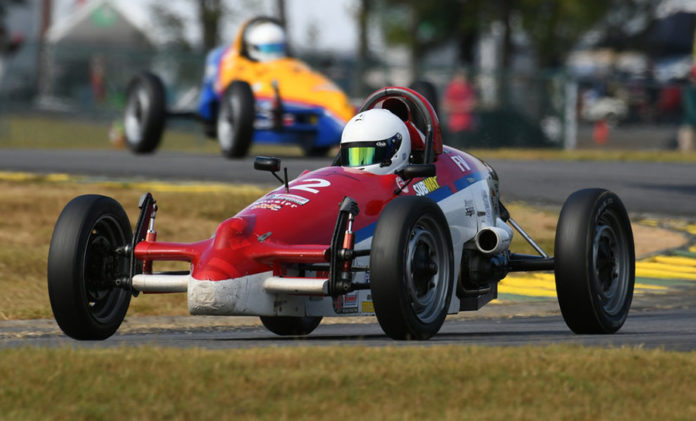 Forty years after it was last sold new, the original Volkswagen Beetle can still be found on American roads, a testament to its popularity and engineering. The same holds true for American race tracks, where an important part of the Beetle legacy has only grown more popular over the years.

Since its start in the early 1960s, Formula Vee racing has offered one of the most competitive and affordable forms of open-wheel racing anywhere in the world. Developed by a group of independent dealers, the series has stayed mostly unchanged since the ‘60s, relying on engines, transmissions and suspension parts found in the 1963 Beetle, wrapped in a basic steel-tube frame with a fiberglass body.

Stuffing an engine that made 40 horsepower in stock trim in a race car might sound like a formula for boredom. But much like the original Beetle itself, Formula Vee hews to a simple but effective working philosophy; if it ain’t broke, don’t re-engineer it. By keeping costs low and setting rules that strictly avoid the kind of mechanical rule-bending that much of motorsport embraces, Formula Vee offers wheel-to-wheel racing that rewards skill more than spending.

Over the decades, Formula Vee has proven so popular that it was copied around the world. Many championship and top-league open-wheel racers traced their careers back through Formula Vee, and it remains one of the most popular classes in the Sports Car Club of America’s racing series. Andrew Whitston, SCCA’s 2019 national Formula Vee champion, was born into it; his father Ron Whitston has been racing and building Formula Vee cars for almost five decades.

“It’s road racing that somebody with a middle-class income can afford to do,” said Whitston, who’s been racing Formula Vee for 11 years. “There’s a lot of knowledge and a great community who want to help out. Most people are concerned about having good races on the track together, and that adds to the fun.”

Buying an all-new Formula Vee car can run $15,00 to $20,000, but well-sorted used ones can be found for half that, and a beginner can rent a car and all the setup and expertise needed to get on track for about $2,000 a race. With a 1,025-pound minimum weight with driver and the four-speed Beetle transmission, the modern Formula Vee cars can hit 120 mph on track but are simple enough that a team can make repairs and improvements quickly. And once built, Formula Vee cars can remain competitive for decades, thanks to the consistent rules.

This year’s Formula Vee races were delayed by the coronavirus but restarted a few weeks ago. Those races were a milestone for Whitston; not only was he racing against his father, but his two brothers also joined the Formula Vee class as well.

“I’ve always enjoyed these years racing against my dad, and to have all four of us on track competing against each other is something really special,” he said. “These are the days I’ll remember when I get older.”

Master of the Peaks – ‘Half-track Fox’ Up and Running Again