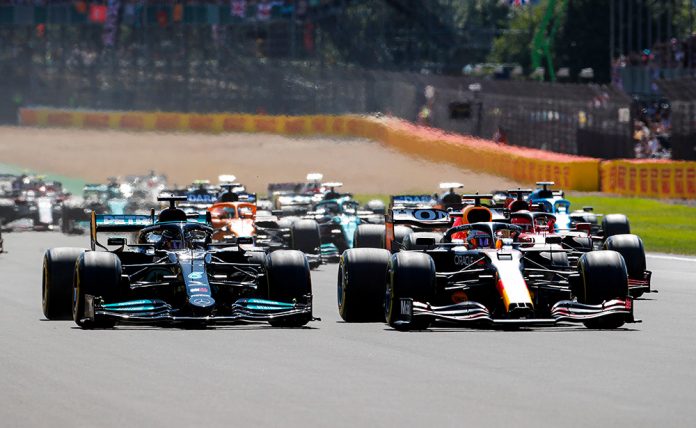 Max Verstappen spent most of June and July establishing a gap of more than a race’s worth of points between himself and the rest of the Formula 1 field, building that lead by way of four wins in five races.

Yet in one lap at Sunday’s British Grand Prix, all the hard work went for naught.

Verstappen, starting on pole after winning F1’s maiden attempt at a sprint race to set the race grid, battled Lewis Hamilton for the lead through a thrilling opening lap at Silverstone. After failing to make passes stick earlier in the lap, Hamilton went side-by-side with the lead Honda-powered Red Bull through the Copse turn. Hamilton and Verstappen had contact, with Verstappen getting the worst end of it. His Red Bull Racing Honda skimmed across the gravel and had a heavy impact with the tire wall, ruining his car and ending his race on that first lap.

Hamilton was given a 10-second penalty for being ‘predominantly at fault’ in the crash, but the British driver went on to win his home Grand Prix for the eighth time in his career. The win, along with Verstappen’s inability to score, brought Hamilton right back into the title fight, as he trails the Honda driver by just eight points after 10 rounds.

Scuderia AlphaTauri’s Pierre Gasly qualified 11th while teammate Yuki Tsunoda gridded 16th after failing to advance into Q2 on Saturday. The pair flirted with the top 10 through the latter half of the race, with Gasly’s point-scoring bid torpedoed by a flat tire just after he moved around Kimi Raikkonen and into the top 10. Tsunoda took advantage of that flat tire and Raikkonen’s spin to move into 10th to secure Honda’s lone point of the day. The late move allowed Honda to extend its point-scoring streak to 48 F1 races, dating back to 2018.

Sergio Perez started on Pit Lane after an incident in the qualifying race left the Mexican driver in need of pre-race repairs. He moved through the field and into 9th place by Lap 34, having pushed his harder Pirellis long on his opening stint. He moved into 10th again with five laps to run but pitted again for soft tires and stole the fastest lap of the race from Hamilton.

Verstappen leads Hamilton by eight points in the Driver’s Championship, while Perez fell back to fifth after going scoreless. Red Bull leads Mercedes by four points in the Constructor’s Championship while AlphaTauri holds a one-point advantage over Aston Martin for fifth. The series will have a week off to recover before heading to Hungary on August 1.

Toyoharu Tanabe
Technical Director, Honda F1
“This was a tough result to take for us in today’s British Grand Prix. Max made a good start as usual, but Lewis collided with him at Copse, causing Max to crash heavily into the barriers. It was very disappointing, but the most important thing is that he is okay, although under observation in hospital. Checo also had a difficult race starting from pit lane, after retiring in Sprint Qualifying, as overtaking is difficult here and traffic can be a problem. He got as high as tenth at one point, but unfortunately eventually finished out of the points. As for Scuderia AlphaTauri, they had a difficult time all weekend, with Pierre having to make an extra stop because of a puncture. But Yuki managed his race well and got a precious point for the team by finishing tenth. This result is not what we wanted, but we know that a championship battle can often be like this and it will go on for the rest of the season. We are now already focusing on the next round in Hungary.”

Max Verstappen – Red Bull Racing Honda
Start 1st, Finish: DNF
(There are no quotes from Max Verstappen as he was taken to a local hospital for observation after his accident)

Sergio Perez – Red Bull Racing Honda
Start: 20th (started on Pit Lane), Finish: 16th
“I’m very disappointed with my weekend and my performance. I wasn’t able to make as much progress as expected and found myself in a very difficult position with the tires. As soon as we were in the DRS train it was impossible to overtake people. I think P7 was possible today, with a couple more laps I think I could have got Lance and Fernando but in the end for strategic reasons we decided to stop to take the fastest lap. It’s a weekend for us to forget and we lost a lot of ground in the Championship, we need to regroup, work hard and come back as strong as possible in Hungary. I need to re-watch the incident with Max and Lewis as I haven’t seen it, but the most important thing that Max is okay.”

Pierre Gasly – Scuderia AlphaTauri Honda
Start: 11th, Finish: 11th
“Honestly, I have no words. We were in the points right until the end, then unfortunately I had a puncture and had to box with five laps to go. It’s very frustrating to be coming away with no points after today’s race. There are still some positives to take away though, as after quite a difficult weekend, the pace when I was alone in the middle of the race today was quite good, once I’d managed to clear the traffic. We obviously want to continue to fight for better positions, so we’ll work hard to understand the areas we’ve struggled with this weekend and hope to be more competitive again in Hungary.”

Yuki Tsunoda – Scuderia AlphaTauri Honda
Start: 16th, Finish: 10th
“I’m quite happy to have come away with a point today. I tried to stick to the plan, really focus on tire management, and I think I achieved that well. I’ve struggled a bit throughout the weekend and the different format has made things slightly more difficult for me as a rookie, so I’m pleased to have come away with an all-important point for the team.”