Velocity Invitational to Return to Weathertech Raceway Laguna Seca for a Weekend of Motorsports, Supercars and More

America’s premier motorsports lifestyle event October 14-16 connects the beauty of Monterey with vintage racing in a spectator-friendly format showcasing the best food, wine and cars in the Western Hemisphere. 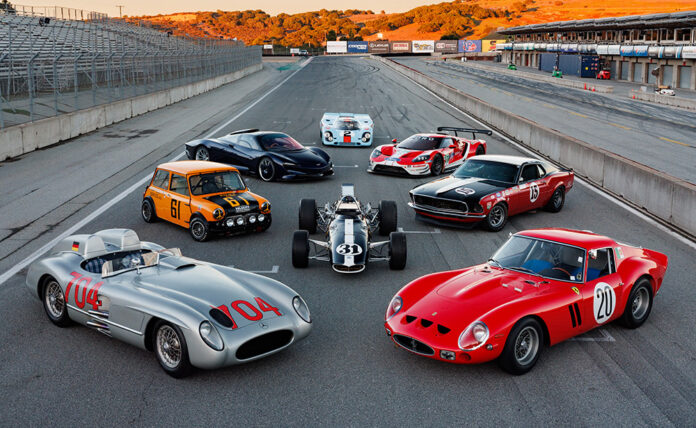 Velocity Invitational, a motorsports and lifestyle event, returns to Monterey, California, this fall with a lineup of the world’s best cars competing on the track at Weathertech Raceway Laguna Seca. Off-track luxury viewing areas will serve fine wines and gourmet food, allowing spectators to enjoy the action in comfort. Tickets for the event are now available at VelocityInvitational.com.

Returning in 2022 will be the much loved “Minis vs. Mustangs” race group, which saw some of the most action-packed racing at the 2021 event. With Mustangs dominating the straights and Minis the corners, there is no shortage of excitement during this rare night race. Fans can also expect many world-class vintage sports and racing cars from the likes of Ferrari, Porsche, McLaren, Bugatti and more.

“Velocity Invitational is now entering its third thrilling year,” said Velocity Invitational Founder Jeff O’Neill. “Thanks to the support of event sponsors and the fans who join us each year, we’ve been able to turn up the dial. Expect more cars, food, wine and even better facilities for visitors to enjoy this year.”

Highlights from the 2021 event included hundreds of iconic race cars such as three Ferrari 250 GTOs, six Porsche 917s and a rare on-track appearance of one of only six surviving Mercedes-Benz 300 SLRs. The Velocity Invitational also partnered with the McLaren Racing Formula 1 team last year for demonstrations of some of the team’s most important cars, including the 2011 MP4-26 and 2012 MP4-27 McLarens that brought numerous victories to Lewis Hamilton and Jenson Button. Two-time Formula 1 World Champion Mika Häkkinen attended the event as well, where he piloted his 1998 Australian Grand Prix-winning MP4/13A around Laguna Seca and took guests out for demo laps in the two-seater MP4/98T.

Once again, Velocity Invitational will welcome partner Mclaren Racing, which will reprise its participation by bringing the Mclaren Racing Formula 1 team for the only West Coast showcase of modern Formula 1 cars. The event will also see expanded vintage racing groups showcasing some of motorsport’s most iconic vehicles on track and on display. The expanded event plaza will feature a luxury viewing area and Velocity Lane Lounge, catering to enthusiasts and spectators of all ages. New this year will be “The Oasis,” a beverage garden at the heart of Laguna Seca featuring luxurious air-conditioned accommodations and a wonderful view of the on-track action. The wine, spirit and beer-focused area will feature some of the region’s best, including Robert Hall, Ram’s Gate and more.