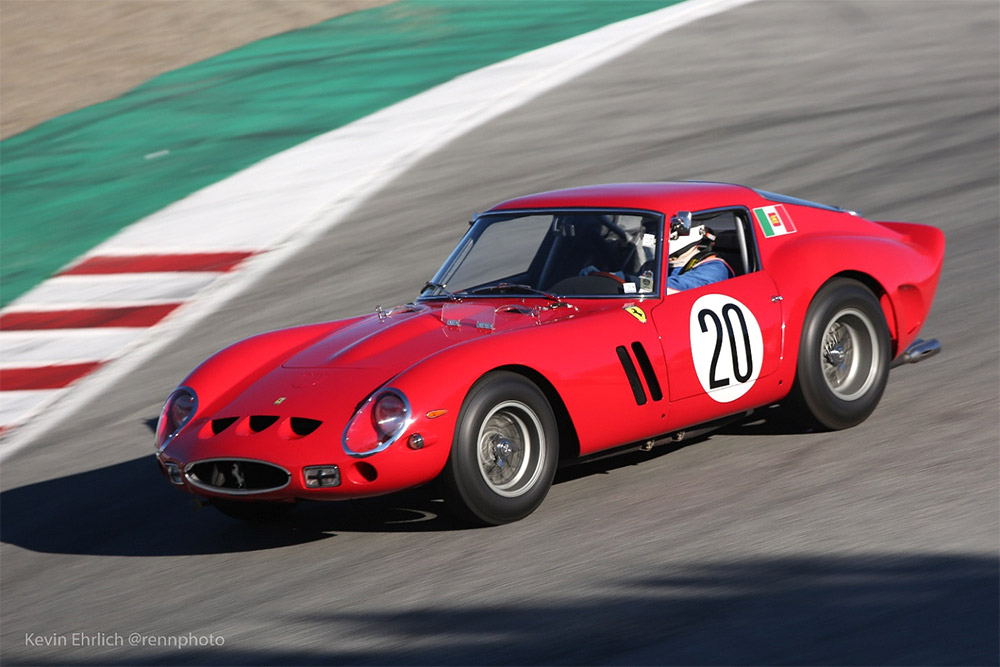 “When I go to Velocity Invitational, I will see the rarest cars in the world and I know that I’m going to see them on the track.” As far as mission statements go, event founder Jeff O’Neil’s vision for Velocity Invitational is described through the eyes of the guest. Those fortunate enough to have attended the first two iterations of the event can testify that they saw the rarest cars in the world at speed. 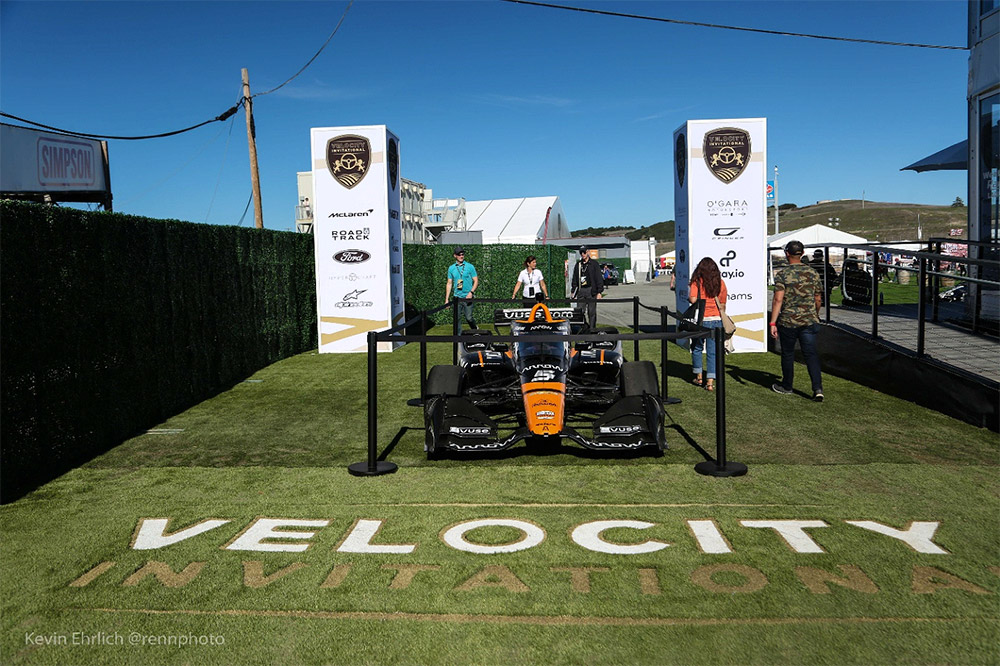 What is the Velocity Invitational? Think of it as an American version of Goodwood Festival that features spirited driving of rare and authentic period-correct cars amidst comfortable surroundings that bring spectators, drivers and cars together. The goal isn’t cut-throat driving where a trophy or bragging rights are paramount. It isn’t about vintage cars modified with modern tweaks to crush the competition or trailers arranged as barriers to keep prying eyes away from getting too close to the equipment. 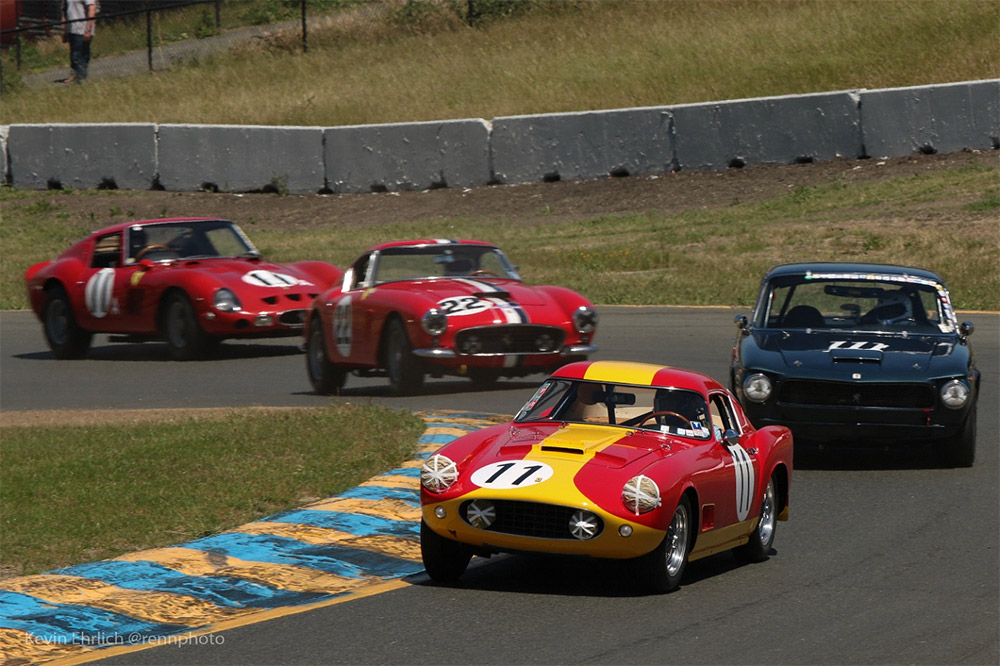 After the inaugural event at Sonoma Raceway in May 2019, momentum built for a second event before public health concerns intervened and prevented a 2020 encore. However, O’Neil and his team used the delay to further develop the concept. They re-branded to become the Velocity Invitational and moved to the Monterey peninsula and the historic Laguna Seca Raceway for a November 2021 re-launch. The result was a compelling way to spend a weekend. 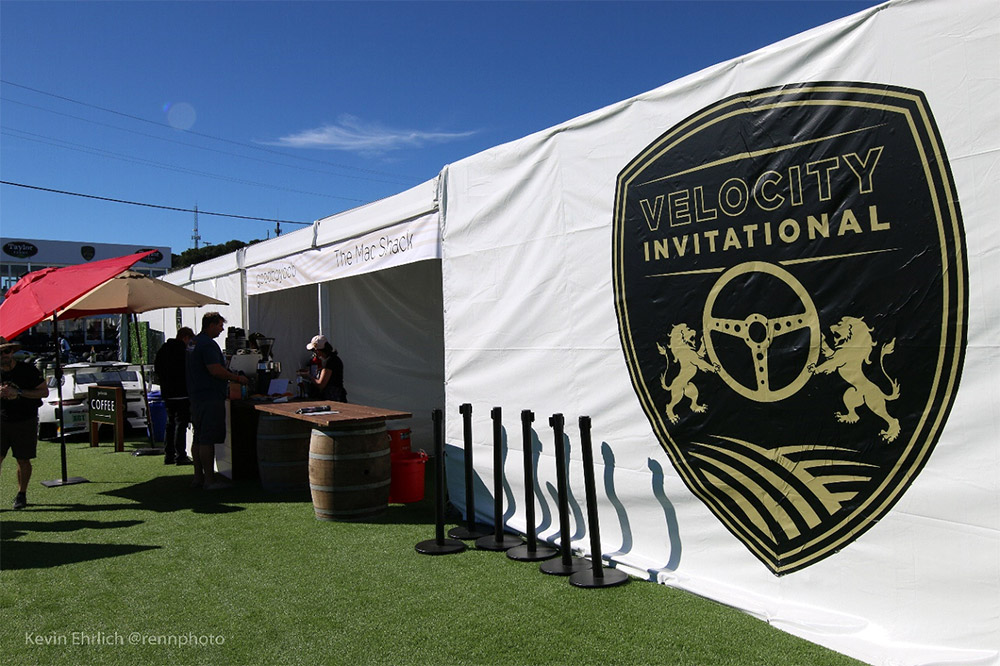 In a recent conversation with The Speed Journal, O’Neil recalled the origins of the event. “The genesis started because these events were so unfriendly to children and guests, girlfriends and wives, families and nobody ever thought we should try to organize to be educational, enjoyable and a family event where everybody could come and have a great time.” 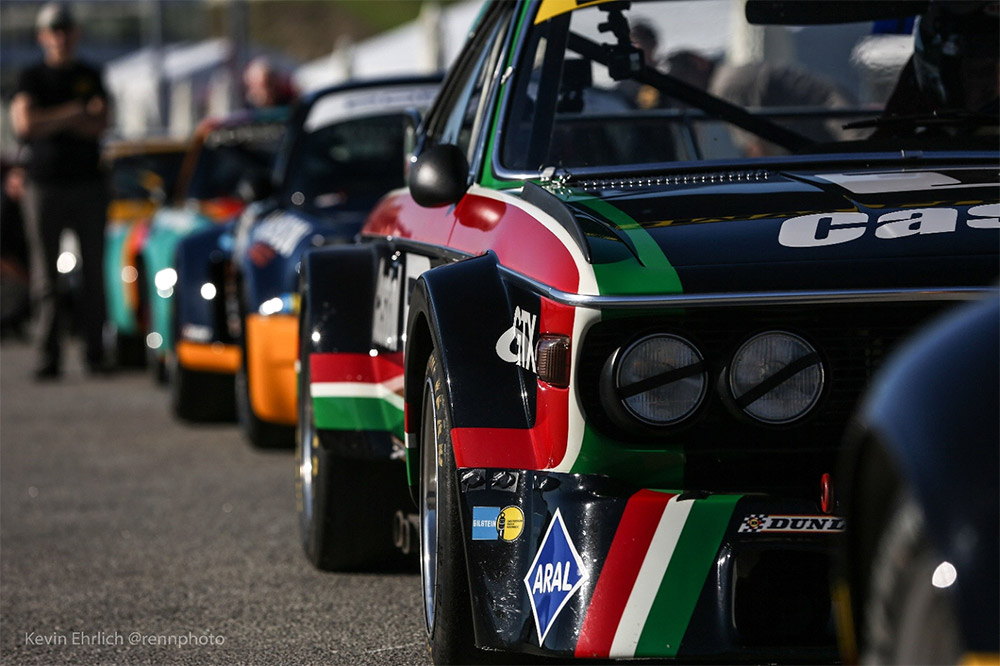 Before the gates opened at Sonoma in 2019, O’Neil stood atop the hill at Sonoma with the President of the race track looking over the paddock with three acres of lawn and white fences. The President said “we’ve never seen this here before.” O’Neil said, “It was an ah-ha moment. They never re-imagined how to do a luxury event with great spectators and great cars. It was fun to see because nobody had ever reimagined it.” 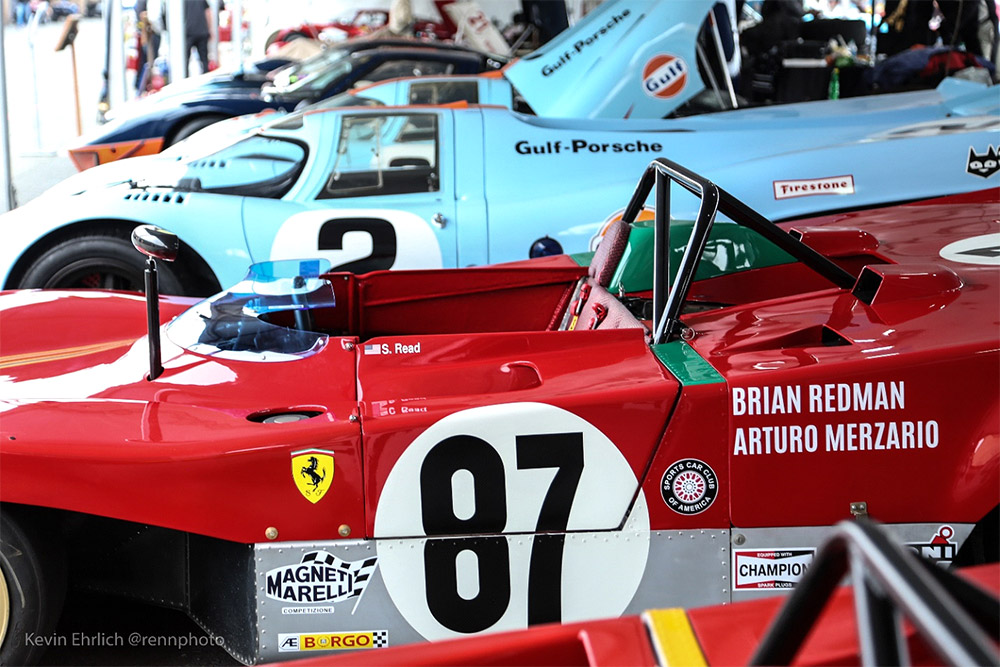 What makes Velocity Invitational unique? With other vintage racing events around the country, why did thousands of spectators roam the Laguna Seca grounds last November?

First, the event focuses on rare and authentic cars. O’Neil says that the paddock and track could accommodate more cars, but the event is an “invitational” for a reason. For the upcoming event in October, over 350 cars applied and only 220 were accepted. In some cases, owners apply. In other cases, O’Neil and his team work the phones asking owners to bring interesting cars out of their collections. “Every car is authentic,” O’Neil says. “Our cars either run in period or have been restored or prepared as they were in period or they don’t make the cut.” O’Neil has turned collectors away to avoid having mismatches like a hypothetical Sunbeam with Hoosiers and a transplanted V-8 engine taking on a Ferrari GTO. “We’ve told serious collectors to go out and find a great car. We want them to participate, but there are plenty of great cars out there.” 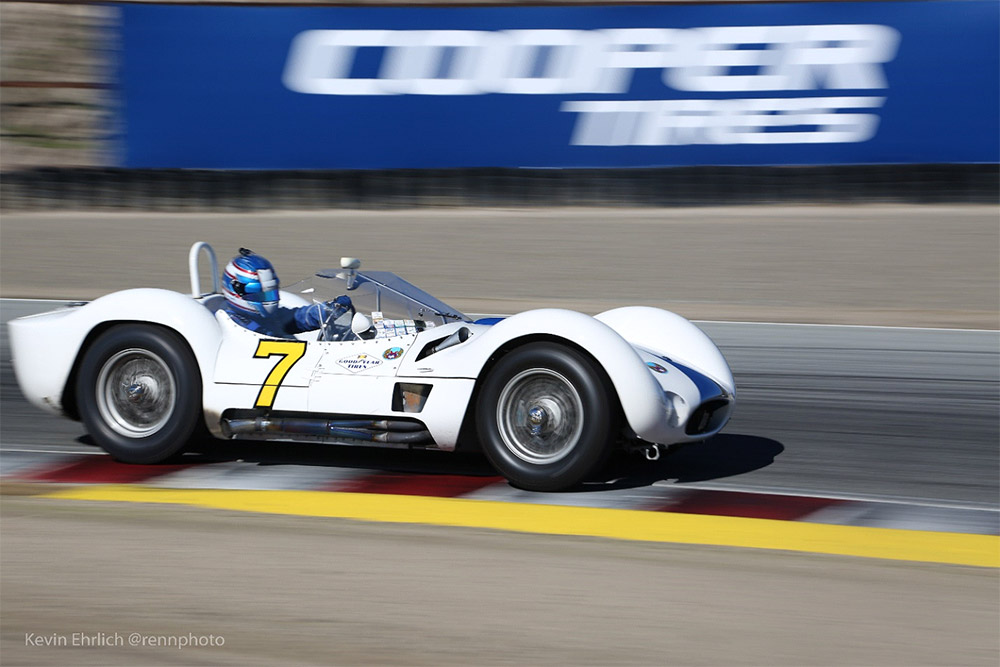 Second, O’Neil wants owners who want to share their cars and engage with guests and spectators. The goal isn’t a demonstration of wealth or an exercise in hiding in trucks and transporters. O’Neil believes that owners of such special cars have an obligation to share them and Velocity Invitation is designed to provide a comfortable and welcoming venue for them. The track action is competitive, but not wheel banging. Drivers have space to push as hard as they’re comfortable without having to worry that other drivers nearby think they’re auditioning for a Formula One drive. 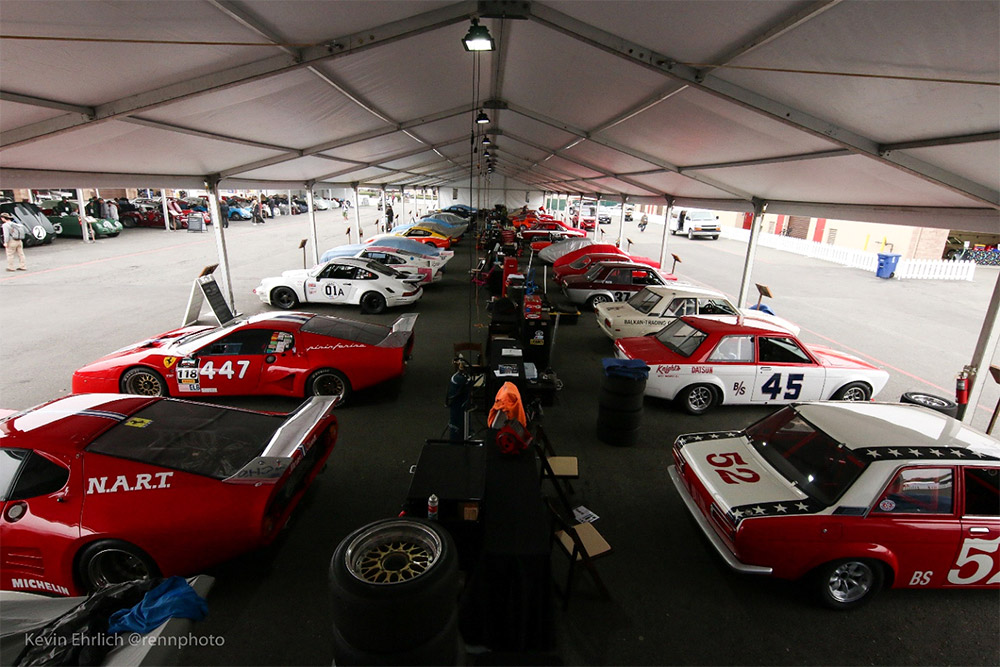 Race groups are clustered together under giant tents. The intentional layout is visually striking and designed to facilitate an open and accessible environment. Touches like these – even down to the color of the garbage cans – helped transform a blank canvass paddock of pavement into something unique. At Laguna Seca, the false grid for each race group set up in the middle of the paddock with umbrellas and hay bales where spectators could easily see the action rather than hiding behind the garages adjacent to pit lane. 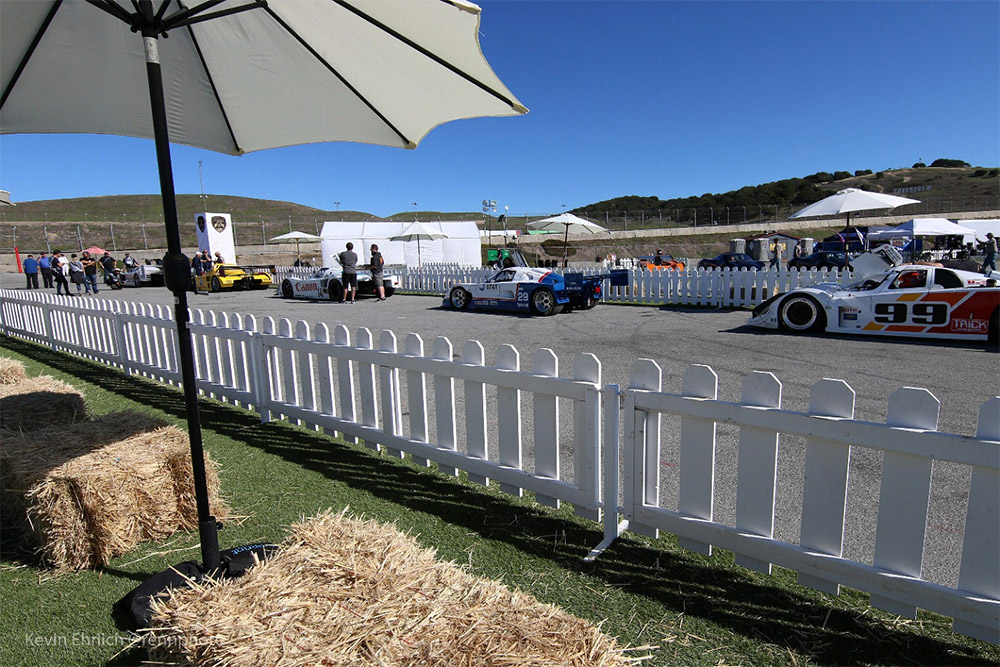 Third, O’Neil and his team focus on the spectators and guests. “We want to entertain and educate,” he says. Spectators see a timeline of significant cars and learn about marques they may have never seen before. Special cars like the Mercedes 300SLR get track time for exhibition runs. 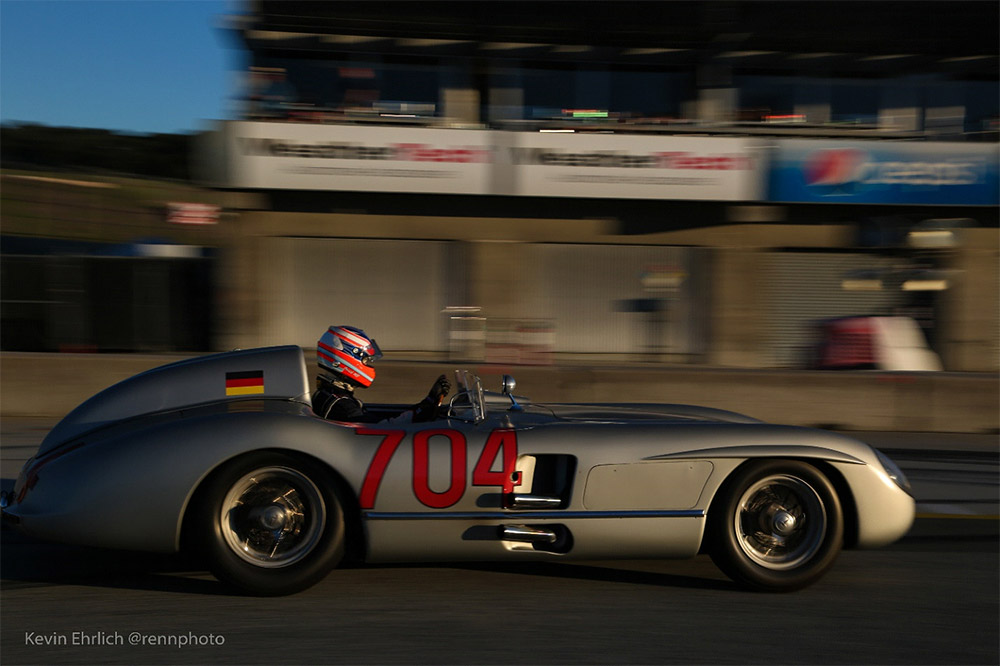 In 2021, a highlight for many was the twilight races pitting Minis against Mustangs. Dozens of minis lined up door-to-door-to-door in the paddock. They danced through the corners while the bigger Mustangs blew past on the straights. Hundreds gathered in the pavilion overlooking the track as the sun set and more lined the fences around the natural terrain road course. O’Neil said they raided the event piggybank to put temporary lighting at some of the corners to make the race work. The idea was a hit and is on the schedule again for 2022 with an entry list of 26 cars. 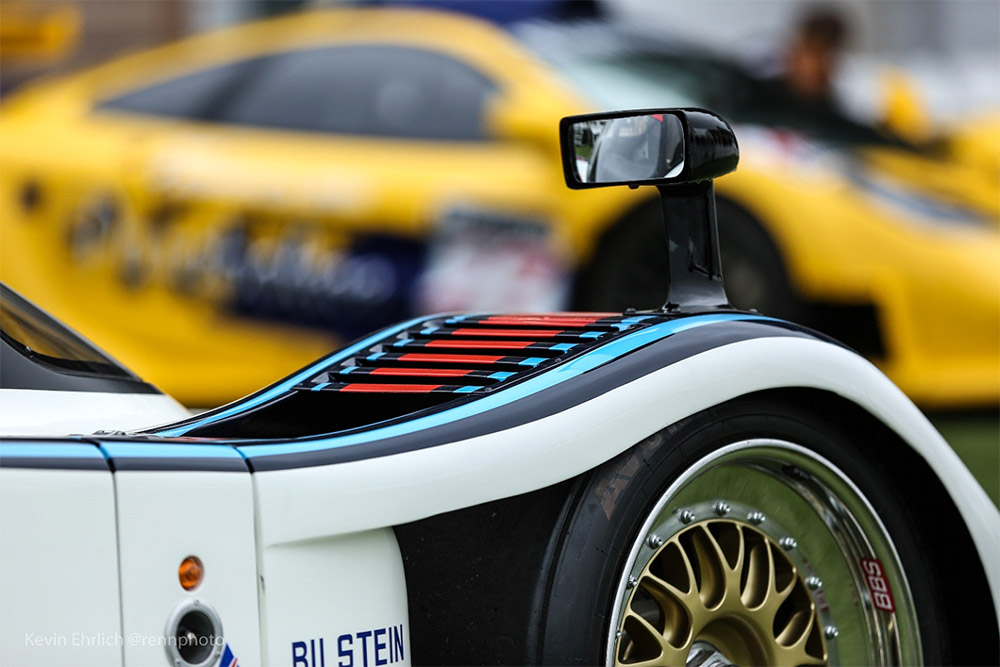 With so many race groups spanning so much motorsports history running across several days, spectators have many chances to see their four wheeled heroes in motion. It would be silly to attempt to list all the stellar machinery – the full entry list is posted here. 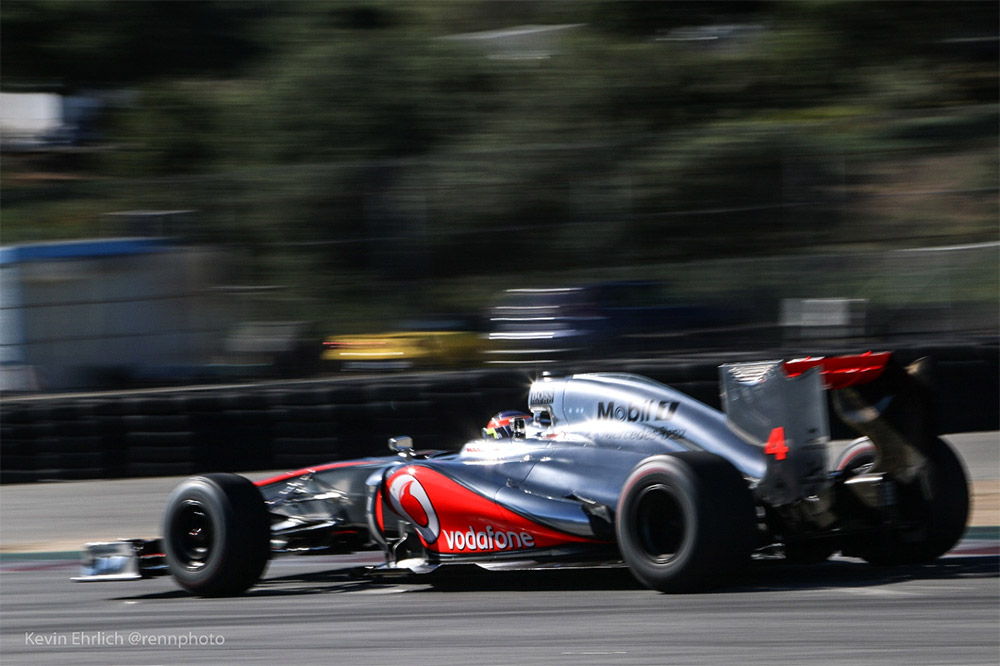 Velocity Invitational is not just about older vintage cars. Zak Brown at McLaren is a big supporter and arranged for a garage full of Formula One cars in 2021. Formula One champion Mika Häkkinen was reunited with his 1998 McLaren MP4/13A for exhibition laps. The screaming Mercedes V-10 engine echoed across the hills, bringing spectators and cameras to the fences. Indycar driver Pato O’Ward wedged himself into a McLaren two-seater Formula One with Häkkinen at the wheel before getting his own chance for very spirited laps in the Finn’s championship car the next day.

Guests for the upcoming Velocity Invitational can expect more McLaren Formula One machinery and special guest drivers. Adding to the open-wheel flavor, a collection for Formula One cars recently on display at the Petersen Museum will be on hand. McLaren fans will also see several McLaren F1 road cars to celebrate the icon’s 30th anniversary, including a Gulf-liveried F1 GTR that raced at LeMans. 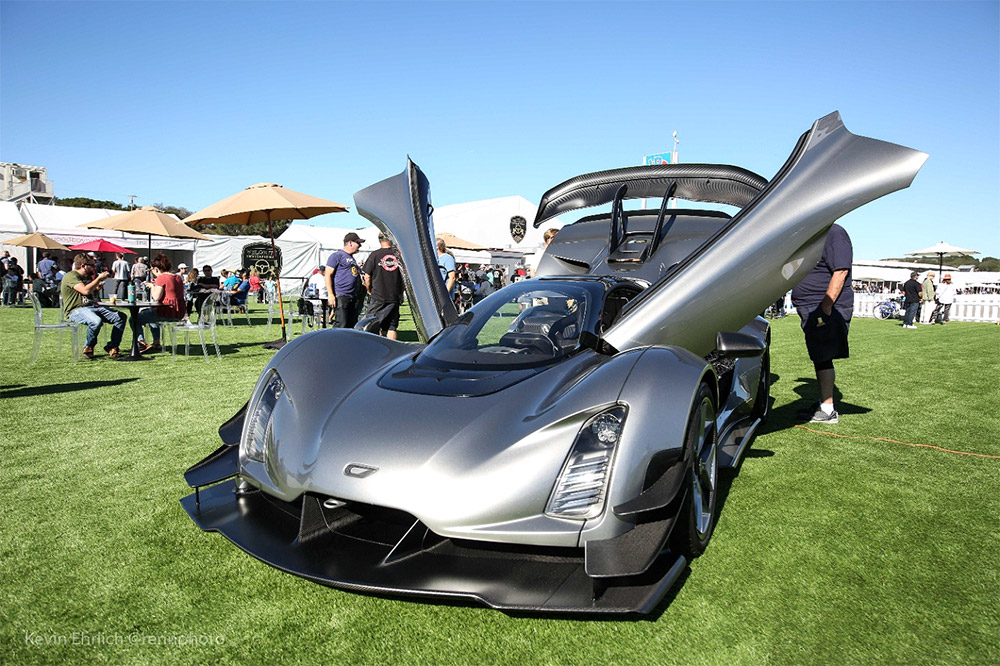 Those interested in the current crop of road-going supercars will have plenty to see as well. Manufacturers like Czinger, Zenvo and Hennessy will show their mind-bending creations. Dealers will bring the best from Lamborghini, McLaren, and more. In some cases, spectators are also prospects and buyers. In past events, sponsors positioned cars for display, but the paddock offered random eye candy that hitched a ride on car transporters headed to Monterey. One of the most amazing parts of Velocity Invitational are the surprises around every corner. 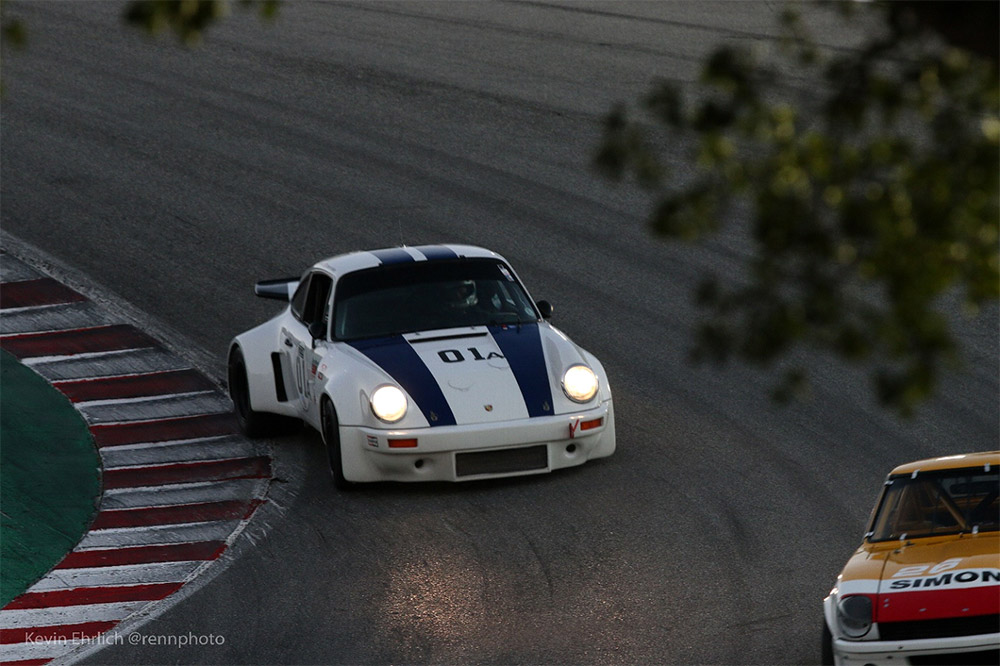 Laguna Seca is a well-known and favorite facility, but O’Neil envisions being open to returning to Sonoma. In addition to being a technical track that drivers enjoy, the proximity to wine country gives the off-track activities a special flavor.

If this all sounds like fun and you want to learn more about the 2022 event, check the Velocity Invitational webpage, which includes a detailed schedule of events and entry list.

Click here to read The Speed Journal’s report on the 2019 event at Sonoma Raceway.

Click here to read The Speed Journal’s coverage of the 2021 event at Laguna Seca.

Click here for a look inside the 2021 event through the eyes of a Datsun 240Z racing in Group 7.

Meanwhile, O’Neil and team are already looking ahead to 2023 and celebrating McLaren’s 60th anniversary. You bet they’ll do something special. Dream big…