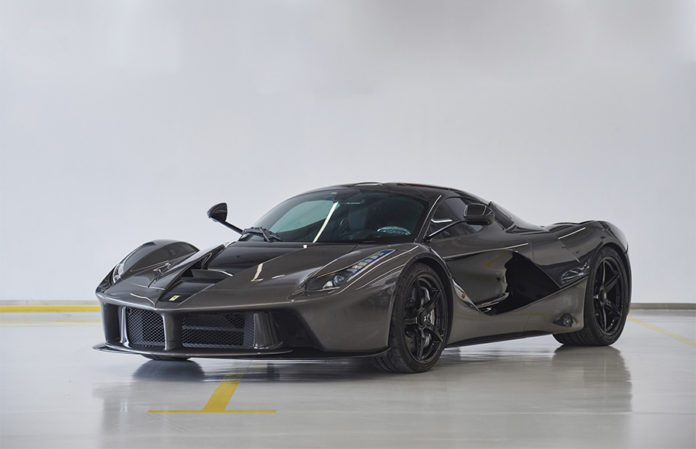 On 8 September at its Goodwood Revival Sale, Bonhams will offer two of the most highly sought-after, powerful and collectable supercars of the modern age. The 2017 Ferrari LaFerrari Aperta is estimated at £5,000,000-6,500,000 and the 2015 Ferrari LaFerrari Coupé at £2,300,000 – 2,800,000. This is only the second time in history that a LaFerrari Aperta has been offered at public auction.

Widely recognized as one of the most important supercars created in the past decade, the LaFerrari represents the pinnacle of Ferrari’s longstanding supercar heritage. Drawing on F1-derived engineering and design, the LaFerrari caused a frenzy when it was first released and became an instant classic.

The 2015 example is finished in Grigio Reventon Lucido, a stunning metallic gunmetal grey with an elegantly accenting Piano black centre section and black and red interior – it has covered just 5,900km. The striking futuristic design is complimented by its hulking V12 hybrid engine that produces an astonishing 963bhp at 9,250rpm and is capable of more than 200mph.

The 2017 Aperta is the ultimate evolution of the groundbreaking model, and only 210 were ever created. Finished in Nero Daytona with red and black interior, this is a true Ferrari masterpiece and a very low mileage example with a mere 510km on the odometer. This is only the second occasion on which a LaFerrari Aperta has been offered at public auction, making this an unmissable opportunity for a serious ferrarista to add one of the most collectable cars ever created to their stable.