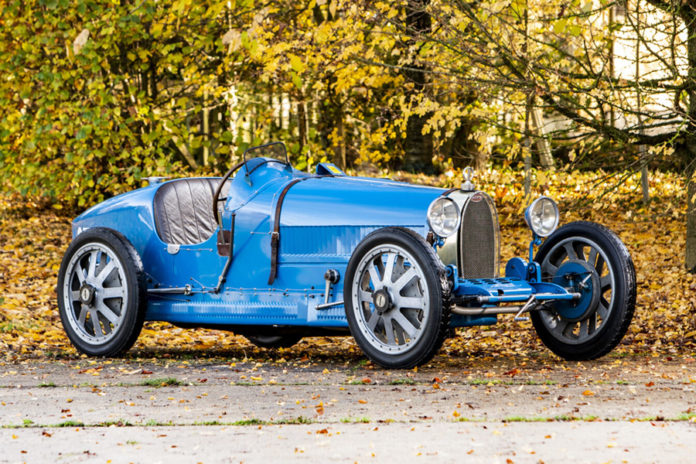 The septet represent the golden age of French and indeed world automotive craftsmanship, innovation and performance – and are fittingly showcased in the very venue where they were first unveiled to the world.

In pole position is one of the most important sports models of the marque’s golden era, a 1932 Bugatti Type 55, which started life as a works entry in the 24 Hours of Le Mans driven by two of the era’s most celebrated racing drivers, Louis Chiron and Count Guy Bouriat-Quintart.

One of only 29 known surviving Type 55s (of a total 38 produced), this car is noted for its striking and unique coachwork – configured as a two-seat drophead with highline doors – designed by Parisian automotive designer Giuseppe Figoni. He was commissioned by its second owner, French publishing magnate Jacques Dupuy, who entered the Bugatti in the Paris-Nice Rally and the Bois de Boulogne concours d’elegance.

This 55 is now offered for the very first time at auction, following an incredible 56 years in the ownership of one discerning British family. Estimate on request.

Lining up alongside the 55 are not one but two examples of the celebrated Type 57– considered the quintessential road-going Bugatti and the first model designed entirely under the direction of Jean Bugatti, featuring advanced engineering including a dual-overhead cam engine and an independently sprung chassis.

The first is a rare 1938 ‘Atalante’ Coupé (one of only 34 examples), regarded as the most sporting derivative of the car, styled by Jean Bugatti himself. This example is finished in rakish period two-tone black and purple paintwork and has an estimate of €1,500,000 – 1,800,000. A similar 1935 Atalante, from the collection of the late Barry Burnett, was successfully sold last year by Bonhams at the Goodwood Revival Sale, achieving a final total of €1,693,594 (£1,499,000).

The Atalante’s sale sibling in Paris is a beautiful supercharged 1939 Type 57C ‘Stelvio‘ cabriolet, named after the legendary Alpine pass in Italy, of which only 40 examples were delivered. With coachwork by Gangloff, this was one of the last Bugattis sold before the Second World War and the personal car of Georges Groslambert, prominent industrialist, Bugatti dealer and marque enthusiast.

The story is that Stelvio was hidden during the war in one of the Groslambert factories but re-emerged in peacetime to enter the 1949 Rallye de Franche-Comté with its enthusiast owner. The car has only had two further owners, covering some 45,000 km in its lifetime. Estimate €1,350,000 – 1,650,000.

The fourth Bugatti flying the French flag is a 1925 Type 39 Grand prix Racing Two-Seater – identical to the most successful racing car ever, the Type 35, but fitted with a smaller 1.5 litre engine to comply with 1925’s new racing regulations.

In its debut race, the 1925 Grand Prix de Tourisme, the ex-works car finished third, achieving the same result in that year’s Italian Gran Premio in Monza, while finishing 7thoverall in the Italian Grand Prix. Its finest hour came six years later and 16,000 km away as winner of the 1931 Australian Grand Prix. This car has been more recently exercised on hill climbs and is eligible for the most prestigious international historic race meetings. Estimate: €1,050,000 – 1,400,000.

The Bonhams Grand Palais Sale is renowned for showcasing pre-war Grand Marques and this year’s edition offers the finest of the era including the supercar of the 1930s, a 1935 Mercedes Benz 500K Cabriolet A. Designed by the in-house coachworks Sindelfingen and engineered by Hans Nibel, who created the chassis for the first legendary ‘Sliver Arrows’ racing cars, only 31 Cabriolets were built.

This example was delivered new to the celebrated French film actor of the era, Henri Garat. In the 50-year ownership of its most recent custodian, the 500K has benefitted from a comprehensive restoration. Estimate is €1,500,000 – 2,000,000.

Lining up with the 500K is a trio of sports cars, which are all eligible for the most prestigious historic races and concours:

Approximately 100 lots representing nearly 100 years of motoring history from Edwardian elegance to 21st century supercars will be in the spotlight at the Grand Palais, available to view on Wednesday 5 February (9am to 5pm) and from 9am on sale day, Thursday 6, with the auction starting at 2.00pm.