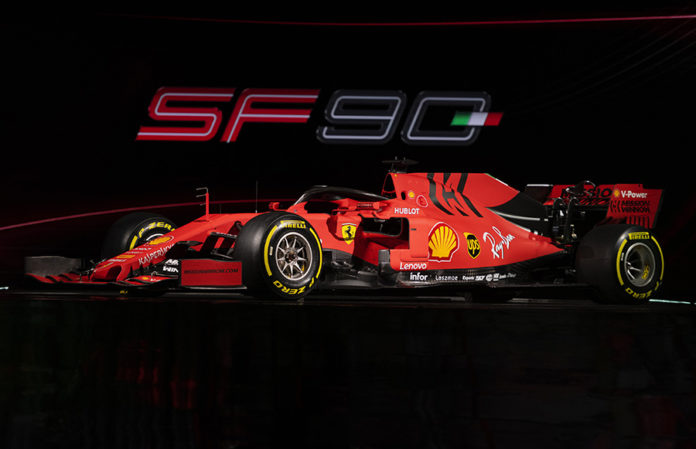 The SF90 (design code 670) is the sixty fifth single-seater built by Ferrari to compete in the Formula 1 World Championship. The car has been produced based on the new regulations, which have required various changes compared to the 2018 car. Among the most obvious changes are those to the front and rear wings. The front wing is wider and boasts simpler aerodynamic profiles, while the rear is wider and higher. The bargeboards have been reduced in height, while the front brake duct design has been simplified. The overall weight of the car increases to 743 kilos, including the driver and his kit, which must weigh a minimum of 80 kilos. The fuel allowance for the race increases from 105 to 110 kg. The SF90 is the sixth car built for Formula 1’s current hybrid era, which began in 2014. 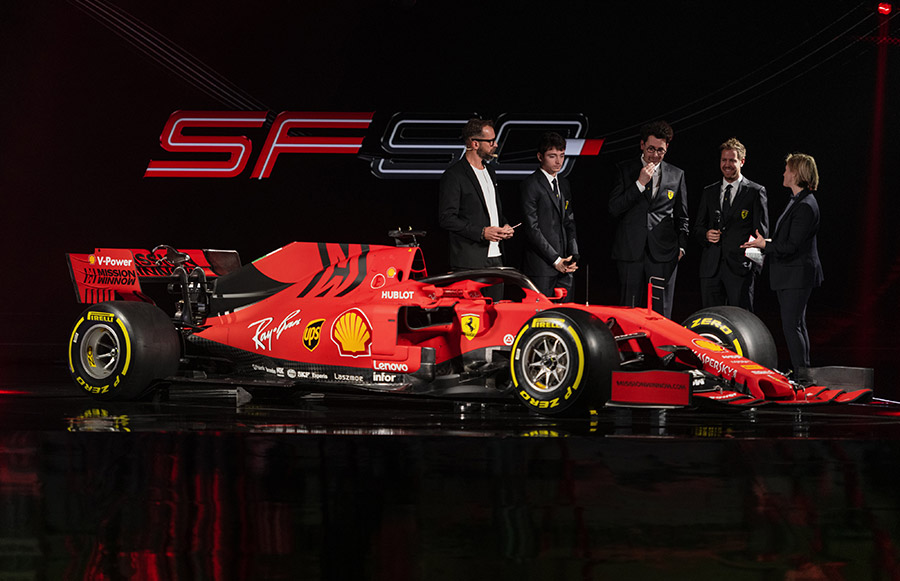 Front wing
The front wing is one of the most important components of the car, in that not only does it produce downforce at the front end, it also conditions the quality of airflow over the rear, which is a key factor in delivering effective aerodynamics. The 2019 regulations require a simplification of the front wing. Its width is increased to 2 metres, which is exactly the same as the track of the car, while the number of horizontal elements cannot exceed five. The vertical elements at the extremities of the wing are no longer allowed and the geometry of the endplates has been simplified. The purpose of these changes is to make the cars less sensitive to the outwash effect when following another car.

Front brake ducts
The brake ducts are a very important component on a Formula 1 car. They are designed to cool the carbon brake discs that can reach temperatures of over a thousand degrees Celsius. Over the years, the shape of the front air ducts has become extremely sophisticated and they have evolved to also play an aerodynamic role. In 2019, this is another component that has been simplified in the regulations. 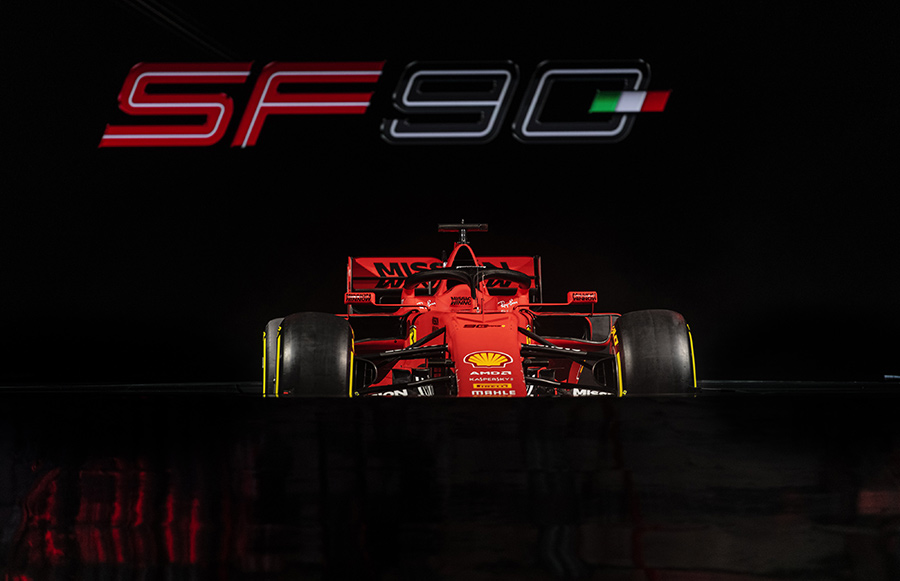 Rear wing
Like the front wing, the rear has also been subjected to rule changes for 2019. It is higher by 70 millimetres, increasing from 800 to 870mm and wider, increasing from the previous 950 to 1050mm. The end plates are 100 mm longer and house the rear lights, which consist of a pair of LEDs at the outer edges of the rear wing, in a solution similar to the one already adopted by the FIA for LMP1 and LMP2 prototype cars. Rule changes also affect the Drag Reduction System (DRS,) which is now more effective.

Bargeboards
The bargeboards are the side-mounted vanes that, on a current Formula 1 car help direct air flow to some specific areas of the car. Rules introduced for the 2019 season have limited the design options in this area, by reducing the area available to the designers. The maximum height for the bargeboards drops from 475 millimetres to 350 above the reference plane.

Weight
The 2019 Formula 1 regulations see the weight of the car increase by 10 kilos from 733 to 743kg. The fuel allowance for the race increases by 5 kg from 105 to 110. In addition, the minimum weight for a driver, including the equipment and seat is set at 80 kilos. For drivers who do not reach this minimum, their cars must take on ballast, which must be fitted in the cockpit area only. 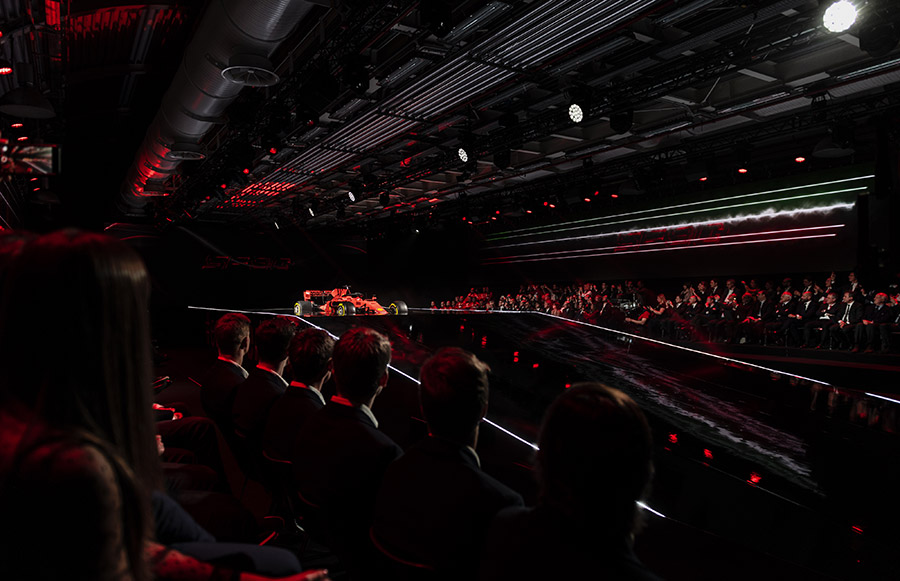 Engine cover
The engine cover of the new Ferrari to be raced in 2019 is considerably narrower in order to improve the car’s aero efficiency. Work on refining engine components and relocation of some of its ancillaries has led to a reduction in the space taken up, thus allowing for a much more compact bodywork design. This has the advantage of cleaning the airflow to the rear wing. The air intake now has a similar shape to that found on the 2016 car, while work on the fluid-dynamics inside the car means it has the same level of cooling efficiency as the SF71H, while taking up less space.

Power Unit
A Formula 1 Power Unit consists of six components. These are, the internal combustion engine – a 1.6 litre turbocharged V6; two motor generators, the MGU-K (Motor Generator Unit-Kinetic) and the MGU-H (Motor Generator Unit-Heat). The MGU-K is derived directly from the system known as KERS, which recovers kinetic energy under braking and stores that energy, up to a maximum of 4 MJ in the battery pack. As for the MGU-H, it recovers thermal energy from the turbo. Another element is the battery pack, where the recovered energy is stored until it is released. The sixth element is the electronic control unit. For the 2019, Ferrari 064 Power Unit, both the thermal and mechanical efficiency has continued to develop. This was achieved working on engine combustion, energy recovery and fluids. The Power Unit layout has been designed in symbiosis with the overall car design, while Energy Storage system reduced its weight and volume. 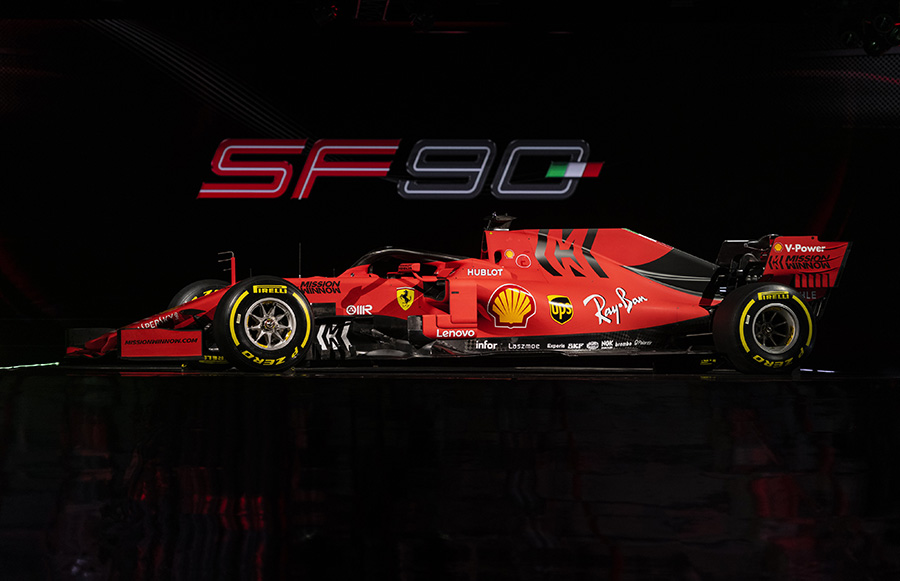 Frank-Steffen Walliser – Rendezvous in the Rain

Ferrari Grand Tour, A Journey Through Passion and Beauty Exhibition

London Concours – The Summer of the Ferrari Dino?