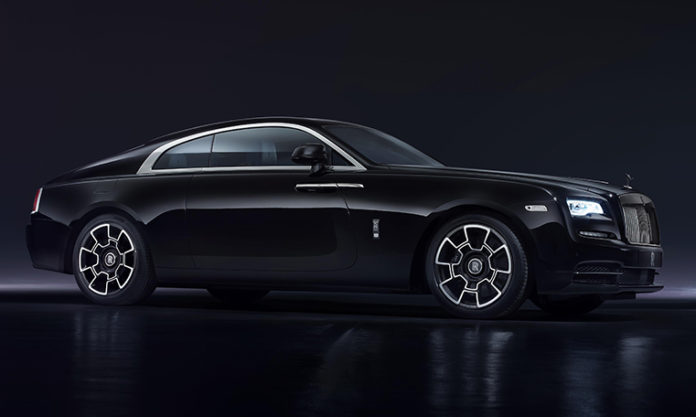 Rolls-Royce, the world’s leading luxury goods brand, made a stunning statement at the 17th Shanghai International Automobile Industry Exhibition (Auto Shanghai 2017) on 19 April with its Bespoke lineup, demonstrating its breadth of Bespoke luxury. On its stand, Rolls-Royce presented ‘Dawn – Inspired by Fashion’, the most social of super-luxury drophead motor cars; the darker and more edgy Wraith Black Badge and Ghost Black Badge; and an exclusive Bespoke model for the China market, Ghost Sartorial Collection.

“Rolls-Royce and the world of Haute Couture have long been bound by a common philosophy – taking the very finest materials and crafting them into the most exquisite and desirable luxury goods as expressions of our clients’ taste and lifestyle,” said Leon Li, Director of Rolls-Royce Motor Cars, China. 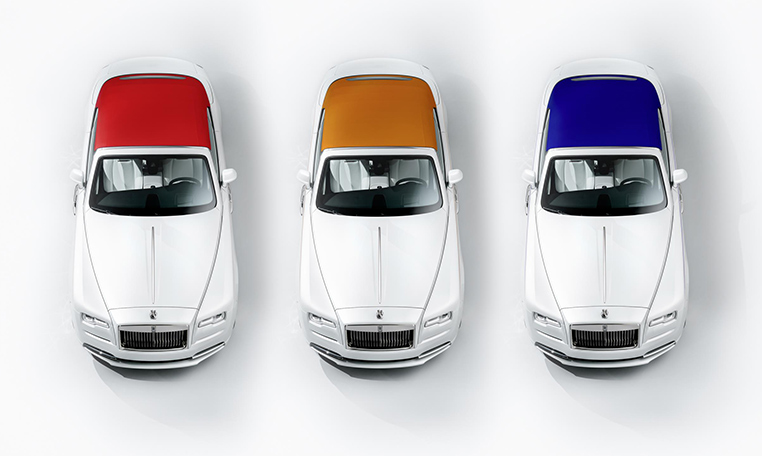 Under the stewardship of Design Director, Giles Taylor, Rolls-Royce Bespoke designers selected the palette of Andalucian White upon which to base three vibrant colours of the soft-top roof – Mugello Red, Cobalto Blue or Mandarin.

The special edition of ‘Dawn – Inspired by Fashion’ that Rolls-Royce presented at Auto Shanghai 2017 is in the Mugello Red colour scheme. On the outside, Dawn’s Andalucian White is beautifully accented by a Mugello Red coachline hand-painted by master craftsmen, reflecting the identical splash of colour provided when the soft-top roof is in place, just like the finest Bespoke garments.

The classic black and white colour scheme sets the tone for the interior of Dawn. Its exquisite dashboard is created in Piano White with aluminium particles resulting in a silk-like appearance, evoking the metallic fabrics seen on this year’s catwalks, whilst the car’s coachline, steering wheel, seats and door pockets are adorned in Mugello Red. The door pockets are lined with fine silks, featuring an abstract representation of the Spirit of Ecstasy with each emblem set precisely at 55 degrees to complement the lines of the door. 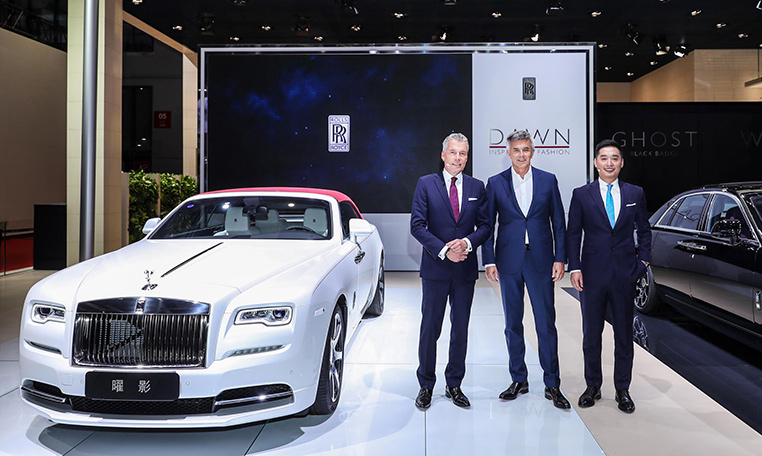 The contrast colour scheme used on ‘Dawn – Inspired by Fashion’ is the latest trend seen on many catwalks in London this year. The idea is to form an interesting combination of contrast colours that also complement each other. The inspiration comes from Neo-Plasticism, also known as De Stijl, evolved by Dutch Artist, Piet Mondrian, which is one of the three major schools of modernism design.

“Black Badge is a lifestyle statement that represents the alter-ego of Rolls-Royce. It’s made for the risk-takers and disruptors who break the rules and laugh in the face of convention. The patrons of Black Badge are driven by a restless spirit. They play hard and they change the world,” explained Torsten Müller-Ötvös, Chief Executive Officer of Rolls-Royce Motor Cars. 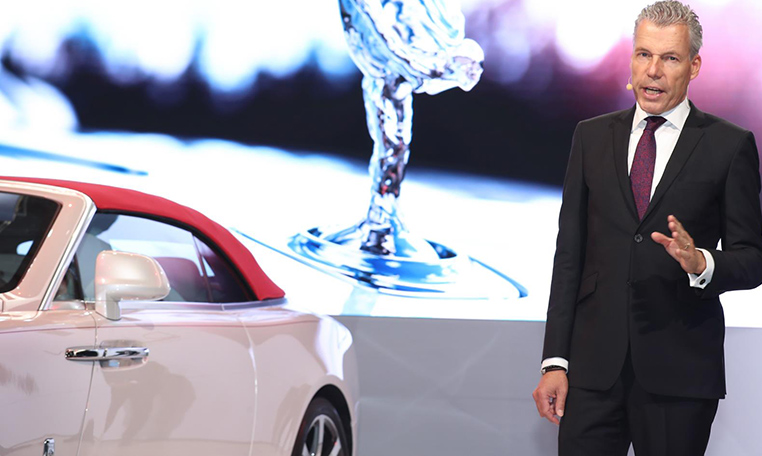 The Spirit of Ecstasy on Black Badge transforms into a dark vamp that leads the car into the night. The Double R badge on the prow, flanks and aft of every Black Badge motor car inverts from black on silver to silver on black, whilst chrome surfaces such as the front grille surround, boot lid finisher and exhaust pipes, turn dark.

Possibilities become limitless inside the Black Badge cabin as it is suffused with a darker re-interpretation of pure luxury and mystery, inspired by Rolls-Royce’s advanced materials and aerospace heritage. The centrepiece of the Black Badge cabin is the aerospace-grade aluminium-threaded carbon fibre composite surfacing material often seen on the surfaces of stealth aircraft. This futuristic material has been re-interpreted at Goodwood to become the world’s most innovative new super-luxury material.

Set into the car’s fascia is a newly created Black Badge clock whose hands are tipped in orange and whose face is adorned by the ‘Unlimited’ rating infinity logo. The logo previously appeared in the celebrated Phantom Drophead ‘Waterspeed’, created in 2014 to celebrate the world-speed record champion Sir Malcolm Campbell. It also now adorns the leather upholstery of Black Badge. In common with Campbell, the Black Badge owner’s attitude to apparent limits is to challenge or ignore them, a trait celebrated by the ‘Unlimited’ logo. 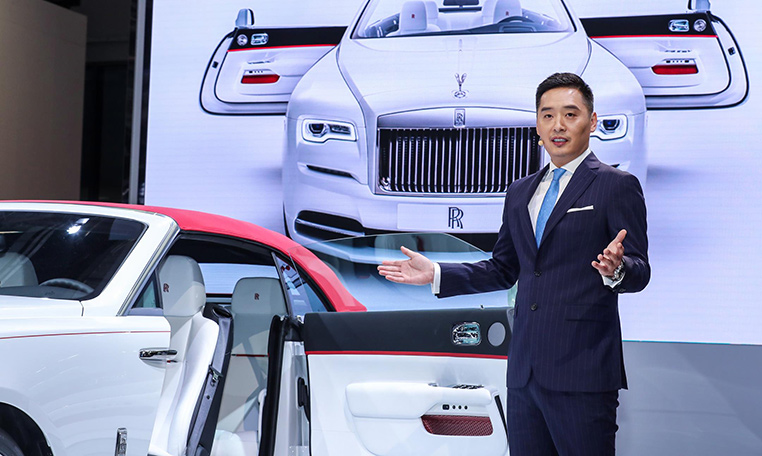 In addition, black leather combines with vibrant colours of Tailored Purple in Ghost Black Badge and Cobalto Blue in Wraith Black Badge, delivering a more edgy and modern feel to the cabin.

Regarding performance, Ghost Black Badge is equipped with a 6.6 litre V12 engine and 8-speed automatic transmission to make it a little more menacing compared to the current Ghost. Subtle engine output modifications see power increase by 30kW(40hp) to 450kW(603hp) and torque by 60Nm(840Nm).

Grace and mystery define the exterior presentation of Wraith Black Badge. The swept lines of the fastback, a style whose origins can be found in 1930s automotive design, most clearly signal its purposeful character. Already the most powerful and driver-focused car in Rolls-Royce’s model range, Wraith Black Badge has a maximum power at 465kW(624hp) and an amazing maximum torque at 870Nm. Again, upgrades to the 8-speed automatic transmission injects a level of added urgency in how Wraith Black Badge delivers its power. Rolls-Royce’s engineers worked earnestly to give this most phenomenal coupé an extra edge.

Rolls-Royce Offers 1:8 Scale Replica of Cullinan for Clients to Personalize

Each miniature Cullinan is handcrafted from over 1,000 individual components.
Read more
Automotive News

I've been looking around for the perfect model over the last week and I found her!
Read more
Automotive News

The Home of Rolls-Royce is producing the world’s most exclusive honey.
Read more
Lifestyle