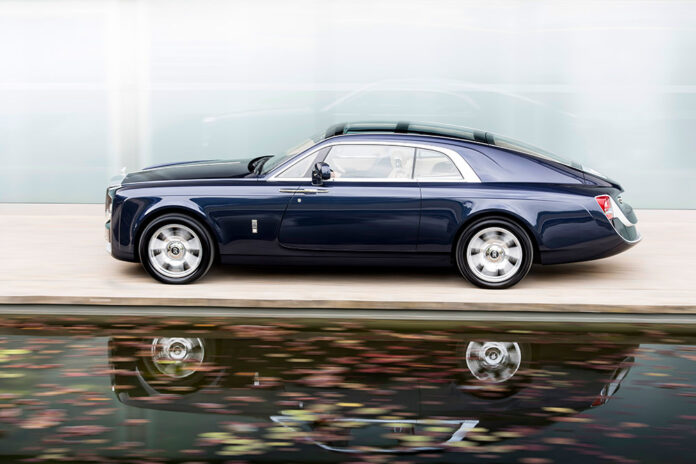 Coachbuilding is the art and science of creating bespoke bodywork on a pre-assembled chassis. It is as old as the motor car itself. All but extinguished by mass production, coachbuilding nonetheless lives on with Rolls-Royce at the forefront of its rejuvenation.

Drawing on more than a century of experience, and its unique Bespoke capabilities developed in the modern era, the marque has defined a new coachbuilding movement. Long accustomed to being able to commission every aspect of their motor cars’ appearance and specification, Rolls-Royce clients are increasingly seeking opportunities to reach beyond Bespoke and determine the motor car’s physical form.

Ahead of an official statement to be made imminently, we invite media to reflect on the marque’s rich coachbuilding heritage.

Coachbuilding and Rolls-Royce: A Brief History

As the 1920s dawned, mass-market car makers were bringing coachbuilding in-house, where engineers could address new issues presented by automotive use such as vibration and torsional stress.

Luxury marques like Rolls-Royce, however, continued to outsource coachwork to specialist houses for several more decades. A Rolls-Royce customer could still have a rolling chassis delivered to their chosen coachbuilder, who would design and build a car body to the client’s specific requirements – similar to ordering a suit from a Savile Row tailor, or a dress from a Paris couturier.

Until the 1930s, most coachbuilders remained true to long-established practice, which involved assembling a wooden frame, usually in ash, onto which aluminium or steel body panels were either pinned or welded. This allowed almost any shape to be created, with designs based around the interior space and fittings requested by the customer. As their experience grew, materials improved and motor cars’ speeds increased, coachbuilders adapted their methods, with later frames made from metal tubing or angle-iron.

This essentially traditional form of coachbuilding continued until the separate chassis was replaced by semi-monocoque construction, with sub-frames for the mechanical components. This process made all but the simplest of adaptations to the body design itself impossible. In the case of Rolls-Royce, this shift occurred in October 1965, when the Silver Cloud series was replaced by the Silver Shadow.

Contrary to popular belief, however, this did not mark the end of coachbuilding at Rolls-Royce. The Phantom VI, built on a separate chassis, remained in production, albeit in small numbers, until 1993, with coachwork supplied by Rolls-Royce subsidiary H. J. Mulliner, Park Ward Ltd.

Great Coachbuilt Rolls-Royce Cars of the Past

40/50HP Phantom I Brougham De Ville (1926)
The great coachbuilders paid as much attention to the interior as the exterior of the cars they created. Among the key elements were the instrument dials, which frequently transcended merely displaying essential information to become miniature works of art in their own right.

In 1926, the 40/50HP Phantom I Brougham De Ville, known as ‘The Phantom Of Love’, was built by Charles Clark & Son Ltd of Wolverhampton for Clarence Warren Gasque, an American businessman of French ancestry living in London, as a gift for his heiress wife, Maude. Gasque commissioned an interior to recreate the Rococo ambience of a salon in the Palace of Versailles, with polished satinwood veneer panelling, Aubusson tapestries and a painted ceiling inspired by a sedan chair owned by Marie Antoinette. It also included this remarkable French Ormolu clock, mounted on the partition between the front and rear cabins – an extraordinary detail that represents the pinnacle of the instrument maker’s art.

17EX (1928)
By 1925 Royce was concerned that the weight and size of some of the coachwork fitted to its chassis was affecting the cars’ performance – a fact its competitors gleefully seized upon. In response, Henry Royce built an experimental Phantom with an open, lightweight, highly streamlined body. Dubbed 10EX, this was the foundation for a series of cars that provided crucial new insights into overcoming air resistance and represented a giant leap forward in automotive design.

The fifth in the series, 17EX, was completed in January 1928. It was capable of speeds in excess of 90 miles per hour and, because Royce was adamant that even his experimental cars should look as good as any that bore his name, was finished in blue to the marque’s exacting standards.

In modern colour psychology, blue is associated with dependability, trust, stability and calm; it is also highly visible at speed, as demonstrated by the record-breaking cars and boats of Royce’s good friend, Sir Malcolm Campbell.

Phantom II Continental Drophead Coupé (1934)
Co-creation has always been at the heart of coachbuilding. Having commissioned a design for his or her perfect motor car, the customer worked with the designers and manufacturing specialists to produce a final design that was technically achievable. The coachwork would then be completed to the customer’s satisfaction.

This 1934 Phantom II Continental Drophead Coupé, designed by A F McNeil and built in London by Gurney Nutting & Co, is considered one of the most exotic and beautifully balanced examples of boat-tail coachwork ever created. The sweeping concave curves at the rear rise upwards to the razor-edging of the varnished rear decking. A design that has stood the test of time well, it remains a fine example of sporting elegance.

As a historical sidenote, McNeil’s protégée and successor, John Blatchley, was responsible for two of the most successful Rolls-Royce models of the 1950s, 60s and 70s, the Silver Cloud and Silver Shadow.

Phantom VI limousine (1972)
The Phantom VI was the last Rolls-Royce model to be constructed with a separate chassis, and was thus the swansong of the coachbuilder’s art. This example was designed and built by H. J. Mulliner, Park Ward Ltd, then a wholly-owned subsidiary of Rolls-Royce. Much like a modern-day Bespoke Collection car, it was based on the production model, but included numerous additional features specified by the customer. Indeed, so lavish and comprehensive were the enhancements that the marque produced a special promotional brochure for prospective patrons based on this motor car, highlighting the scope of its bespoke capabilities.

In addition to flower vases, a state-of-the-art sound and television system and a refrigerator for cooling wines and picnic food, the car was equipped with burled walnut picnic tables. Stored in the boot, these could be fixed to the front wings for alfresco dining; driver and passenger perched on a pair of ‘toadstool’ seats clipped to the front overriders.

Sweptail (2017)
In 2013, Rolls-Royce was commissioned to create a coachbuilt two-seater coupé featuring a large panoramic glass roof, inspired by the beautiful coachbuilt motor cars from the marque’s golden era in the 1920s and 1930s.

The first fully coachbuilt Rolls-Royce of the modern era, the car’s defining feature is the raked rear profile, the roof-line tapering in a sweeping gesture to a ‘bullet-tip’ that houses the centre brake light. The coachbuilt bodywork wraps under the car with no visible boundary to the surfaces like the hull of a racing yacht. The underside of the motor car describes a progressive upward arc at the rear departure angle, producing the swept tail that gives the car its name.

With its clean lines and grandeur, and contemporary, minimalist handcrafted interior, Sweptail caused an international sensation when it was revealed in 2017. Four years in the making, it is now regarded as a true modern classic and the world’s greatest two-seater intercontinental tourer.