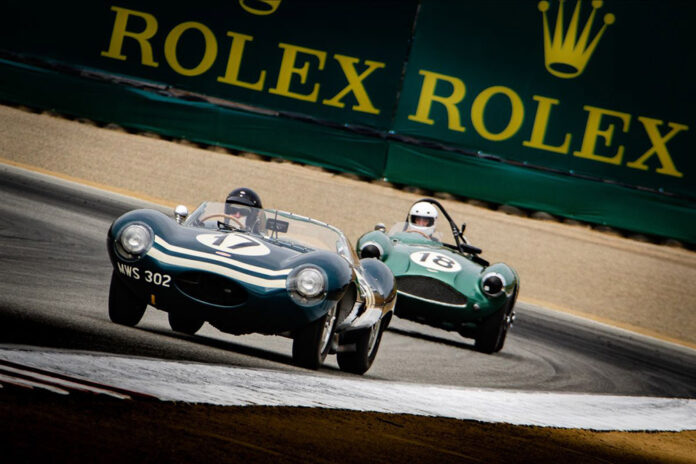 For years, old race cars were just that. Forgotten machines relegated to museums, private collections, left covered in dusty garages and even tucked away in barns. There wasn’t a calling to keep them running nor was there a suitable venue to safely exercise them.

That began to change in August 1974, when Steven Earle invited friends to “race” their cars. A small gathering of 60 cars rolled into the paddock of Monterey County’s 1.9-mile Laguna Seca road course where they were sorted into corresponding groups of type and speed. It was a light-hearted group of people who enjoyed racing their cars for sport rather than trophies in a Saturday event named the Monterey Historic Automobile Races that preceded Sunday’s Pebble Beach Concours d’Elegance. Thus, was the beginning of Monterey Car Week.

Over the years as more vintage race events emerged, race preparation and restoration shops flourished. Race cars were being bought and sold, and auction houses’ race car lots exploded. Naturally, so too did the value of many race cars. The subsequent increase spawned a new business opportunity of building continuation and replicas.

Each year since 1974, there has remained one underlying commonality with the entries being considered for acceptance into the 2010 rebranded Rolex Monterey Motorsports Reunion – they are “the real deal” – historically significant race cars from the past that are restored and prepared to their original period specifications. It is one of the only events left in the world that does not dilute or contaminate the event by admitting continuation or replica cars, and further accompanied by strict driving standards. That underlying principle remains the strict tenet by which each year’s Selection Committee is guided.

There are numerous events that accept continuation or replicas to race, or where road-going interpretations of their true stablemate are accepted. These events are enjoyed by owners as a way to drive their cars at speed. Yet the Rolex Monterey Motorsports Reunion is different. Drivers and fans expect the best of the best when strolling the paddock and watching them come alive on track doing exactly what they were built to do. Entrants of these significant cars rightfully do not want to share a track at speed with one that has no inherent value.

In recognition of this strict adherence, the Rolex Monterey Motorsports Reunion is the only U.S.-based event to win the prestigious Federation Internationale de L’Automobile (FIA) Founding Members Cup as Motorsport Event of the Year in 2017 for its “great significance to historic motoring.”

There are vintage race events occurring around the world nearly every weekend. While the distinction between vintage and historic may be subtle to some, it is paramount for Monterey. In fact, there have been past references, such as: there are cars, and then there are Monterey cars. Vintage typically refers to cars from the ‘20s through early ‘80s. For the Rolex Monterey Motorsports Reunion, cars must possess a level of authenticity and discernable pedigree, verifiable provenance of racing in the day, and have been cared for over time to be as authentic and true to the day they raced as possible. It is this historic nature that separates cars from club events or large vintage events where only the age of the car is considered for acceptance.

Old cars need attention, and it’s even more true for race cars. Accidents happen, parts break and over the years were routinely swapped among cars and the parts bin to do whatever it took to keep the machine in the race. The Rolex Monterey Motorsports Reunion abides by the philosophy of restoring the car to the point in time it raced, or preserved and maintained as it was, with enhancements coming only for driver safety.

For example, in 2010 the Rolex Monterey Motorsports Reunion featured the Bugatti Grand Prix. Thirty-four original Bugattis ranging from the 1924 Type 35C to the 1938 Type 57 arrived in Monterey from France, Germany, Australia, Japan and across the U.S. These were rolling pieces of art and varied from impeccably restored and flawless to the incredibly preserved paint-chipped, worn leather seats and scrapes acquired over the many years of racing. Visitors and historians applauded the owners who left the patina these preserved race cars carried as a badge of honor.

Selecting the final cars for acceptance and properly grouping them is a painstaking process. The Selection Committee appreciates the nuances between restoration and preservation as an important consideration when determining which cars are accepted. All of which makes the Rolex Monterey Motorsports Reunion one of a kind, just like the cars that rev to life in August.