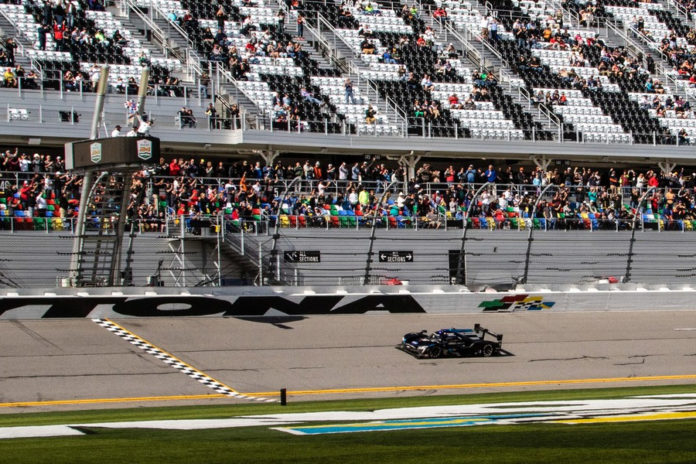 Records tumbled at this weekend’s Rolex 24 At DAYTONA, the 58th edition of North America’s most prestigious endurance race. The defending No. 10 Konica Minolta Cadillac DPi-V.R. clinched victory, completing an unprecedented 833 laps, equivalent to 2,965.48 miles (4,772.48 km), as the twice-around-the-clock challenge played out under clear skies. The conditions guaranteed that this test of durability, perseverance and endeavour was also a sprint race as the drivers pushed themselves and their machinery to the limit.

Renger van der Zande, Ryan Briscoe, Scott Dixon and Kamui Kobayashi shared driving duties for Wayne Taylor Racing’s No. 10 Cadillac and following victory van der Zande relished in his team’s success, saying: “It was fantastic, the best car I have ever driven at Daytona, you could push every lap and that made it very special. It is an honour to race and work with some of the finest drivers in the world, including Scott Dixon this year and Fernando Alonso in 2019. A Rolex watch is the best trophy you can receive, and to take it home to my family makes me especially proud. I now have two watches to pass on to my two children, I’m extremely happy.” In recognition of Rolex’s enduring relationship with Daytona Beach – dating back almost 90 years to Sir Malcolm Campbell’s land speed records – as well as its commitment to excellence, the Swiss watch brand awards the winning drivers with a Rolex Oyster Perpetual Cosmograph Daytona.

The race started at 13:40 local time on Saturday 25 January when the No. 77 Mazda Team Joest DPi led the 38-car field under the green flag. The No. 77 initially built a lead over the field, but as darkness fell, the No.10 set the pace. The team’s win was twice threatened as penalties dropped the Cadillac down the order but the drivers continued to extract the maximum, taking it in turns to set the fastest lap of the race; van der Zande ultimately clocked a 1:34.652 during his impressive night shift.

The No. 24 BMW Team RLL won the GT Le Mans (GTLM) category ahead of the No. 912 Porsche GT Team in another closely fought competition. The No. 24 BMW and the sister No. 912 and No. 911 Porsche cars were in contention from start to finish, often separated by less than a second. Finally, in the closing laps, the BMW secured victory, while the Porsche cars had to settle for the runner-up positions. In the Le Mans Prototype 2 (LMP2) category, after a strong start from the No. 52 PR1 Mathiasen Motorsports pole car, its lead gradually faded and the No. 81 DragonSpeed USA cruised to the class victory. Lamborghini claimed a dominant one-two in the GT Daytona (GTD) competition.

The Florida sun shone on Daytona International Speedway® throughout the weekend, in stark contrast to a year ago when the race finished under the red flag after heavy rain. These perfect conditions allowed the drivers to test the boundaries of their car and their own human resilience, resulting in a relentless pace and the longest green flag period since records began (7 hours, 48 minutes and 28 seconds). The Rolex 24 At DAYTONA is revered for attracting the world’s best drivers as knowledge and expertise is shared across motor racing disciplines in this long-standing event.

Ahead of the race on Friday, IMSA (International Motor Sport Association) and the ACO (Automobile Club de l’Ouest) announced the creation of a leading category that will contest both the Rolex 24 At DAYTONA and the 24 Hours of Le Mans. Marking a new collaborative era in endurance racing, the LMDh (Le Mans Daytona H) class will bring the finest racing to the most prestigious events around the world from 2021.