A Passage Through Time: Porsche Speedster 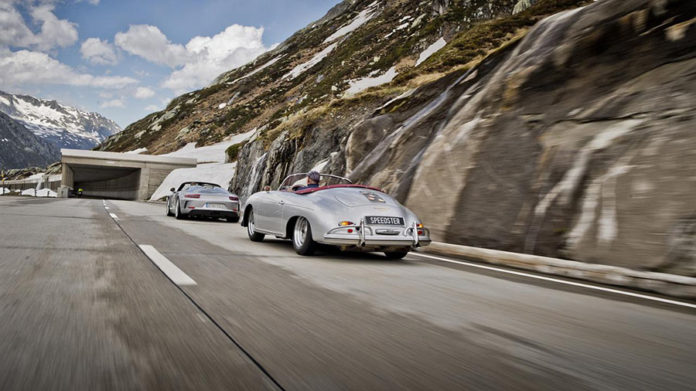 The complex history of the Gotthard Pass also tells the story of human mobility. In the first centuries after the Schöllenen Gorge opened, around the year 1200, traders and pilgrims still crossed the pass on foot. But as demand for traded goods increased, the bridle paths were systematically expanded and made suitable for horses and oxen. The first roads over the Gotthard appeared in the 1830s, ushering in the era of the stagecoach, but this was cut short in 1882 when the Gotthard Railway began operating through the newly built tunnel. 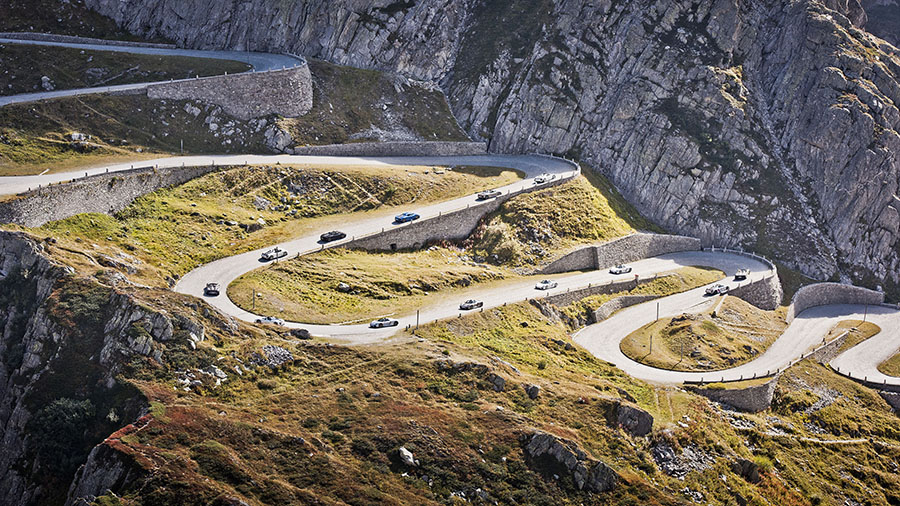 It wasn’t until the early 20th century that the first motorists appeared on the pass, and the road underwent further improvements to cater for them. With the boom in individual transport and mass tourism in the 1940s and 1950s, the Gotthard Road was developed once again into its current form. And by 1980, the first road tunnel through the Gotthard massif had shortened what had once been an arduous, multi-day journey through the Alps into a mere 15-minute drive.

Today, from behind the wheel, the Gotthard acts as a sort of giant open-air museum containing over 800 years of culture and industry, where the winding trails that once clung precariously to the Alpine topography have evolved over the centuries to become mighty feats of engineering and architecture, ever faster and more efficient. 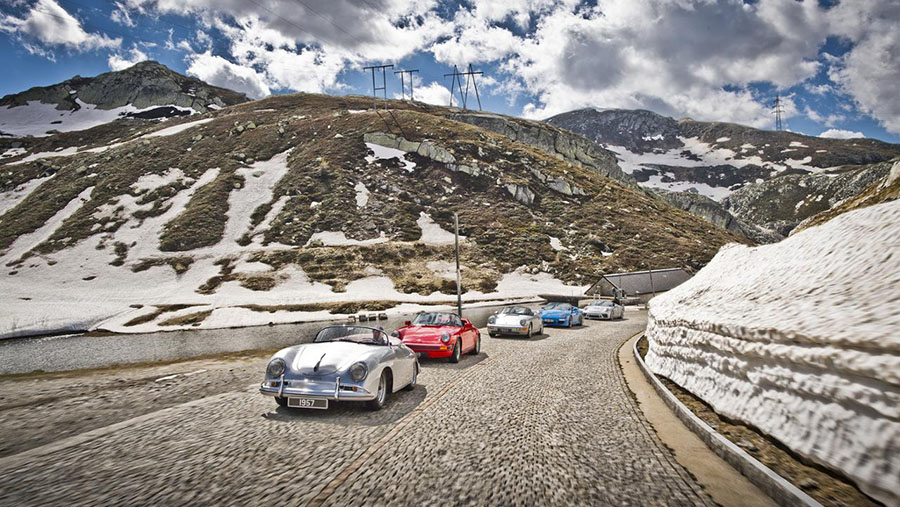 Perhaps it’s a little ironic that we now haunt these old routes in stiffly-sprung sports cars with the express desire of reliving the challenges of that once-feared and exhausting journey. The famous Devil’s Bridge or the serpentine zigzag of the Tremola, built simply to shorten the travel time between the north and south, are now sought out to be savoured, time and again.

The locals of old would have shaken their heads in disbelief. But it is this modern yearning for unfiltered experiences that calls us to the Gotthard today, sees us slip behind the wheel of a 356 Speedster, whose unapologetic minimalism brings us so close to the pass and to the mountain itself. And it is the roar of induction, the smell of petrol, the feel through the wheel, transmission and brakes, which finds us firing up a 911 Carrera RS and a 906, and pointing them towards the pass. 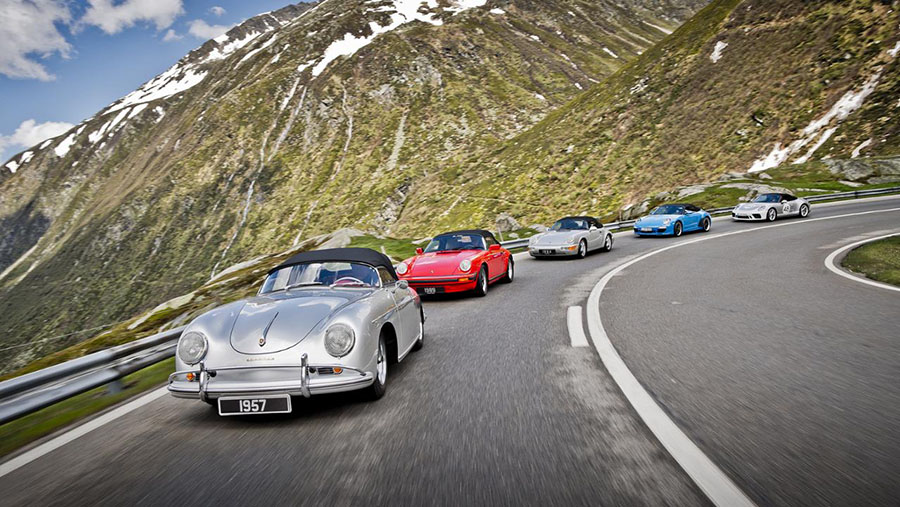 Just as raw and responsive, elemental, essential, the new 991 Speedster bookends this priceless cavalcade, its GT underpinnings and chopped down profile the perfect access point to the sensory overload of this alpine assault.

At the wheel of the lightweight and nimble classics, you get a sense of how it must have felt even 50 years ago to travel south across the Gotthard: the climb through the wild Schöllenen Gorge, the sudden expanse of the Urner Valley landscape, and finally, the first signs of Italy as you wind your way down into the valleys of Ticino. 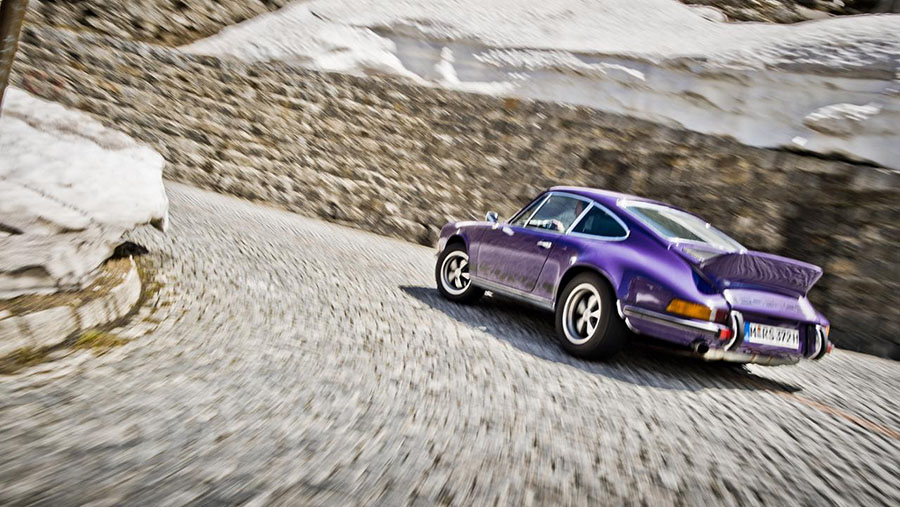 But switch from the simpler air-cooled cars into the latest 911 Speedster and the nostalgia of traversing the pass in slow-motion is erased by an unrecognisable level of performance. Devouring the pass, 4.0-litre flat-six hollering behind your head, the modern Speedster flattens the mountain beneath apparently limitless reserves of power, of instant acceleration and crisp, clinical braking.

Yet, be it a cherished museum piece or the GT department’s cutting-edge future classic, the most profound rewards of the pass come not from thrashing the limits of physics, but rather through reading the landscape with the help of a machine apparently created precisely for that purpose. 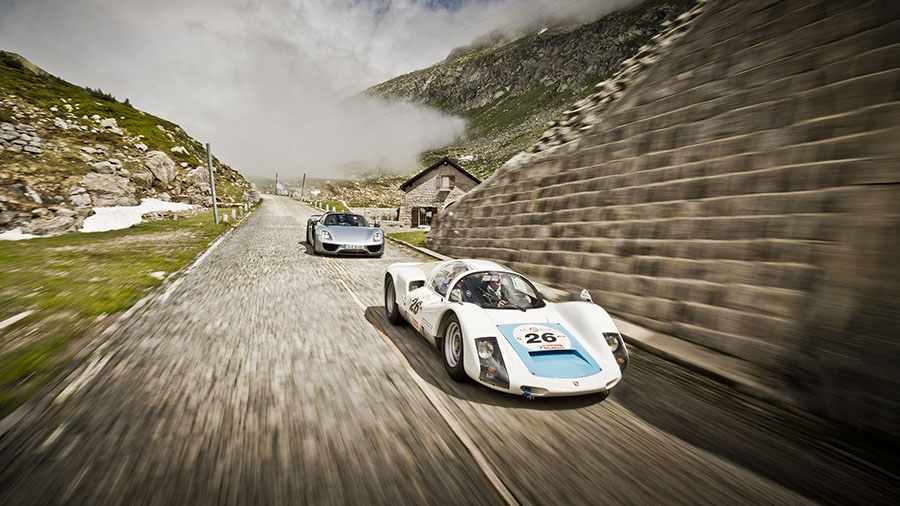 The history of the Gotthard Pass is rich with motive imagery, of our forebears on their gruelling trek through the Schöllenen Gorge; of the yellow stagecoach of the Swiss Post at full gallop through the curves of the Tremola. It conjures the sounds and smells of the black steam locomotive chugging through the spiral tunnels above Wassen, and the first motorists emerging from the clouds of their own dust trails. It reminds us how the thundering military convoys on their way to the Redoubt gave way to the post-war tourist buses en route to sunny Italian coasts.

One day, even the 911 Speedster will be no more than a hazy memory, a nostalgic image of a by-gone era and another footnote in the long and illustrious story of the Gotthard. But for now it is reality undiluted by time. Visceral, emotional, the perfect way to pass.