The Pagani Huayra Tricolore is Ready to Take Off 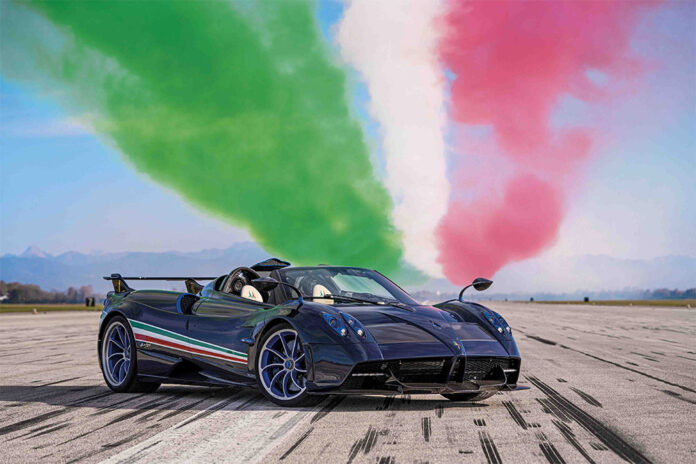 On the occasion of the 60th anniversary of the Frecce Tricolori, Pagani Automobili is pleased to present the Pagani Huayra Tricolore. Only three examples will be built as a tribute to the Italian Air Force Aerobatic Team. The 313th Aerobatic Training Group – the official name of the Italian Air Force Department founded on 1 March 1961 at the Rivolto military base – better known as the National Aerobatic Patrol (Pattuglia Acrobatica Nazionale, P.A.N.) or the Frecce Tricolori, is heir to an all-Italian tradition of collective aerobatics with roots that go all the way back to the 1920s.

With their ten Aermacchi MB-339A P.A.N. jets, nine flying in formation and one solo, the Frecce Tricolori are one of the most famous aerobatic patrols in the world. They have dazzled an international audience of spectators for over half a century with their unparalleled aerobatics, demonstrating the dexterity and skill of which only the best pilots are capable. In fact, the flight of these ten aircraft represents a combination of perfection, discipline and the highest professionalism, the quintessence of group unity but also a sense of beauty. Theirs is a single mission: to display the tricolour of the Italian flag across the skies. In 2010, Pagani paid tribute to 50 years of such excellence by presenting the Zonda Tricolore, a Hypercar of which only three examples were made. Today it is one of the most exclusive and sought-after Zonda models in circulation. In 2020, the Frecce Tricolori reach their 60th anniversary and Pagani is about to celebrate this new milestone by adding another piece to a mosaic created from passion, tradition and the spirit of collaboration.

“In a year, 2020, which has put our country to the test like never before, we are proud to be able to celebrate a symbol of unity and national pride such as the Frecce Tricolori, a milestone that has emerged from an era of values and passion, and a long period of time in which men and machines were able and had to surpass themselves, day after day. For all of us, the Frecce represent an example of determination, a demonstration of what the strong desire to move forward and overcome obstacles can achieve. We hope that Huayra Tricolore will be a worthy tribute” Horacio Pagani, Founder and Chief Designer of Pagani Automobili.

Created in an ultra-limited edition, the Huayra Tricolore evokes the unmistakable lines of the air patrol’s Aermacchi jets and combines, in every detail, aeronautical science and the elegance of form, once again pushing the concept of an ultra high performance car another step forward.

The inspiration: the Aermacchi MB-339A P.A.N.

Knowing how to fly in formation requires great skill on the part of pilots, but above all extreme discipline and extensive training. Even more than this, it implies the ability for excellent teamwork. Throughout history, right from the initial training practices, aerobatics has also served to demonstrate the skills of pilots and aircraft, the technological knowledge and the skills of men who designed new flight manoeuvres. Working well at the highest level is today the core identity of the Air Force’s aerobatic group, whose squadron flies jet aircraft capable of a speed of 898 km/h above sea level and able to perform the most extreme manoeuvres in the Frecce Tricolori aerobatic repertoire, thanks to their ingenious design. In some very low speed figures, in fact, the advanced aerodynamics of the MB-339A means the powerful aircraft will never stall and enables its engine to collaborate even in the most complex and risky manoeuvres. Creating a car that is safe and reliable in all conditions is one of the key objectives of the design and development of every Pagani project, and the design flair of an aircraft like the MB-339A of the National Aerobatic Patrol has, from this point of view and many others, been an enormous source of inspiration for the development of Huayra Tricolore. From the new body made from advanced composite materials, specially designed and developed to reach new targets in terms of lightness and performance, to the development of a new, more updated version of the powerful Pagani V12 and the application of aeronautics-derived technologies, materials and production processes: in every aspect and in the most minute detail the Huayra Tricolore echoes the unmistakable design of the Frecce Tricolori planes and reflects their concepts of style, as a tribute to the aerobatic flight group that has painted skies around the world with the tricolour for the last 60 years.

The Pagani Huayra R – Most Extreme Pagani Hypercar Exclusively for Track U...

Manny Khoshbin Tries Out the Launch Control in His Hermes Pagani Huayra!

Flat Out in the PAGANI HUAYRA BC on Track! – Shmee150