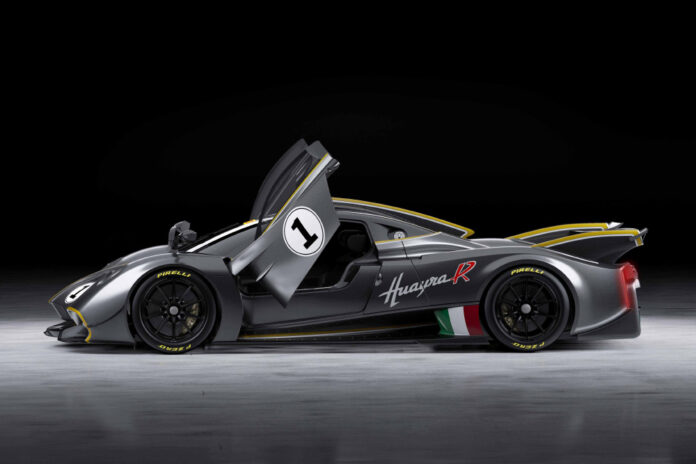 On the wings of a wind that blows ever-stronger, the Huayra R is released to express its full character in total freedom. Pure, passionate, mighty and captivating. It knows no limits.
The new track-focused Hypercar from Pagani combines the highest level of automotive engineering and aerodynamic know-how with unprecedented aesthetic sensitivity in an exercise of style that represents the full expression of Pagani Automobili’s technological development.

What is freedom, if not the courage to dream and choose to surpass oneself and one’s limits, the need to express an emotion that refuses to be constrained? A concept that by its very nature escapes definition and labels, but which has always deeply moved the human spirit and determined its needs and intuitions.

The profound need for creative freedom at the heart of the Huayra R is embodied by the clean lines and timeless appeal of the Le Mans and World Sports-Prototype Championship cars of the 1960s and 1970s. Symbols of freedom par excellence and protagonists of an era of motorsport that was synonymous with battles and tension, tears and triumphs, ecstasy and sweat; endurance races that turned drivers into heroes and sensational cars into eternal legends. This concept of freedom and purity inspires the bold lines of the Huayra R, a quintessential celebration of performance, technology and art applied to a track car.

“Today’s racing cars are focused exclusively on aerodynamics and are largely the product of the wind tunnel. In the 60s and 70s, however, the cars were very fast, certainly dangerous, but beautiful. Prototype sports cars like the Ferrari P4 or the Ford GT40, or the Le Mans cars, had extremely attractive lines, which are still a huge source of inspiration for our cars today. The Porsche 917 is my favourite, with its romantic yet bold shape, which gives the impression of a very fast car. It is beautiful, elegant and timeless. From this desire for freedom, and from the experience of the Zonda R and the cars of the past, came the idea of the Huayra R, like a breath of fresh air.” Horacio Pagani

The Huayra R is a celebration of passion – an extreme, untamed car, developed free from rules except for safety, with the sole aim of offering uncompromising performance. But first and foremost, it was designed to excite.

From tradition to innovation

“Creativity is the result of curiosity and the quest for something that does not exist.”

Taking up increasingly demanding challenges in order to define new goals and pushing new boundaries to test one’s ability has been in the DNA of Pagani Automobili from the very start. This is what happened towards the end of the 2000s when an exciting new project landed on the Atelier’s doorstep and triggered an unprecedented journey of research to create the first Pagani track car, a car that Horacio Pagani thought should incorporate the best racing technology of the time, combined with the beauty and attention to detail typical of all of the brand’s creations.

The Zonda R, created with cutting-edge materials derived from the aerospace industry and from F1, was presented at the Geneva Motor Show in 2009 where, under its refined, but bare natural carbon fiber surface, it embodied the pinnacle of Pagani Automobili technological development, combined with unprecedented attention to aesthetics for a track car. Offering a driving experience and performance simply impossible on the road, the Zonda R demonstrated its full potential, attaining major milestones on the world’s most prestigious circuits and was celebrated on many covers of the main magazines of that time.

Deeply inspired by its racing predecessors, after more than ten years, the Huayra R is reintroducing that same bold and audacious essence, once again combining maximum technical refinement and attention to detail, in a car of outstanding personality that incorporates the technology of Pagani cars of the future. And like all the creations of the Atelier, it is made to measure.

“In 2008 we were working on the Huayra, a very challenging and demanding project from an engineering and stylistic point of view. After so many years, I felt an overwhelming desire for freedom and that’s how the Zonda R came about, a track car free from constraints and regulations. Beautiful, high-performing and safe. The Huayra R, just like the Zonda R, is the freest, most extreme and performance-oriented Pagani car of all time.” Horacio Pagani

Driving the Huayra BC Roadster with Christopher Pagani!!!