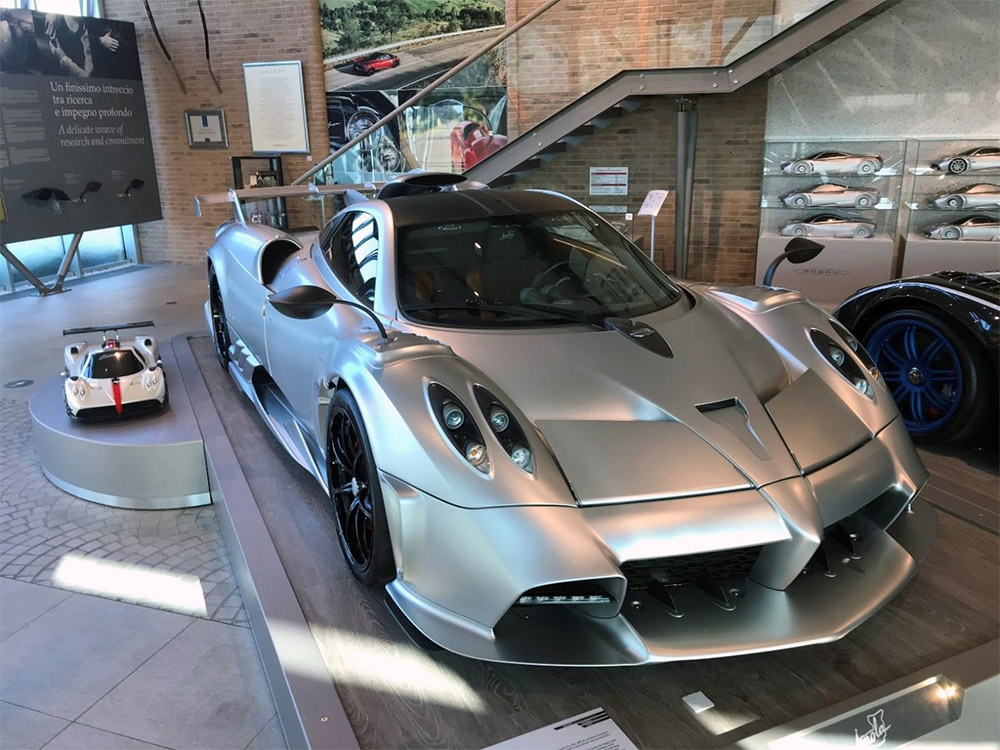 “Parmesan” cheese isn’t just a generic branding exercise that came from a powerpoint presentation. It comes from the Parma and Reggiano regions in Italy’s Emilia-Romagna region. Grapes from the same region are not destined for wine glasses, but rather a separate aging process to produce balsamic vinegar. Centuries of culinary tradition has made the area internationally renowned. Neither cheese or vinegar are made quickly – both require refinement, craftsmanship and age. 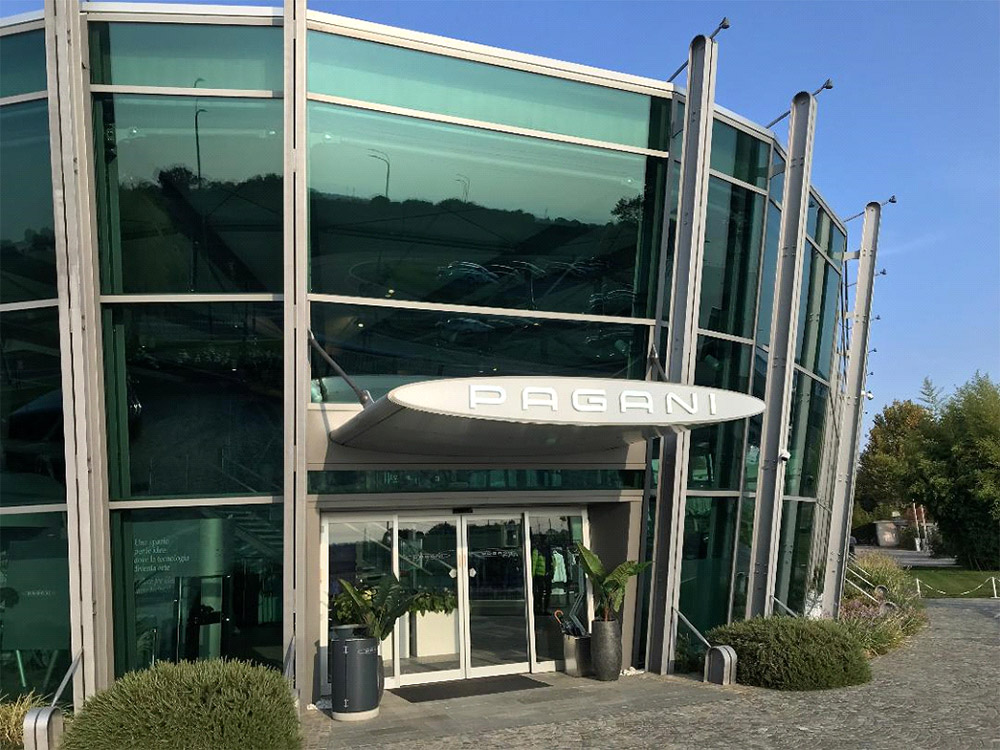 Traffic moving through the countryside might miss the small road sign with six yellow letters enclosed in an elongated flat oval. Those who follow the sign to Pagani Automobili, however, are rewarded with a history lesson of hypercar four wheeled flavor. 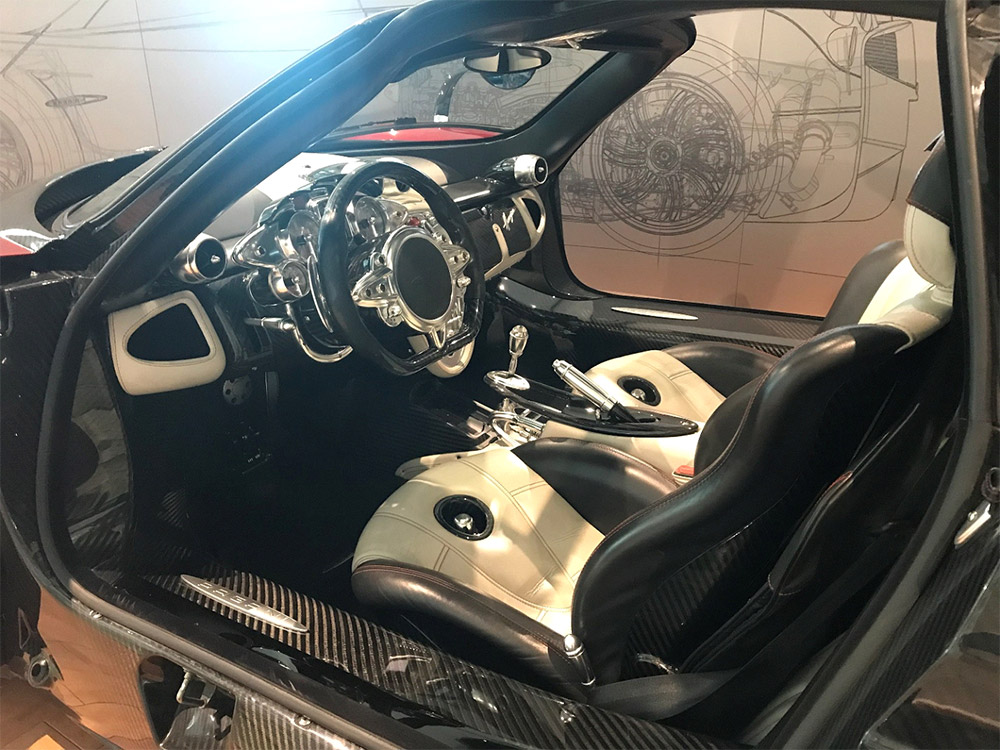 Pagani is headquartered in a small cluster of industrial buildings amidst acres of flat farmland. In contrast to the years that fine cheese and balsamic vinegar require, Pagani’s mission is measured by the stopwatch and speedometer. Founder Horacio Pagani and his team pursue speed but do so with delicate and detailed designs that have made the marque famous. The overused cliché of a Pagani as rolling art is more than a cliché. Pagani has only been in business for thirty years, but it has been an impactful three decades. 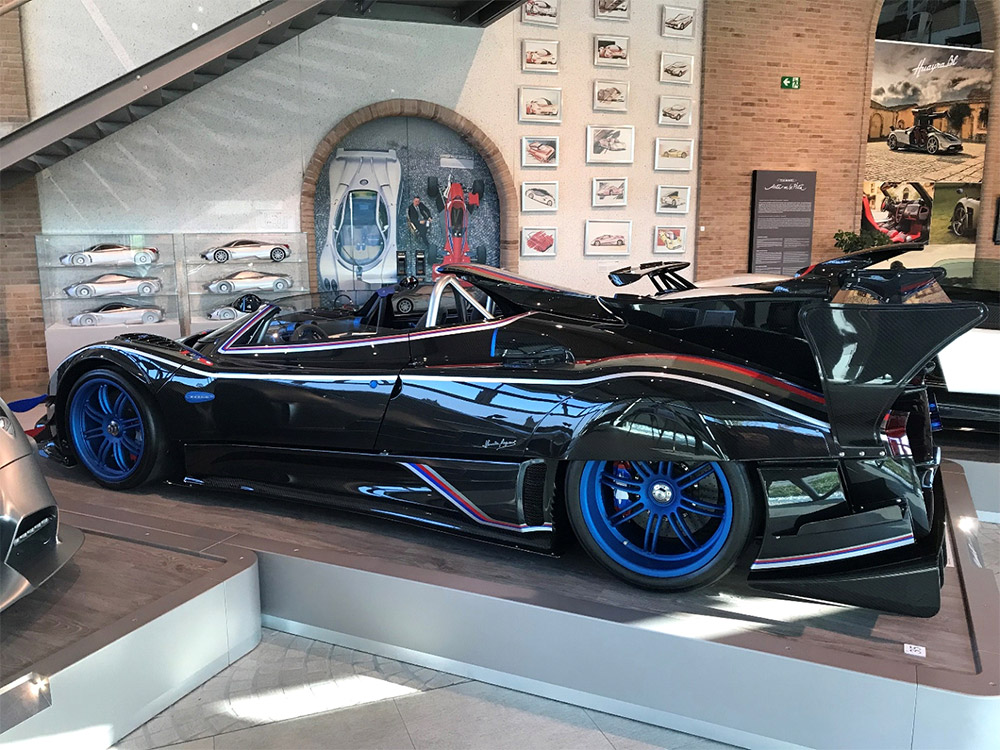 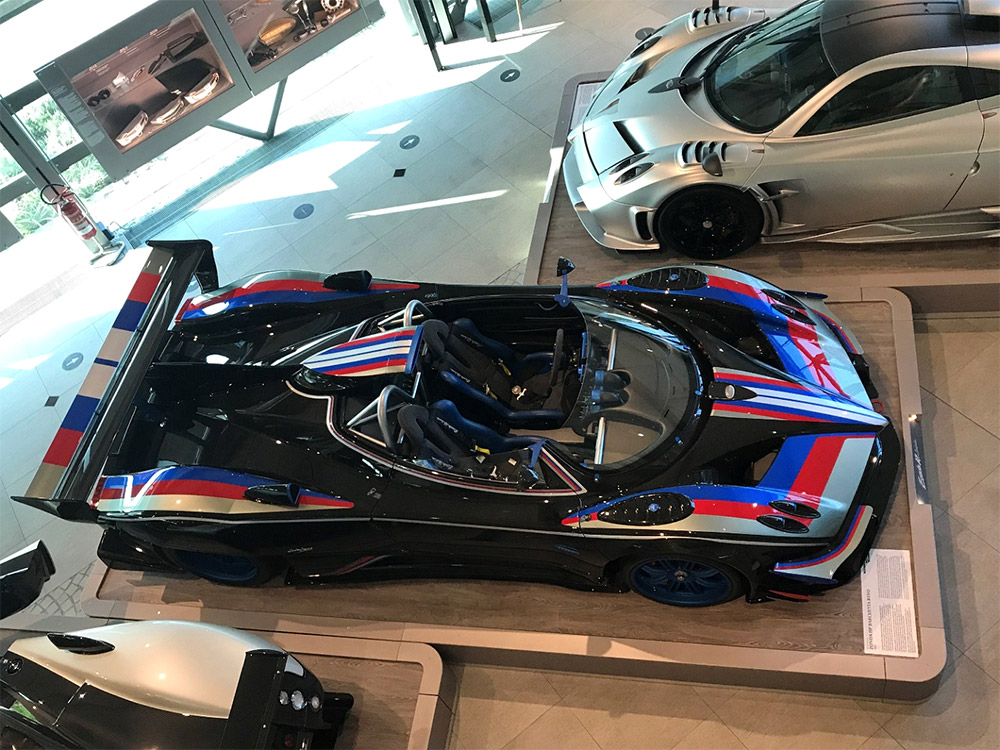 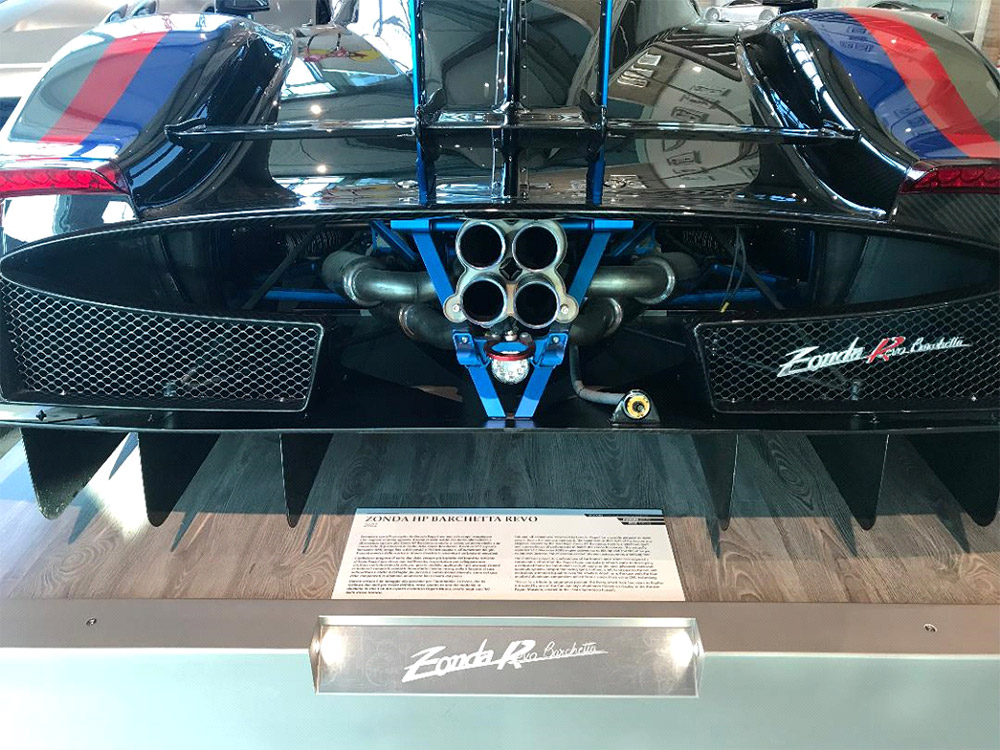 Guests need no advance appointment but there is an entry fee for the museum collection of Pagani history. Those with more time can upgrade to a factory tour. No entry fee is required to wander through the gift shop with trinkets and clothes and other Pagani designed souvenirs. 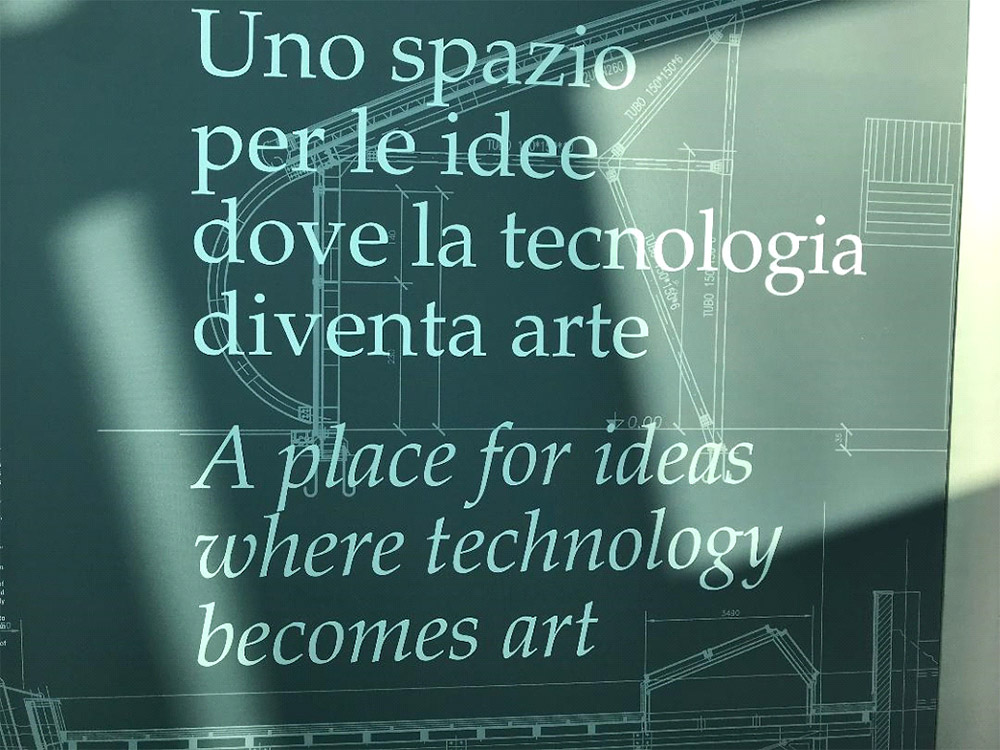 The sign inside the front door proclaims the facility is “A place for ideas where technology becomes art.” Horacio Pagani not only spearheads the car design, but the museum building came from his sketchpad as well. Inspired by Leonardo da Vinci and Gustave Eiffel (of Eiffel tower fame), the building features soaring arches and large windows and blends metal, glass and brick. It fittingly aligns the building aesthetic with the automobiles housed within. 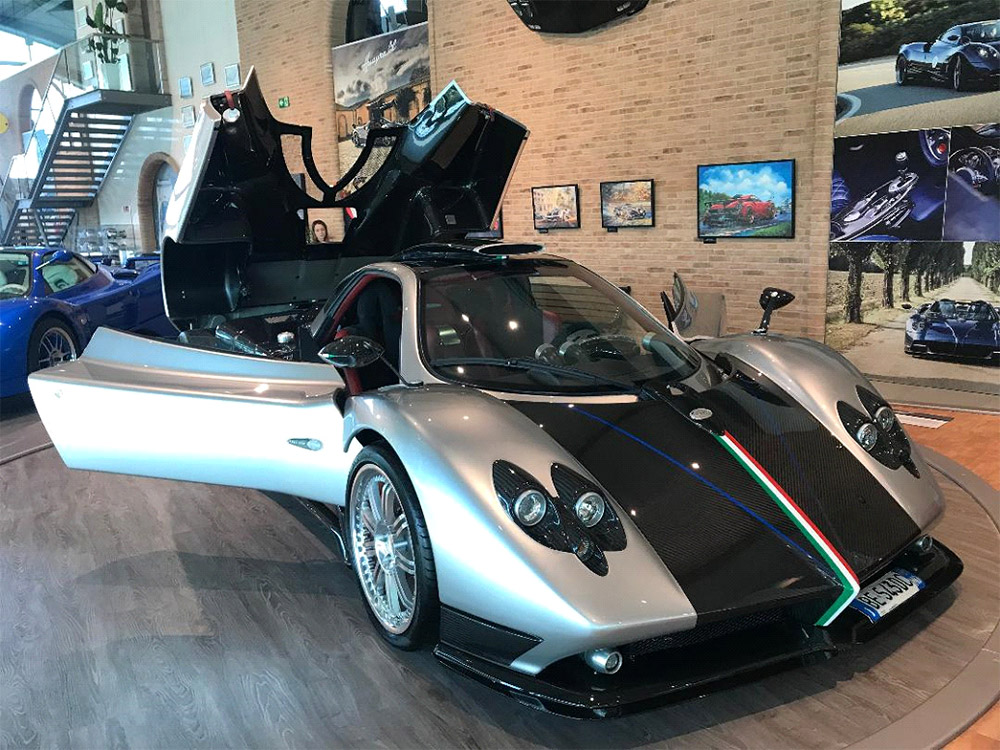 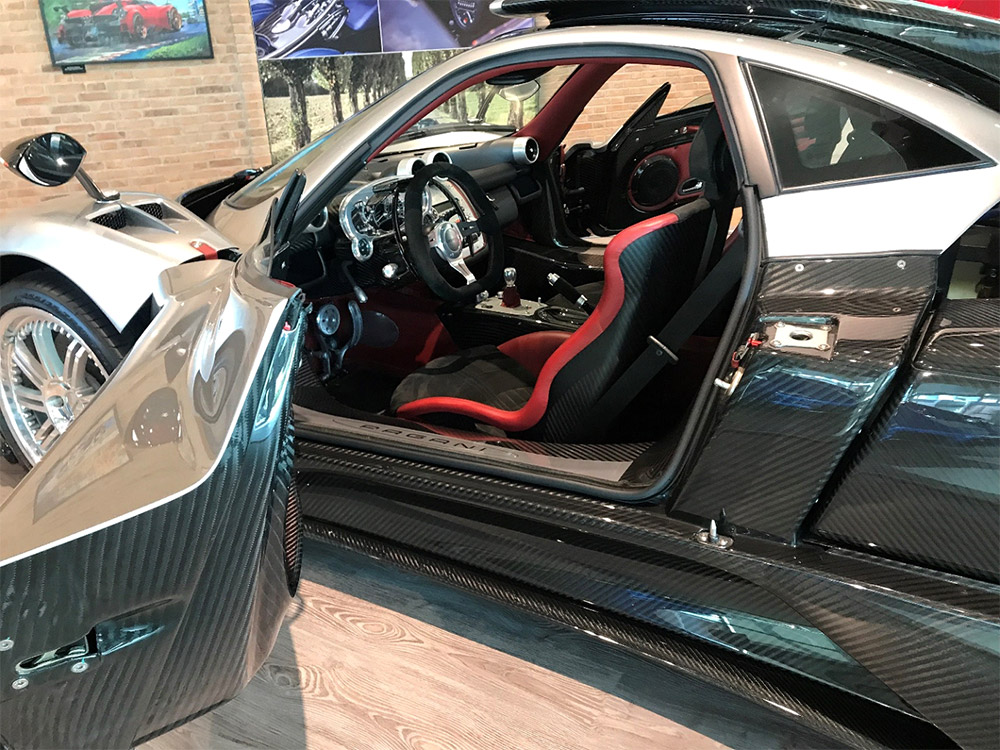 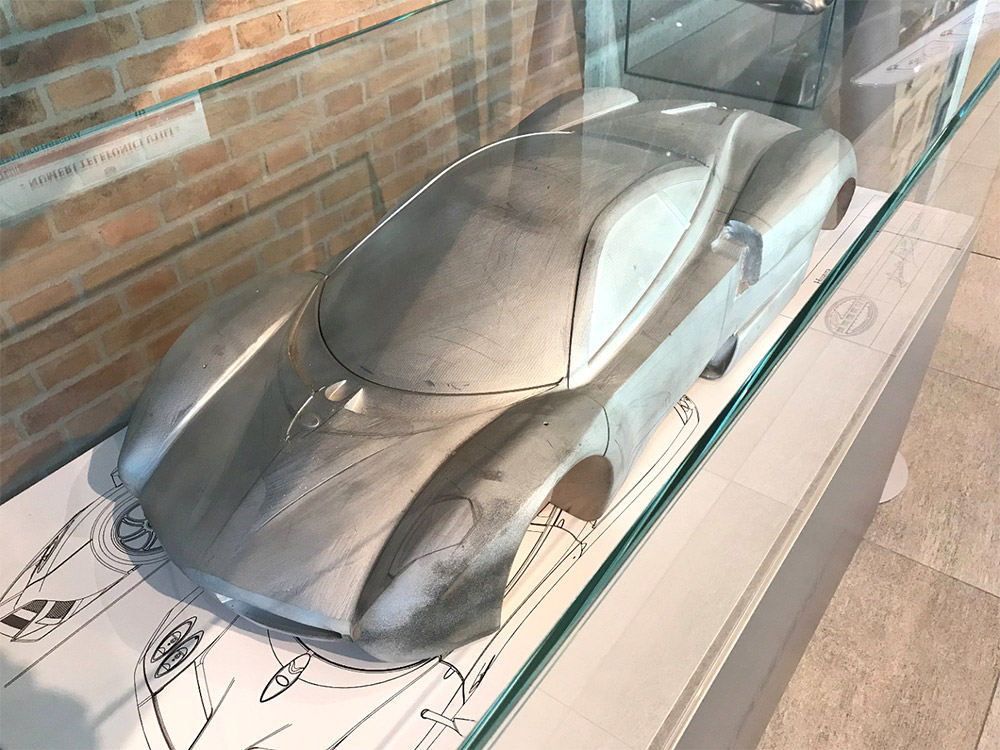 Horacio Pagani began life in rural Argentina before finding his way to Italy as a young man. A relentless spirit, Pagani tinkered with go-karts and designed his own F2 single-seater race car in Argentina. 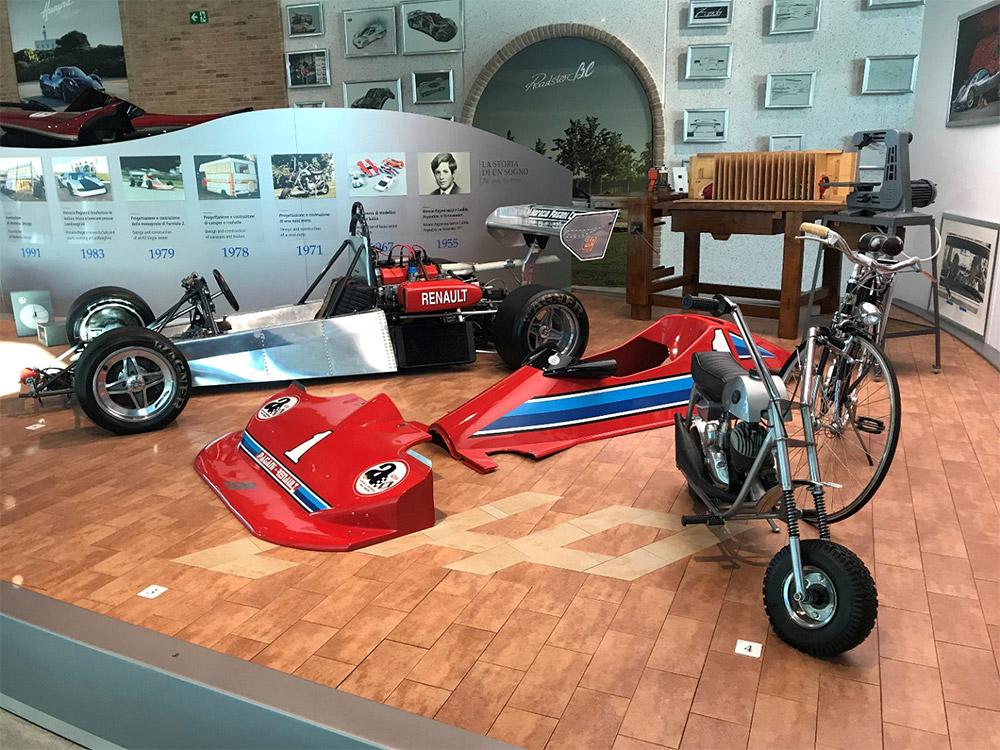 In 1982, he left Argentina, knocked on doors in Italy, and ended up at Lamborghini. It was a perilous time at Lamborghini. He started humble, literally sweeping floors. He worked in the body shop which also introduced him to composites and carbon fiber. He quickly progressed and apparently impressed the Italians who tasked him to design the 25th anniversary version of the Countach. 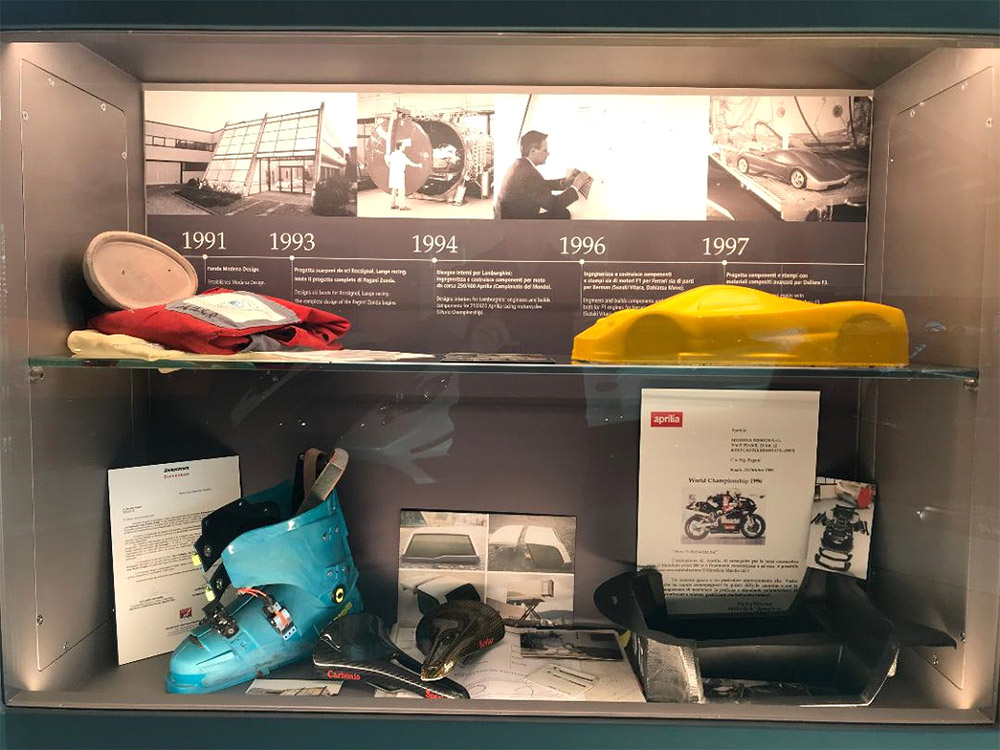 Splitting with Lamborghini in 1991 after they balked at Pagani’s desire to pursue carbon fiber and composite technology, he started his own firm and became an expert supplier of carbon fiber parts to clients such as the Ferrari Formula One team. He set out to design his own car, now armed with knowledge and experience at the cutting edge of composite design and construction. 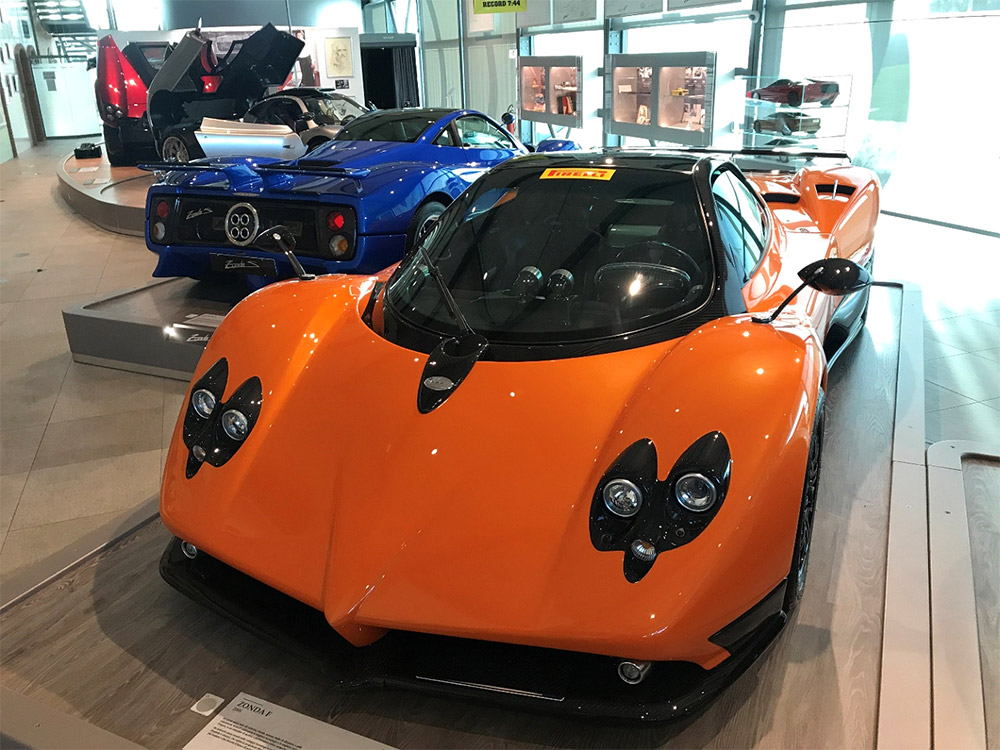 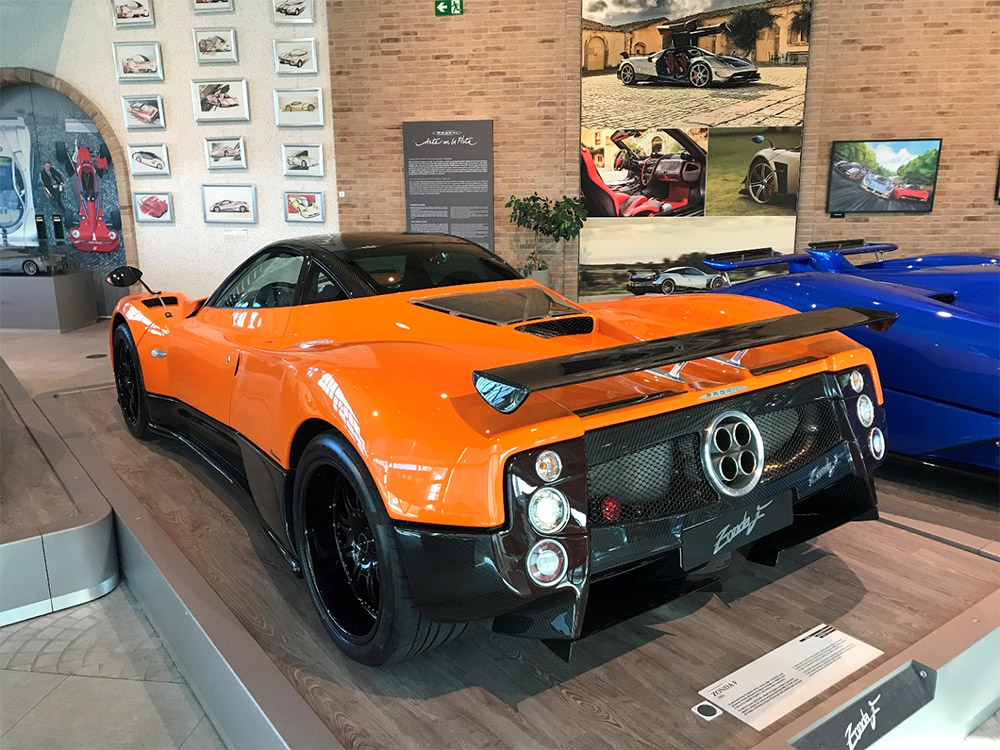 Countryman and legendary racer Juan Manuel Fangio played a significant part in the Pagani story. Suitably impressed with the F2 racer, Fangio gave Pagani letters of introduction to help his move to Italy. Years later, when Pagani was designing his own supercar, Fangio was there to provide support and input. Fangio also made introductions that resulted in Mercedes AMG twelve-cylinder power becoming part of the Pagani formula. Pagani planned to name his car the Fangio F1 in honor of his friend and mentor, but changed the name to Zonda when Fangio passed away. 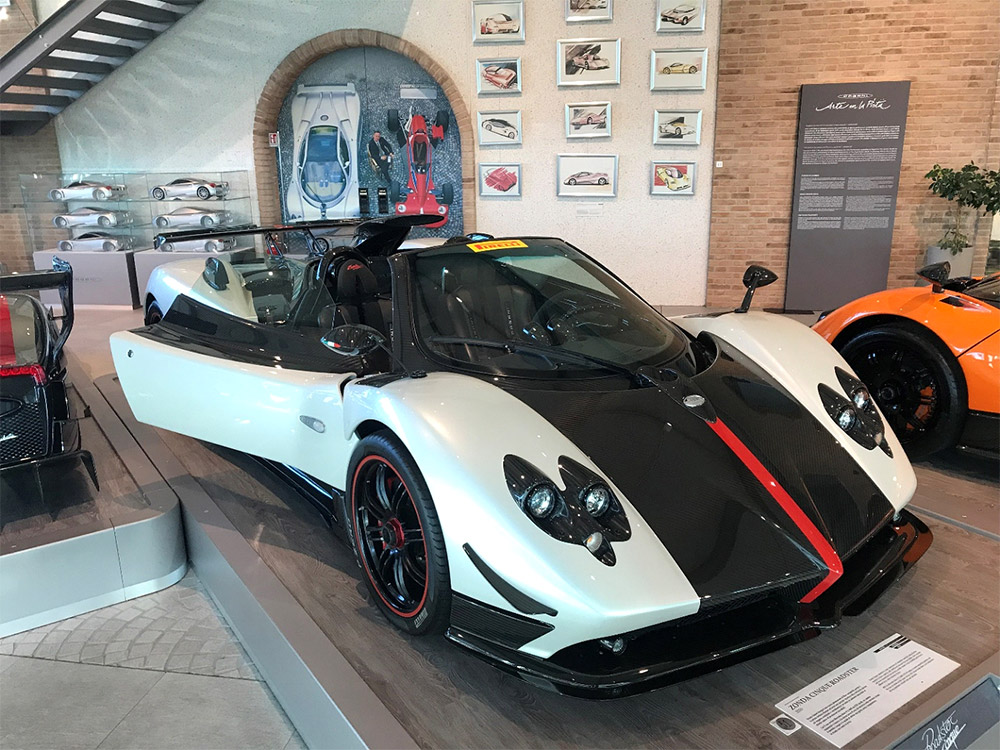 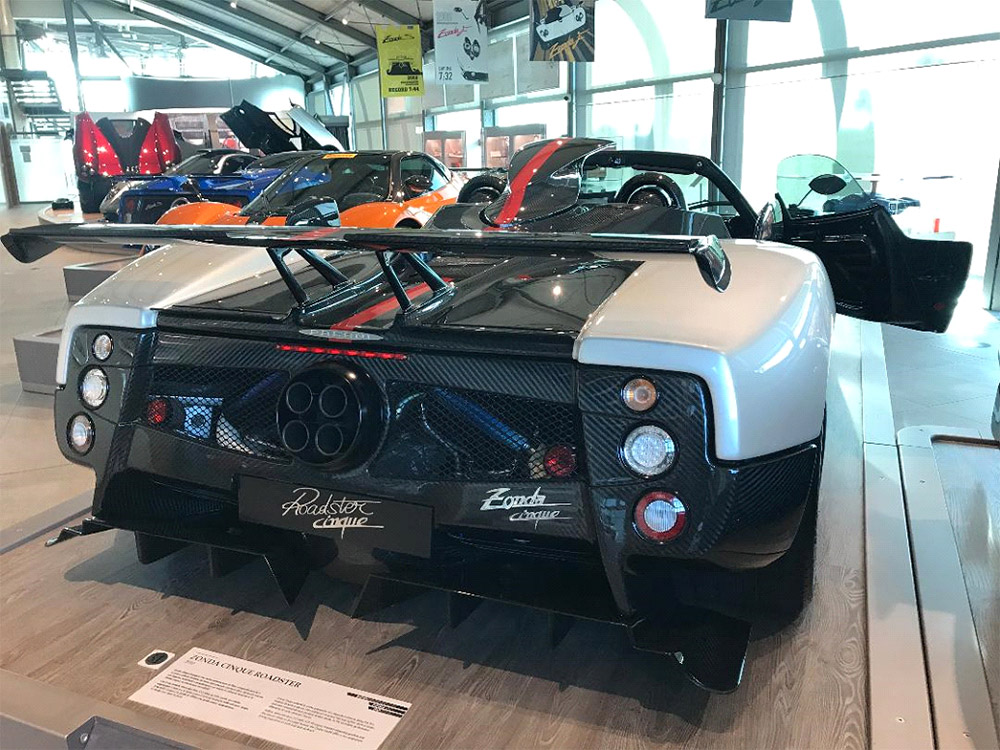 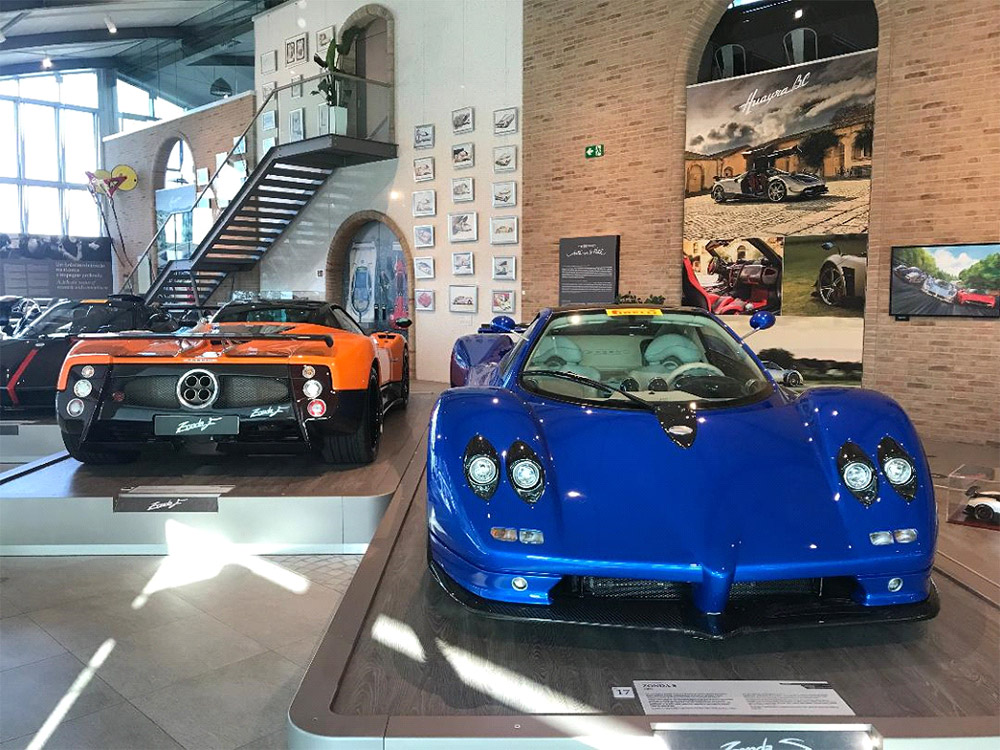 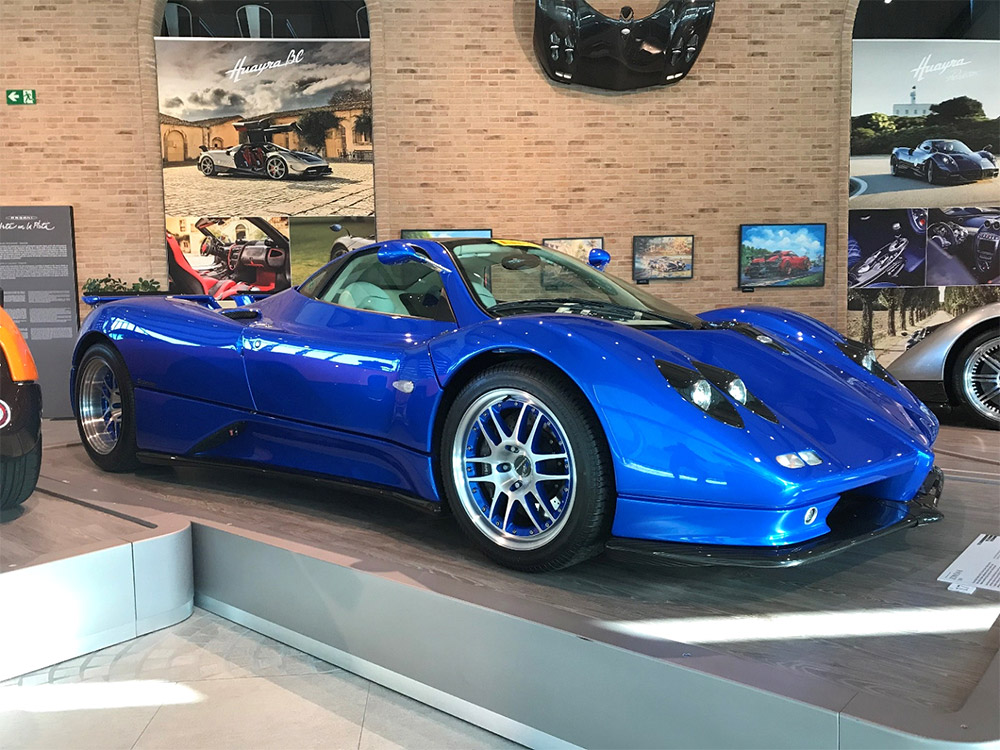 On The Speed Journal’s visit, seven cars from Pagani history formed a museum timeline, starting with the 1998 Zonda development protype that bore a heavy testing load trying out various engine and aerodynamic solutions. A 2000 blue Zonda S was the first street car to feature a fully visible carbon fiber body. Exposed carbon fiber may be common now, but was highly unusual at the time. A no-compromises 2005 Zonda F, an open-top 2010 Cinque roadster, the race-focused 2020 Imola and the one-off 2020 Barchetta completed the Zonda timeline. 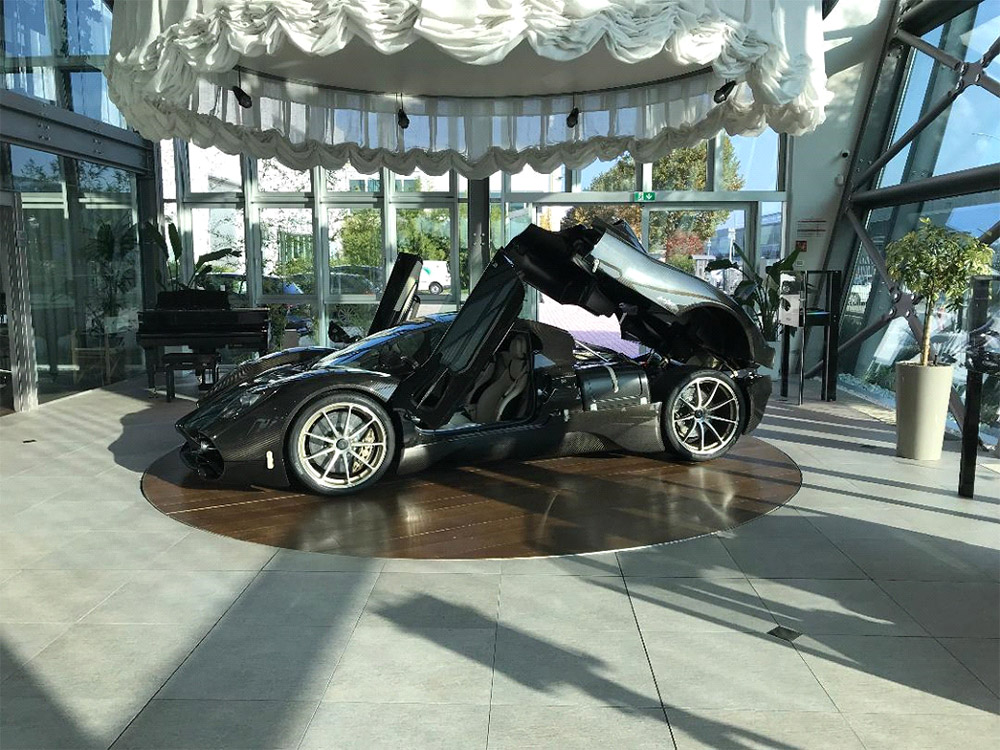 Across the room, the sparkling interior of a black Huayra rivaled the finest designs from a jeweler or watchmaker. Its enormous rear decklid was raised to show off the AMG powerplant, rear suspension and wide Pirelli tires. 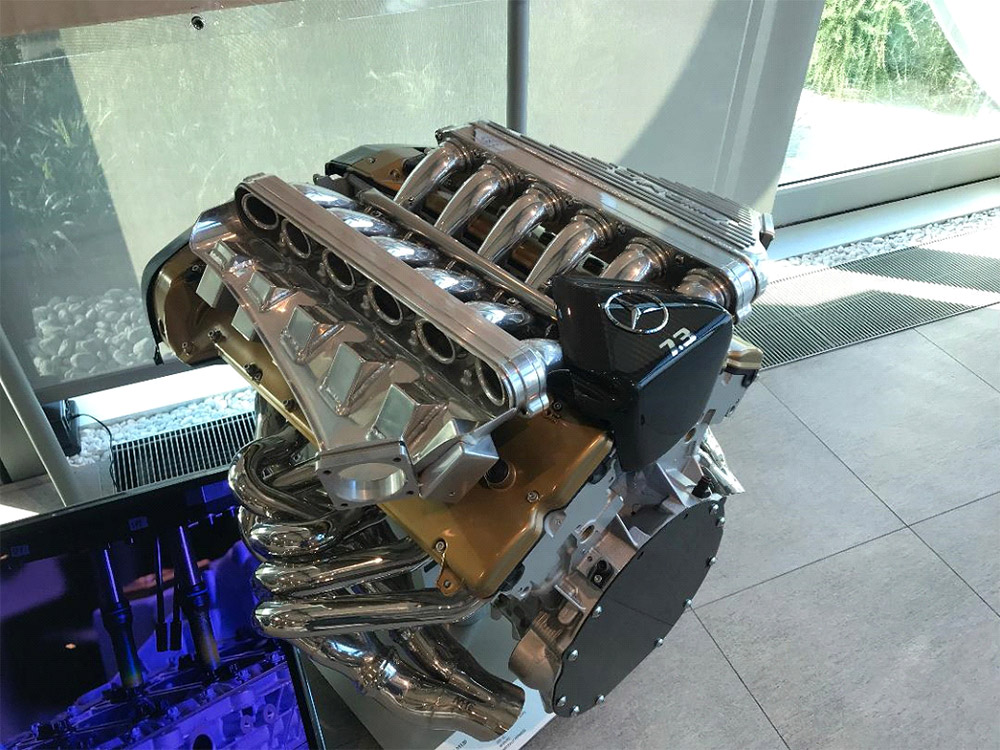 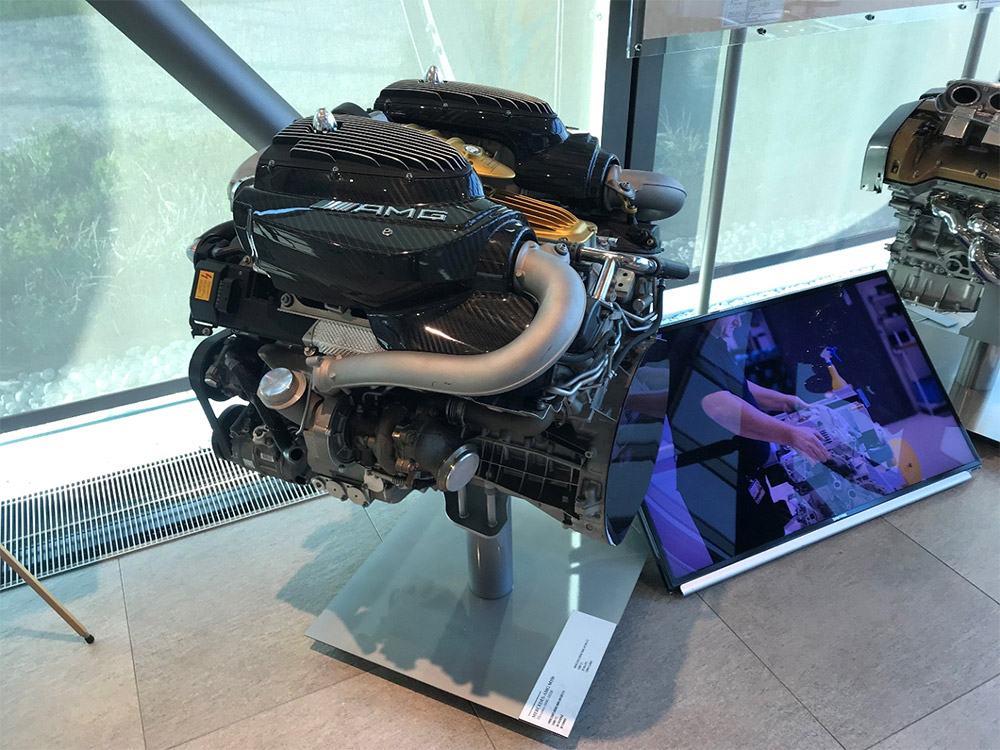 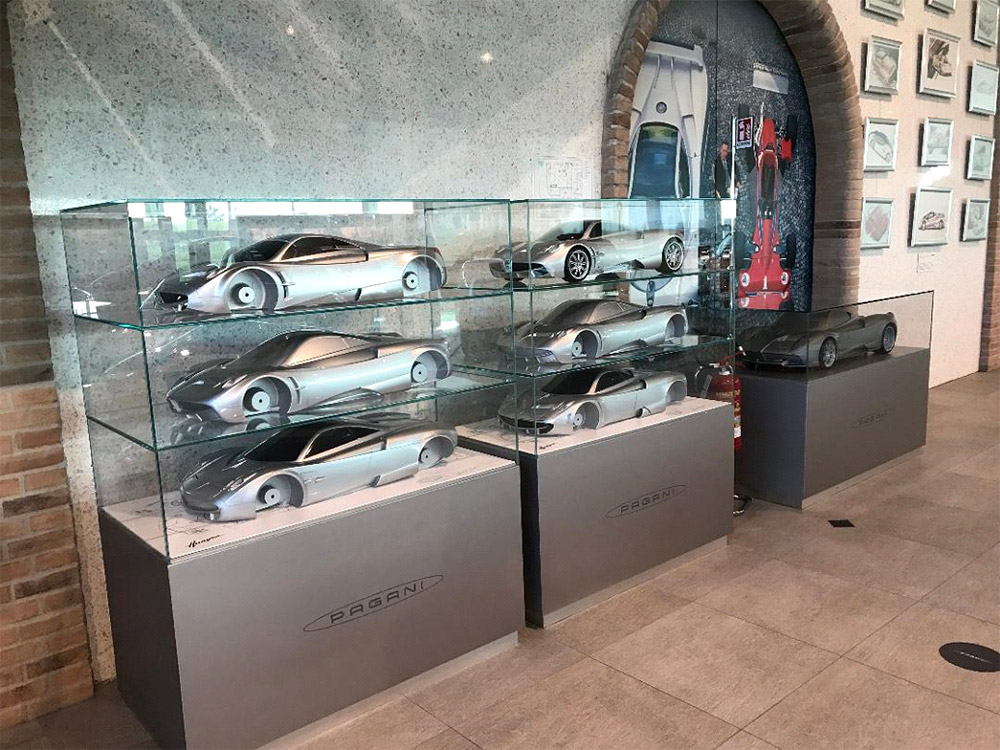 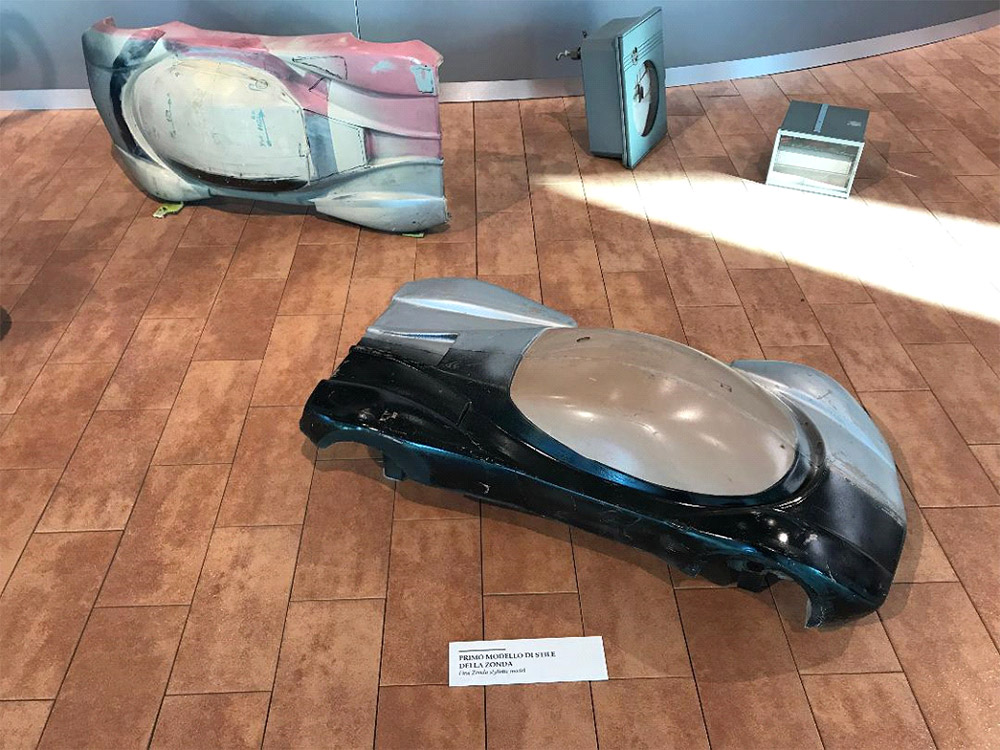 Artifacts from Horacio Pagani’s years before Pagani, including his F2 race car, were on display. Models and sketches from his formative years showed the origins of shapes found later in production cars. 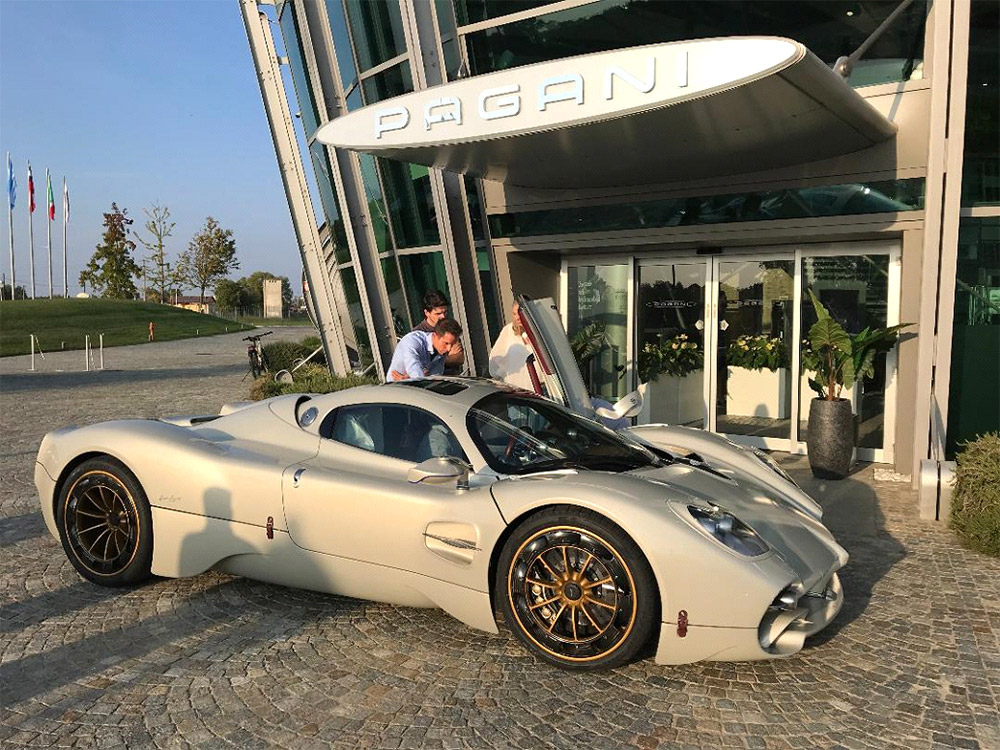 The museum doesn’t just look to the past, however. As a preview of coming attractions, Pagani’s latest creation made an appearance during The Speed Journal’s visit. Codenamed C10 during development, the next Pagani road car is ambitiously called the Utopia. The Utopia sticks to the traditional 12-cylinder recipe in an era where such engines are becoming scarce. Mercedes offered a V-8 hybrid that would have produced over 1000 horsepower but Pagani declined due to the added hybrid system’s weight. Only 99 units will be built. 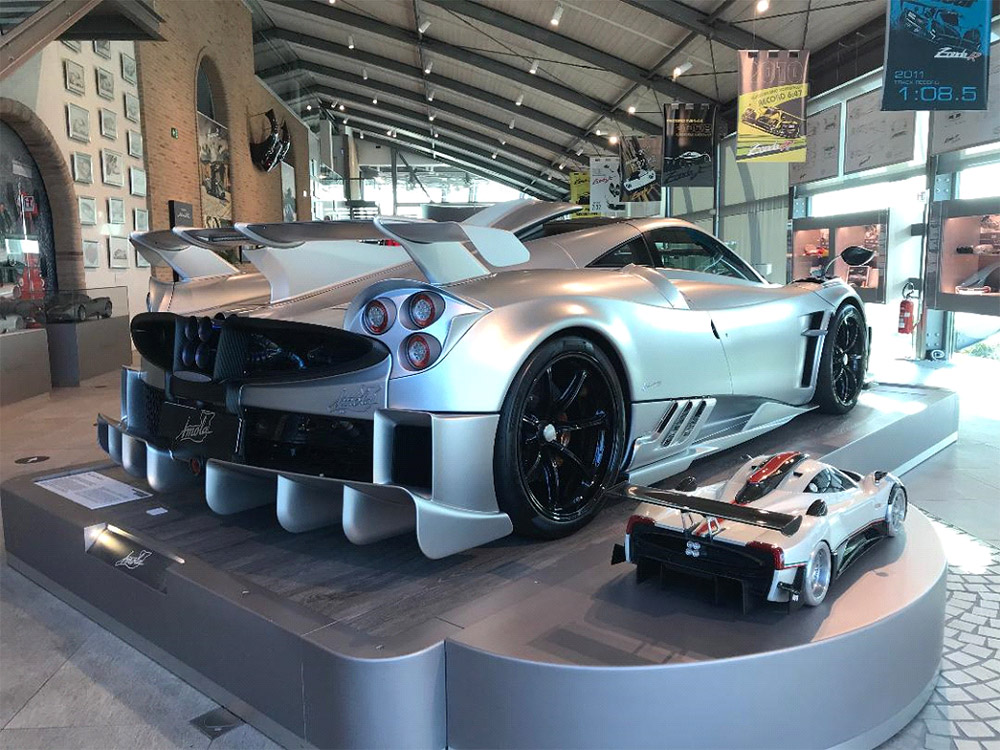 Considering a visit? Pagani is located in the Motor Valley which places it near the giants of Italian car constructors. From Pagani, it only takes a twenty minute drive to reach Maserati in Modena or Lamborghini in Sant’Agata Bolognese. Ferrari is only thirty minutes away in Maranello. Dallara and the Imola race circuit are both within an hour of Pagani’s headquarters. The area is an automotive ecosystem of museums, specialist machine shops and vendors so plan ahead – and don’t forget to enjoy the locally made Parmigiano cheese and balsamic vinegar.

The Fastest Car is a Rental: Xtreme Xperience on the Streets of Willow