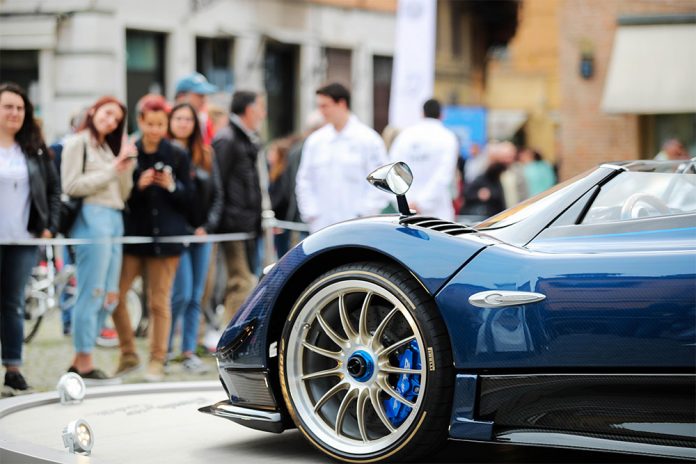 Pagani Automobili is taking part in the third edition of the Motor Valley Fest, which will be held from 1-4 July in Emilia-Romagna, the “land of motors”. An event of global significance, eagerly awaited by fans of two and four wheels, and where the public will once again be present after a strictly “virtual” edition in 2020 due to the pandemic. This year the event will take place in hybrid format – both physical and digital – to further enhance the experience of a journey to discover the excellence of a region that is unique in the world.

The backdrop for the Pagani Hypercars will be the Piazza Grande in the heart of Modena, a UNESCO world heritage site. In the shadow of the Civic Tower, four different models of Huayra, the car that this year celebrates its tenth anniversary, will be exhibited. Presented in 2011, the Huayra represents the perfect combination of scientific and artistic research, inspired by the philosophy of Leonardo Da Vinci, a principle that is still firmly embedded in Pagani Automobili’s DNA. Alongside the Huayra BC and Roadster BC versions, also on display will be the Huayra Tricolore, created in just three examples and dedicated to the 60th anniversary of the Italian Air Force Aerobatic Team, who starred, together with the car, in an exciting video; and the Pagani Imola, a laboratory car on which major innovations were designed, tested and developed, and whose name pays homage to the Motor Valley track on which it was shaped and perfected.

The line-up will be completed by the very first Zonda C12, chassis number 001, originally used for homologation and crash tests and the result of painstaking restoration work. The exhibition continues inside the Military Academy with the Zonda HP Barchetta, while the Zonda R will play the leading role in the exciting events that will take place at the Novi Sad Park.

The exhibition “Auto d’autore”
Marking the tenth anniversary of Huayra, Horacio Pagani will be the protagonist of the “Auto d’autore” (designer cars) exhibition, which will take the visitor on a journey to discover his concept of design, through the story of the genesis of some of the most iconic components of the cars created in San Cesario Sul Panaro. In the stand set up in Piazza Grande, a video will be projected in which the founder of the Atelier retraces the stages of his experience from the beginning, when everything started on the other side of the ocean, in Argentina. A first-hand account of how his creations came into being and the inspiration that guides each project that bears his name. An exhibition area that shows some of the first models built by a very young Horacio Pagani up to the iconic components of the most recent Hypercars, enclosed in display cases like actual works of art. The technical drawings and 1:5 scale style model of Huayra R will also be premièred.

During the course of the event, enthusiasts will be able, by appointment, to visit the Horacio Pagani Museum and the production Atelier in San Cesario Sul Panaro, where the Huayra R style model that was presented to the public on June 10 at the Milano Monza Motor Show will be on display.

For those who cannot attend the Motor Valley Fest in person, Pagani is offering the possibility to follow the story dedicated to design through videos available from June 24 on the official Instagram and Facebook pages of the Horacio Pagani Museum.

Pagani Automobili Official Sponsor of the Sixtieth Anniversary of the Frecce Tri...

Pagani Automobili Celebrates the Tenth Anniversary of the Huayra at Monterey Car...