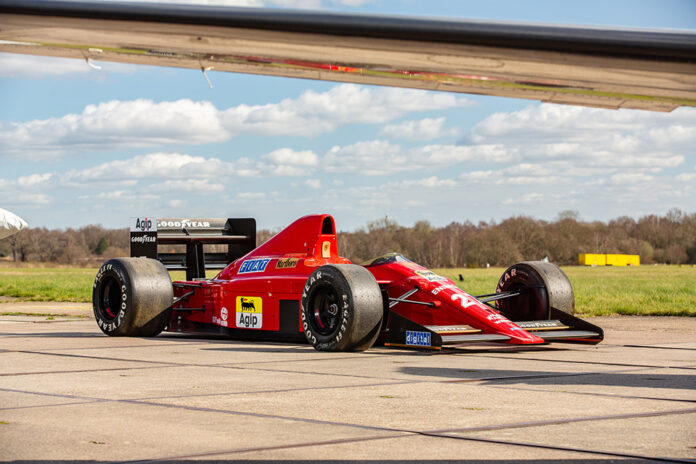 By the end of the 1980s, Nigel Mansell would have been able to look back on a fruitful Formula 1 career so far, though the best was yet to come. Almost half the decade spent with Lotus, followed by the latter half with Williams, had brought steady acclaim after a slow start marred by crashes and reliability issues. Mansell would become known for his “all or nothing” approach that brought him a career total of 31 race wins balanced against 32 retirements, many of which were the result of his tenacious racing style. The Englishman had tasted success with Lotus, netting five podium finishes, and while the race wins started to come with his second team, the stage was set for one final golden opportunity—enter Scuderia Ferrari.

Over the 1986 and 1987 Formula 1 seasons, Mansell was consistently up against the fastest drivers on the grid, alerting rival teams to his form—particularly Ferrari, who had not secured a Driver’s Championship title since Jody Scheckter clinched the trophy in 1979. The team was on the look-out for a new driver to partner Gerhard Berger after declaring that the contract of the incumbent Michele Alboreto would not be renewed. The Italian ended his five-year stay with Ferrari with 80 race entries, a record that would stand until Berger surpassed it in 1995.

In 1986, Mansell stepped onto the podium nine times, five of those race victories—continually impressing from behind the wheel of his Williams FW11. The following season, the Englishman went one better with six race wins. By 1988, Canon Williams had lost their relationship with Honda as an engine supplier, and the team’s car for that season—the FW12—would be powered by a Judd-supplied V-8 engine. Though Mansell showed glimmers of his form with two 2nd-place finishes, that year proved to be tough for him and the Williams team as he started and withdrew from 12 races out of the 16-race calendar.

With Ferrari eager to replace Alboreto, Mansell was an obvious candidate from the Formula 1 grid to join the Scuderia. Any potential frustrations with the Judd-powered Williams car and eagerness for one final tilt towards the Driver’s Championship with the backing of a strong team combined for a very timely opportunity. Remarkably, Mansell would be the last team driver personally recruited by Enzo Ferrari, with the great company founder closely involved in the running of the F1 operation until his passing in August 1988. Mansell described the honour as “one of the greatest in my career” and “Il Commendatore” presented the Englishman with a Ferrari F40 as a welcome gift upon joining.

Mansell instantly hit it off with Ferrari and its partisan Italian fanbase, earning the nickname of “Il Leone”—or “The Lion”—thanks to his courageous driving style. The 1989 season—Mansell’s first racing in the red of Scuderia Ferrari—marked a newly introduced ban on turbo-charged engines imposed by the FIA, and Mansell’s new car, the Ferrari 640, was powered by the Tipo 035/5; a normally aspirated, 3.5-litre, V-12 engine. The highly respected John Barnard had been brought over from McLaren to lead the design of the 640, and the car would be the first Ferrari that the English engineer would work on.

The 640 quickly became recognisable with its sharp nose, narrow monocoque chassis and wide wings that housed the radiators. Engineers at Maranello pioneered a semi-automatic gearbox for the first time, equipping this car with a seven-speed sequential transmission. This car had long been in development and bosses at the Maranello race team had hoped to introduce it one year earlier, having begun its designs in 1987. The development of the semi-automatic gearbox posed continual problems, however, and so Ferrari had to field the preceding F1/87/88C in the 1988 season.

Ahead of the first race of the 1989 season, the Brazilian Grand Prix, Mansell became the Scuderia’s 78th race entrant in the team’s 40-year history, and the driver travelled to Italy to get to grips with the new Ferrari 640. On 5 January 1989, at the Fiorano Circuit and behind the wheel of the forthcoming season’s car, the Englishman set a new track record at 1’08.12, setting the bar high for what was to come. On 1 February, chassis 109 was revealed to the press as the first-ever Ferrari team car to be announced without Enzo Ferrari.

Lining up at Jacarepaguá, Rio de Janeiro on 26 March 1989, for the beginning of the season in new team colours, Mansell qualified in 6th place, with his teammate Berger sealing 3rd spot. In a highly competitive field featuring the likes of Ayrton Senna, Alain Prost and Nelson Piquet, Mansell fought his way through to the front of the field and won his debut race for Ferrari—sealing victory over 2nd-place Prost by over seven seconds.

Though the season had started so brightly, the following succession of races quickly dampened the furore around Ferrari’s newest recruit. Early retirements came in the subsequent San Marino, Monaco, Mexico, and U.S.A. Grands Prix, then in the sixth race of 1989 at the Circuit Gilles Villeneuve in Canada, despite qualifying in 5th place, Mansell was disqualified during a confusing chain of events. Towards the end of a rainstorm, Mansell chose to pit and switch to slick tyres at the end of the second formation lap, meaning he would have to start the race from the pit lane. With seemingly little advice from race officials, the driver left the pit lane to join the circuit before the main grid had been shown green lights, resulting in Mansell being black-flagged.

Circumstances would improve, though. In the following races, first at the French Grand Prix, where Mansell drove chassis number 110, and then at Silverstone back in this car, the driver twice finished 2nd. Both podium finishes came in behind Prost, who was starting to gain momentum behind his ultimately successful push towards the Driver’s title for that year. At the German Grand Prix, Mansell finished 3rd behind 2nd-placed Prost and the winning Senna, while the next race outing in Hungary would be Mansell’s chance to shine once again. Remarkably, “Il Leone” qualified in 12th position, but reclaimed the grid to win at the Hungaroring in the tenth race of the season, also recording the fastest lap of the day in the process.

Another podium finish came at the next race in Belgium, where Mansell finished 3rd when driving chassis 112, though disappointingly, at that point his points haul for the season would be concluded. For the next few races, Mansell would continue in chassis 112, including at Ferrari’s “homecoming” Grand Prix in Monza, where he was disappointingly forced to retire with gearbox problems. At the next race in Portugal, he was disqualified and he then had to retire with engine problems in Japan, and spun off in Australia—though back behind the wheel of this car in Adelaide—finally settling on 4th in the Driver’s Championship standings. Mansell got to keep chassis 109, with the car shipped to join his personal car collection in England in January 1990.

For the 1990 season, Mansell and the Ferrari team continued to suffer bad luck with reliability issues, and he finished 5th overall in that year’s Driver’s standings. Undercurrents of disappointment and alleged favourable treatment for teammates resulted in Mansell calling time on his Ferrari career and—temporarily—his Formula 1 career at the end of that season, threatening to quit the sport altogether. Frank Williams saved the driver from that and he would go onto finally become a Driver’s Champion in 1992, re-joining and winning with the Williams team he left to sign for Ferrari.

Since being presented to Mansell in 1990, this Ferrari 640 has been kept in the driver’s personal car collection, having allegedly not run since its last outing in the 1989 season. The Ferrari will need mechanical inspection and recommissioning prior to returning to the race track. Rarely does such an opportunity come up to own part of Ferrari and Formula 1 history, making this an enticing and lucrative opportunity for any motorsport collector.

*Please note that this lot is sold on a Bill of Sale.
*TEMPORARY IMPORT (EU)

Full details can be seen here.