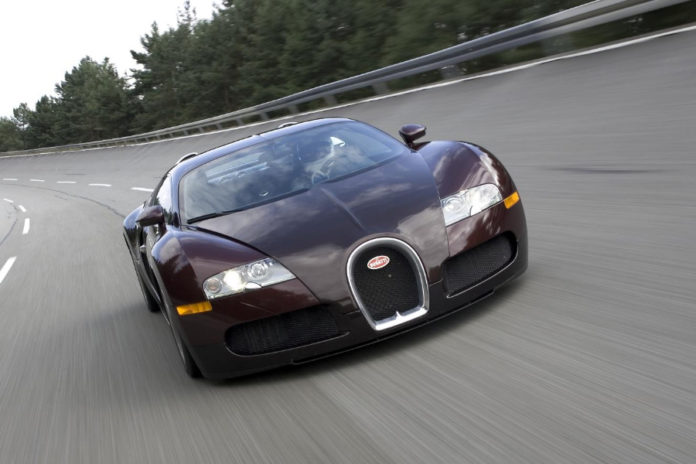 407 km/h. With a series production car. This had never been achieved before. Exactly 15 years ago, Bugatti was the first series manufacturer to achieve this record, which still stands today, with the Veyron 16.4. The French luxury manufacturer of hyper sports cars had achieved one of the development goals that it had set for itself, something that the public believed to be unachievable.

The first hyper sports car was designed for a power output of over 1,000 PS, to accelerate from 0 to 100 km/h in under 3 seconds, and to drive faster than 406 km/h. It was powered by an engine completely developed from scratch: W16 with 16 cylinders, with a displacement of 8.0 litres, and four turbochargers. The 1,001 PS output and 1,250 newton metres of torque were distributed by a newly developed, seven-speed dual clutch gearbox (DSG) to a permanent all-wheel drive. The Veyron 16.4 accelerated from 0 to 100 km/h in 2.5 seconds. No other series production vehicle could accelerate that fast in 2005. The hyper sports car reached a speed of 200 km/h in 7.3 seconds, and 300 km/h in 16.7 seconds. However, the main development goal was the top speed of 407 km/h. No other series production vehicle had been able to break the magical 400 km/h barrier before. The ingenious engineer and the driving force behind Bugatti, Ferdinand Karl Piëch, developed the legendary Porsche 917. The racing car had won the 24 Hours of Le Mans for the first time for Porsche in the 1960s and drove with a top speed of 406 km/h on the Hunaudières Straight. The Veyron was to drive even faster.

“Bugatti has been at the pinnacle of automotive engineering for over 110 years. With the Veyron 16.4, Bugatti not only unveiled what can be called the world’s first hyper sports car in 2005, but also achieved an unbelievable speed record”, says Stephan Winkelmann, President of Bugatti. “Even 15 years after the record, it is still a car of sheer power, speed and elegance in a timeless design. An icon of automotive history. I have the greatest respect for the achievement, courage and willpower of the team back then. They really did create an extraordinary car.”

With the help of active aerodynamics, the Veyron 16.4 changes its outer shell when it reaches a speed of 220 km/h. Just like on an aeroplane, central hydraulics adjust the diffusor, rear spoiler and separating edge. The vehicle height is also reduced to reach more than 380 km/h. The main objective: to maintain outstanding vehicle stability across the entire speed range. As drag has a quadratic increase, however, and thus rises disproportionately at higher speeds, a further aerodynamic configuration is required. After months of tests, as modern computer modelling was not yet possible, the engineers worked out the corresponding adjustment values.

When test driver Uwe Novacki climbed into the Veyron 16.4 on 19 April 2005, he was relaxed. As the lead driving safety instructor of Volkswagen at the time, and as a member of the technical development team, he understood high-speed driving, as he regularly drove at speeds beyond the 300 km/h mark. He was known to be an experienced driving safety instructor who, at that time, had already been driving professionally for over 30 years. He was also very familiar with the test site in Ehra-Lessien, with its almost nine-kilometre long, three-lane, high-speed track: He regularly trained other drivers here at top speeds. “It was a great honour for me to be the first driver to attempt to surpass 400 km/h with the Veyron. I wasn’t nervous before the drive, and I wasn’t afraid, but I did feel respect. Even though I was used to driving regularly at high speeds, this speed range was a whole new dimension. No-one had experience of this”, explains the 71-year old today. Only a few drivers had driven over 400 km/h at that time, and none of those in a series production vehicle. The timing of the record-breaking drive in April couldn’t have been better: it was just a few months before production was due to start on the Veyron 16.4 in September 2005, and it was an important signal to all those who doubted that the hyper sports car would meet all of its development goals.

15 years ago, the Bugatti Veyron 16.4 achieved the impossible and became the first series production car to break the 400 km/h barrier.

Before the record-breaking drive, Novacki familiarised himself with the Veyron 16.4 in Bugatti’s homeland of France, taking time to get to know the technology and handling of the car on a racing track near the Molsheim site. To reach the unbelievable speed of more than 400 km/h in Ehra-Lessien, Novacki activated a second key, the so-called Speed Key, to reach top speed mode ahead of his record-breaking drive. When this key is activated, the Veyron is lowered to a V-shape by the hydraulic system, the rear wing is adjusted to two degrees and the diffuser flaps are closed to lower the drag. However, during the first attempt, Novacki only reached 380 km/h. A few days later, in good weather conditions, he once again put on his fire-proof racing suit and safety helmet and strapped himself into the Veyron. “The car was very quiet, perfectly tuned, and I could immediately tell that the engine was really giving off a lot of power”, says Uwe Novacki.

To reach top speed on the straight at Ehra-Lessien, he also had to drive really quickly into the steep bends. The problem: the centrifugal forces caused the vehicle to press down hard on the suspension. If Novacki drove too fast, the suspension would compress too much and become fully extended. Pressure would then be transferred to the tyres and handling of the car would become unstable. “I cautiously approached the speed range. On the first lap, I drove around the steep bend at 230 km/h which was too fast and the car became unstable. I took the next bend at 220 km/h and the car felt more stable”, he explains. Novacki continues: “Before I came out of the bend, I accelerated as hard as I could to get the full 1,001 PS out of the Veyron’s engine. I was so impressed with how stable, effortless and safe the car felt at 400 km/h.”

At the end of the straight, the car had reached an unbelievable 411 km/h. A digital display at the test site even recorded 427 km/h – which later proved to be a miscalculation – the display generally only measures accurately up to 300 km/h, after which it extrapolates the speed. “At this speed you have to concentrate very hard, and know how to read the road and the car. The smallest irregularity or sudden movement of the steering wheel can have dramatic consequences”, explains Uwe Novacki. The speed was measured precisely in both directions of the high-speed track using a precision measuring system by the testing organisation “TÜV Süd” who were on site. Several times, the Veyron 16.4 reached over 408 km/h. In the end, the value entered in the type approval documents was 407 km/h. This made the Veyron the world’s fastest series production sports car at its production launch in 2005. “For me it was a wonderful feeling to have been a part of it all”, explains Novacki.

More records followThis wasn’t the only speed record for the Veyron. The car broke two further records in the following years. In June 2010, the enhanced Veyron 16.4 Super Sport even topped that performance. Its engine now produced 1,200 PS and propelled the hyper sports car to speeds of up to 431 km/h. Behind the steering wheel was the French racing driver Pierre-Henri Raphanel, once again claiming the world record as the fastest street-legal series production vehicle. In April 2013, the open-top Bugatti Veyron 16.4 Grand Sport Vitesse set yet another speed record: reaching 408.84 km/h, it became the world’s fastest street-legal roadster.

This wasn’t the last speed record that Bugatti would break. In 2019, Bugatti was the first manufacturer to exceed the 300 miles per hour mark with the latest Chiron Super Sport 300+*. At the same time, Bugatti set a new speed record at 304.773 mph (490.484 km/h). Never before has a vehicle by a series-production manufacturer reached such speeds. “It’s still an incredible achievement for Bugatti. The name of Bugatti will once again go down in the history books as the first brand to pass the 300-mile-per-hour mark,” says Stephan Winkelmann.

Even if Bugatti no longer focuses on breaking records in the future, the records that it has already set will remain forever and will never be forgotten. These are milestones in automotive history.