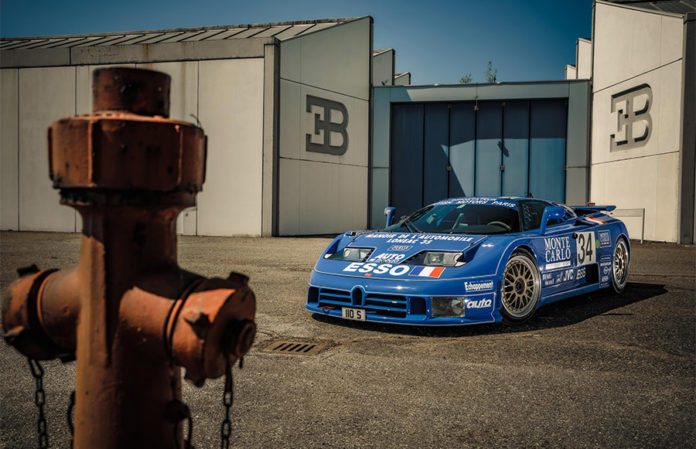 Friendly eyes, laugh lines around the corners of his mouth and an Italian singsong in his voice. When Loris Bicocchi talks about his passion, he has every listener under his spell. And Bicocchi has a lot to tell. Not about himself though, the native Italian is far too modest. He prefers to talk about cars, more specifically about super and hyper sports cars and especially about Bugatti. The brand that he’s not only been working for as a test and development driver for decades, but for which he has also set some remarkable records.

A career on schedule? Not quite. Although the young Bicocchi dreamed of sports cars in 1974, he could not afford one. Immediately after leaving school, Bicocchi, based in Sant’Agata Bolognese, started with Lamborghini, the sports car manufacturer in his immediate vicinity. As a warehouse worker, he was still not as close to cars as he wanted to be, but being interested in mechanics, he was constantly asking curiously until he got his explanations. One year later he worked as a mechanic, and a year after that he was permitted to test a sports car for the first time; a Lamborghini Countach. “That’s how I fulfilled my dream in the early 20’s – and was able to enjoy it for a very long time,” recalls the sixty-one-year-old. He’s been driving, testing and developing the supercars for 15 years, and for him this is at the ultimate dream job. 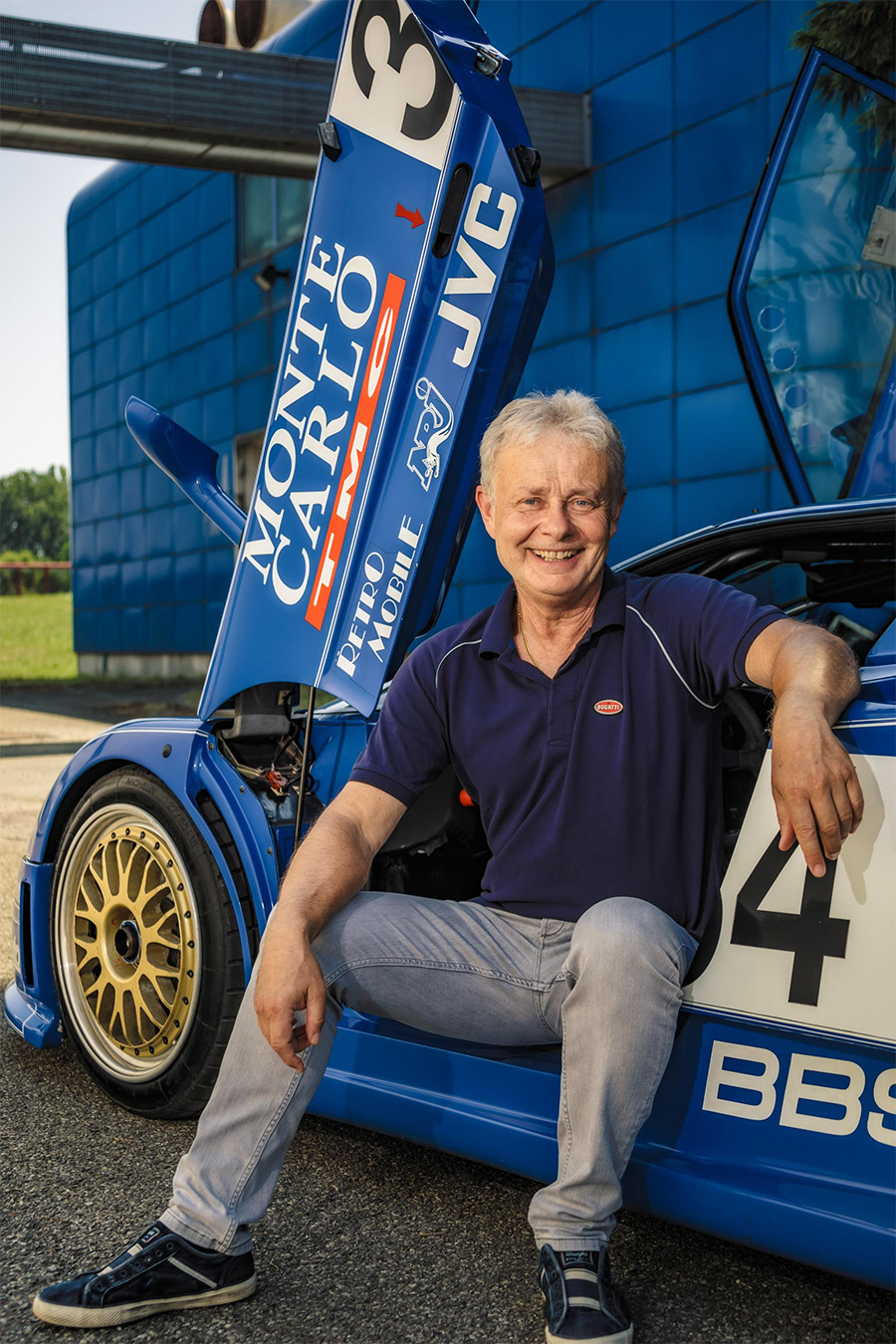 But it gets even better. In 1987, the Italian Romano Artioli bought the brand rights of the French manufacturer Bugatti, with the bold plan to develop the technically best super sports cars of the modern era. To find qualified personnel easier, he moved his new production facility to the vicinity of Italian supercar brands such as Ferrari, Maserati and Lamborghini. He convinced experienced employees to join him. Paolo Stanzani for example, among others; was a Lamborghini developer and designer that joined his team. “Paolo called me one day and invited me to a meeting. He told me about the project and asked me directly if I would like to have an exciting job,” remembers Loris Bicocchi. The task: to develop a new absolute supercar with four-wheel drive, V12 and four turbochargers from the ground up, again as a test driver. Driven by technical innovations, the EB110 GT and EB110 SS were to become the most modern sports cars of the 1990s. “For me, the job was perfect because I wanted to be able to develop myself, drive even faster cars and at no costs let the steering wheel out of my hands,” explains Bicocchi.

As a test driver, he developed the supercars in the following months and gave his expertise for chassis, brake, aerodynamics, tires, engine and transmission. “Everything was new with the EB110, there were no reference points, so I was allowed to test a lot,” he explains his task. The sports car was at its time, as usual at Bugatti, years ahead: It was the first production car with a carbon monocoque, the V12 had five valves per combustion chamber, four turbochargers, a six-speed transmission and the power was distributed over all four wheels. “In addition came the incredible power of 560 hp in the GT and up to 610 hp in the SS and a maximum speed of 8250 revolutions. Like racing cars,” Bicocchi marvels today. 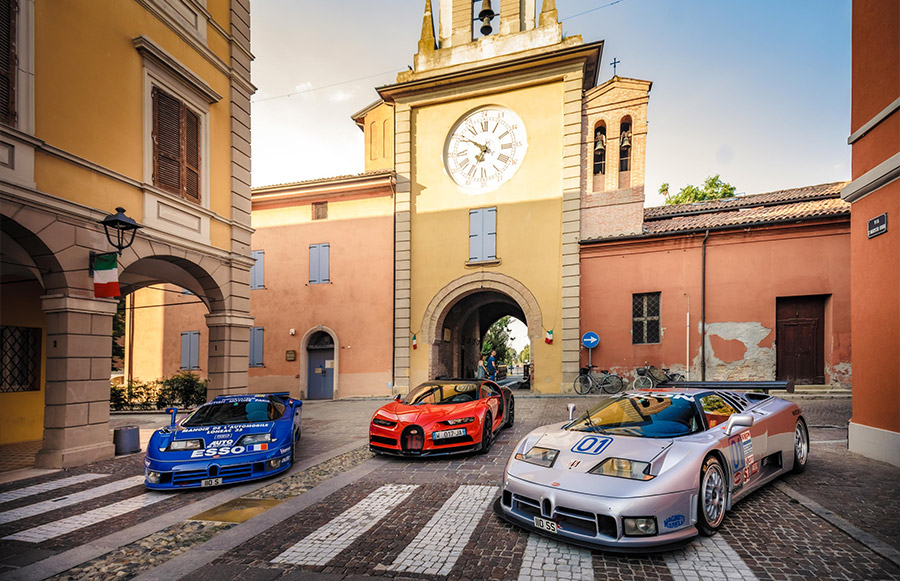 Thanks to the newly developed four-wheel drive, the Bugatti got the power onto the road without any problems and without it evaporating in the wheel arches. The performance is still, to this day, unbelievable: the EB110 SS reaches from 0 to 100 km/h in 3.26 seconds – a record for production sports cars. The Nürburgring Nordschleife circumnavigated the Bugatti 1991 in just 7 minutes and 44 seconds. “I’m still amazed how modern the car is today. Direct, clean, light and darn fast. It is excellent on the road and offers a high grip level” says Bicocchi.

At the beginning, the ratio between front and rear axle is 40 to 60 and at the end of the development process it is 28 to 72. “This gives the car the best performance. That’s why I drove many miles and many hours between 1990 and 1995. How many were exactly, but I cannot say more. Every day I sat in a Bugatti – it was like a never-ending dream,“ he still says enthusiastically. Among the many prototypes of the EB110, the planned luxury sedan EB112 joined.

The EB110 as the Best Life Experience

“The EB110 was my best life and work experience, which I still enjoy remembering with affection” says the Italian. A pure, powerful, unbeatable car in its day, the top ace of any car quartet. His most beautiful experiences include; the speed homologation for the EB110 GT with 342 km/h and the world record with natural gas of 344.7 km/h, in July 1994 – exactly 25 years ago. The world record of 351 km/h in a production car was broken by his colleague Jean-Philippe Vittecoq with an EB110 SS. A little later, however, Bugatti had to declare bankruptcy.

Bicocchi’s days at Bugatti were limited for the time being, but he could not live without the special cars. He joined Monaco as a test driver for a GT racing team, riding in an EB110 SS at the IMSA Championship in the GTS1 Supreme class and at the 24 Hours of Le Mans in the GT1 class. His knowledge and skills are in great demand in the supercar scene. But his heart clings onto Bugatti. 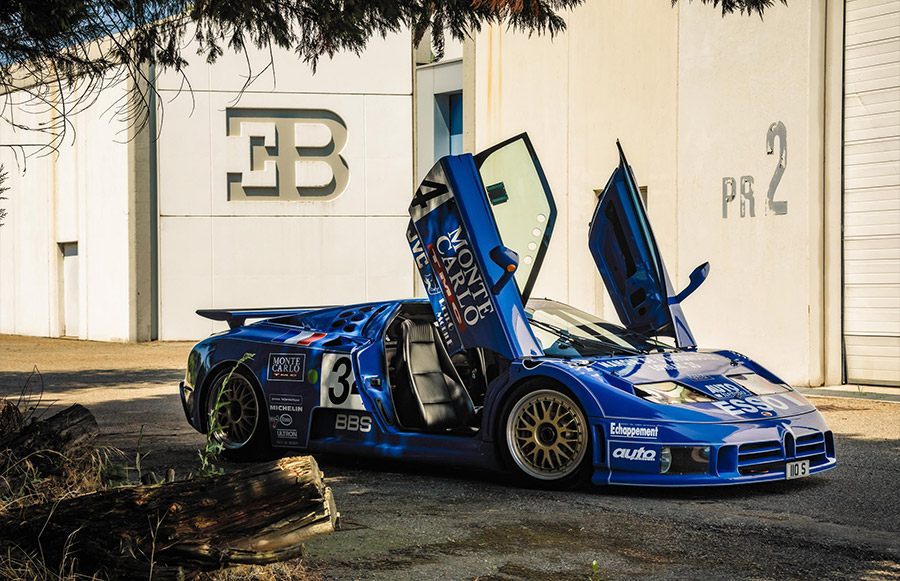 In 2000, he received a phone call from a friendly engineer working for the resurrected brand in Molsheim, France, asking if he would like to work on a new project. “Like the EB110, everything was new with Veyron, it was extraordinary. There was no predecessor, the performance with more than 1000 hp and the speed range of over 400 km/h were unimaginably large.” In the following years, Loris Bicocchi again drove, tested and developed the fastest car in the world.

Challenges in the Development of the Veyron

Starting with the second prototype of the Veyron, his work focused on the chassis, suspension, brakes, tires and steering. “The test work was very challenging because Bugatti pushed back into a speed range where no-one had used a production car before,” he says. To get this incredible power on the ground, while not overburdening the driver and letting the hyperspace drive easily, was one of his tasks. In the final tests for aerodynamics and speed, the engineers worked together with Bicocchi in millimetre increments. “The angle of attack of the flap, spoiler or diffuser can change the entire driving behaviour with a millimetre difference, especially at high speeds. Therefore, we had to approach the optimal setting via very small steps. It was the ultimate fine tuning,“ he explains. The Bugatti Chiron, the Veyron’s successor, too, was demanding his sensitive expertise; he tested it thousands of kilometres on public roads, on test tracks, performed heat and cold tests worldwide – and never tired.

Veyron and Chiron are both hyper sports cars, but still completely different vehicles. “Everything was unique on the Veyron, but the Chiron is not just an evolution, it’s a new car,” he explains. Because a new design changed the aerodynamics, the chassis, the engine, the steering, just everything. The hydraulic steering was changed to an electric one that works even finer, more direct and more precise with an even better feedback than the Veyron. In addition, the four-wheel drive runs more accurately, gives an even better performance on the road and ensures better traction. “The Chiron is even more dynamic, but also safer and more relaxed. We just made the perfect even better,” exclaims Bicocchi. 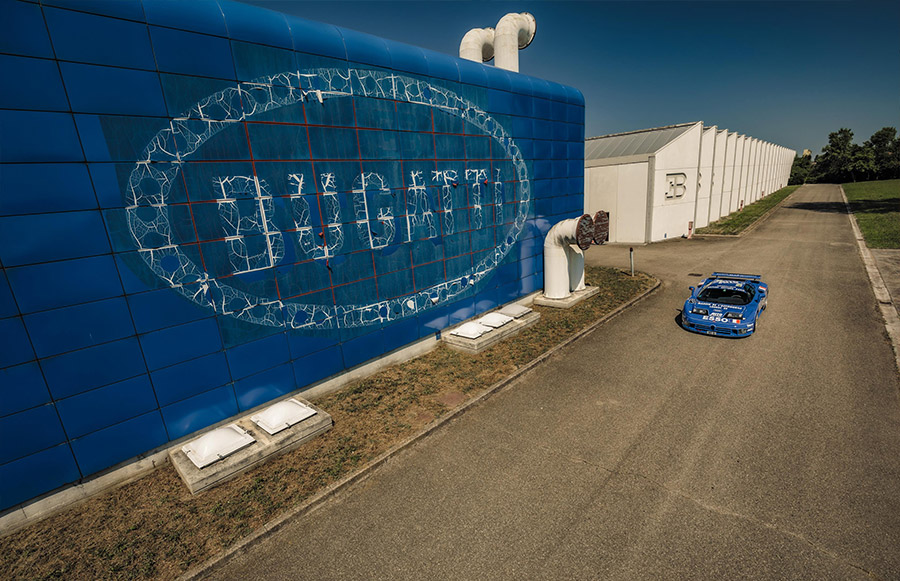 What still fascinates him about the hyper sports car from Molsheim is not just the incredible power and performance, but the easy drivability. After decades of work for Bugatti, there are two cars parked in his imaginary dream garage. The top supercar of the 1990s, the EB110 SS, and the current hyper sports car Chiron.

Loris Bicocchi smiles gently, looks forward as always. The passion for fast driving and accurate analysis of vehicles has not diminished over the past 45 years. He never settles with the results, he wants to continue to develop the vehicles, to research them and thereby seeks perfection. He is aligned to the style of Ettore Bugatti, who raised the art of engineering to an art form and constantly strived for perfection. Maybe that’s why Loris Bicocchi feels so comfortable with Bugatti, and so understood.

Bugatti Manchester designed a pop up showroom to present the newest member of the Chiron family.
Read more
Automotive News

Bugatti – Pioneer in Digitalization of the Design Process

Bugatti’s Hyper Sports Cars of Extremes from a Designer’s Point of V...

How Bugatti Experts Check Every New Divo Before Delivery