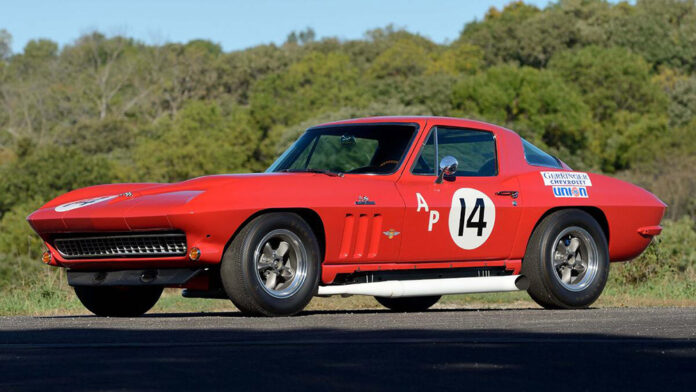 For nearly 70 years, the Chevrolet Corvette has captured the passionate hearts of car enthusiasts all over the world, and since 1985, “America’s Sports Car” has been among the most popular and coveted offerings at Mecum auction events. Headlining the nearly 200 Corvettes consigned to Mecum Kissimmee 2022, slated for Jan. 6-16 at Osceola Heritage Park in Kissimmee, Florida, are eight that have been appropriately earmarked as “A Once in a Lifetime Offering of Corvettes” due to their impressive individual and cumulative prowess.

“This remarkable selection of Corvettes heading to the world’s largest collector car auction in Kissimmee represents the finest in Corvette history, provenance, craftsmanship and quality that Mecum Auctions has ever offered,” Vice President of Consignments Frank Mecum stated. “Our consignment team had as much fun assembling these Corvettes as we believe our customers will have seeing and learning about these remarkable machines. They’re an absolute must-see this year in Kissimmee.”

The “Gulf One” Corvette is the most successful factory-backed production racing Corvette of the C2 era and bears one of only 14 regular-production Corvette serial numbers assigned specifically for competition. The Z06 Split Window is a highly acclaimed example of its breed with Bloomington Gold Benchmark and Bloomington Gold and Survivor awards all earned in 2013. It’s unrestored with original paint, glass, interior and drivetrain, shows just 39,000 actual miles and was owned by its original owner for 43 years. The Z06/N03 Corvette from collector Don Salmon boasts Bloomington Gold Certification, an NCRS Top Flight Award and is one of 63 produced with the N03 36-gallon fuel tank, and it features its original, matching-numbers 327/360 HP engine.

Also from the John Justo Collection is a pair of significant 1957 Corvettes. The Chevrolet Corvette Super Sport Show Car (Lot S145) is the GM Show Car that debuted at the Coliseum in New York in January 1957 with the purpose of introducing Rochester Ramjet fuel injection to the GM line after the feature was first brought to life under shop order 90181 in March of 1956. The other 1957 is a Big Brake Airbox (Lot F164) example that is one of 44 produced and was raced in SCCA competition from 1957-59.

The 1966 Chevrolet Corvette Pilot Line L88, (Lot S237) more famously known as the Pedro Rodriguez/NART Development L88, is the first known purpose-built Corvette factory race car resulting from a collaboration between GM’s Zora Arkus-Duntov and Luigi Chinetti of NART. Its extensive race history logs include an outing as the 1966 12 Hours of Sebring field test car for its aluminum cylinder heads, which are dated January 5, and January 13, 1966.

John Justo’s 1960 Chevrolet Corvette “Race Rat” Tanker (Lot F158) joining the Kissimmee lineup is one of just 10 produced by the factory with the LPO (Limited Production Option) 1625A 24-gallon fuel tank option, and it boasts status as the GT14 class winner and placed 16th overall at the 12 Hours of Sebring in 1960.

From The Jackie and Gary Runyon Collection is a 1967 Chevrolet Corvette Coupe (Lot S113) known as the “Vault Find,” and it remains in original, unrestored condition with the exception of battery and mufflers. The car was owned by one family from new until 2017 and shows a remarkably low 8,533 original miles. It retains its original window sticker, car shipper report, Protect-O-Plate, original radio tag, owner’s manual and extensive, handwritten maintenance logs.

Mecum Kissimmee 2022 will feature an estimated 3,500 vehicles in total, daily Road Art selections, the Mecum Midway of food, exhibitors and various live entertainment acts, the Dodge Thrill Ride, and, of course, the ceaseless high-energy Mecum auction action. Kissimmee 2022 will also mark the beginning of a multiyear partnership between Mecum Auctions and MotorTrend Group with Mecum’s debut on MotorTrend+ and MotorTrend TV.

To complement the fine selection of Corvettes is a vast assemblage of Corvette-themed memorabilia among the more than 1,000 Road Art items to be offered at Mecum Kissimmee 2022, including a plethora of items From the Jerry Brewis Estate Collection. From Corvette car parts, pedal cars, kiddie rides and scale models to the Paul Reed Smith Corvette Z06 Custom Guitar and original paintings, there is no shortage of Corvette-related Road Art offerings slated for the Kissimmee auction block.

Those interested in consigning a vehicle for auction at Mecum Kissimmee 2022 can find complete details about the consignment process and pricing at Mecum.com. Bidder registration is available online in advance and on-site at the auction for $200, and it includes admission for two persons to all 11 auction days. General admission tickets are available in advance online for $20 per person, per day, and for $30 at the door and online after Jan. 5; children 12 and younger receive complimentary admission. Presiding health and safety protocols will remain in place for all those in attendance. For those unable to attend in person, enhanced remote bidding options are also available, including both online and telephone bidding.