Aim is to win the event and strive to challenge the outright record. 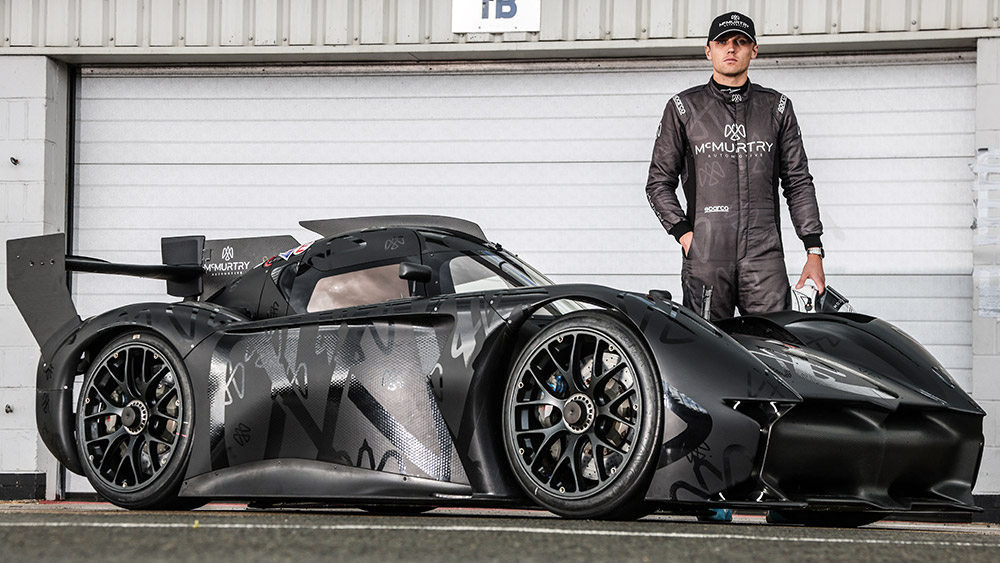 New developments reveal 2000kg of instant downforce-on-demand and a sub 1.5 second 0-60mph for unique fan car.  Here’s the story on how British EV manufacturer McMurtry Automotive is attempting to storm up the Goodwood Hill.

In 2016, a team of former Formula 1 engineers were tasked by one of Britain’s most successful entrepreneurs, Sir David McMurtry, to design and build the ultimate high performance car. At Goodwood 2021 the result of this challenge, the McMurtry Spéirling, was revealed to the public. Twelve months later, having conducted an extensive testing programme with former Formula 1 driver Max Chilton, the team return to Goodwood, this time competing for victory, with aspirations to challenge the outright record too.

The secret to the performance of the Spéirling is its ‘clean sheet’ design. Sir David tasked the team with reimagining what a car should look like in the 21st century, starting from first principles rather than following the standard process of evolving what had come before. The result is a fully-electric, compact vehicle designed around the twin goals of driver engagement and vehicle performance. The purpose of the Spéirling is to herald a new era of electric track capability, hasten wider EV development and showcase McMurtry Automotive as EV innovators for road and track cars.

The Spéirling’s unique performance differentiator is its fan powered downforce producing more than double its own weight in downforce which, unlike conventional vehicles, is available at all speeds as it does not rely on airflow over the car. The figures are impressive, generating more downforce than a Formula 1 car at speeds up to 150mph, with significantly less drag. The instant downforce allows the instant torque from the drive motors to be fully deployed – the result is 0-60mph in under 1.5 seconds and a top speed of 150mph (which is capped due to hillclimb gearbox selection).

These figures, plus the confidence gained from extensive track testing with former Formula 1, Le Mans and IndyCar driver Max Chilton has convinced the team at McMurtry that an outside shot at the record on the Goodwood hillclimb is within reach. The record is currently held by the Volkswagen ID.R, having previously been held by a McLaren Formula 1 car.  Chilton will be supported in this endeavor by current British hillclimb championship leader Alex Summers.  Having drivers from different disciplines sharing the car will help push each other and the car to its maximum.

Powering the fully-electric car, the 60 kWh battery pack within the Spéirling is designed and built by McMurtry Automotive using cutting edge Molicel cells.  The two companies’ strategic technical partnership gives the Spéirling a distinct advantage for power density, delivering impressive acceleration, and for energy density, contributing to over 30 mins of track running range.   More details on the battery will be revealed in the coming weeks.

The sound, grip, acceleration, aesthetics and technology of this car are distinct.  Witnessing a fan car compete in motorsport again will offer a rare and appreciably different experience for visitors to the Festival of Speed.  It will be running in the ‘Batch 5’ and the shootout sessions.

This new chapter in fan car history will be available to watch on the Goodwood live Youtube stream or in person at the event: 16.10 Saturday for Qualifying and 15.30 Sunday for the Shootout (provisional times).

Max Chilton, Lead Development Driver:   “Having previously enjoyed demonstration runs in an F1 car at Goodwood Festival of Speed, this year, I’m looking forward to making my competitive hillclimb debut.  The challenge now is to translate confidence and speed from testing on conventional circuits onto Goodwood’s tight, undulating hillclimb course. We will have limited practice runs and an audience of hundreds of thousands, so it’s a demanding yet great opportunity to show the current pace of this car on the world stage. ”

“The largely constant downforce is an innovative feature to exploit as a driver.  It’s very different  compared to what I’m used to driving in F1 and IndyCar, and testing this year has required me to adapt my driving style to maximise performance.”

[Max will be driving Thursday, Friday and Sunday.  Alex Summers is driving on Saturday.]

Thomas Yates, Managing Director:  “Our aim is to win the event and we feel that the record is within reach if everything aligns for us. Of course this is motorsport and you can never take anything for granted but we are turning up with a highly competitive package. The last time a fan car competed in motorsport was when Niki Lauda dominated the 1978 Swedish Formula One Grand Prix.   As Goodwood is celebrating innovators of motorsport this year, we are proud to be bringing back the legendary fan car concept, this time with a leading edge power source! “