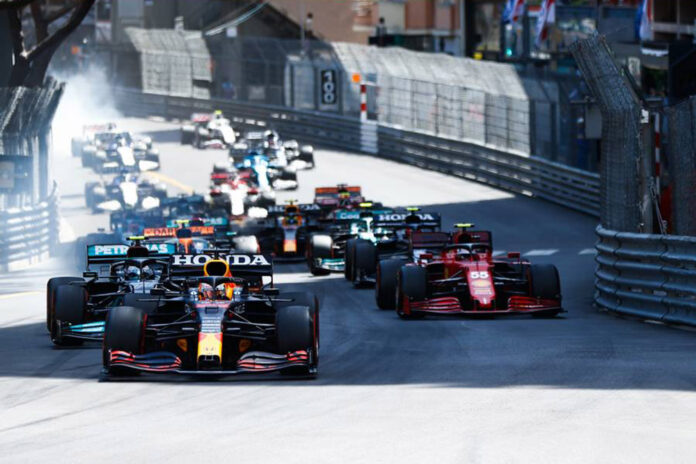 Today was the day that Honda’s racing organization had been waiting for since getting back into the Formula 1 World Championship in 2015.

A dominant performance in Sunday’s Monaco Grand Prix saw the Red Bull Racing Hondas lead all 78 laps around the tight Monaco street course and promoted racewinner Max Verstappen into the series points lead for the first time in his career. And after Sergio Perez made a strong mid-race push to climb into fourth place, Honda found itself leading the constructors championship for the first time since the end of the 1991 season.

After qualifying second, Verstappen was promoted to pole position when Charles Leclerc’s Ferrari was unable to start after crashing at the end of Saturday’s qualifying. Given the opportunity, Verstappen outraced Valtteri Bottas to the first corner to take a lead he would only relinquish to his teammate Perez after his first pit stop.

Behind Verstappen, Pierre Gasly had his AlphaTauri Honda firmly entrenched in fifth place, keeping points leader Lewis Hamilton at bay while Perez ran eighth as the field headed toward its only round of pit stops.

Hamilton pitted first in a bid to gain track position, but Gasly’s strong laps before the stop – combined with quick work by the AlphaTauri team on Pit Lane – kept Gasly ahead.

Behind that battle, Perez was running the laps that would ultimately boost the Red Bull Racing Hondas to the top of the standings. Running eighth, Perez stayed out in clear air and made a series of quick trips around the 2.068-mile circuit that vaulted him to fourth after his stop.

Verstappen fought off a late charge from Carlos Sainz Jr. to claim his second victory of the year, and when combined with a seventh-place finish for Hamilton, moved the Dutchman into the lead in the Formula 1 World Championship for the first time in his 124-race career.

Perez finished fourth to take his third consecutive top-five finish while Gasly ended up a season-high sixth. Rookie Yuki Tsunoda started 15th and finished 16th.The teams will have next week off before heading to F1’s newest street circuit, the Baku layout in Azerbaijan, June 6.

Toyoharu Tanabe
Technical Director, Honda F1
It’s fantastic that Honda has claimed its first win at Monaco since Ayrton Senna took the victory back in 1992. We are delighted to have this very special and historic race at a track where we have won several times in the past. There is more reason to celebrate as this is Max Verstappen’s first win here and his first podium. Having no one in front of him on the grid certainly helped a bit, but this win was down to his driving, the Red Bull Racing chassis and our PU, with all three of these elements functioning perfectly. Sergio Perez also produced a strong performance so that his driving and an excellent team strategy allowed him to move up from ninth on the grid to fourth at the end, bringing home a good number of points. For Scuderia AlphaTauri Honda, Pierre Gasly had to deal with having Hamilton behind him for the whole race but he never lost concentration to finish sixth. As for Yuki Tsunoda, he was always going to have a difficult afternoon, starting so far back on the grid, but it was impressive that he completed almost 70 laps on his Hard tires, before putting in some very quick lap times in clean air after his tire stop and I’m sure he learned a lot. With Red Bull Racing, we are leading both championships, but there are many races to come and we must continue working to improve.”

Max Verstappen – Red Bull Racing Honda
Start 1st, Finish: 1st (2nd of the season)
“I’m super happy to win the Monaco Grand Prix. It’s such a tricky track and you need a smooth weekend so I’m very pleased with what we have achieved as a Team and of course with Honda. I just had to focus on my own race and make sure I had a clean start. Of course, it all looked under control but to keep your focus for so many laps is the hardest part because it’s easy to relax when you’re in the lead and make a mistake. I think pace-wise, we were always in control because every time someone tried to push me, we were able to respond and increase the gap. I’ve never been on the podium here and then the first time it’s a win, so it’s a bit of redemption for the other races I’ve had here. We are leading the championship and I hope of course to be there at the end of the season because that’s the most important thing so we cannot get carried away. But for now, a massive thank you to everyone in the factory and here at the track, we won the Monaco Grand Prix so let’s enjoy it.”

Sergio Perez – Red Bull Racing Honda
Start: 8th, Finish: 4th
“Today is a great day for the Team and I’m very happy for Max, he did a mega job and now we are leading both championships. The Team did a fantastic job on strategy and the communication throughout the race was excellent. We saved the tires and used them when we needed to which was key and we did two or three qualifying laps to jump the queue of cars to get fourth. I was closing on Lando (Norris) but he had tires left and I never really had a clear chance at him. I was thinking of the long game and getting the points which is important for the Team. I think once I’m more comfortable with the car in qualifying, we’ll be in serious contention and fighting for victories as I’m happy and pretty much there on Sundays.”

Pierre Gasly – Scuderia AlphaTauri Honda
Start: 5th, Finish: 6th
“It was a pretty long race and obviously with Lewis behind it wasn’t easy, I couldn’t make any mistakes and just had to focus on my own race ahead, but I really enjoyed it. Finishing P6 today is good, I think we can be happy with that result and it’s the best performance of the season so far. I believe we took the right strategy today, we had to cover ourselves with Lewis’ pitstop, but it didn’t quite work out. The car performed well today, even if I think we could have achieved more and there are definitely some areas we still need to improve in compared to some of the cars we’re fighting against. I’m still pleased with this result though, it was important for us to be back up near the front and getting some big points again was great for the team.”

Yuki Tsunoda – Scuderia AlphaTauri Honda
Start: 15th, Finish: 16th
“Starting from P16 we knew it wouldn’t be easy. I struggled for grip in the first lap compared to other cars around me and we lost a few positions, after that I was constantly behind cars, despite having strong pace, so wasn’t able to make my way forward. The main thing for me is my Qualifying performance and how I can improve this. I’m going to work hard ahead of the next race so that we can hopefully be in a point scoring position next time out.”