By: Honda | photos Courtesy of: Honda 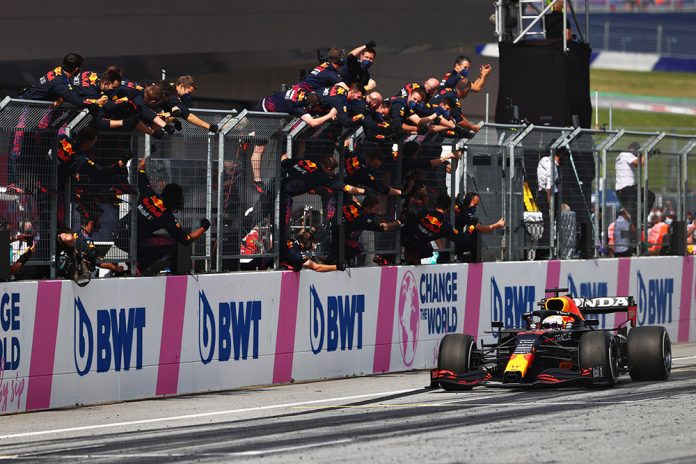 Max Verstappen is a Dutchman by birth but he made Austria his home over the last two weeks, punctuating his stay with a dominant performance in the Austrian Grand Prix where he won the pole, ran the fastest lap and led wire-to-wire for the second consecutive weekend at the 2.677-mile circuit.

Verstappen’s romp at the Red Bull Ring in Austria earned him his fifth win of the season and marked the fifth consecutive victory for Honda – the first time the manufacturer has won five straight F1 races since Alain Prost and Ayrton Senna opened 1988 with seven in a row.

The Red Bull driver easily dispatched Lando Norris at the start and ran away from the field, building a nine-second lead after 20 laps. The lead swelled to more than 20 seconds over Valtteri Bottas and Lewis Hamilton after the first round of stops on Lap 32, allowing Verstappen to make a second stop for tires later in the event. The Red Bull Racing Honda driver used the fresh tires to put the exclamation point on his weekend by running the fastest lap of the race.

Meanwhile, fellow Red Bull pilot Sergio Perez spent much of his afternoon in the crosshairs of the race stewards before a strong late-race stint enabled him to salvage a sixth-place finish. Perez was shouldered off the track by Norris on the opening lap while trying to make a pass for second, dropping him back to 10th. As he climbed back through the field he had two similar incidents with Charles Leclerc, with the Ferrari driver ending up off-track on both occasions. As happened with Norris on the opening lap, race officials issued five-second time penalties to Perez for both incidents, dropping him to sixth in the final order.

Scuderia AlphaTauri’s Pierre Gasly qualified sixth for the fifth consecutive race while his teammate Yuki Tsunoda set a career-best F1 qualifying mark by gridding seventh. Starting on soft tires, both AlphaTauri drivers pitted early in the race, and Gasly found himself in the middle of a tight midfield battle that left him to finish ninth. Tsunoda was given five-second penalties on each of his two pit stops and eventually finished 12th.

With the win, Verstappen took command of the Drivers’ Championship, extending his lead to 32 points over Hamilton. The late charge allowed Perez to maintain his third-place spot in the championship, while Gasly dropped a position to ninth. Honda’s fifth straight win expanded its lead in the Constructors’ Championship to 44 points. After racing on three straight weekends, the series will have a week off before the June 18 British Grand Prix at Silverstone.

Toyoharu Tanabe
Technical Director, Honda F1
Another perfect performance from Max, leading every lap from pole and taking the fastest lap of the race, gave him his third consecutive win and made it five in a row for Red Bull Racing Honda. He controlled the race and it was yet another memorable day at Red Bull’s home track. Sergio dropped to tenth after a collision and picked up a couple of penalties, so he had a difficult afternoon, but he never gave up and so sixth is a good result in the circumstances. Scuderia AlphaTauri started from good grid positions in sixth and seventh, but both Pierre and Yuki struggled for pace and Gasly fought hard for ninth, with Yuki ending 12th, which is disappointing given how they went in practice and qualifying. Now we head to another home race, given that both Honda and Red Bull Racing are based not far from Silverstone. We will try and keep this momentum going, in the hope of an even stronger result across all four cars.”

Max Verstappen – Red Bull Racing Honda
Start 1st, Finish: 1st (Fifth win of the year)
To win again at home at the Red Bull Ring is just incredible. I expected it to be good, but not this good, and the car was on rails. It was really nice to drive and the pace was incredible on both tire compounds. I could push and also look after the tires which is exactly how you want it to be and I could extend my gap lap after lap. Just like everyone else we learned from last weekend and we optimized the car even more by improving the set-up. It’s actually hard to put into words because it was so enjoyable to drive and the weekend was the best it could be, so let’s hope we can carry on in the same way. It’s a great reward for everyone in the Team and it was also very nice to have Honda represented on the podium by Tanabe. The fans were also incredible all weekend, so much orange in the grandstands and it’s just great to see people back and enjoying Formula One at the track. There are of course a lot of difficult races coming up and Silverstone will be interesting with the Sprint Race to mix things up. But for now, I’m really happy. You don’t often get this type of race, so we all have to enjoy it.”

Sergio Perez – Red Bull Racing Honda
Start: 3rd, Finish: 6th
I’m obviously not very happy with my race today. On the fourth lap I had the position and I out-braked Lando but he pushed me off the track which pretty much ended my race. As for the other incidents with Charles, I still have to review the situations and look at the incidents because I thought that I was ahead in both of them, especially the second one but it’s hard to say right now. I braked as late as possible, we were in dirty air and we had very old tires so I lost the rear on the second one into Turn 6. I’m very sorry for Charles and how I affected his race because that’s not the way I like to race. I don’t feel happy with myself for compromising the race for another driver. But I am very happy for Max and the rest of the Team, it was great that we could get more points today at our home race at the Red Bull Ring. We move on and I’m looking forward to the next race at Silverstone.”

Pierre Gasly – Scuderia AlphaTauri Honda
Start: 6th, Finish: 9th
“I think today was harder than we imagined, but the good thing is we’re consistently scoring points. We thought we would benefit more from the two-stop strategy, but we struggled more than expected on the Softs at the start of the race. There are some positives to take away though and we still showed some strong pace out there.  We’re continuing to battle at the top of the midfield but it’s disappointing to not be finishing further up the grid today. We’ll review all the data tonight and then look forward to Silverstone, which is a track I love.”

Yuki Tsunoda – Scuderia AlphaTauri Honda
Start: 7th,,(Career Best) Finish: 12th
“It’s been a difficult day for me. I struggled with pace during the race and tire management was really tricky. My Qualifying was good yesterday so it’s frustrating, but we need to go away and review the issues from today, so we don’t make the same mistakes again next time out in Silverstone.”