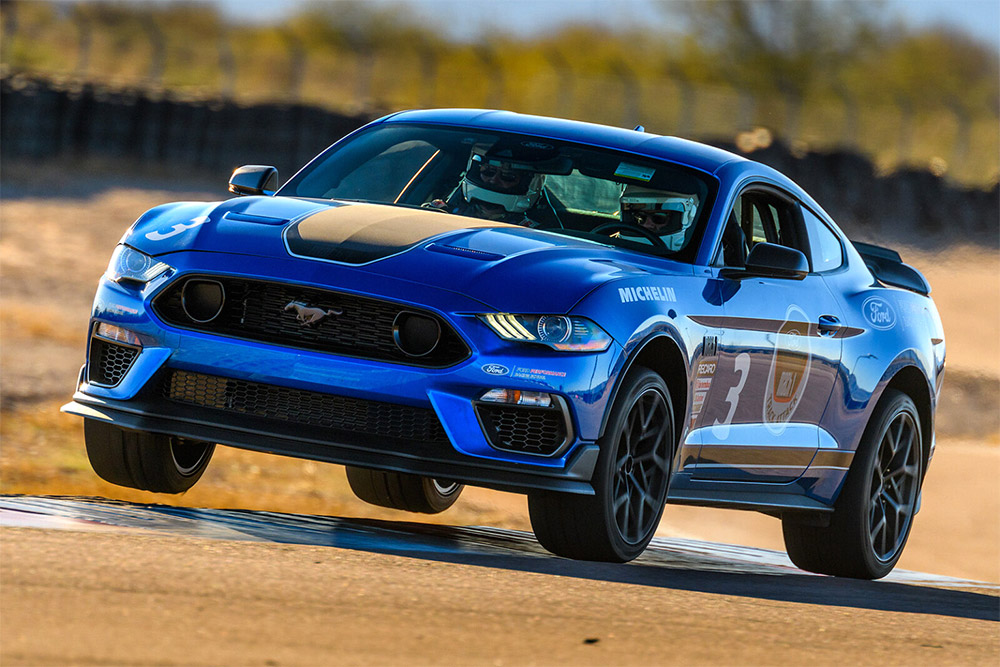 When the invite came to spend time with the Ford Performance team, The Speed Journal gladly accepted. The Mach 1 Track Tour stop at the Radford Racing School in Phoenix was the perfect way to spend a sunny February day. Speed Journal Principal Jeff Francis packed his bags and headed for Arizona. 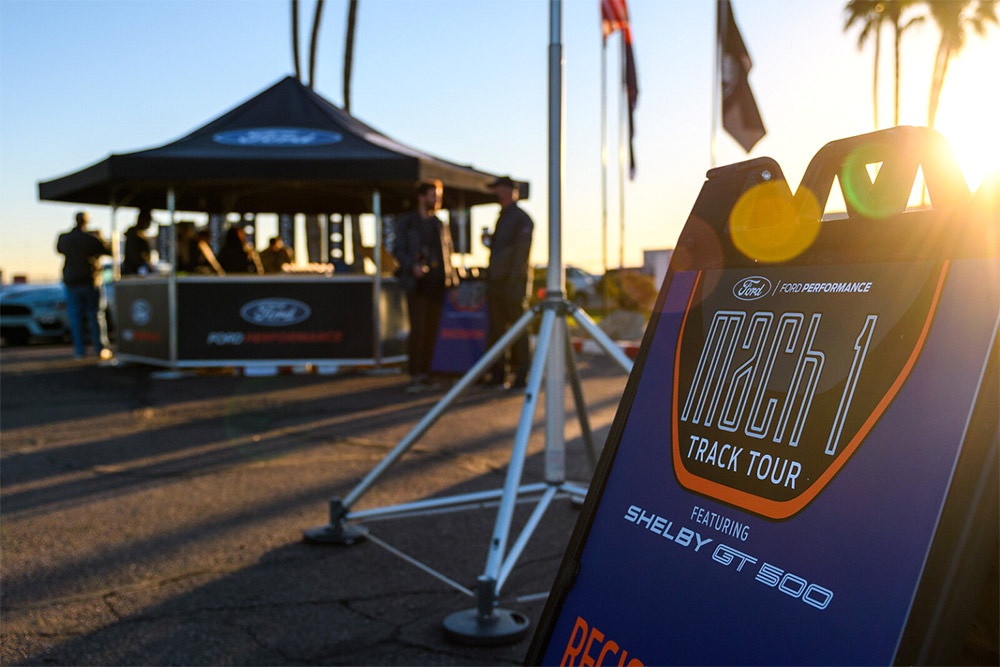 The event showed off the current Mustang in various flavors, including the Mach 1, Shelby GT500 and Mach-E. The Shelby GT500 is a fire-breathing muscle car. The brand-new Mach 1 is the spiciest street Mustang that doesn’t carry a Shelby badge. As much as the Mach 1 and GT500 show the importance of carrying on the Mustang performance tradition, the Mach-E takes the Mustang in completely new directions with an SUV body shape and electric power. 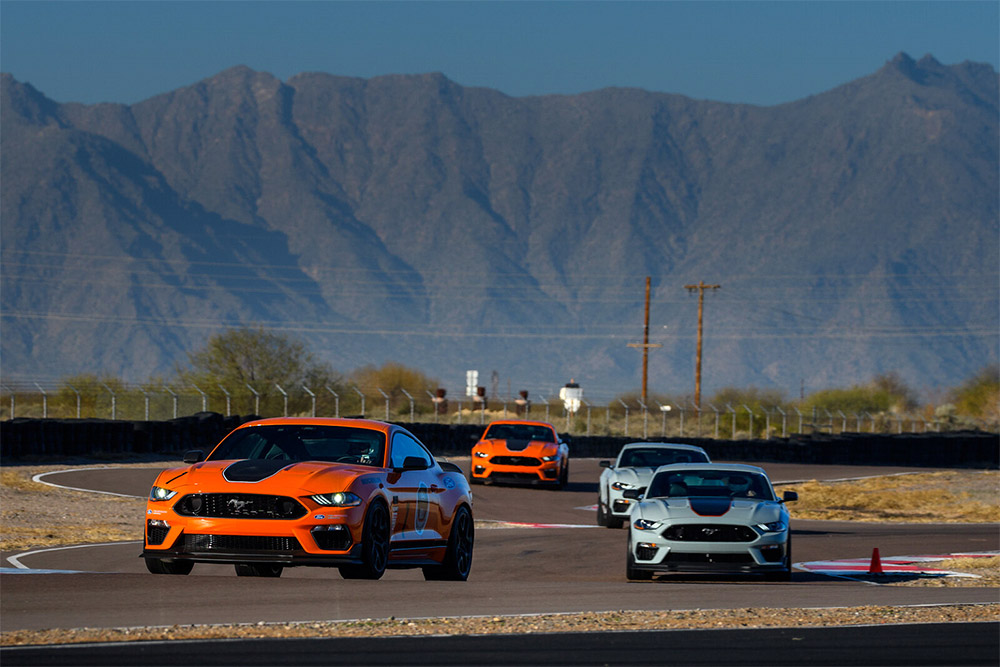 The Ford Performance team arranged a mix of presentations and drive time on a road course and dragstrip. Jim Owens, the man overseeing the marketing charge for anything with a Mustang badge, led the program. Owens worked with Carroll Shelby and Shelby performance for years, so he’s a caretaker for the brand but also an enthusiast. Owens effortlessly outlined decades of Ford history, recalling the deep ties between Ford and Shelby that gave the Blue Oval many of its performance credentials. 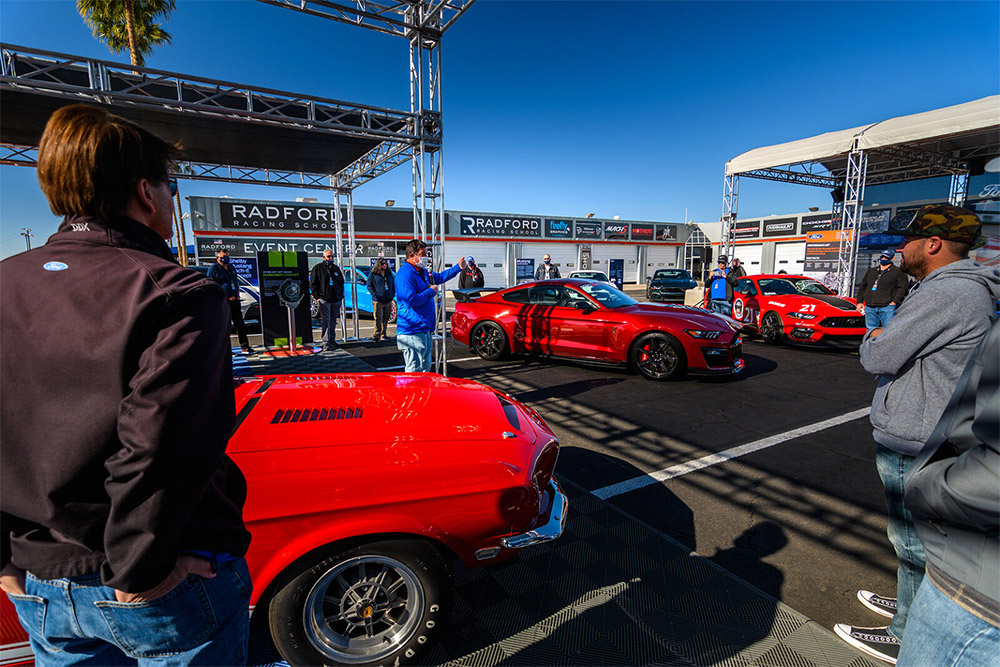 While Shelby made an indelible mark on Ford history, Owens also included earlier Ford history, such as the story of Henry Ford struggling to find business success initially. His first company, the Detroit Automobile Company, failed. In 1901 he built a racecar to prove his product named Sweepstakes to outrun favorite Alexander Winton in a head-to-head race. Unlike Ford, Winton was an established manufacturer and driver. The victory earned Ford publicity and paved the way for financial resources that eventually established the Ford Motor Company. The point was clear – racing and performance has been part of Ford from the beginning.

If the group of Shelby GT500 examples nearby wasn’t enough of a sign, the close Shelby connection was emphasized with the presence of Aaron Shelby, Carroll’s grandson, and Gary Patterson from Shelby American. The ongoing collaborations between Ford and Shelby are in the hands of people who appreciate the history and are passionate about maintaining it. 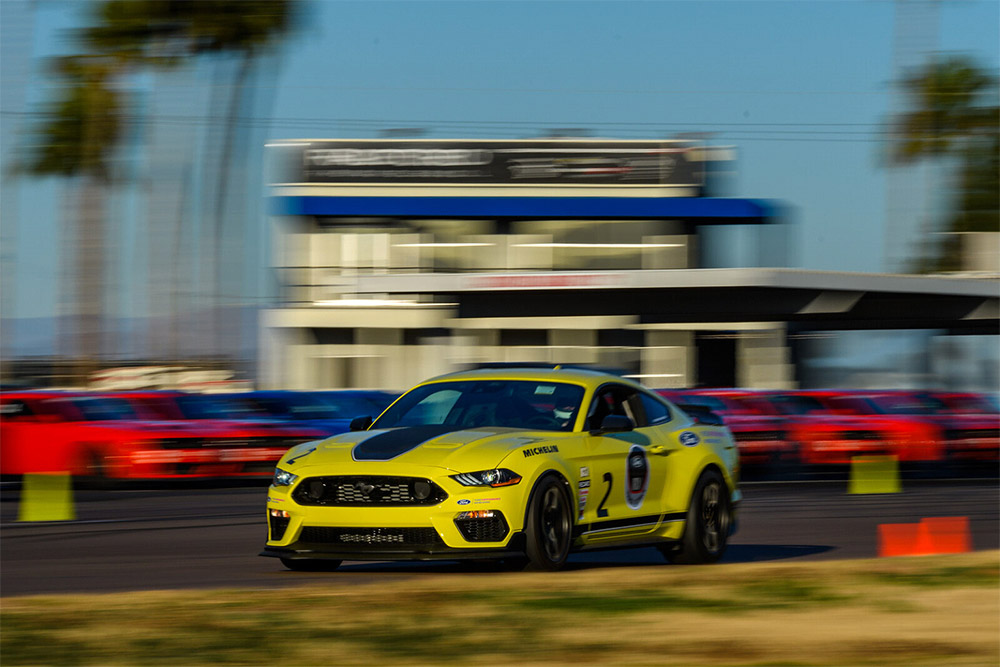 The venue itself had another long-time Ford connection. Bob Bondurant raced the Shelby Cobra and Daytona Coupe in the 1960s, most notably taking the fight to the might of Ferrari. After Bondurant’s professional driving days, he created the template for driving schools and ran his own school for years. Thousands improved their high-performance driving skills in Bondurant courses and many learned at the wheel of Ford products the school featured in its fleet.

The Radford Racing School took up the reins in 2021 after the Bondurant school closed. The Radford team renamed and relaunched the school and rejuvenated the facility, but Bondurant history will always be part of Ford history. 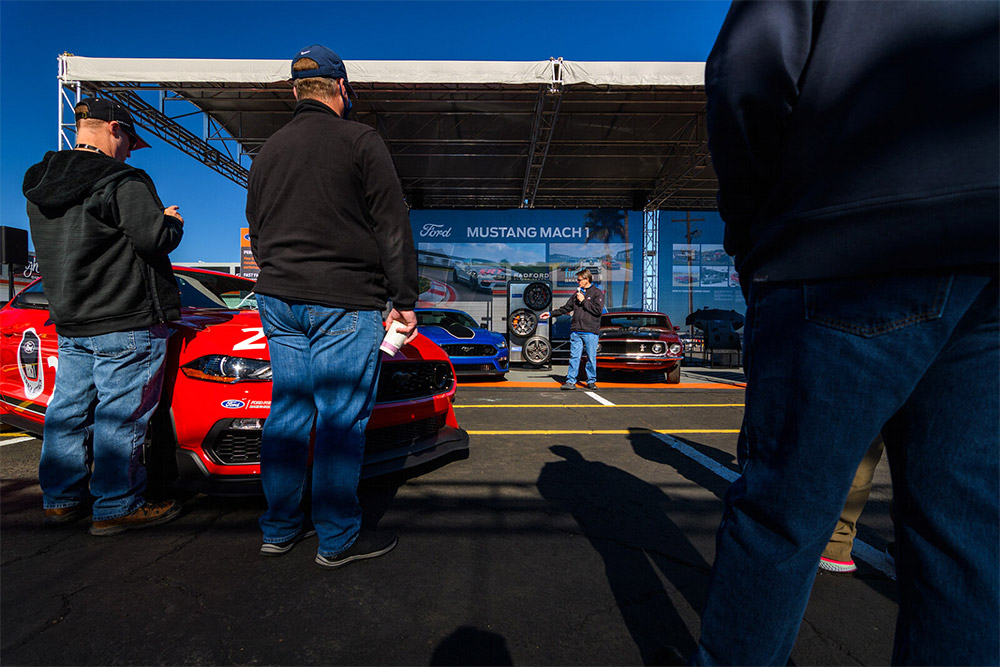 Michelin representative Eric Schmedding provided the perspective of a partner. Tires are a car’s sole connection to the road and play a critical part in the driving experience. Michelin was part of the Ford GT project when the car existed only in drawings and scale models. Schmedding told the story of Michelin’s involvement with the Ford GT racing program, including the successful 2016 Le Mans win. Michelin embedded an engineer with the team and that engineer is still working with Ford Performance to develop Michelin’s tires for current performance vehicles. 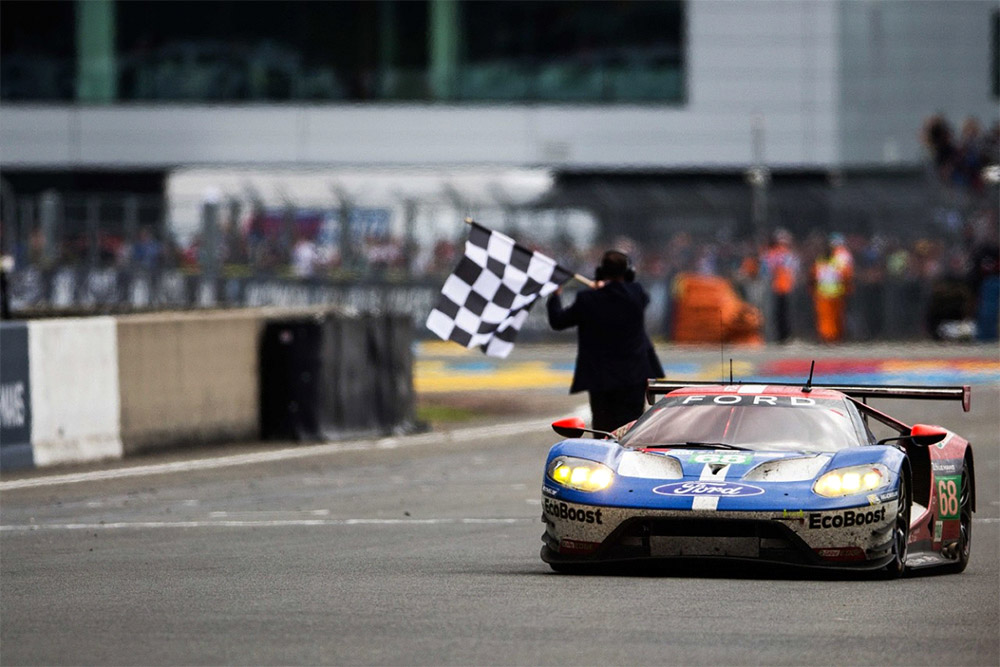 Similar to the tires keeping the car connected to the road, the seat keeps the driver connected to the car. Seating supplier Recaro gave an overview of seat design, bolsters and lumbar supports. Recaro’s deep roots as a seat maker stretch back for decades. 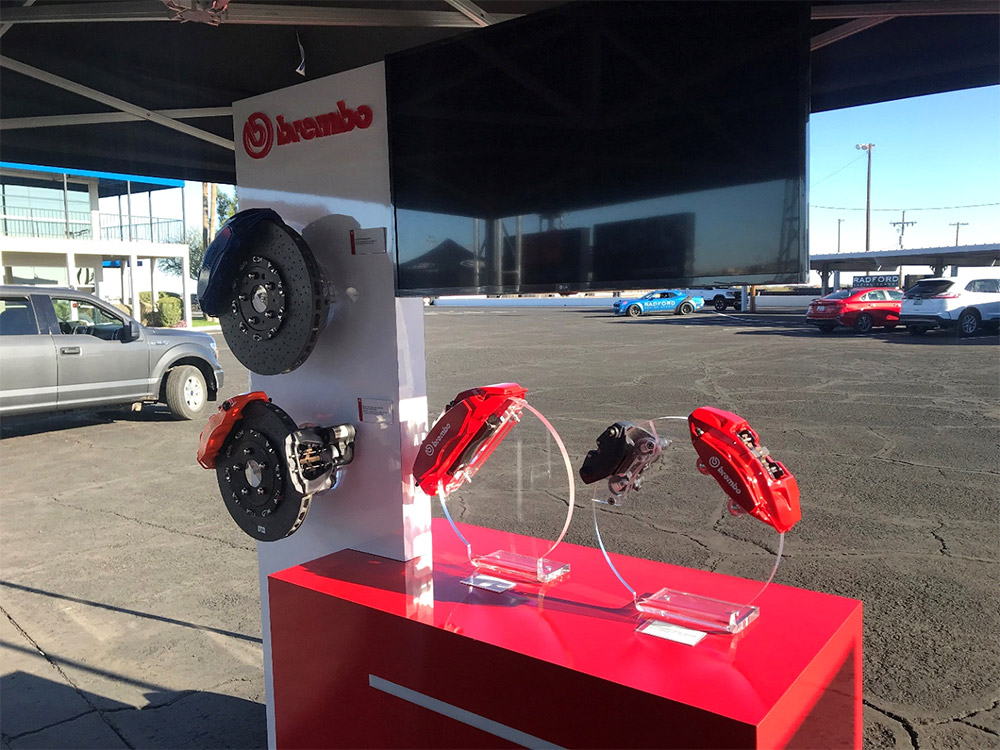 Displays included a variety of vintage Mustangs and a selection of Mustang parts. It was a treat for the camera phone as guests snapped photos of wheels, brake calipers, engine and gearbox parts sliced in half to show their internals.

With the time for talking done, it was time to see Ford Performance in action. The group broke out into smaller groups to experience the Mach 1 and Shelby GT500 in action. 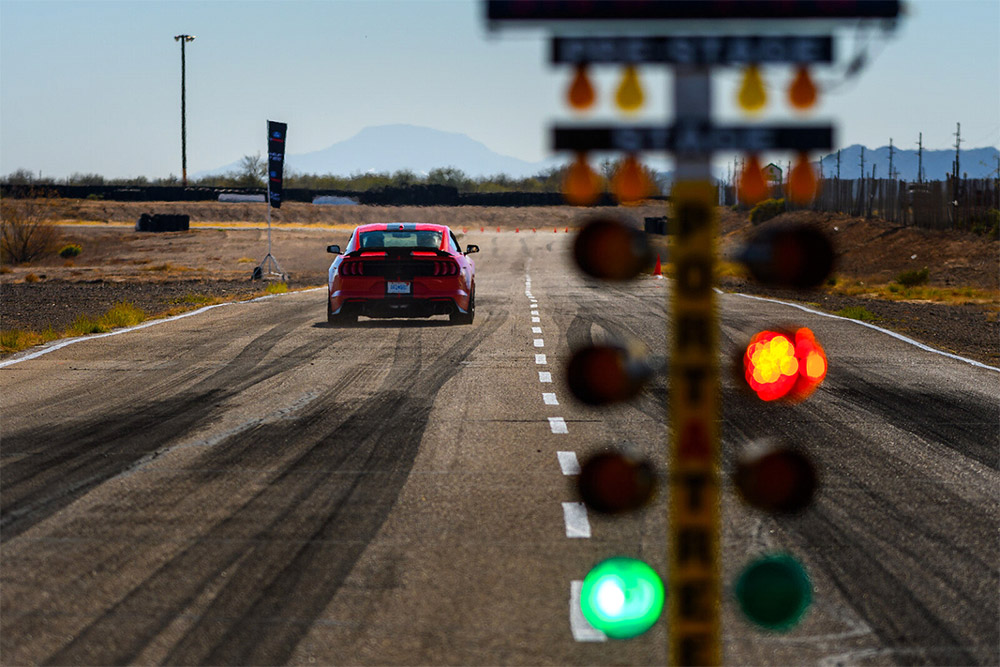 The group first tried out the Shelby GT500 on the drag strip. A zero to 100mph blast was suited to the car’s old fashioned muscle car sprit, but didn’t stop there. Getting from 100mph to zero also had the adrenalin pumping.

Guests positioned their Shelby GT500 at the starting line, with the traditional Christmas Tree lights ready to release the all 760 supercharged horsepower from the mighty 5.2-liter V-8 engine. The sequence was simple. Engage launch control, hold the brake with the left foot, and smash the accelerator to the floor with the right foot. When the green light flashed, a quick slide with the left foot off the brake unleashed the roaring beast. 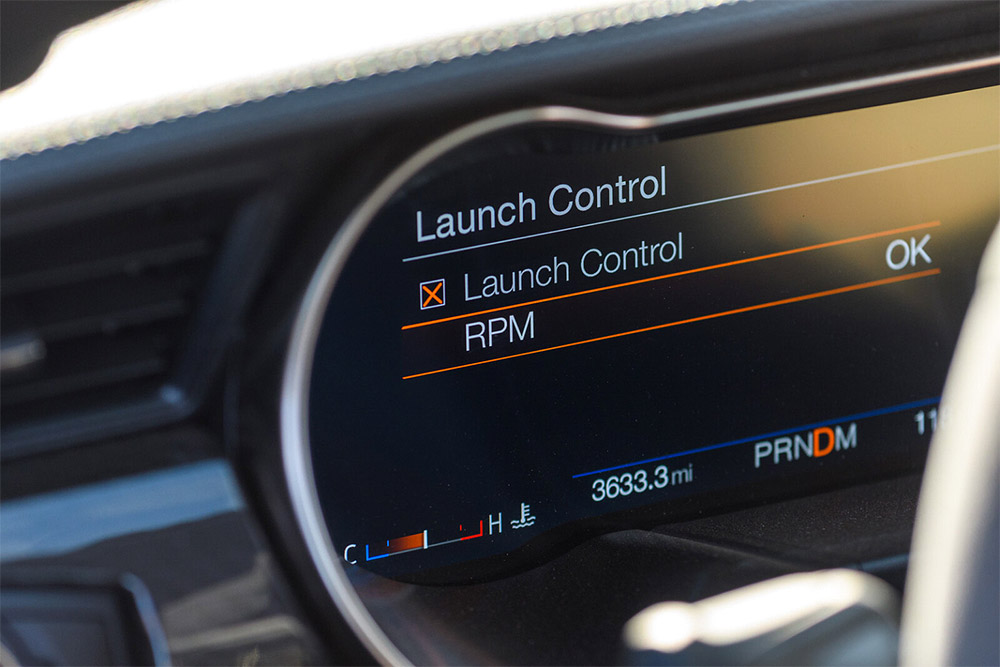 Incredibly, the launch control and Michelin tires manufacture friction and grip rather than smoke and sliding. The seven speed dual clutch automatic transmission flicked through the gears with the rear end squirming slightly at each shift. Ford worked closely with Tremec to develop a dual clutch transmission that shifts in just 80 milliseconds. The collaboration also utilized Ford’s professional race driver Billy Johnson in creating an overlay which would prompt the new Tremec dual clutch to shift at the same point as the professional racing driver on the manual transmission. 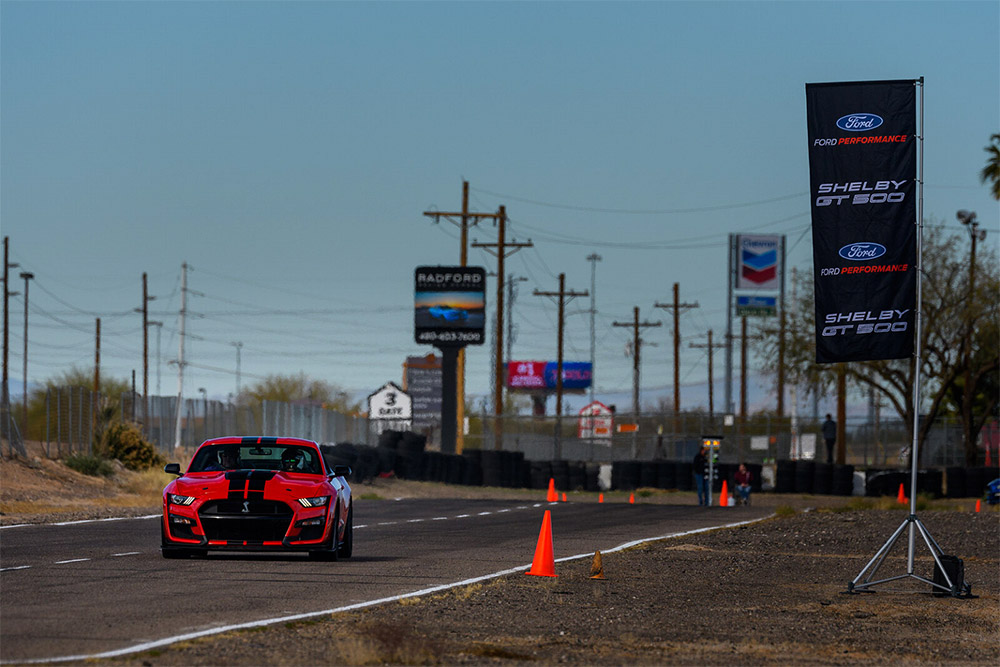 The electronic wizardry of traction and stability control worked at hyper speed to keep the GT500 pointed straight ahead. The engine wailed and growled, adding a soundtrack to complement the experience. The importance of Recaro seat design made a lot more sense when the driver felt as if they’d been shot out of a cannon due to the ferocious acceleration. 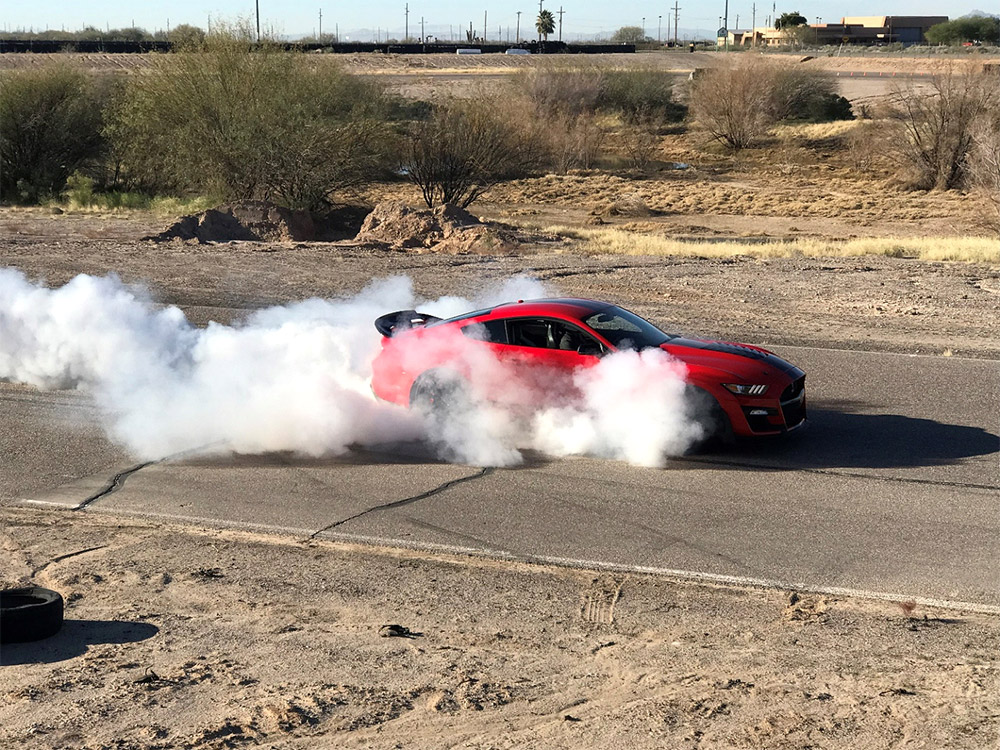 GT500 buyers also get a line-lock option when they take their car to the drag strip. A line-lock applies brakes to the front wheels while letting the rear wheels spin freely to generate temperature. Hotter tires are grippier and four to five seconds of rear tire spinning is all it takes. Guests didn’t use the line-lock feature for their runs, but an instructor made a smoke show to illustrate. 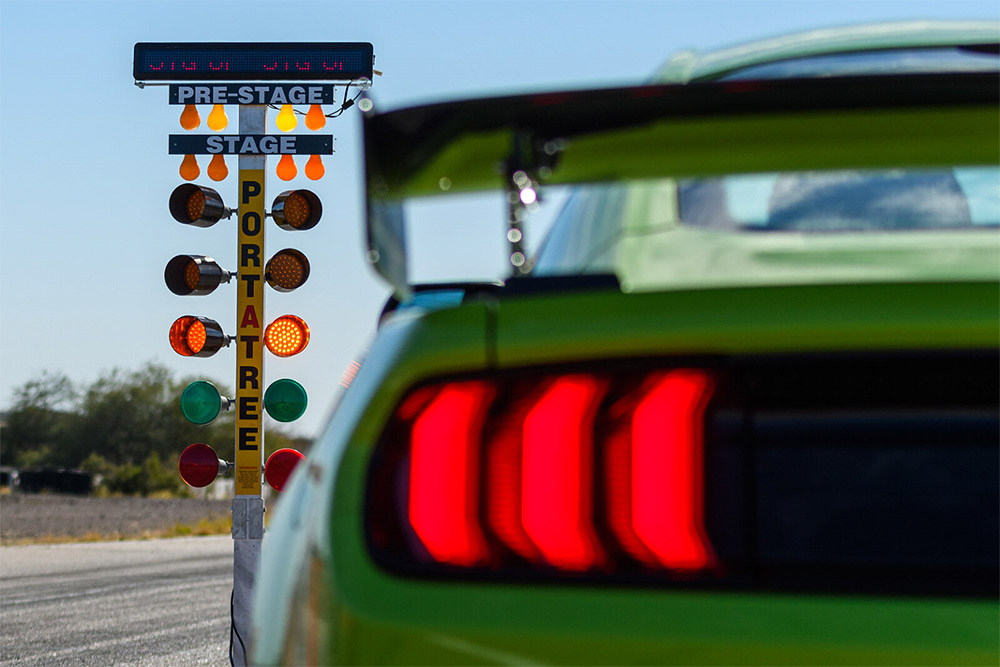 Once underway, 100mph comes quickly. Once there, the drivers mashed the brakes and the massive Brembo brakes and anti-lock braking system hauled the land missile back to a stop. Everything happened quickly in a bout of controlled panic braking. Ford says the GT 500 requires only 10.6 seconds to go from zero to 100mph and back to zero. 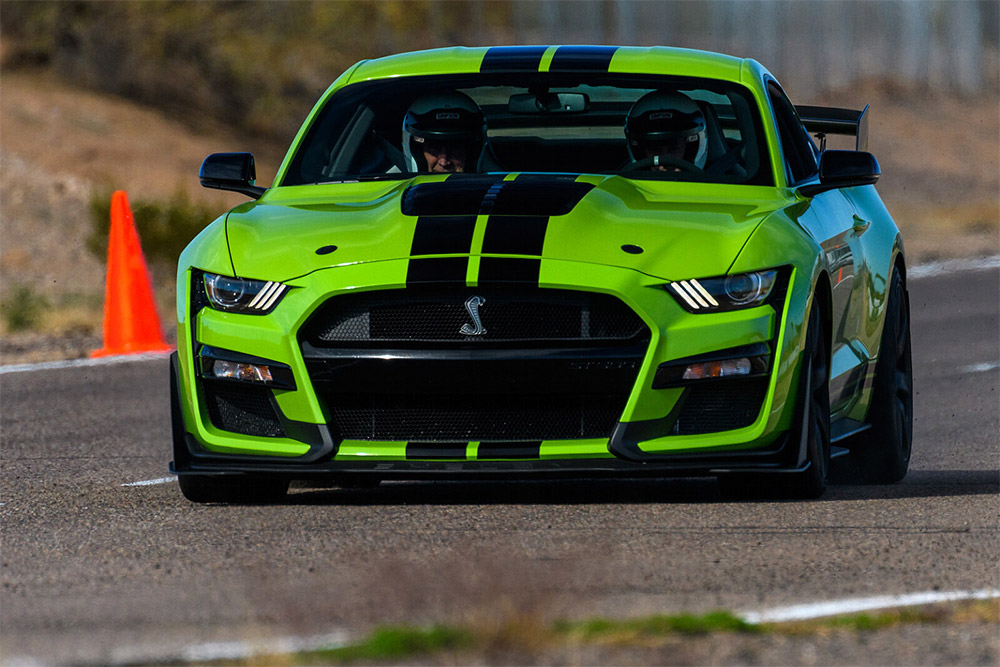 Guests got three runs and needed all three to wrap their heads around the experience. The first run was mostly a “what just happened” and the second was more comfortable knowing what to expect. The third was flat out fun. 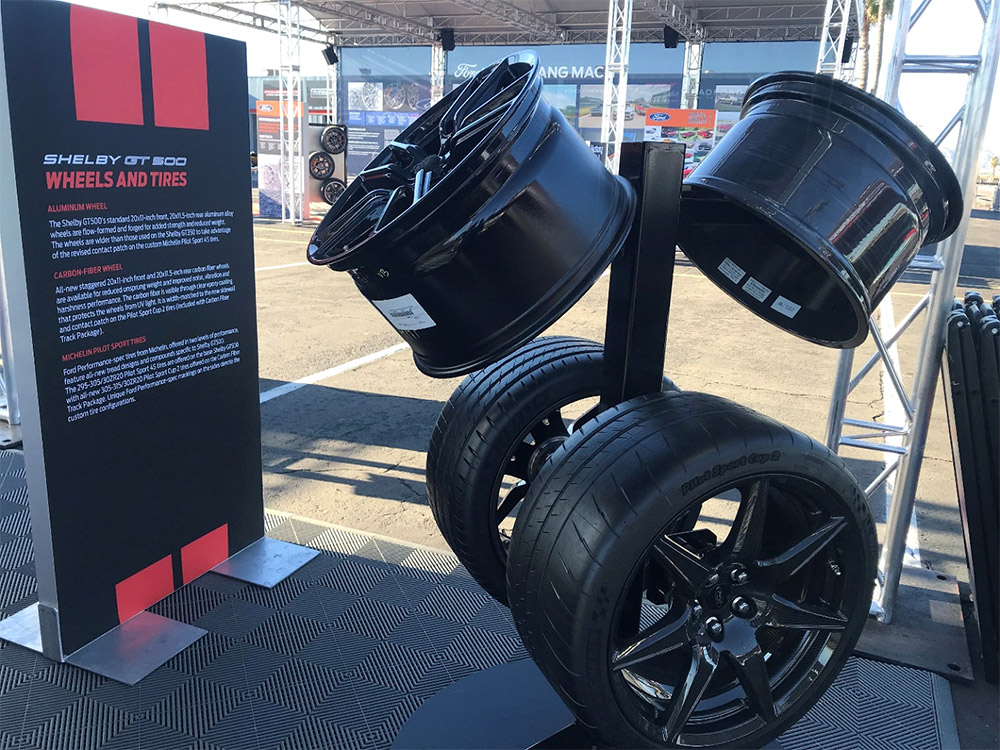 Ford had an original 1967 Shelby GT500 wheel and tire on display along with a caliper and wheel from the 2022 GT500. The demonstration of performance evolution was clear when Owens passed around a GT500 carbon fiber wheel that blended strength with weight savings. The massive Brembo brake caliper from the new GT 500 was wider than the 1967 car’s tire patch. 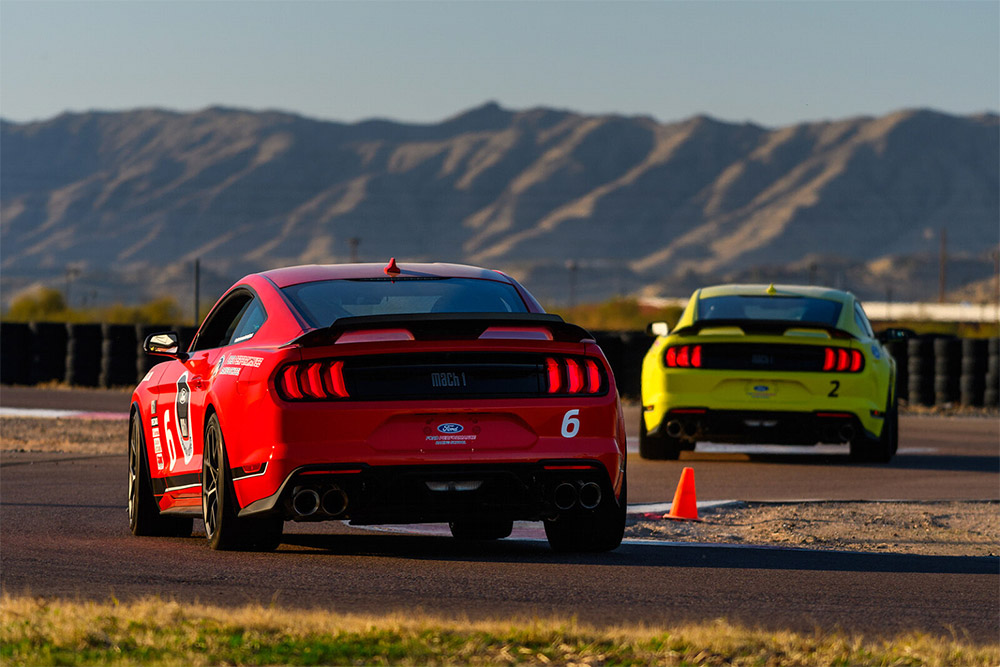 After dragstrip time with the Shelby GT500 ended, the group turned to the Mach 1 for lead-follow laps behind an instructor. The Mach 1 effectively replaces the Shelby GT350 and resurrects a nameplate unseen on a Ford vehicle for many years. It doesn’t have a Shelby badge but Ford has made sure that the Mach 1 has sufficient performance credentials to hold its spot in the Mustang line-up. 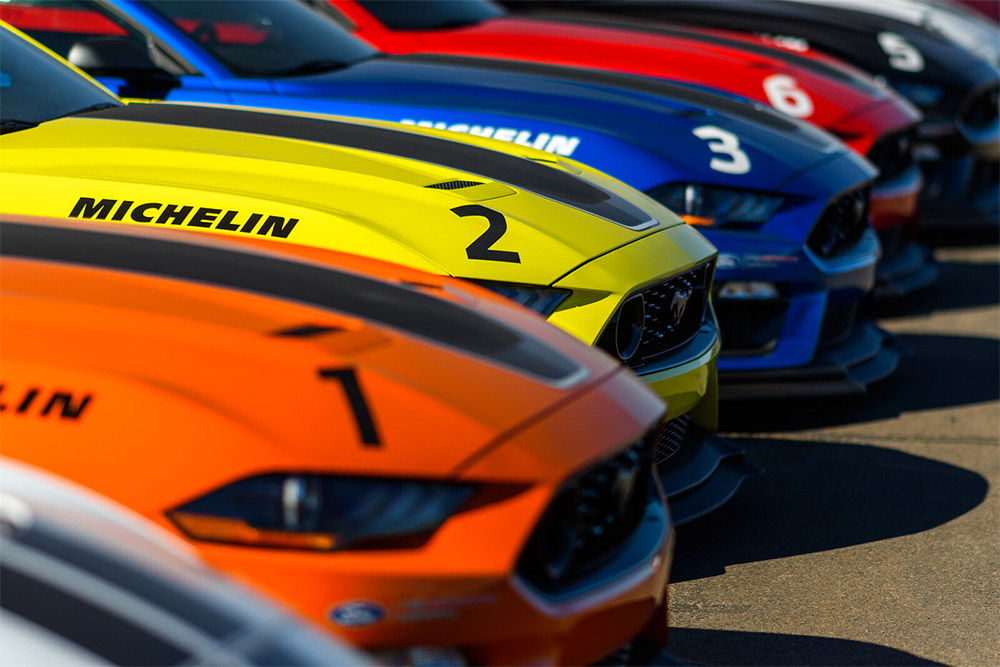 The Mach 1 bodywork creates a distinct design identity. The sharp scoops around the nose look aggressive and manage the air. The splitter at the bottom of the nose wraps around the bumper edges and adds downforce in the corners. Ford designers breathed on the interior as well, walking the line between track-inspired but not track focused. The 5.0-liter engine is a mainstay of the Mustang family and the Mach 1 sticks with that formula and optimizes it. The Mach 1 can just as easily be used for daily driving as weekend auto-crossing. 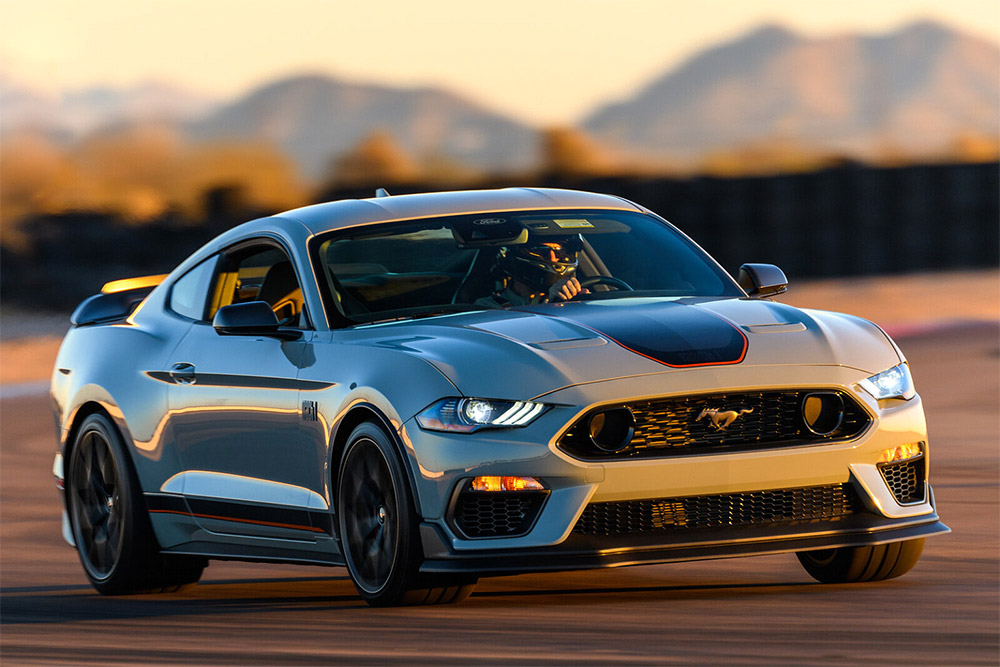 The event was an introduction to the Mach 1 rather than a racing event or performance school. Guests were gently reminded that talent scouts from Roger Penske or Jack Roush weren’t on hand. The pace set by instructors was enough to get a sense that the Mach 1 would be well suited to a road course but not enough to really get into a rhythm and test the car. Features such as the no-lift shift manage quicker shifts and reduce power loss. Both should be particularly useful for drivers looking to race their cars on the weekends. 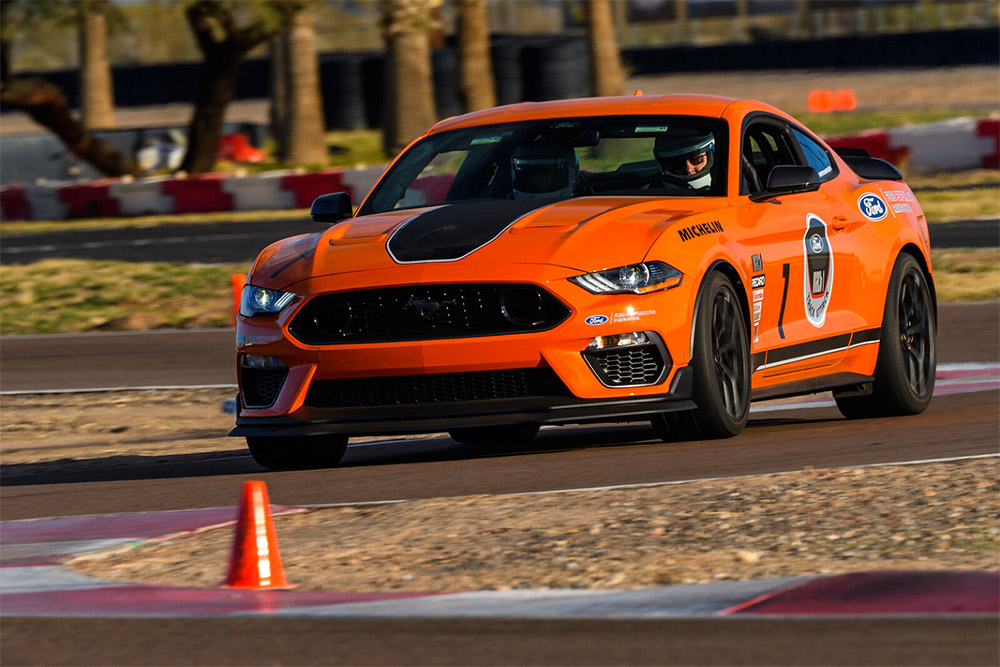 Laps finished, instructors abandoned the moderate-speed program and dialed up the gusto to give guests rides at speed. Aside from being incredibly fun and clearly demonstrating impressive driving skill, the hot laps showed the Mach 1’s performance potential.

Having the GT500 and Mach 1 together at the same event provided quite the contrast. Whereas both are performance-oriented, they are very different. The GT500 bulging bodywork strains to keep its muscle contained. Its lines are sharp and edgy. The Shelby snake badges are unsubtle. The interior is similar to other Mustangs but with tweaks to finishes and trim materials, and installation of Recaro bucket seats. 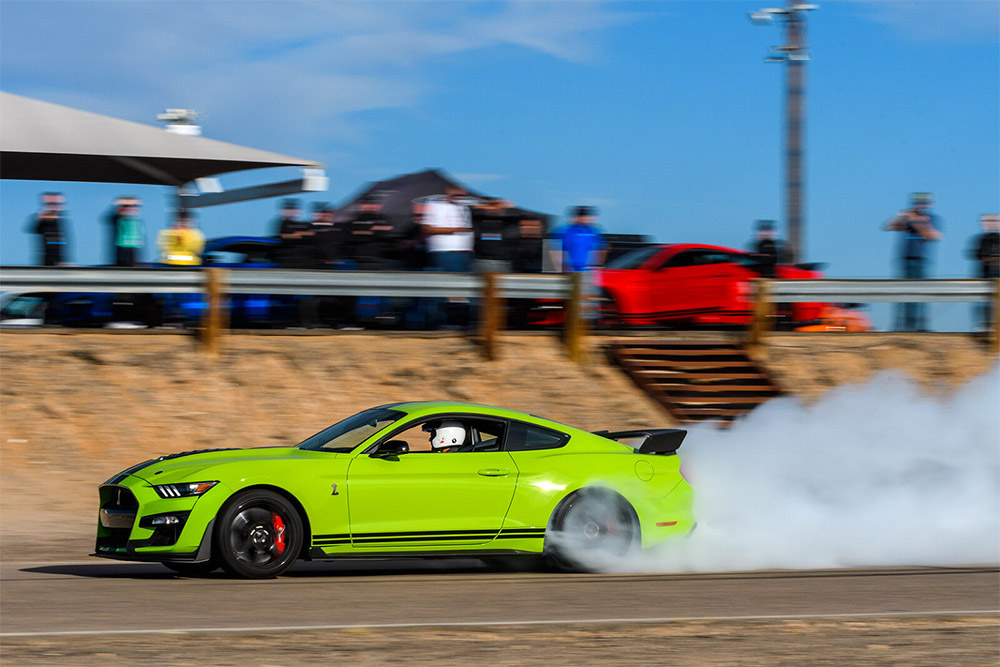 Those with bigger budgets can opt for a track package upgrade that swaps carbon fiber materials for selected parts and deletes irrelevancies like rear seats. The original Shelby GT500 roamed the earth more than fifty years ago and the modern-day version holds up its legacy. It will outrun most other cars – many with much higher price tags. 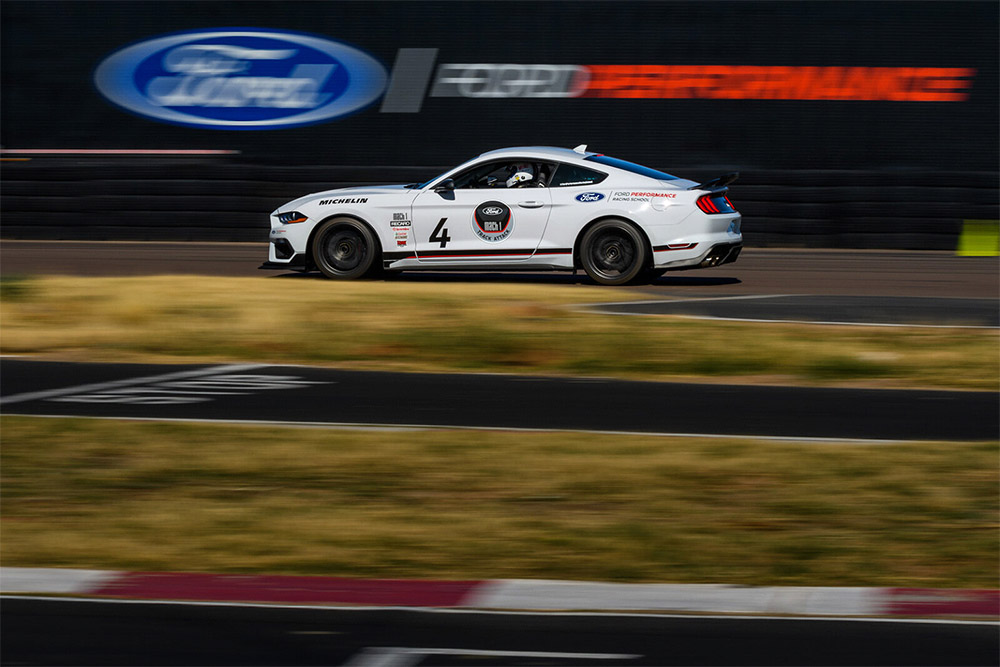 The Mach 1 fits neatly between the Mustang GT and Shelby GT500. It may not menace the neighbors as the GT500 might, but it also isn’t going to blend into the background or be confused with a “regular” Mustang. Available with either an automatic or standard manual transmission, the Mach 1 adds another chapter in the broader Mustang book that has an option for every buyer. 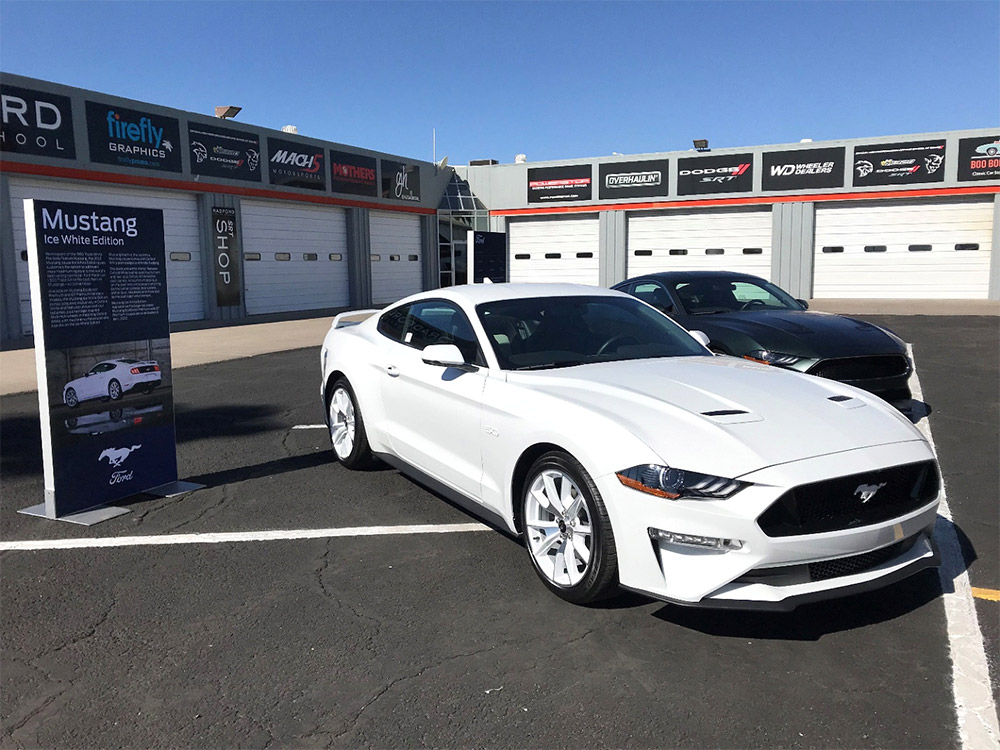 The philosophy extends to design visuals as well. For example, different Mustang models are available in an Ice White Edition which adds white-on-white styling. The treatment touches both exterior and interior and also extends to tail lights, wheels, and mirrors. The Mach-E is another example of extending the Mustang brand to those interested in an electric vehicle with an SUV shape. 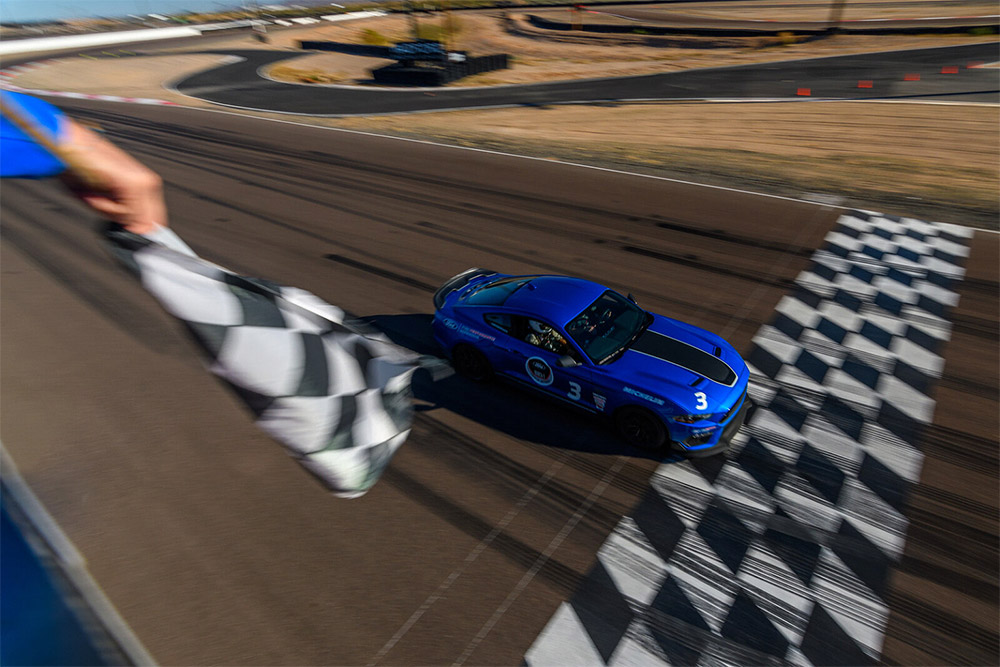 The Mach 1 tour was a great opportunity to hear directly from the people that make Ford Performance tick. With thanks to Ford for the invite, The Speed Journal appreciated the preview and taste of the Shelby GT500 and Mach 1.