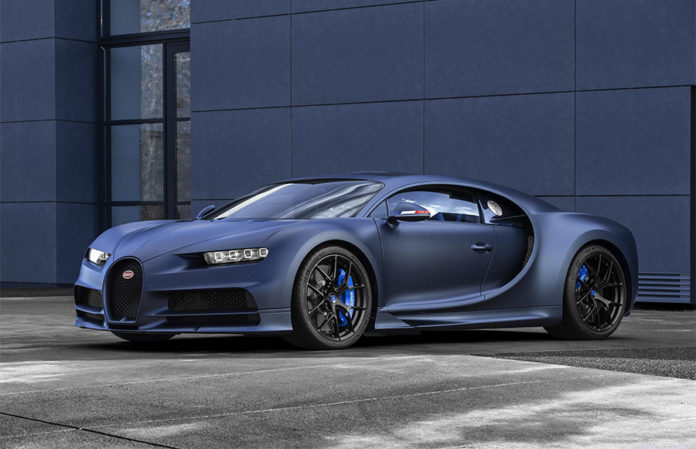 110 years. Scarcely any other luxury car brand can look back on as long a tradition as Bugatti. The French hyper sports car manufacturer is celebrating this fantastic anniversary with a special edition of the Chiron Sport limited to 20 cars. This new edition is not only extremely exclusive but also pays tribute to France.

“With the limited Chiron Sport ‘110 ans Bugatti’, Bugatti is ushering in the 110th anniversary of its foundation. At the same time, we are underlining our origin and our French roots in Molsheim,” says Stephan Winkelmann, President of Bugatti Automobiles S.A.S. “Molsheim in the Alsace region of France is an essential element in Bugatti’s brand history and this is also where we are planning our future.” 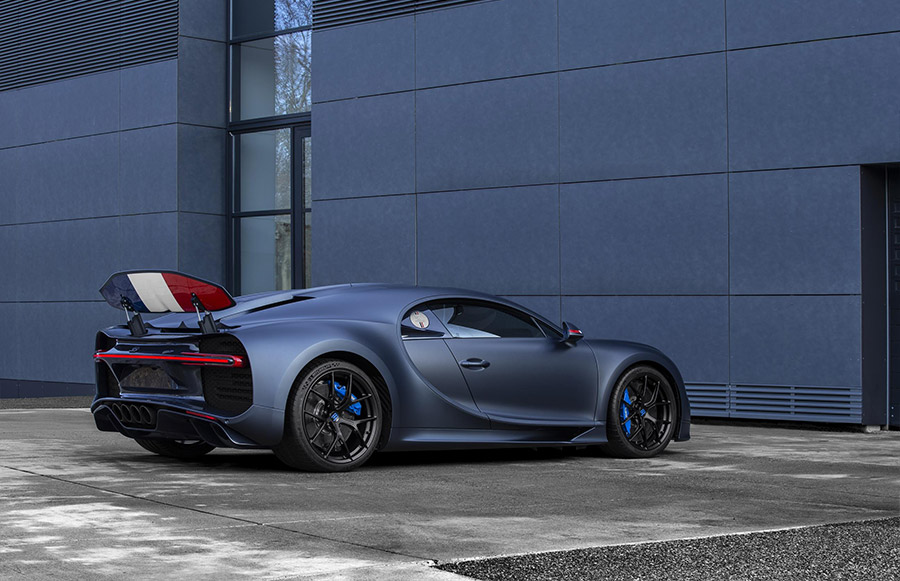 Tricolour decorates the “110 ans Bugatti” in tribute to France

The new Chiron Sport “110 ans Bugatti” bears one of the most famous symbols of a proud nation. The French tricolour “Le Bleu-Blanc-Rouge”, with its colours of blue, white and red, decorates the body and interiors at several points and harmonizes perfectly with the extraordinary Chiron Sport. The flag originally symbolized the union between monarch and people in the phase of the constitutional monarchy. Since the end of the monarchy, it has represented the French Revolution with its famous ideals of liberty (blue), equality (white) and fraternity (red).

Taking a first look at the Chiron, you may be surprised to see that the colours of the French flag are shown as a mirror image on the right-hand side of the vehicle. This is also the arrangement adopted on French official vehicles, where the standard has the colour of liberty (blue) to the fore on both sides. 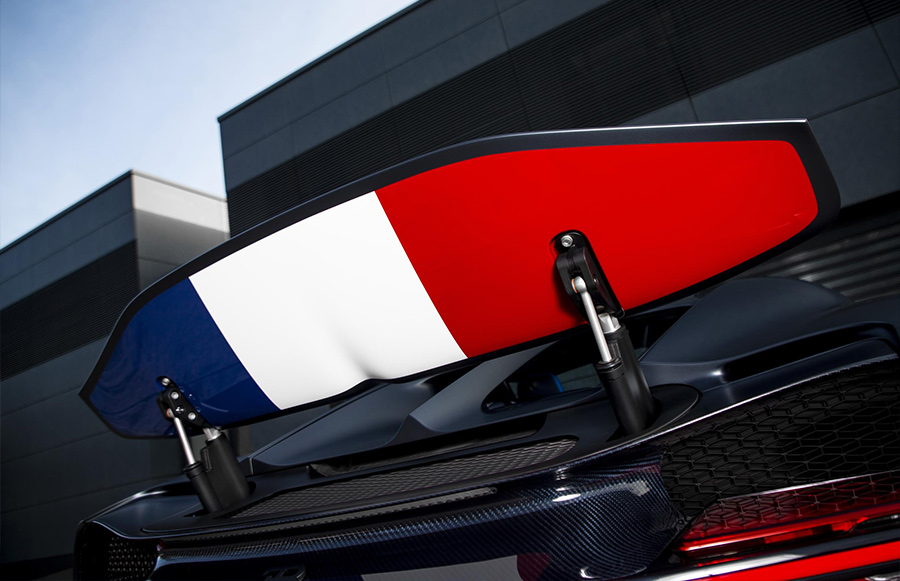 The body and the front end are made from carbon fibre and the Bugatti line and the typical Bugatti radiator from aluminium. The matt Steel Blue paintwork at the rear of the car, produced in a complex process, has a sheen like hot-rolled steel. The typical Bugatti line, the dominant “C” surrounding the passenger compartment, is also painted Steel Blue. The front end consists of exposed carbon fibre in Steel Blue Carbon, once again a matt colour suggestive of steel. The two-tone colour scheme is reminiscent of historic models: in the 1920s, this type of paintwork was a sign of luxury and exclusiveness, while it now signals a sporting character and high technological competence. In the case of the Chiron “110 ans Bugatti”, the colour scheme divides the bodywork into the monocoque and engine compartment.

Behind the alloy wheels painted in “Nocturne” matt black, the bright blue (French Racing Blue) brake calipers are visible. To obtain an immaculate finish, the aluminium filler cap is sandblasted and hand-polished. The “110 ans Bugatti” emblem, with the French flag running vertically through the logo, features at the centre of the cap. 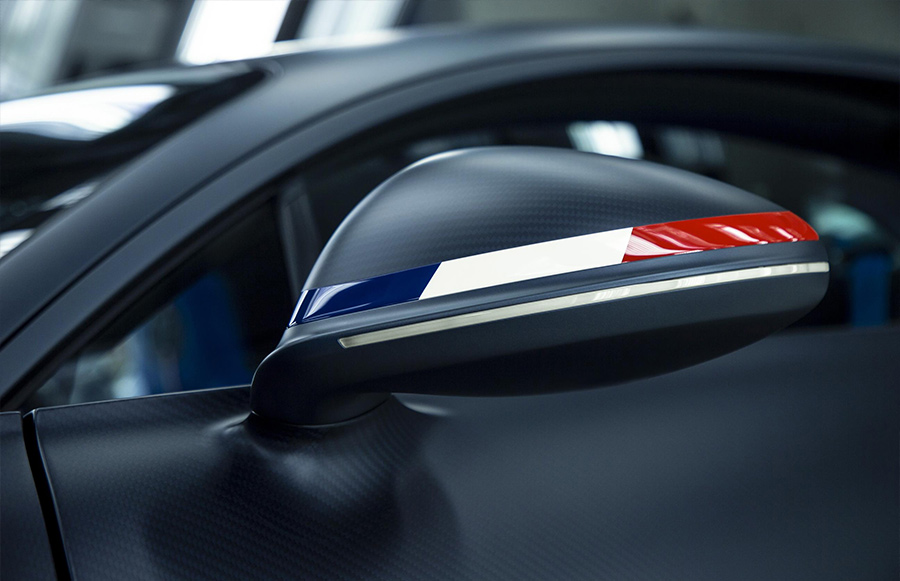 The rear end is dominated by the diffuser and bumper in glossy Steel Blue Carbon with the contrasting matt black exhaust system. The underside of the rear spoiler boasts the French flag over its entire width. The rear spoiler mechanism is anodized in matt black to harmonize with the matt black Ettore Bugatti logo on the centre of the rear, the matt black wheels and the matching sports exhaust system. The Sky View roof consisting of two fixed glass panels above the driver’s and passenger’s seats, available as an option on the Chiron, is a standard feature of the special edition. These panels have a newly developed laminated structure with thin glass and four intermediate layers.

The French tricolour also features at several points in the interior of the “110 ans Bugatti” special edition. These include the two headrests and the back rests of the sports seats, decorated by high-quality embroidery with the French flag in a vertical position, and the 12 o’clock mark on the leather steering wheel. The sports steering wheel combines matt carbon fibre with a blue leather cover. 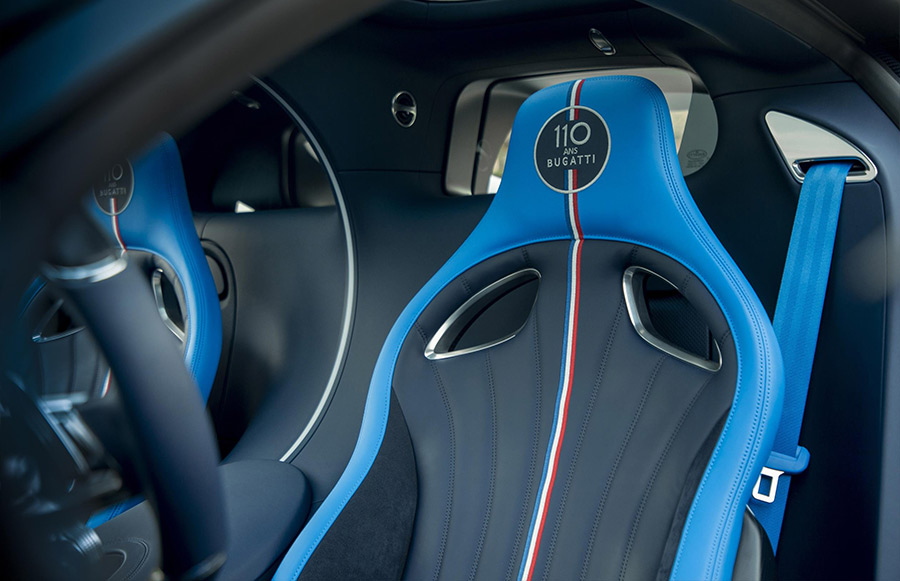 Carbon fibre is also be found on the nacelle, steering wheel, steering column and seat trims. The interior is upholstered in soft Deep Blue leather. The door trims, sides and seat areas of the sports seats are covered in Alcantara. Bright French Racing Blue elements on the contours of the seats, stowage compartments, belt trims and the leather of the window buttons provide a sporting contrast. The key of the “110 ans Bugatti” is surrounded by three sewn leather patches in the colours of the tricolour.

Another special feature bearing witness to the high level of craftsmanship is a specially crafted medallion in the central console stowage space, made of solid silver with enamel inserts, positioned on a carbon fibre plate. 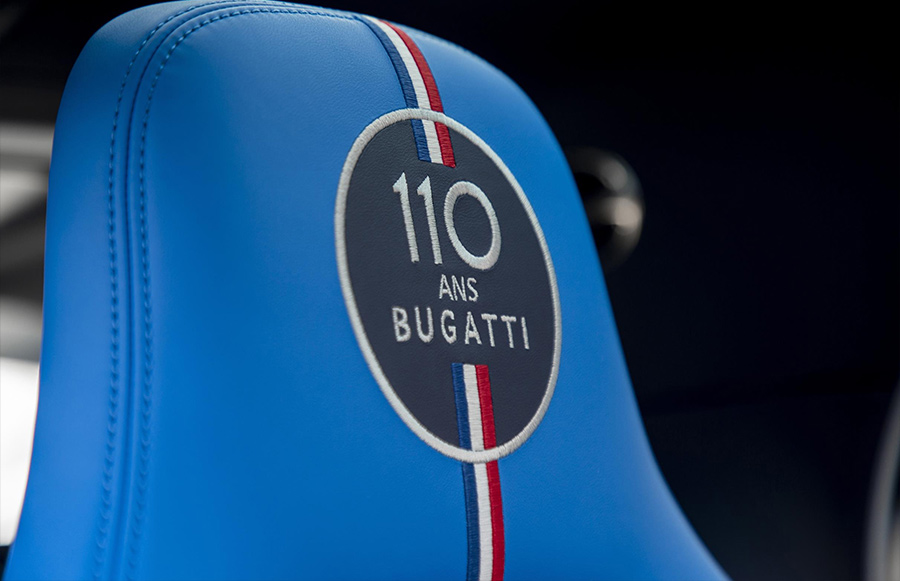 Hyper sports cars have been a Bugatti tradition since the establishment of the brand – they are part of Bugatti’s DNA. When Ettore Bugatti designed his first model in 1909, the Type 10, he deliberately broke new ground in terms of design. The Type 10 was light, small and nimble with an adequate power output – an agile racing car with function following form in an uncompromising way. At the beginning of the 20th century, this was a new approach and it has defined the mission of Ettore Bugatti’s successors to the present day. With the assistance of some partners, Ettore Bugatti set up in business at a disused dyeing plant in Molsheim at the end of 1909. Shortly afterwards, he continued the development of his Type 10 to create the Type 13 – the first official Bugatti model.

This first Bugatti was followed by some high points in the history of the automobile. In the 1920s, these included the Type 35, one of the most successful racing cars ever, as well as the Type 41 Royale, the epitome of absolute automobile luxury. The founder’s son Jean Bugatti created his own memorial with the Type 57 SC Atlantic, a design manifesto. 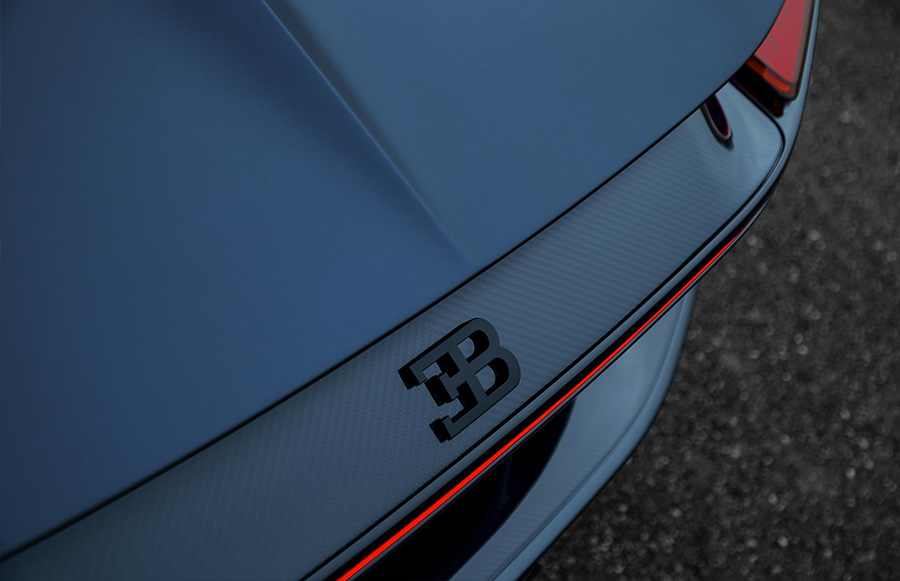 The new Bugatti era started with the Veyron 16.4

The Veyron 16.4 with more than 1,000 PS, produced between 2005 and 2015, brought the tradition of Bugatti forward to the modern era. The Chiron, which has been made since 2016 in weeks of hand crafting, is a modern luxury hyper sports car that fits seamlessly into the Bugatti family tree. It combines the technical excellence, style and iconic character of the historic vehicles, reinterpreting them as the renaissance of legendary cars produced by a legendary brand. Since 2018, this has also included the Bugatti Divo2, a hyper car with modified aerodynamics designed for significantly higher lateral acceleration. 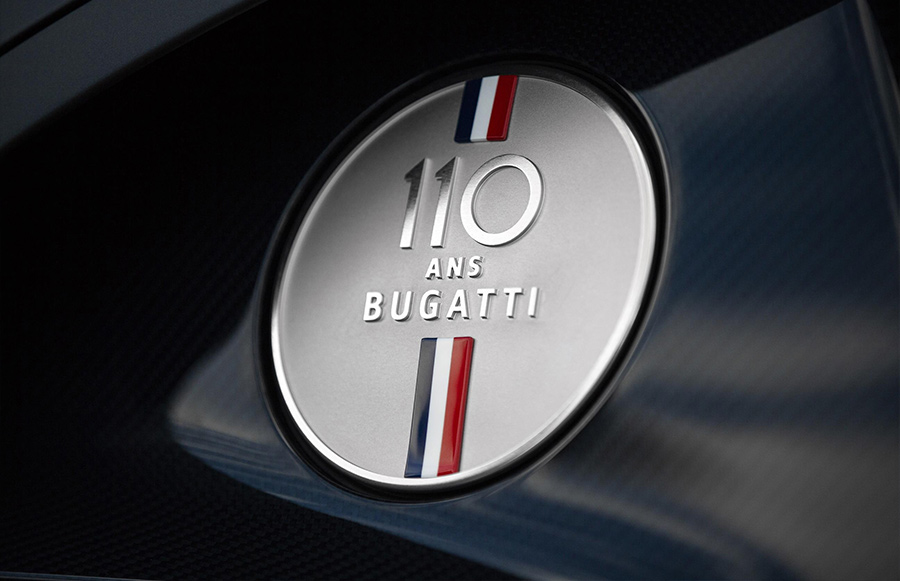 Both models feature a superlative powerplant: the 8.0-litre W16 engine with four turbochargers delivers 1,103 kW/1,500 PS and 1,600 Newton-meters of torque. The engine compartment cover of the “110 ans Bugatti” is resplendent in Steel Blue and Steel Blue Carbon. The inserts on the cylinder banks are made from aluminium with a clear anodized finish. The car can accelerate from 0 to 100 km/h in less than 2.4 seconds, reaching 200 km/h in 6.1 seconds and 300 km/h in 13.1 seconds. Even the magic figure of 400 km/h can be reached in only 32.6 seconds. The maximum speed is far higher, at 420 km/h. “The ultimate hyper sports car from France is still the most powerful, highest-quality, fastest and most comfortable gran turismo in existence – a blend of elegance, quality, unique character and power,” says Stephan Winkelmann. This is an industrial product of considerable artistic merit. 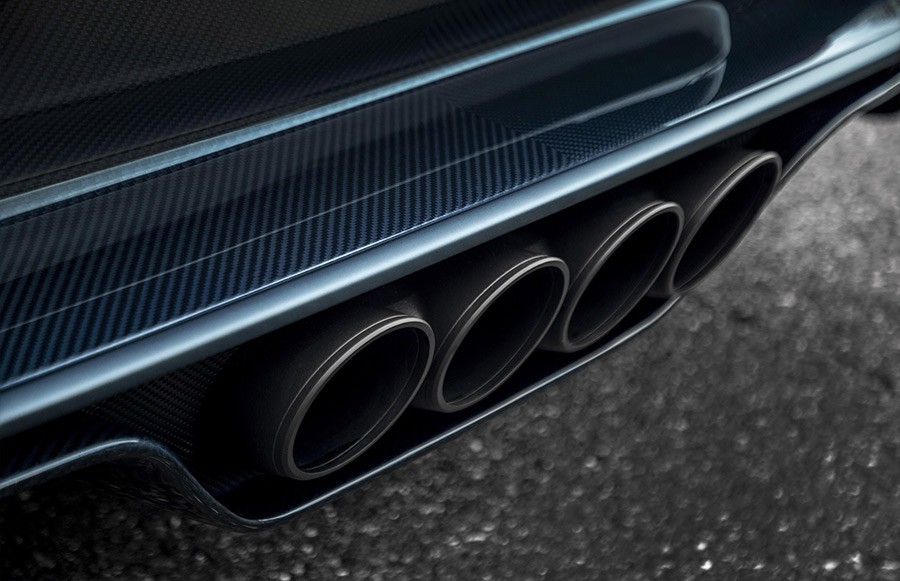 Form follows Performance. This applies especially to the new edition. The famed Bugatti line, the brand’s graphic DNA, also adorns this exclusive model. Behind the C line, set off by a contrasting colour, the extraordinary engine receives sufficient air for combustion and cooling. “The design element also establishes a link to the historic Type 57 SC Atlantic, which is now one of the world’s most valuable cars,” says Achim Anscheidt, Chief Designer of Bugatti Automobiles S.A.S. The special model celebrating the 110th anniversary of the brand’s existence in France keeps up this tradition.