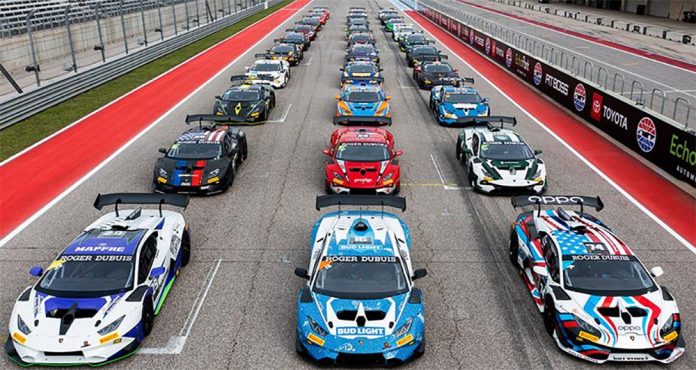 The North American leg of Lamborghini Super Trofeo launched on Independence Day weekend in 2013, with Lee Davis and Ryan Eversley teaming to win the maiden race at Lime Rock Park. The race count stands now at 98 ahead of the Saturday-Sunday doubleheader at the iconic road course in Elkhart Lake, Wisconsin.

As Senior Manager of Motorsports for Automobili Lamborghini America, Chris Ward has been there every step of the way, leading the effort to build the North American series from the ground up. It started nearly a decade ago, coaxing teams, drivers and Lamborghini dealers to become involved. From a 10-car field in that first race eight years ago, the series has grown to a record 30 entries at events this year.

“We’re massively proud of where the series is today, and it’s through the efforts of all the participants,” said Ward, who has not missed a single on-track session – practice, qualifying or race – since that 2013 inception.

“The teams, the drivers, the dealers and the product – those are the ingredients that make this championship what they are,” Ward added. “We would be nothing without the tremendous product that we race on the track. The people at Sant’Agata (Italy) headquarters have really put together with the current Huracán Super Trofeo Evo a remarkable race car.”

That car and its predecessors in the series – the Gallardo and the first-generation Huracán – have lured a who’s who of drivers to compete. Among the notables are past Formula 1 drivers Enrique Bernoldi and Nelson Piquet Jr., IndyCar pilots Bruno Junqueira and Conor Daly and motocross star Chad Reed – not to mention IMSA standouts Eversley, Trent Hindman, Andy Lally, Katherine Legge, Corey Lewis, Bryan Sellers and Madison Snow.

Lewis is the all-time leader in class wins with 25 and class championships with four. Richard Antinucci, who finished second in that inaugural race eight years ago, still competes and has 21 career wins. Antinucci currently leads the Pro class standings in search of his third season title.

As great as it’s been to this point, Ward said it’s only going to get better. The next-generation Huracán, the Evo2, will debut in 2022. Response has been overwhelming.

“We were anticipating selling maybe a dozen of those cars prior to the start of next season; that would be a huge achievement,” Ward said. “As I sit here today, we have 30-plus orders for those cars for next year.”

Turning an appropriate phrase for Lamborghini’s Italian home, Ward added, “Rome wasn’t built in a day and here we are – nine, nearly 10 years on – we’re finally at the point where regularly with 30 cars on the grid is a really good race series. The interest in the series and the (2022) car is at record levels, with even more new and exciting teams wanting to come and join us as well as a huge number of new customers. We are excited to see what the future brings.”

Twenty-six cars are entered for Road America, the fourth of six doubleheader rounds on the 2021 schedule. Among those to watch this weekend are:

There will one Lamborghini Super Trofeo practice each on Thursday and Friday ahead of qualifying at 5:15 p.m. ET Friday. Race 1 starts at 1:40 p.m. Saturday and Race 2 at 11:50 a.m. Sunday. Both races will stream live on IMSA.com/TV Live and TrackPass on NBC Sports Gold.