By: KTM | Photos Courtesy of: KTM 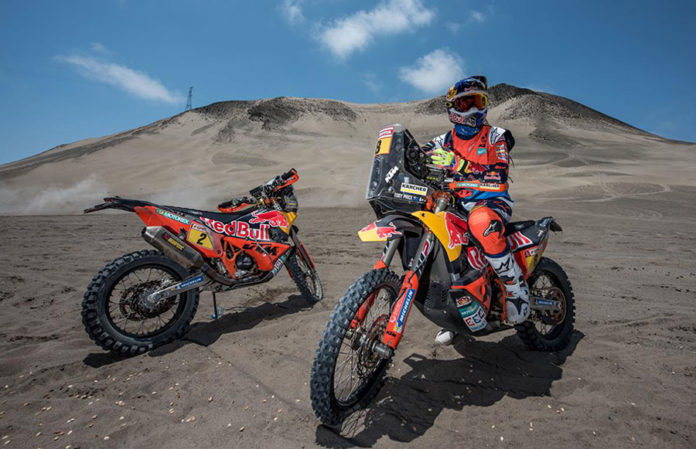 The 2018 Dakar sees the official debut of the new KTM 450 RALLY, following its launch at the EICMA motorcycle show in November 2017. The new bike has proven to be faster, more powerful and yet easier to ride hard than the old model. The bike and riders now face a gruelling 14-stage rally that starts in the dunes of Peru, travels over the mountains of Bolivia before finishing in the tough terrain of Argentina. With the event promising to be one of the most difficult ever, the KTM factory riders are fully prepared and ready to race the world’s toughest cross-country rally.

Reigning Dakar Rally champion Sam Sunderland will head off on Saturday with his bike displaying the number-one plate. The Brit is keen to equal his success of 2017, but is aware of the size of the task ahead of him.

Sam Sunderland: “I am really looking forward to getting started on Saturday. The 2017 season was good for me, I started off winning the Dakar and then fought for the World Championship right down to the final round in Morocco. I felt good on the bike all year, and the introduction of the new model gives some extra motivation to do well. Starting with the number one plate on my bike does add a little pressure, but I am honoured to have the opportunity to do so. The first five days of the rally are in the dunes of Peru and I really like that kind of terrain. Hopefully I’ll have a good race and if I can take things fast but steady during that first week I should be in a good position going into Bolivia and then onto the finish in Argentina.”

2016 Dakar winner, Toby Price has had a tough 2017 season plagued by the injury he sustained at the beginning of the year. The Australian knows he still has the speed and experience for a good result but is realistic about his chances after having such little bike-time.

Toby Price: “I am really excited for the Dakar 2018. It’s going to be difficult for me because I haven’t had much time on the bike throughout the whole of last year due to injury. Despite that, I’m feeling good now and really looking forward to the race. My plan is to take things steady, get to the finish of every stage and see where I am from there. Hopefully my experience will come through and I’ll soon start feeling more comfortable and be able to push on a little.”

Matthias Walkner comes into the Dakar after winning the final round of the FIM Cross-Country Rallies World Championship. The Austrian is keen to go one better than his runner-up position of 2017.

Matthias Walkner: “My preparation leading up to the event has been really good and I’m looking forward to getting things started here in Peru. My 2017 season finished on a high with the win in Morocco, that was encouraging as we used the new bike for the first time in competition. Training has been going well, but unfortunately, I have become a little ill after arriving in Peru. I have a couple of days to rest before the race starts, so that will help. The competition is going to be tough, there are a lot of good riders here. Obviously, my goal is the top step of the podium, and I think if I can ride consistently and not have too many bad days that is definitely possible.”

Antoine Meo returns to the Dakar after a stellar rookie performance in 2016. The ex-World Enduro Champion rode superbly on the new KTM 450 RALLY in Morocco on his return to competition and hopes to carry that pace into the 2018 Dakar.

Antoine Meo: “I’m so happy to be here in Peru, ready for the start of the Dakar. After missing the last two years due to injury, it feels great to have another chance to race this event. I am not quite 100% fitness-wise but I will do my best and see how things go. The sand here in Peru is really soft and with the first five stages being held in the dunes it will be a new experience for me. If I can get to the rest-day in a good position I will be able to attack more towards the end of the rally.”

‘Queen of the Desert’, Laia Sanz, has gelled exceptionally well with the new bike. The Spanish multiple world champion is keen to see how it performs on what looks to be one of the toughest routes of recent years.

Laia Sanz: “I am feeling good here in Peru, we have had our shakedown test and that went really well – the bike feels excellent in the sand. Technical checks start tomorrow and then on Saturday we get to race. I am really looking forward to the event and I think I am better prepared this year than ever before, physically and mentally. The new bike suits me well so I am keen on seeing what I can do and hopefully get a good result at the finish.”

Luciano Benavides makes his Dakar debut with the KTM team and will be looking for a good result whilst increasing his experience of cross-country rallying. The young Argentinian has a lot to learn but is keen on carrying the knowledge he has gained from racing in the 2017 season into the Dakar with the goal of claiming a strong finish.

The 2018 Dakar Rally starts on Saturday January 6 with the first of 14 stages. The rally spends five days in the sand dunes of Peru before heading through the mountains of Bolivia where the riders will race at altitudes of over 3,600 metres. The final days of the event see competitors battle not only the tough and technical terrain of Argentina, but its scorching temperatures as well. The finish in Cordoba will mark the end of close to 9,000 kilometres of one of the most difficult Dakars in history.

The customer can send his configuration to his dealer for a personalized quote.
Read more