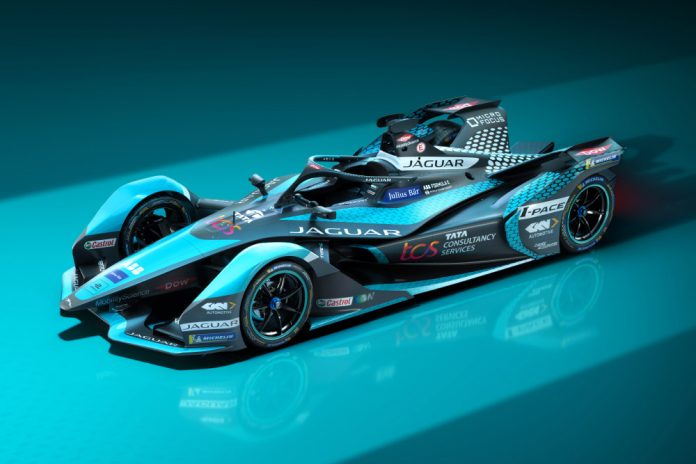 Jaguar Land Rover and TCS will build on an existing business relationship with the new Jaguar TCS Racing partnership. Translating its leadership in technology transformation and experience working with premier players in the automotive value chain, TCS has the ambition and belief to support Jaguar TCS Racing to become a global showcase for electrification.

The rebranding of the team includes a revised livery of the successful Jaguar I-TYPE 5 race car for the upcoming Formula E season. Additionally, Jaguar TCS Racing have been given additional prominence within Jaguar Land Rover’s recently launched motorsport division as part of the company’s Reimagine strategy. Jaguar TCS Racing’s goal is to ‘Reimagine Racing’ and use this highly relevant motorsport activity to test, learn, develop, collaborate, and share innovations including cutting-edge electric vehicle technologies across Jaguar Land Rover to benefit future road car development. Specifically, learnings and technology transfer from Formula E will help ‘Reimagine’ the Jaguar brand as an all-electric luxury brand from 2025, coinciding with the company’s commitment to the Gen3 era of Formula E.

As part of the reorganisation, James Barclay takes on the role of managing director, Jaguar Land Rover Motorsport Limited in addition to his role as team principal of Jaguar TCS Racing. Jaguar Land Rover Chief Executive Officer, Thierry Bolloré, becomes the chairman of the new organisation. All future opportunities and benefits for both Jaguar and Land Rover brands will be explored through this newly formed division.

Heading into the final Gen2 season after the team’s most successful Formula E campaign, which saw Jaguar Racing finish as runner-up in the Teams’ World Championship, the British based racing team boasts a highly competitive and efficient race car in the Jaguar I-TYPE 5, and one of the strongest driver pairings with Sam Bird and Mitch Evans returning to provide speed, consistency, and highly valuable Formula E experience.

With only 87 days until the start of the new season, the race team have focussed on refining the most successful race car in Jaguar TCS Racing’s Formula E history including revisions in several software areas to improve energy management, making the race car faster and more efficient. The team have also invested time in understanding and simulating the new qualifying system and practicing in-garage pitstops, which will become a significant feature of the first 10 minutes of the new format.

Building on the existing and highly valued team partnerships, Jaguar TCS Racing are also proud to welcome Uncommon as the team’s new official teamwear partner in a new deal. As part of the team’s Race to Innovate platform every item of teamwear for season 8 will be made using recycled materials.

James Barclay, Team Principal Jaguar TCS Racing: “Launch day is always exciting as we look forward to the possibilities of the upcoming season after months of hard-work behind the scenes. Welcoming a brand-new title partner – Tata Consultancy Services – is a real honour and we look forward to a highly innovative and successful partnership together. It’s an announcement we’ve been looking forward to revealing and is an exciting time to see a global leader like Tata Consultancy Services joining other blue-chip brands in FIA Formula E. After our most successful season to date we have been working hard to improve further on our performance with the aim to race for more points, wins and ultimately the world championship.

I’m also incredibly proud to be appointed as Managing Director, Jaguar Land Rover Motorsport and Team Principal, Jaguar TCS Racing Formula E Team as a result of the newly launched motorsport division. During the off-season we’ve introduced a new Motorsport Executive Committee dedicated to maximising the opportunities of our motorsport activity including technology transfer from race to road. It is very special to be an integral part of reimagining Jaguar’s all-electric future.”

Thierry Bolloré, CEO Jaguar Land Rover, Chairman JLR Motorsport: “I would like to extend my welcome to Tata Consultancy Services. This partnership is a perfect example of the synergies that exist within the Tata group. Motorsport is the ultimate challenge and to succeed in this highly competitive arena you must excel in all areas. Technology, innovation, agility, unity, and teamwork are all important learnings which we can implement across the company and wider group. I recognise these benefits and want to make sure that our future motorsport activity structure is set-up for maximum success.

“We could not Reimagine Jaguar without racing and beyond next season I am pleased to say that we are committed to the Gen3 era of Formula E. Jaguar TCS Racing will be a core platform for Jaguar on its journey to becoming an all-electric luxury brand from 2025. Good luck to all my teammates including Sam and Mitch on what promises to be another highly competitive and exciting season ahead.”

Rajesh Gopinathan, CEO & MD, TCS: “We are delighted to expand our partnership with Jaguar Land Rover and join forces as Jaguar TCS Racing to harness collective knowledge and to innovate for a sustainable future for all. As the world races towards electrification, this collaboration will pave the way for the adoption of advanced technologies, utilisation of cleaner energy, and the evolution of novel business models. Our efforts will go beyond business to make a lasting impact on people, communities, and the planet.”

Rajashree R, CMO, TCS: “This partnership between Jaguar Land Rover and TCS is the coming together of two purpose-driven brands to create a sustainable future, leveraging innovation and collective knowledge. It is rooted in a shared belief that technological innovation can architect a better world. Together we will innovate and build new technologies that will accelerate the adoption of connected, autonomous, electric transportation, driving sustainability and creating better futures for people everywhere. We are excited about the possibilities this partnership will herald to our joint ecosystem.”

Paul Preuveneers, CEO and Founder at Uncommon: “We’re excited to be partnering with the team at Jaguar TCS Racing. We look forward to working together over the coming months and years to find innovative, sustainable solutions for their official teamwear and fan merchandise collections.”

Mitch Evans, Jaguar TCS Racing driver #9: “As we enter season eight of the ABB FIA Formula E World Championship, I reflect how far we have come as a team since we joined the championship. During the previous five seasons we have shown consistent improvement and it was testament to the team that we could celebrate second in the championship last season. As we embark on a new era as Jaguar TCS Racing I am excited to take to the track and compete with our rivals this season aiming for the top step of the podium.”

Sam Bird, Jaguar TCS Racing driver #10: “Last season we enjoyed a lot of success together with a couple of wins and I learnt a lot about the team and about how to get the most out of the Jaguar I-TYPE 5. The performance of last season shows we have a great formula for success and with the consistency in drivers and race car, I am very much looking forward to competing against and beating our rivals on track and putting Jaguar TCS Racing in a winning position. The championship is fiercely competitive, but we are fully focused on consistently scoring points and challenging for wins. It will be another close season where every qualifying, race and point will count.”

Jaguar TCS Racing will race on the streets of Diriyah, Saudi Arabia on 28 and 29 January 2022 for the first of 16 races in 12 cities across the globe.