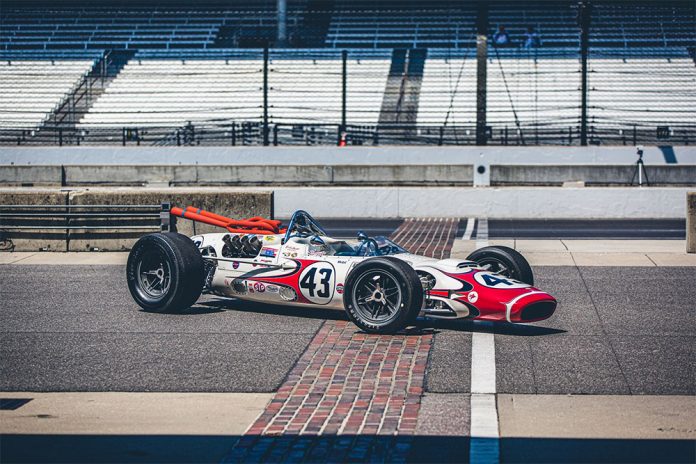 *“The car holds very happy memories for me…John Mecom was the owner of the car. I was leading the 500 by almost two laps with eight laps to go, when an oil scavenge pump, which fed the top end of the engine from the bottom reservoir suffered a malfunction and I had to shut the engine off and walk back to the pits. Graham Hill won the race in another Lola entered by John Mecom and Jim Clark was second. I finished sixth. I did win the Rookie of the Year Award as it was my first year at Indy.

With regards to Mount Fuji, I led that race almost from the beginning. Jim Clark and Chris Amon were there also, along with the usual Indy racers, so I was very happy to win what was my first race in Japan. The race ran in the opposite direction of what we have today. I still have the trophy from that race.” * – Sir Jackie Stewart, OBE

The 1966 edition of the Indianapolis 500 was a dramatic and controversial affair played out by the world’s most talented drivers in the sport’s greatest race. This incredible Lola T-90 was a large part of the story, and it stands as a historic and important machine from an incredible era in motor sports history.

By 1961, Jackie Stewart had transitioned from a champion skeet shooter – nearly representing Scotland in the 1960 Olympics – to a devilishly quick racing driver. After winning the 1963 Formula 3 championship in a Tyrell, a trial run in a Lotus 33 sufficiently impressed Colin Chapman and Jim Clark, and Stewart was placed in a Lotus Formula 2 car for 1964. 1965 brought his first full season in F1 with BRM, his first championship victory at Monza, and third in the World Drivers’ Championship. Stewart then won the 1966 Tasman Series in a BRM, but struggled in the BRM H16 F1 car, which lacked reliability.

Following a trend for the world’s top drivers to compete for arguably the biggest prize in racing, the Indianapolis 500, Stewart and his BRM teammate Graham Hill signed with Texas oilman John Mecom’s eponymous team to race in two of its three Lola T-90s; the third car being driven by Rodger Ward. This would be just Lola’s second year at Indianapolis, where the manufacturer hoped to parlay its successes in sports car racing on the sport’s biggest stage.

Driving the Ford-powered, Bowes Seal Fast-sponsored Lola T-90 offered here, chassis 90/2, Stewart led the team in qualifying, placing his car 11th on the grid with a four-lap average of 159.972 mph. The race was marred by a first-lap accident that eliminated 11 of the 33 entrants. After a 90-minute red-flag period, the race restarted, and on lap 152 Stewart took a comfortable lead when Lloyd Ruby’s Eagle was black-flagged for leaking oil. Cruel fate then intervened and with just eight laps to go, Stewart pulled off the track with no oil pressure due to a damaged scavenge pump. Hill inherited the lead and would go on to win the Indy 500 in his first try, with Stewart placing 6th, though confusion with timing and scoring of the race kept the results in question for some time. In spite of Hill’s victory, Stewart was named the 1966 Rookie of the Year, a testament to the quality of his performance.

Al Unser Sr. would then drive 90/2, now painted in American Red Ball sponsorship, in USAC events throughout the remainder of 1966. These efforts were highlighted by three 2nd Place finishes and 3rd in the Langhorne 150.

Jackie Stewart raced 90/2 for John Mecom once again in October 1966 at the Fuji International Speedway, where he would drive to victory in the Fuji 200 over Bobby Unser’s Gurney Eagle. This fascinating event brought the best USAC drivers and cars to Japan and pitted them on a modified road course inside Fuji’s oval. A fascinating article on the race was published in Road & Track magazine and is included in the sale.

According to extensive research done by the consignor, circa 1967, this Lola left Mecom Racing, and by 1970, was acquired by Red LeGrand, who sold the car to Phil Henny circa 1973. Henny stripped the paint on the car’s tub and found that it had the American Red Ball livery underneath, causing speculation that the car may be Graham Hill’s Indy winner from 1966. Without a clear understanding of which of the two Ford-powered Lolas he had, Henny wrote to every source of information that he could think of, and the car’s file contains fascinating letters sent to and responses from John Mecom, Jackie Stewart, Indianapolis Motor Speedway, and Lola Cars. Henny would eventually become convinced that he possessed the Graham Hill winner and cosmetically restored the car to carry the corresponding no. 24 livery, though it was just a rolling chassis and not fitted with an engine. Henny sold the Lola through Leo Gephart to noted collector David Uihlein circa 1983. In 1994, Mr. Uihlein had Paul Freehill install a proper four-cam Ford engine, but it was not made to run. The following year, 90/2 was sold to the consignor as the Graham Hill Indy 500 winner.

Passionate about having a clear understanding of all of his significant racing machines, the consignor set out to trace the history of the Lola from new, and further document its Indy-winning provenance. As demonstrated by the extensive correspondence on file, the deeper he dug, the clearer it became that this was actually the Jackie Stewart Lola that placed 6th at Indy and won the Fuji 200. Numerous photos sourced from the Indianapolis Speedway Museum and firsthand accounts from people such as John Mecom and Jim Dilamarter helped his project. In 2017, the consignor was convinced that his research had gone as far as it could and he contacted Walter Goodwin, arguably the finest Indy car restorer in the country, and hired him to not only change the car’s livery to the proper no. 43 Bowes Seal Fast Special, but also restore the mechanicals and make it run for the first time in over four decades.

The results are what we see today, and 90/2 has clearly benefited from the loving attention received in its current, 26-year stewardship. In addition to its comprehensive file, the Lola is accompanied by period fiberglass bodywork that was replaced by Goodwin during restoration, and still carrying the no. 24 applied by Phil Henny.

This amazing machine stands as one of only three Lola T-90s built, and only two that were powered by the legendary four-cam Ford V-8, the other of which won the Indy 500. It is one of just two cars that legendary three-time F1 World Champion Sir Jackie Stewart ever raced at Indianapolis, and the only Indy car in which he won a race, at Fuji in 1966. Easy to miss is that four-time Indy 500 winner Al Unser Sr. raced this car to three 2nd Place finishes on his way to 5th in the 1966 USAC championship.

Accompanied by a file tracing its history from new, a start cart with starter and batteries, and two sets of fiberglass bodywork, this remarkable artifact of 1960s motor racing is now ready for its first new owner in over 26 years, and the multitude of events for which it is eminently eligible.

*Please note that this vehicle is sold on a Bill of Sale.