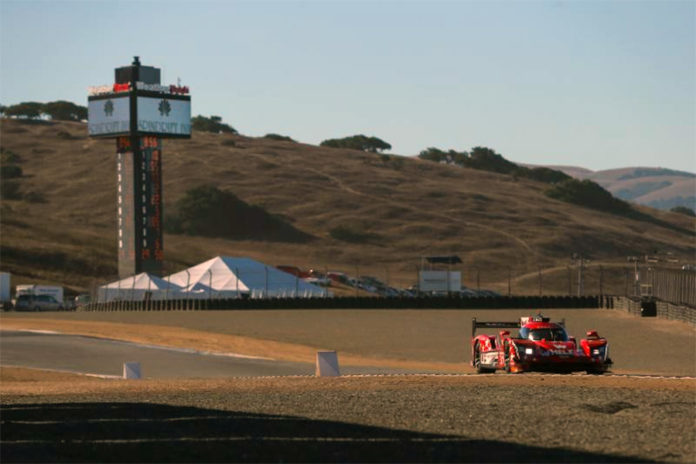 If you’re a fan of IMSA racing, this weekend’s Rolex Monterey Motorsports Reunion at WeatherTech Raceway Laguna Seca in Monterey, California is a once-in-a-lifetime opportunity.

As a centerpiece of this year’s season-long 50th Anniversary of IMSA celebration, IMSA race cars from every era will be on display – and on the racetrack – throughout the popular weekend event. Normally, one manufacturer is selected as the “featured marque” for the Rolex Monterey Motorsports Reunion. This year, that “featured marque” is IMSA.

“The Rolex Monterey Motorsports Reunion is one of the world’s most prestigious annual historic racing events, and it is our honor for IMSA to be the ‘featured marque’ this year,” said IMSA President Scott Atherton. “There is stiff competition among owners for their historic race cars to be selected to participate in the reunion, which means we will see a collection of world-class IMSA race cars that are rarely seen – let alone run in anger on the racetrack.

“This event brings to life our IMSA 50th Anniversary Celebration in a unique and meaningful way, with cars and drivers from the historic IMSA GTP era, the American Le Mans Series LMP1 era, GRAND-AM Daytona Prototype era and GT cars from every era. Whether you’ve been an IMSA fan since the 1970s or you’ve joined us more recently, there will be something for fans of every generation to enjoy.”

More than 100 IMSA race cars from throughout its 50 years will conjure up fond memories for race fans and competitors alike. A small sampling prototype cars in attendance will include a Toyota Eagle GTP car from Dan Gurney’s All American Racers, the Nissan NTP90 GTP, Bob Akin’s Coca-Cola Porsche 962, a Comptech Acura Spice GTP Lights car; some “newer” prototypes like an Audi R8 LMP1 and a Chip Ganassi Racing Lexus-Riley Daytona Prototype; all the way to present-day IMSA WeatherTech SportsCar Championship Daytona Prototype international (DPi) cars like the No. 31 Whelen Engineering Cadillac DPi-V.R and a current Acura ARX-05.

Some of these race cars will be on display at the massive IMSA Pavilion in the paddock, which in many ways will bring to life the book “IMSA: Celebrating 50 Years” that was unveiled at the 2018 Rolex Monterey Motorsports Reunion. The IMSA Pavilion will host manufacturer presentations, autograph sessions and photo opportunities with a replica of the Bishop-France Trophy.

Among 14 different run groups covering everything from pre-1940s race cars to Formula 1 cars to modern-day prototypes, three will include substantial IMSA race cars. Group 5A will include IMSA GT cars from 1973-81; Group 7A includes IMSA prototypes including GTP, WSC, LMP and Daytona Prototypes; and Group 6B includes IMSA GTO/GTU machines from 1981-91.

“We worked diligently to select the most iconic IMSA race cars we could find to participate in the reunion,” said IMSA Senior Director, Racing Operations Mark Raffauf, who has been part of the IMSA organization throughout most of its history. “Seeing these cars return to the racetrack will bring back so many memories of great events, fantastic battles, and in some cases, utter dominance that have shaped our sport over the past five decades. The cars have long been the stars in IMSA, and that will be the case again this weekend.”

Tickets for the Rolex Monterey Motorsports Reunion are available now at WeatherTechRaceway.com.