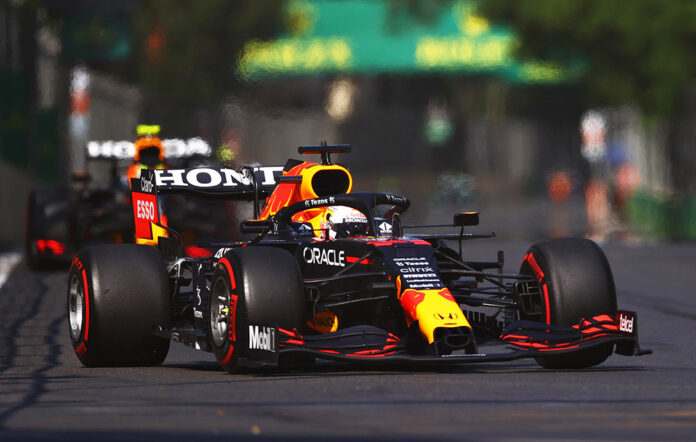 On a sunny Azerbaijan Sunday that had more peaks and valleys than the world’s most daunting rollercoaster, Sergio Perez was in the lead car when the ride stopped, scoring his first win of the season in the Red Bull Racing Honda.

Perez was joined on the podium by fellow Honda pilot Pierre Gasly, who outdueled Charles Leclerc on a last lap where the two drivers swapped the third spot twice on the tight Baku street circuit. Gasly’s third-place run was his best finish of the season as was a strong seventh-place run put up by AlphaTauri rookie Yuki Tsunoda.

The first 45 laps were a tour de force for Honda as all four Honda-powered cars were entrenched in the top eight, led by Max Verstappen, who had the field covered after taking the lead after a quick Lap 13 pit stop. Undaunted when his six-second lead was erased on Lap 31 due to a Lance Stroll crash, he quickly put five seconds between himself, Perez and Hamilton while setting the fastest laps of the race.

But as the engravers were affixing Verstappen’s name to the trophy, the rollercoaster took a dive. A flat left-rear tire at one of the fastest sectors of the track pitched Verstappen into the wall with three laps to run, ending his day and setting the stage for a two-lap shootout.

The race was red-flagged as marshals cleaned the track while Race Control allowed teams to change tires, due to the uncertainty around the tire issues that appeared in both of the day’s previous accidents. The race resumed from a standing start, with Perez holding the advantage over Hamilton with Vettel and Gasly in the second row. Hamilton got a strong start and was challenging Perez heading into the first turn, but he was unable to slow in time for the corner and sailed off track, allowing Perez to run unchallenged to the win.

Perez vaulted into third in the championship with the win, while Verstappen maintained his lead in the driver standings. The win also saw Red Bull Racing Honda’s lead in the constructors championship swell to 26 points after six races. Gasly’s podium moved him to eighth in the standings while Tsunoda moved up to 14th with his effort. The teams will have next week off before heading to the Paul Ricard circuit for the June 20 French Grand Prix.

Toyoharu Tanabe
Technical Director, Honda F1
“As usual, the Baku circuit produced a chaotic race, but in the end Sergio Perez who had run a strong second for most of the afternoon was able to claim his second ever F1 win and his first with Red Bull Racing and Honda, after defending his lead at the restart following the red flag. Really, the win should have gone to Max Verstappen who dominated the race until a crash, for which he was entirely blameless, put him out of the race. Pierre Gasly also had a good afternoon, finishing third for Scuderia AlphaTauri Honda and for us to have two drivers on the podium, one from each team, is really fantastic. Yuki Tsunoda did well to come home seventh and score points so that the team has moved up to fifth in the Constructors’ classification. Today’s performance and having four cars in Q3 was a great job from all four drivers and both teams. Now we have a short break in which to prepare for what will be a tough triple header, which starts with the French Grand Prix. We will be working hard to try and keep winning.”

Max Verstappen – Red Bull Racing Honda
Start 3rd, Finish: DNF
To retire from the lead of the race so close to the finish is pretty frustrating. I didn’t feel anything strange with the car and then suddenly the left rear went and I was in the wall quite hard. It’s not a nice place to crash and we don’t know the exact cause yet. Up until that point it was a great day, the car felt perfect and I was comfortable in the lead so it felt like it would be an easy 1-2 but there are no guarantees in this sport. Of course I am frustrated from my side not to win but I was very happy to see Checo up there. If I couldn’t win, I’m glad he could. He’s a great guy and a great teammate so it was good to see him smiling on the podium and having his first win for Red Bull. It’s a shame that we missed out on the opportunity to make the gap bigger to Lewis today in the championship but it’s still a good result for the Team!”

Sergio Perez – Red Bull Racing Honda
Start: 6th, Finish: 1st (First win of season)
We love Baku! It feels amazing to get my first win with Red Bull. I feel very sorry for Max because he deserved the win and a 1-2 for the Team would’ve been very enjoyable. We were basically flat out from the very first lap and I had Lewis behind pushing me so I couldn’t breathe, it was very challenging but we kept our focus. Everything worked perfectly today apart from the restart at the end where I just had no grip. I thought I cannot lose this race two laps from the flag so I broke as late as I could into Turn 1 and then I saw Lewis locking up and go straight on into the runoff. We have to enjoy today, our pace was great and we have a very good race car. We are working flat out and giving our best every week, it’s only race six and there’s more to come from me, the relationship with Max and the Team is great and there’s still a long way to go in this championship.

Pierre Gasly – Scuderia AlphaTauri Honda
Start: 4th, Finish: 3rd (First podium of season)
“What an incredible weekend, topping FP3, then P4 in Qualifying and now a podium today – I’m so happy for the guys, it was a great result! What a way to do it as well, the last two laps were so intense with Charles and I really had to fight hard to get that podium. After the restart I thought that Charles would pass me on the straight, but I saw the podium ahead of me and I tried everything, I just wanted it so badly. The car was incredible all weekend, and it’s just a fantastic result for the whole team. I’m really pleased to reward them with a podium. Moving ahead to France, It’s my home race so I really want to do well but now it’s time to celebrate.”

Yuki Tsunoda – Scuderia AlphaTauri Honda
Start: 7th, Finish: 7th (Best starting and finishing result of 2021 season)
“I’m a bit frustrated by the final result today, as I think the pace in the car has been strong this weekend. Unfortunately, I dropped two positions during the last laps, I’m not sure I could have done anything differently but I’ll analyze everything tonight so I can understand this better moving forward. P7 still means important points for the team though. I want to congratulate to Pierre for the podium today, the team really deserves it and it’s a great result.”

The Bugatti EB 110 Sport Competizione – Back on the Racetrac...

Special Presentation of Seven Silver Arrows at the Mercedes-Benz Museum