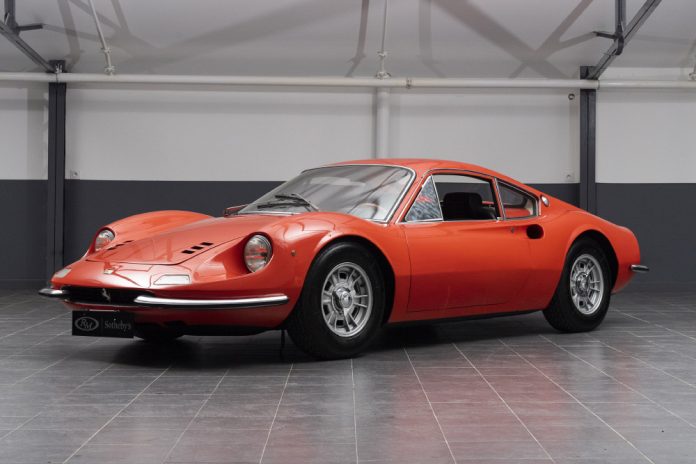 The 44th Dino 206 GT to be completed out of just 152 examples built, chassis number 00186 was first registered on 22 October 1968 and delivered to MG Crepaldi Automobili S.a.S of Milan, Italy, finished in Rosso Dino (20-R-350) over a Blue (135) interior. Sold new to local Milan owner Giulio Brandinali, this lovely Dino was first registered on the license plate “MI G16281”. Less than a year later, in September of 1969, the Dino was sold to Franco Comi of Bergamo and re-registered as “BG 210283”. Returning to Milan in March of 1970, the Dino was purchased by Caterina Longoni and registered “MI K598770”.

Two years later the car was purchased by Nedo Rossi of Ispra, a Province of Varese, who registered it on plates “VA 349235”. Later in 1972 the car was sold to Mario Mascheroni of Como, Italy. On 27 April 1973, the Dino was acquired by Rosalia Benedetto and re-registered in Trapani as TP 124384; the car would go on to wear that registration number until 2015.

Following Ms. Benedetto, its next owner was Giuseppe Amadeo, who purchased the car in March 1974. The car was then sold to Salvatore D’Angelo in March of 1976. D’Angelo would go on to keep the Dino for the following 37 years. The Dino was then acquired by Mr. Guikas through RM Sotheby’s in 2015.

Undoubtedly the most desirable of all Dino models, 206 GTs are highly sought-after for their rarity and unique features. Having spent the majority of its life in Italy and boasting a known ownership from new, chassis 00186 is an excellent example of its kind. Recently inspected by Ferrari Classiche, a report is on file should the next owner wish to complete its certification. In addition to its matching-numbers engine and gearbox, it is offered with the rare and valuable printed Dino 206 GT user and maintenance manual compiled by Ferrari.