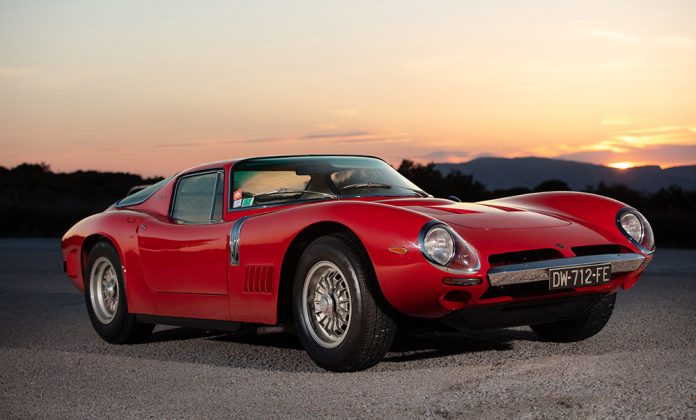 Giotto Bizzarrini was a former Ferrari executive and freelance designer. In addition, Bizzarrini worked with Lamborghini, designing their legendary V-12 engine, and for Iso, where he developed motorbikes and automobiles. Among his first projects was to design the Grifo, based on a shortened Iso Rivolta chassis, retaining the original car’s running gear. Bizzarrini saw potential in the Grifo and obtained permission from Iso chairman, Renzo Rivolta, to manufacture a high-performance version under his own name. This was suitably named the Bizzarrini 5300 GT Strada, and was available to the public from 1964.

The Bizzarrini 5300 GT Strada was equipped with independent front suspension, a rear axle by de Dion, four-wheel Dunlop disc brakes, and a limited-slip differential. Early examples were powered by a 5.4-litre Chevrolet small block V-8, fed fuel by three Weber carburettors, with later versions being equipped with the 7.0-litre example and a Holley carburettor. The Strada produced 365 horsepower and 284 ft lb of torque, and was capable of reaching 62 mph in less than seven seconds, with a top speed of 174 mph.

This Strada was first registered in Maryland, USA, on 8 May 1968 to James Peters, who paid $35,000 for the car, a price more than double what a standard GT Ferrari cost at the time! In April 1990, chassis number IA30309 was purchased by Hervé Ogliastro who sent the car to Salvatore Diomante—formerly in charge of running the Bizzarrini factory—for a full restoration. In 1997, the Bizzarrini had completed its extensive restoration and was displayed at the Bagatelle concours d’élegance. Ogliastro would remain the owner of chassis number IA30309 for 27 years, selling it in 2017, when it was acquired by its incumbent owner.

On two occasions, Bizzarrini specialist Jack Koobs de Hartog has inspected this car; his March 2017 report confirms its identity, stating, “after a 3 hours’ inspection I am convinced that, without doubt, IA3*0309 is the correct chassis number of this car”. Copies of these reports, as well as copies of service invoices dated 1991 to 2004, accompany the car’s history file.