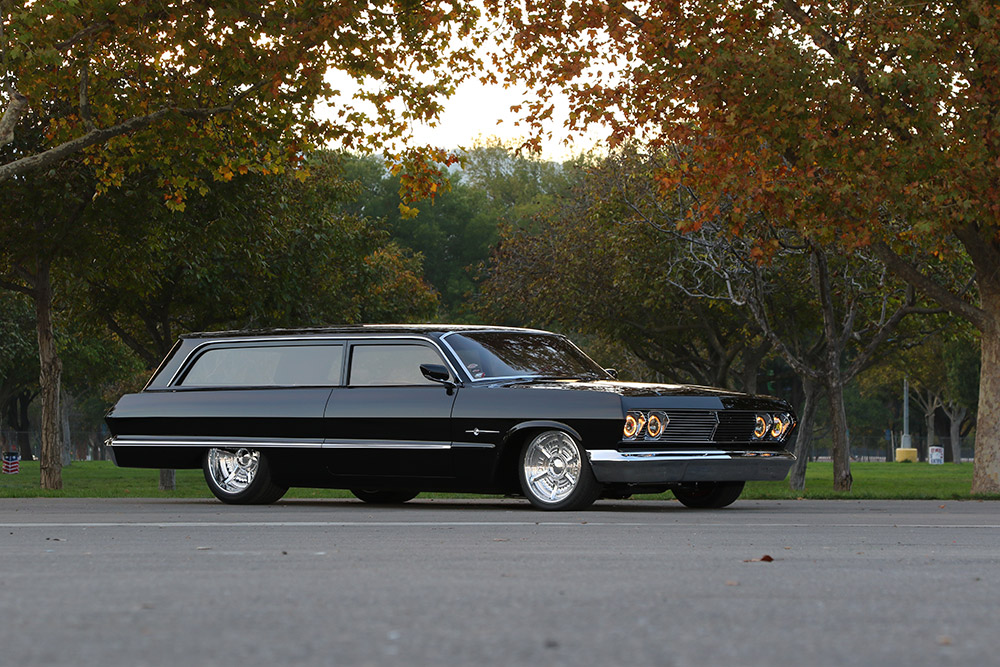 Goodguys, America’s favorite car show, announced the winner of its prestigious and long-running Snap-on Custom of the Year award – a 1963 Impala Wagon called “Impressive.” The two-door Chevrolet wagon, built by the Ranweiler family at its Minnesota-based shop Show Cars Automotive, was announced as the winner on Sunday during the awards ceremony of the 31st Autumn Get-Together. The title adds to an already long list of accolades for the wagon which debuted in 2020 where it won the Ridler Award at the Detroit Autorama and later the SEMA Battle of the Builders competition.

The result of a nine-year build process, the body is channeled over a custom Art Morrison chassis that provides updated suspension and a lowered stance. Under the hood is a 409-based block boasting 509 cubic inches topped with a customized Hilborn injection system and surrounded by over 100 one-off pieces. A 4L60E transmission backs up the 600 horsepower powerplant along with a Ford nine-inch rear end. Power is delivered to the ground with a set of custom-carved EVOD 18×8-inch front and 20×12-inch rear wheels.

The custom work goes well beyond turning a four-door wagon into a two-door, something Chevrolet didn’t offer in 1963. The top is chopped, the windshield is laid back and the B- and C-pillars and rear tailgate are custom built. Impala quarter panels and doors were also used in the two-door conversion process. The front of the Chevy is all custom, with an integrated front clip where the fenders, header panel, core support and inner fenders are all welded to the cowl for a seamless appearance. A reverse-opening pancaked hood, one-off grille and modified bumpers round out the exterior.

Chevy fans will note the use of a 1960 Impala dash inside, filled with Dakota Digital gauges and custom billet trim while a Vintage Air climate control system keeps the big space cool. M&M Hot Rod Interiors stitched the custom-dyed Italian leather over a set of 1959 Cadillac Eldorado seats and followed suit through the rest of the interior. The pedals, handles, accessories and trim pieces were designed and machined by the Ranweilers.

The Goodguys 2021 season concludes November 19-21 with the 24th Speedway Motors Southwest Nationals Presented by Barrett-Jackson in Scottsdale, Ariz. Attendees will have the chance to see “Impressive” in-person at the event as part of the Goodguys Top 12 Cars & Trucks of the Year display.

The Goodguys 2022 schedule will feature 17 events across the U.S. with an updated national event vehicle year eligibility cutoff. The new cutoff moves from the current 1987-and-older eligibility to a rolling 25-year eligibility, thus allowing owners of newer classic and custom cars to share their passion for the ever-evolving car culture landscape.