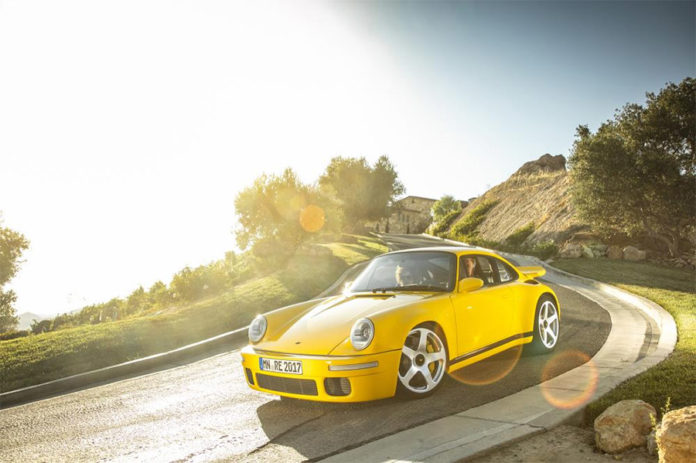 The Concours of Elegance is a display of only the rarest and most astonishing cars ever created. But the event always poses the question: “What are the Concours cars of tomorrow?”. The Future Classics class looks to provide the answer with a gathering of the latest, most exclusive limited-edition luxury and performance cars; the models that will one day become the most sought-after additions to a car collection.

The RUF CTR is perhaps the perfect example; steeped in heritage, hand crafted, exceedingly fast and incredibly rare. This 700bhp model is built on a totally bespoke aluminium platform, clothed in lightweight carbon fibre body panels. With a weight of just over 1100kg, it’s the successor to the legendary RUF CTR ‘Yellowbird’; a Porsche 911-based model that has hypnotised motoring enthusiasts with its famous filmed ‘Faszination’ lap of the Nürburgring. On its release, the ‘Yellowbird’ was the fastest car in the world, but the new CTR is faster still, with a top speed of 224mph. ‘Yellowbird’ itself will also be on display at Hampton Court Palace as part of the Main Concours line-up.

Joining the RUF is a limited edition Bentley model, built in 2019 to celebrate the brand’s Centenary. The Mulsanne ‘W.O. Edition’ pays homage to Bentley’s founder, inspired by his very own 8 Litre, and even including a part of that car’s original crankshaft, proudly displayed between the two rear seats. The crankshaft is set within a veneered surface, with a handcrafted vision of W.O Bentley’s 8 Litre, completed in an art deco style during a painstaking process of more than 8 days. Elsewhere, the Centenary Mulsanne is marked out by its use of heritage hides of leather, W.O. Bentley signatures throughout and a number of 8 Litre-inspired styling touches.

The Bentley is joined by another British rarity; the Aston Martin Vulcan. This track-only two-seater was limited to just 24 units globally, powered by a 7.0-litre V12 engine producing 820bhp in its most powerful tune. Using Formula One-style pushrod suspension, adjustable dampers, adjustable anti-roll bars and variable traction control, this lightweight Aston Martin is the ultimate trackday car.  And from trackday car to out-and-out racing car, the Ginetta G60-LT-P1 will also be in the Future Classics line-up, featuring a full carbon fibre monocoque chassis and body, seven-speed racing gearbox by XTrac and a 3.4-litre turbocharged engine.

Almost at the other end of the automotive scale is the Rolls-Royce Phantom Drophead Coupé. Beautifully handcrafted, this particular example was the last ever Drophead Coupé off the line at the Rolls-Royce facility in Goodwood, constructed with a painstaking attention-to-detail over more than 800 hours.

Andrew Evans, Concours of Elegance Director, said: “There’s no doubt that the Concours of Elegance celebrates motoring heritage; after all, it’s often the stories behind some of these rare cars that makes them so special. But the stories being written in the modern automotive world deserve to be told, too, which is why we wanted to showcase this range of ‘Future Classics’. Each is a celebration of bespoke craftsmanship, performance and luxury; they’re the automotive rarities that you’d be astonished to see on a concours lawn 50 years from now.”

‘Future Classics’ is just one of four superlative features at this year’s Concours of Elegance, which also includes a world-first Aston Martin Zagato display, featuring one of every model produced by one of motoring’s most legendary partnerships. Visitors will also be able to see a 70th anniversary display of five Ferrari 166MM models, including the 1949 Le Mans and Mille Miglia-winning car, which is informally known as the most significant Ferrari in the world.

The Concours of Elegance is built around its main display of around 60 of the rarest cars ever created, from 1904 right up to 2019. This once-in-a-lifetime collection of vehicles this year includes the Ballot 3/8 LC that won the very first Italian Grand Prix, and the 2018 McLaren P1 GTR ‘Beco’, featuring an Ayrton Senna-inspired livery and even a steering wheel made from the same material as Senna’s MP4/4 Formula One car.

Adult tickets for this year’s Concours of Elegance start from £40, with children under five and carers entering free of charge. For the first time, visitors can also book into an on-site ‘Tom’s Kitchen’ restaurant by celebrated chef, Tom Aikens for a full three-course lunch. Alternatively, Tom’s Kitchen provides less formal deli grab and go options or a three-course picnic.