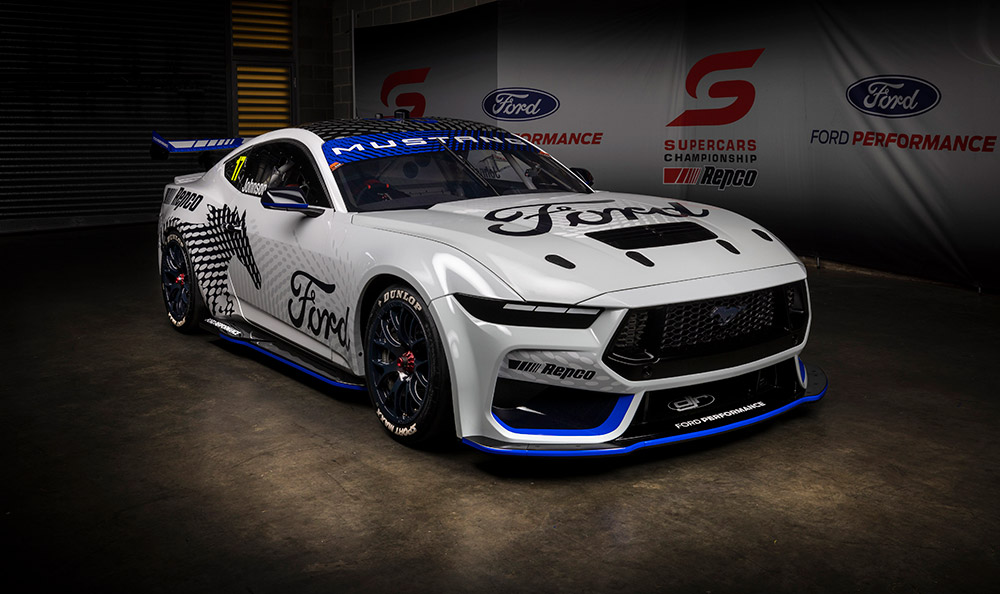 Ford has today revealed the first race-prepared seventh-generation Mustang, with the 2023 Mustang GT ‘Gen3’ Supercar uncovered at Mount Panorama ahead of the famous Bathurst 1000.

Ford’s challenger for the 2023 Australian Supercars Championship was shown in pit lane this afternoon, in a global first appearance of the seventh-generation Mustang in racing guise.

The road-going variants of the seventh-generation Mustang were revealed in Detroit last month, with computer-generated images of the race cars shown at the same time.

“It is fantastic to be able to show, for the very first time globally, the seventh-generation Mustang in racing form,” said Mark Rushbrook, Global Director, Ford Performance Motorsports.

“The reveal of the Mustang Supercar is the first of many, with Mustang to race in GT3, GT4, NASCAR and NHRA competition globally.

“Mustang has been an iconic brand on and off the track for 58 years and its legend will continue around the world. We always say Mustang was born to race, and that is more true today than ever. The Mustang GT Supercar is ready to race in 2023.”

The Mustang Supercar has been built by Ford’s homologation team Dick Johnson Racing, in conjunction with Ford Performance, in preparation for the 2023 season when a new era of Supercars racing begins.

Johnson, the Ford legend whose namesake team is celebrating the incredible milestone of 1000 races this weekend, will drive the car for the first time this afternoon.

“We’re very proud to be showing the world our new Mustang Supercar, and what better place to do it than at the Great Race here at Mount Panorama,” said Andrew Birkic, president and CEO, Ford Australia and New Zealand.

“It’s a special moment to be able to uncover this car in front of passionate Ford fans, alongside all of our Supercars drivers. It’s very fitting that Dick will take the car for its first laps this afternoon. He’s a legend of the sport, and an incredible ambassador for Ford.

“This car looks sensational, it’s loud, it’s fast and we can’t wait to see it hit the track,” said Birkic.

The Bathurst 1000 kicks off today for practice, before qualifying on Friday. The 1000km race is on Sunday, October 9.

The seventh-generation Ford Mustang will hit Australian roads in late 2023.