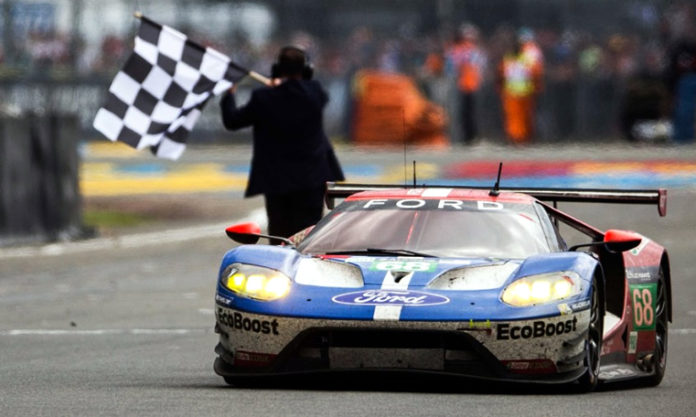 The ACO (Automobile Club de l’Ouest) today announced that the full squad of four Ford GTs will compete at the 2017 Le Mans 24 Hours, one year on from the marque’s triumphant return to the endurance race that everyone wants to win.

“When we came to Le Mans last year there was a lot of pressure on the team to deliver a win to commemorate the Ford GT40 1-2-3 finish in 1966,” said Raj Nair, executive vice president of Global Product Development and chief technical officer, Ford Motor Company. “It was fantastic to win but we will not rest on our laurels. We return to Le Mans in June with another year of experience racing the Ford GT behind us, seven wins including the 2016 Le Mans 24 Hours and the 2017 Rolex 24 at Daytona, and we can’t wait to compete again at this incredible event.” 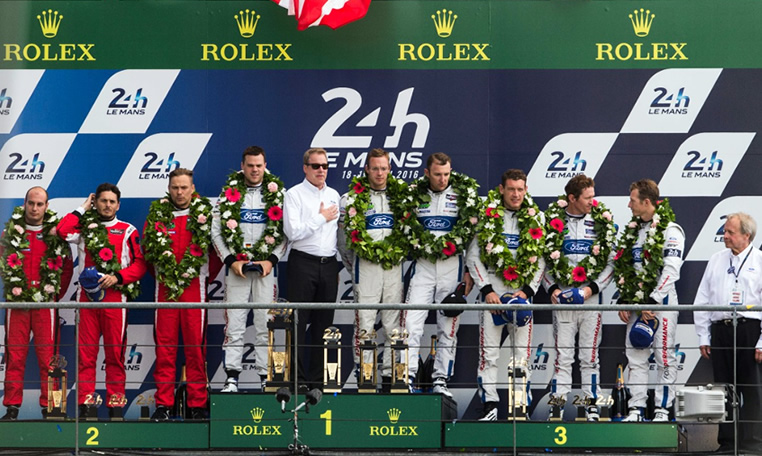 New to the team for 2017 is young Brazilian, Luis Felipe “Pipo” Derani, who will join Andy Priaulx (GB) and Harry Tincknell (GB) in the #67 Ford GT for the FIA World Endurance Championship races at Silverstone, Spa and Le Mans. The 23 year-old came to Ford’s attention in 2016 when he won the Rolex 24 At Daytona and the Sebring 12 Hours on his debut, marking himself as one to watch. 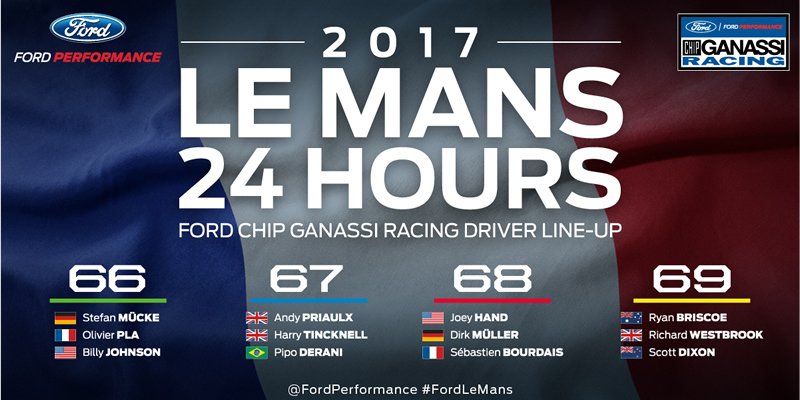 The winners of last weekend’s Rolex 24 At Daytona, Joey Hand (US), Dirk Müller (GER) and Sébastien Bourdais (FRA) will defend their historic 2016 Le Mans victory in the #68 Ford GT. The sublime squad proved with their two 24-hour victories that they are very hard to beat.

The #66 Ford GT will keep the regular rapid line up of Stefan Mücke (GER) and Olivier Pla (FRA) in the FIA WEC, and they will again be joined by Billy Johnson (US) for the Silverstone, Spa and Le Mans races.

In the #69 Ford GT the top squad of Ryan Briscoe (AUS), Richard Westbrook (GB) and Scott Dixon (NZ) will be looking to improve on their third place Le Mans podium finish of 2016.

“We are really looking forward to getting back to Le Mans with the Ford GT this year,” said Chip Ganassi, Ford Chip Ganassi Racing team owner. “Although we came home with the win last year, I think we also learned a great deal about that race, the Ford GT and what it takes to compete for the win. I feel like we will be even better prepared this time around. In addition, we will also once again take four cars and 12 of the best racing drivers in the world so I can’t wait to get back there and defend our title.” 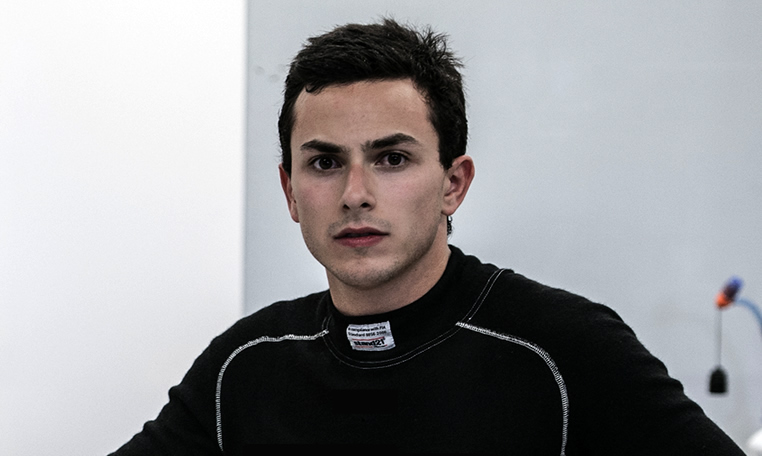 “I am delighted and proud to have been chosen to represent such a successful and respected manufacturer like Ford. To compete for a team like Ford Chip Ganassi Racing has been one of my aims since starting in racing and to be recognised and selected by them is a big deal for me. I especially want to thank George-Howard Chappell for his trust and belief in order to give me this opportunity.

“The way that the Ford GT has performed in endurance racing over the last 12 months has been exceptional and I am very much looking forward to working with the team to try and bring more success in the FIA World Endurance Championship and to defend the Le Mans LM GTE Pro title.” 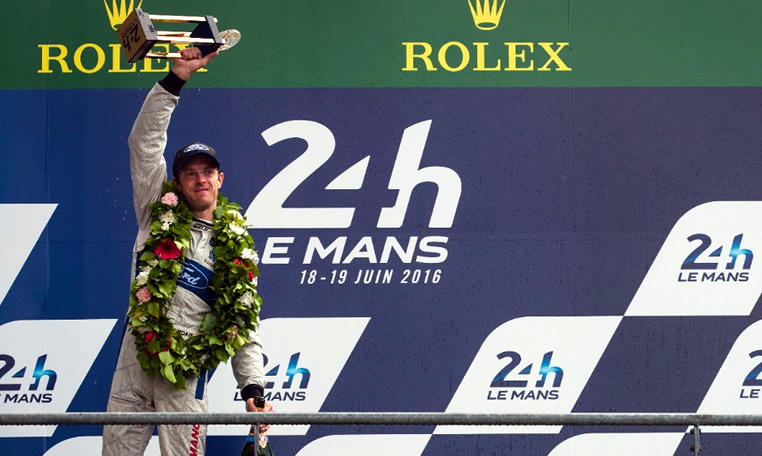 “It’s exciting thinking about going back. But also a little stressful because everyone is going to be looking at us and saying, ‘Alright, you set the bar there and now you have to do it again.’ But, at the end of the day, that’s what racing is all about. You do something big, and then the challenge is to keep it there.

“It’s great to be part of this programme. To be lucky enough to be in the GT on its return 50 years later, and then to have the scenario of Ford and Ferrari battling it out… it was such a privilege to be part of it and I will remember it for the rest of my life.

“The historic meaning of the race was really what did it for me. To put my name there and to be associated with a programme that means so much to so many people is special. To be honest, to give to the Ford family what they had been chasing it for a little while, with their commitment and dedication and heart was meaningful. When the family arrived at Le Mans, the whole thing took a different spin for me. I could tell it was very personal to them. It was not simply another race or another racing programme. That’s what was very special about it for me. ” 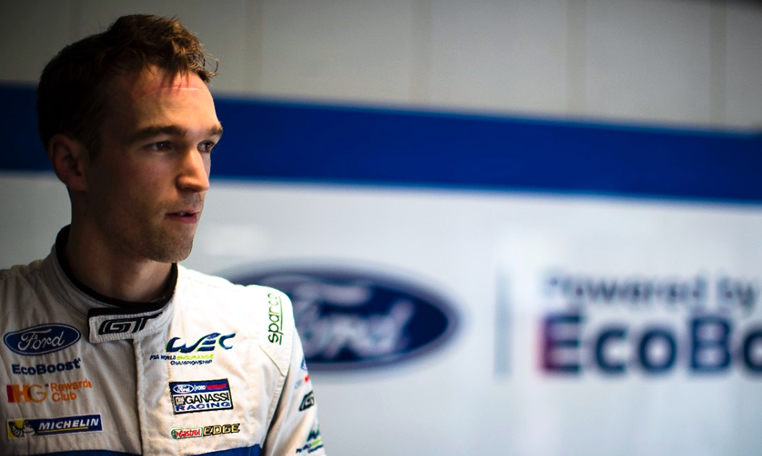 “One of the special things about Le Mans is that because some of the circuit utilises public roads you can’t go and test there during the year. You just get that one shot, every summer. It’s the biggest endurance race in the world. Over 250,000 people come along and create an atmosphere like nothing I have experienced before.

“The circuit itself is unbelievable. It’s high speed and it suits the Ford GT perfectly as the car was designed for Le Mans. We made history last year, on the 50th anniversary of the 1966 win. I’m in the #67 car and Ford won Le Mans in 1967 too so let’s hope we can make more history this year. I think we have a good chance this year. We (the WEC team) had only done two races before last year’s Le Mans but now we have a year of racing under our belts and we are a solid unit. We ended the 2016 season with a strong run of results and competing at Daytona last week means we are up and running early for the 2017 season.

“We go to Le Mans with high expectations. It’ll be tough of course but I can’t wait. It’s the biggest race of the year!”