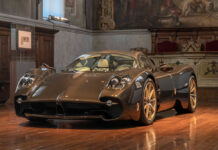 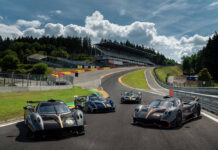 Onboard the Pagani Huayra BC for some hot laps at the Red Bull Ring! One of the rarest Pagani models ever, the BC is the track focused version of the Huayra and it sure does get a move on when pushed hard. With the GerCollector trackday filled with epic cars, there’s plenty of other action to enjoy too!

Officially, only 20 Huayra BCs were planned, featuring a 755hp twin turbo V12 and named after Benny Caiola, the first ever Pagani customer of a Zonda back in 1999. The BC name represents the more track purposeful version of the Pagani models and the Huayra BC Coupe was even rarer than the more recently introduced Huayra Roadster BC; being developed on the base of the quite different Huayra Roadster as opposed to a convertible version of the BC Coupe.

In fact, the Roadster BC has recently set a lap record time for a production road car of 2.23:08 at Spa-Francorchamps, demonstrating quite how much track prowess these cars have. That comes in part thanks to the suspension setup they run, but also owing to their remarkably low weight thanks to the use of carbon fibre, titanium and many more lightweight materials, plus a single-clutch gearbox that’s significantly lighter than the dual clutch equivalents.

Thanks to Pagani, Pirelli, and Simone Truzzi for the ride!