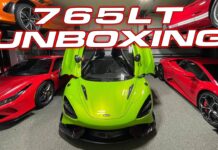 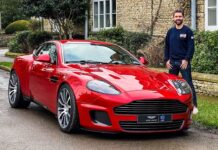 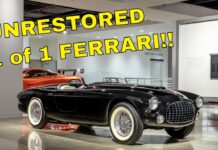 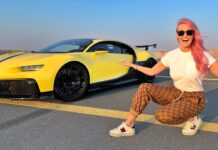 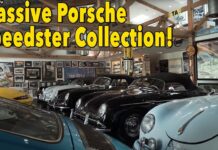 There isn’t much that’s more brutal than the Zenvo TSR-S! Let’s take a first full look at the show car in detail including the interior and firing it into life. This car introduces a whole host of new techniques and carbon fibre to be discovered during a full walkaround at Topaz Detailing where it is visiting for PPF installation. What do you think of this beastly hypercar from Denmark?

The Zenvo TSR-S is the third model from the company, TS for Twin Supercharged, R for the Race track only version that came after, and now the final S as it’s a Street offering with all the brutality. Powered by Zenvo’s 5.8 litre V8 it makes 1,177bhp which transmits to the rear wheels through a 7-speed paddle shift helical-cut dog gearbox. 0-100km/h (62mph) is 2.8 seconds, and 0-200km/h (124mph) is just 6.8 seconds before going on to a limited top speed of 325km/h (202mph).

Visually the design is aggressive and purposeful, but most strikingly of all comes the Zentripetal rear wing that actually pivots from side to side to aid downforce while cornering. Let’s take a good look at this, as well as showing the process to pivot it backwards in order to open the engine bay compartment.

However, with this specific car that was built to be shown at the 2020 Geneva Motorshow before the event was cancelled, a number of other aspects have been introduced. The visual carbon elements of the bodywork show a weave featuring various designs, patterns and text that’s unlike anything else before. Also, the wheels are made from a carbon process that makes them 15kg lighter than their aluminium counterparts.

IMPORTANT NOTE: This video was filmed prior to the outbreak of the crisis in Europe. The actions and behaviour you see may appear unusual due to new border restrictions, self distancing, and other health and safety measures and recommendations that have since been put in place. It is published to entertain and distract from the gloominess of the current situation. Best wishes go out to everybody who is affected by this global crisis and thoughts are always with you, especially during these trying times. Thank you for your support.