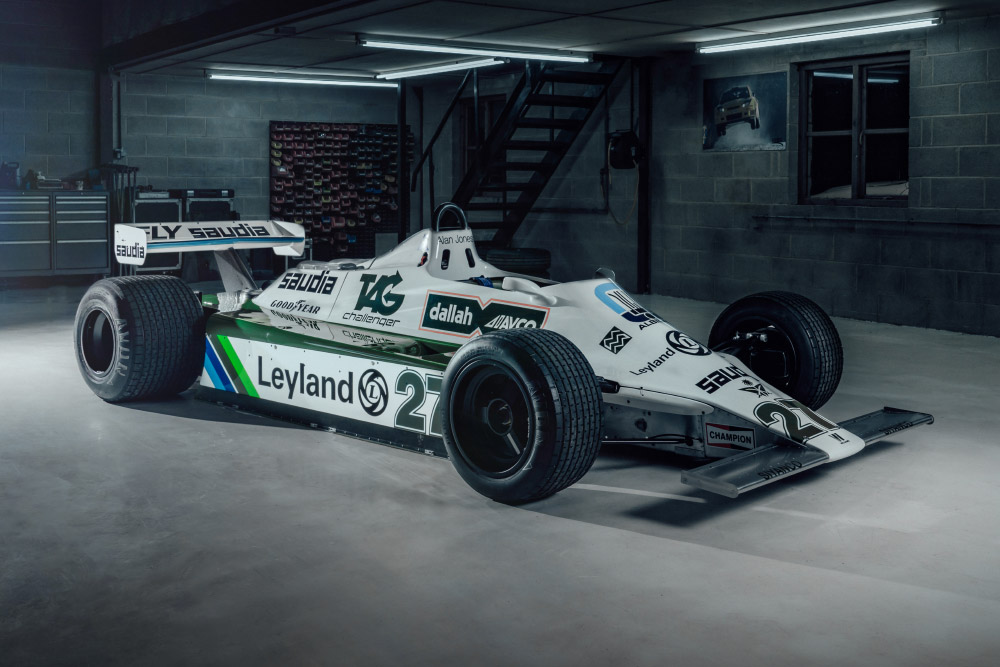 From their premises in Bakewell, Derbyshire, Fifteen Eleven extensively restored the iconic racer with a ground-up re-build after dismantling and shipping the machine from its Saudi Arabian home.

After a painstaking eight-week restoration, the legendary car was then returned to Jeddah where it was the first Formula 1 car to sample the all-new race circuit used as the penultimate round of the 2021 F1 World Championship. It was then driven by a host of F1 legends such as David Coulthard, Emerson Fittipaldi and Damon Hill and featured in a Sky Sports documentary.

The raucous Williams FW07/04 was first used by Australian F1 star Alan Jones in 1979 and would be the car that propelled him to the prestigious Drivers title and Williams to the Constructors title in 1980.

Jones would pilot “04” in the Argentinian Grand Prix in January of 1980, taking pole position and subsequent the race win, laying the foundations for a stellar season in the World Championship.

Having recently embarked on a high-end Porsche 914 restomod project which included a high-performance braking and suspension system, Porsche Cayman 3.4S 6-cylinder engine and 6-speed transmission, Fifteen Eleven Design was forced to put the project on hold after being tasked with the Williams restoration.

From the home of its owner in Saudi Arabia, the Fifteen Eleven team would visit the iconic machine to fully inspect and gather a better understanding of the work required. From there, they would strip the FW07 to its aluminium monocoque chassis, to enable transport to its premises in the UK.

The painstaking process would then begin of restoring the Williams to its original glory which included 3D scans and modelling to ensure a faithful re-creation of unavailable parts. A total strip-down and rebuild of all components began, from the wiring loom to the iconic green leather steering wheel often associated with the FW07/04. A brand new 3-litre V8 Cosworth DFV engine was commissioned and built by Geoff Richardson Racing Engines, coupled with a full transmission overhaul by specialists Mark Bailey Racing.

Over one thousand hours were spent bringing this legendary Formula 1 car back to life, before being returned to the Middle East ahead of the much-hyped Saudi Arabian Grand Prix. There, it would showcase the brand-new circuit, with a host of A-list motorsport legends taking to the track in the Williams.

They would include Formula 1 World Champion and Indy 500 winner Emerson Fittipaldi, winner of 13 Grand Prix’s David Coulthard and 1996 World Champion Damon Hill. In a special feature for Sky Sports, Hill would go head-to-head with pundit Martin Brundle in the sister 1979 Williams FW07/01 around the newly built circuit with the stands echoing to the sound of the glorious Cosworth unit.

With Sir Frank Williams CBE, founder of Williams Racing’s sad passing at the end of November, Formula 1 would also call on the FW07/04 to complete a lap of the circuit ahead of the race on Sunday with Hill at the wheel as a mark of remembrance of the inspirational mastermind and car builder.

Managing Director of Fifteen Eleven Design Chris Mellors was honoured to work on such a prestigious and high-profile project.

“The Williams FW07/04 project has undoubtedly been one of the biggest tasks Fifteen Eleven Design has undertaken and we certainly faced many challenges along the way, but it’s been simply magical to be able to return this iconic machine to its former glory,” he says.

“Whilst we had an idea of the amount of work required when we arrived at Saudi to analyse the state of the car it was pretty clear it would be a big ask to get it ready for the Formula 1 race at the start of December. The owner had given us just eight weeks and we quickly realised the full extent of the work required. But when you oversee something like this, you know you simply cannot cut corners in any way; you just make it happen.”

“We ensured we had a superb team around us and were equipped with all the experts we could find from both the ’70s and ’80s and immersed ourselves in that world for two months solid. Of course, there were modern elements that came into play such as 3D modelling, but that further reinforced the desire to ensure it took to the Saudi track in as original condition as possible”.

“Of course, seeing F1 legends take to the track after all our hard work was the icing on the cake and we are proud to have played our part in making a little history that weekend. It was made even more poignant with Frank Williams’ passing last month, of course, it was certainly a `lump in the throat` occasion for many. Seeing Alan Jones at the circuit and having the opportunity for him to be reunited with his winning Williams was a fantastic moment.”

Fifteen Eleven Design, the classic arm of the World Rally Championship team Mellors Elliot Motorsport has over 40 years of experience in engineering and building bespoke cars for competition and road use.