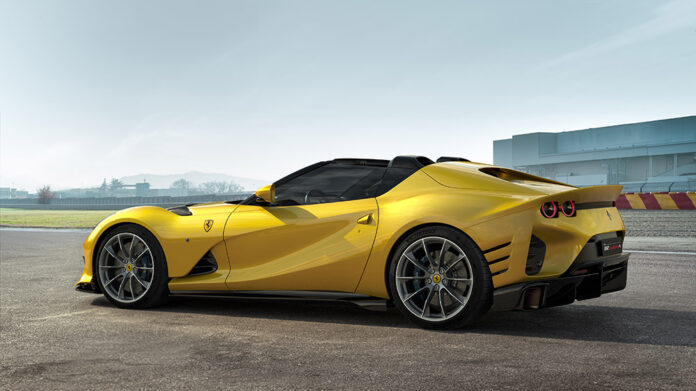 The Ferrari 812 Competizione, the new limited-edition special series car derived from the 812 Superfast, was presented today to media, clients and fans all over the world. In the course of the event, which was broadcast live on Ferrari’s social media channels, the wraps were also whipped off the 812 Competizione A, a spectacular Targa-top version, again a limited-series and an homage to the Prancing Horse’s glorious open-top tradition.

The presentation took place in a very special venue, the recently-opened GT Sporting Activities Department located alongside the Fiorano track, further strengthening the inextricable link between Maranello’s road-going sports cars and the peerless racing DNA developed as a result of over seven decades of success on the world’s circuits.

The launch began with the 812 Competizione completing several laps of the circuit to give viewers a full appreciation of the car’s forms in this dynamic and high performance context in addition, of course, to hear the unmistakeable sound of Ferrari’s iconic naturally-aspirated V12. After the hot laps Enrico Galliera, Ferrari’s Chief Marketing & Commercial Officer, officially presented the car and then unveiled the 812 Competizione A.

This duo of cars is dedicated to a very exclusive group of collectors and enthusiasts of the most noble of Ferrari traditions, which focuses on uncompromising maximum performance. The innovative technological concepts applied to the engine, vehicle dynamics and aerodynamics have raised the bar to new heights.

Once behind the wheel of the 812 Competizione and the 812 Competizione A, the driver becomes one with the car, regardless of whether it is on road or track. The car guarantees instantaneous responsiveness to commands and absolute control even in the most complex of manoeuvres. Maximum fun behind the wheel and driving exhilaration are ensured at all speeds, thanks in great part to the new independent, four-wheel steering, which delivers exceptional agility and precision in cornering.

The 812 Competizione A provided the Ferrari Styling Centre with the opportunity to use the modifications required for the rear of the car to create a truly unforgettable architecture. The flying buttress concept, which has long been a much-loved part of Ferrari tradition, harmonises effortlessly with the arrow theme of the front created by the blade and lends a sense of forward thrust to the car’s body, but also gives it a completely different connotation to the coupé.

The car’s centre of gravity appears lower, particularly when seen from the side, not only because of the roof and wraparound windscreen that flows into the side windows, but also because the flying buttresses at the rear are lower than in the 812 Competizione. With the Targa top stowed, the roll bars partly jut out above the rest of the bodywork but because they are carbon-fibre, they become secondary visual elements and so do not compromise the broader, more squat stance created by the flying buttresses. This amplifies the visual lowering of the side view.

In the closed configuration, the roll bars connect perfectly with the roof structure forming a seamless unit. The targa top is made from carbon-fibre to create a sense of aesthetic continuity with the roll-bars. In the open-top configuration, it is stowed in a compartment with the same design shape as the targa itself. Being able to stow the top at any time means the car can be enjoyed to the full, whatever the weather.

First Ever “Icons of Porsche” Festival Attracts Thousands of...