The Most Significant Ferrari 166MM Barchetta to be Honored 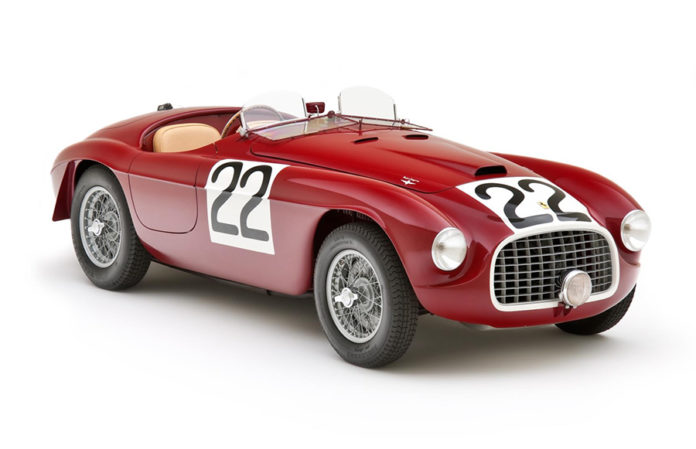 The Concours of Elegance will welcome perhaps the most significant Ferrari in the world to its 2019 event as part of a special 70th anniversary celebration of the 166MM Barchetta’s race victories at Le Mans, Spa and the Mille Miglia.

Four of the most historically significant 166MM chassis will gather in Hampton Court Palace’s beautiful Fountain Gardens from 6th-8th September, spearheaded by the ex-works #0008M – which is widely regarded as the most significant Ferrari in the world. It was uniquely piloted to a debut victory at both the Mille Miglia and the 24 Hours of Le Mans in 1949, making it the only car of any marque to ever have achieved that feat. It also secured the first of the marque’s nine victories at the legendary endurance race, after which it went on to be displayed at the Paris Auto Salon that year.

The 1949 24 Hours of Spa was then won that same year by the second works-entry 166MM, #0010M, which is also set to feature in the Hampton Court Palace display. It has resided in the US for the last half-a-century and will be making the trip across the Atlantic especially for the Concours of Elegance, representing a once-in-a-lifetime opportunity for UK car enthusiasts.

Former Fiat and Ferrari owner, Gianni Agnelli’s personally commissioned 166 Barchetta #0064M is also set to appear as part of the Concours line-up. The two-tone blue and green masterpiece won both class and outright victories at Circuit de Spa-Francorchamps in-period and has since been awarded the ‘Coppo d’Oro’ at the Villa d’Este Concorso d’Eleganza. It will feature alongside the third Ferrari Barchetta ever made, another Villa D’Este winner from some 66 years prior – chassis #0006M, a Barchetta that competed in the 1949 Mille Miglia, finishing 6th in class. Exactly 70 years after its first victory at Concorso d’Eleganza, #0006M was once again crowned a winner at the event during its 2019 running.

Two fine examples of the 166’s replacement, the Ferrari 212 Export will also join the display. A 212 Export Barchetta #0078E, winner of the 1951 Tour de France and driven by Phil Hill to victory at Torrey Pines in 1952, will be in attendance alongside 212 Export Berlinetta #0108E; an entrant into the 1952 Mille Miglia.

Regarded as the UK’s finest concours d’elegance, the Hampton Court Palace Concours of Elegance will, for its 8th event, return to the finely manicured gardens of the former home of Henry VIII. From 6-8 September, this once-in-a-lifetime gathering of spectacular vehicles will not only include the 166 celebration, and a world-first display of Aston Martin Zagato models, but a number of other as-yet unannounced features.

Of course, the Concours of Elegance’s central display of more than 60 of the rarest vehicles ever built will be the focal point, telling the story of the motor car from the pioneers of the 1890s right through to the latest bespoke hypercars. Picking out icons and rarities from the world’s most famous car brands, including Lamborghini, Ferrari, Bugatti and Rolls-Royce, the Concours of Elegance is a celebration of craftsmanship, luxury and innovation.

Andrew Evans, Concours of Elegance Director, said: “It is with great pleasure and excitement that we announce the latest feature at this year’s Concours of Elegance. Gathering this astonishing collection of heritage-laden 166MM racers – including the most significant vehicle in Ferrari’s incredible history, no less – is truly a once-in-a-lifetime event.

Having already revealed the world-first Aston Martin Zagato feature, which will display one of every model produced by one of motoring’s most legendary partnership, we’ve got the content of a world-class show already. Of course, that’s without mentioning what has always sat at the heart of our event – over 60 of the rarest cars ever built – and the near-1,000 rare and exotic cars that will make up our other features and car club displays.”