One of only two examples finished in Nero over Cuoio 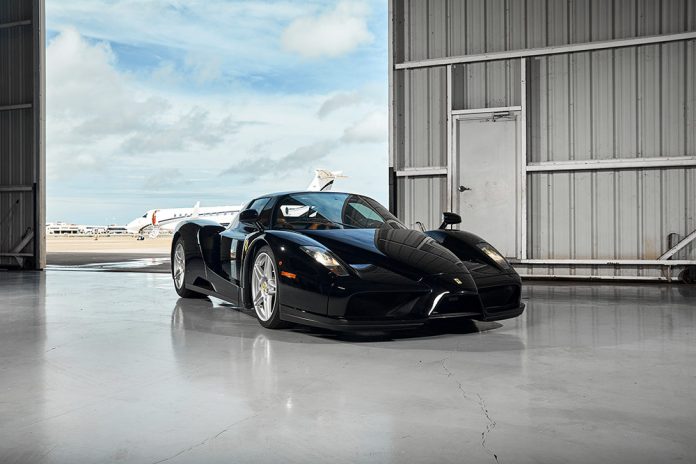 Ferrari releases a new range-topping supercar only occasionally, and it is always an event eagerly anticipated by the world’s tifosi—whether or not they have the means to acquire an example themselves. To say that expectations for the Ferrari Enzo were high, then, would be quite an understatement: Not only did the supercar follow in the footsteps of the landmark F40 and the thrilling F50, it was also to be named after Il Commendatore himself. In fact, the automaker bucked the model naming conventions by officially referring to the car as the “Enzo Ferrari,” rather than expected and popularly used “Ferrari Enzo,” further emphasizing the car’s status as tribute to the company’s founder.

Stylistically, the Pininfarina-designed Enzo was a drastic departure from the cars that came before. From nose to tail, form was a secondary consideration to function to allow for an unrivaled driving experience. Nevertheless, Pininfarina did a fantastic job in sculpting the company’s namesake with enduring presence to match its exceptional performance.

Gone was the massive rear wing that defined both the F40 and the F50, replaced by just a small speed-activated spoiler at the rear and aided by improved aerodynamics throughout. The protruding nose was a styling cue taken from Ferrari’s contemporary Formula 1 race cars and sought to highlight the Enzo’s use of race-inspired technology. Inside, there were few creature comforts, aside from the requisite leather-trimmed carbon-fiber bucket seats and air-conditioning, in order to keep the car as lightweight and focused as possible.

In terms of powertrain, it was also a step into the future for Ferrari: Although the Enzo used a mid-mounted naturally aspirated 6.0-liter V-12 (producing 651 horsepower and with an 8,200 rpm redline), the F50’s manual transmission was traded for a six-speed “F1” automated manual gearbox operated via paddle shifters.

In keeping with its rich tradition of limited-production supercars, however, the Enzo would be produced in limited numbers as well. By the end of production, just 399 examples were built, with an additional car built especially for Pope John Paul II, leaving total production at 400.

Given the model’s exclusivity, to say nothing of its price, it is hardly surprising that Enzos tended to be ordered by illustrious individuals; chassis 133118 is certainly no exception. Purchased new by developer and casino mogul Steve Wynn, it is notably one of only two examples of the model finished in Nero over Cuoio.

Under Wynn’s ownership, the car was displayed at the Penske Wynn Ferrari dealership following the opening of the Wynn Las Vegas resort in 2005. In addition to serving as a sales outlet for premier performance automobiles, the dealership was a popular draw for resort guests, who paid admission to see this very car and others. Unlike the majority of vehicles on display, however, Wynn’s Enzo was not officially said to be for sale—rather it was, quite understandably, an attraction in its own right.

By December 2005, the car had been sold to its second owner via Ferrari of Orange County, California (today known as Ferrari & Maserati of Newport Beach). The car, which had been driven fewer than 400 miles at that time, soon had paint protective film applied to its major exterior surfaces. Although the protective film was recently removed, it no doubt provided great protection to the car’s rich Nero exterior finish.

Today, the car records fewer than 17,540 miles from new. The bulk of these were accrued during the stewardship of its second owner, who clearly enjoyed driving the Enzo—but was equally dedicated to its proper care. Copies of invoices on file from Ferrari of Denver indicate regular service and inspection, adjustment and replacement of wear items, and close attention paid to even the smallest of fit and finish items. This care continued during the car’s tenure in the Fox Collection, with nearly $4,000 of service and inspection work performed following the consignor’s acquisition.

In the quest for cutting-edge performance, Ferrari is always moving forward. The Enzo’s successor, the LaFerrari, introduced electrification to its powertrain; it seems likely that Ferrari will continue to rely on that technology as emissions regulations tighten, making the Enzo’s pure, unassisted, naturally aspirated V-12 likely to be the last of its kind. Of course, it is also an enticing, high-performance by the standards of any era—as is only to be expected for a model named after Ferrari’s founder.

Accompanied by its Ferrari Classiche Red Book, as well as its owners’ manuals and flashlight in a leather pouch, and tools, this stunning, incredibly preserved example in an exceedingly rare color combination is fully deserving of a place of honor in any collection of Ferraris or significant modern sports cars.