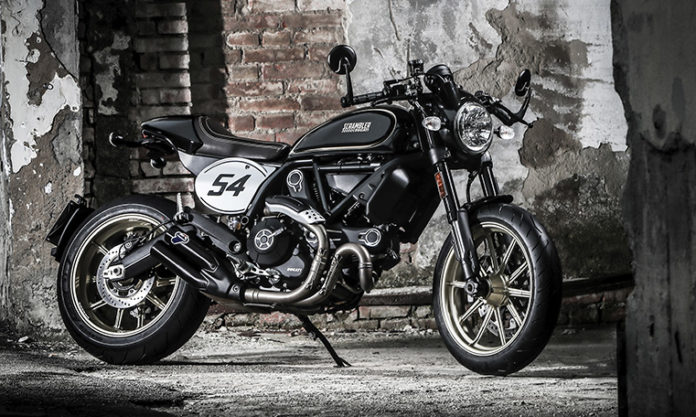 Just two years ago, when the new Ducati Scrambler brand was launched, nobody would have believed that today we would be here talking about a Scrambler Café Racer.

Back in the day, in London, a bold, forward-thinking group of young motorcyclists, the “Ton–Up Boys” of the Rocker movement, began setting up their bikes to win the sprint from one café to the next (each race was supposed to last as long as a Juke Box single).

Since then, the Café Racer culture has gone on to become a global phenomenon.

The Ducati Scrambler world and Café Racer culture share a style that extends beyond the bike to encompass apparel and accessories.

The Ducati Scrambler Café Racer thus broadens the scope of the Scrambler brand which, now, for the first time, offers a fresh take on what was one of motorcycling’s most influential movements.

This version has 17” wheels with Pirelli DIABLO™ ROSSO II tyres (120/70 ZR 17 at the front and 180/55 ZR17 at the rear), a pivotal feature on this more-Scrambler-than-ever version that provides plenty of scope for personalisation.

The Ducati Scrambler Café Racer is powered by the air and oil-cooled twin-cylinder Desmodue engine taken from the Icon, EURO 4-compliant and with black-trimmed covers and machined cooling fins. 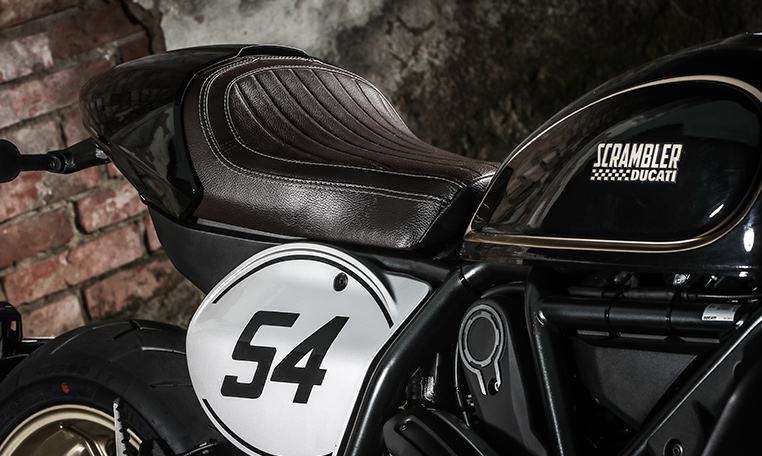 The characteristic teardrop tank with interchangeable aluminium side panels is combined with a dedicated seat featuring a cover for the passenger section.

Rear-view mirrors mounted on the aluminium handlebar ends draw their inspiration from the ’60s “race” look, while the radial front brake pump is a typically modern component able to ensure true sport bike braking performance. And that’s not all: the Termignoni exhaust with dual tailpipes and black anodized aluminium cover, the nose fairing, lateral number holders and stubby mudguard are all clear references to the bikes that roared down British streets back in the ’60s.

The chequerboard pattern is a recurring symbol in Café Racer culture. As in official competitions, the off-the-record races held by Rockers between one café and another would often end under a chequered flag. At the time, the distinctive black and white pattern became an icon for motorcyclists and others. The Ducati Scrambler Café Racer has, then, drawn on that powerful symbol and put the chequerboard pattern right underneath the Scrambler name. 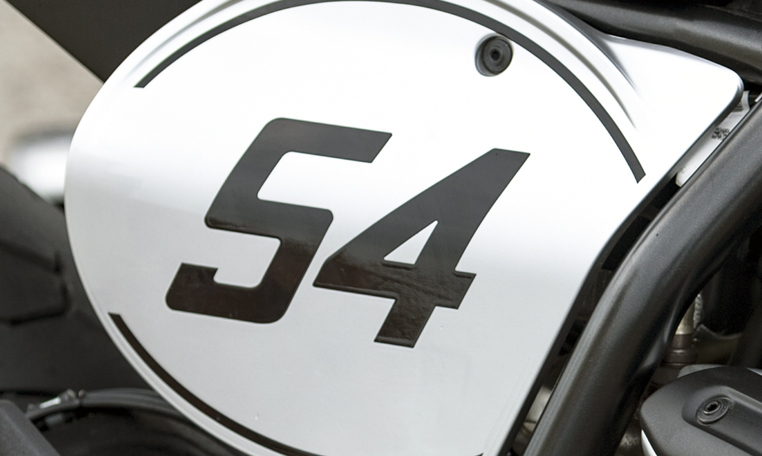 The novel lateral number holders on the Ducati Scrambler Café Racer carry the number 54 that once belonged to Bruno Spaggiari. A highly successful Ducati rider, in 1968 Spaggiari raced in the Mototemporada Romagnola, a classic road event of the time, on a Ducati with an engine derived from the Scrambler’s single-cylinder 350 cc power unit. The photo of his jump at the Cesenatico GP is iconic. Rippled by the roots of the pine trees, the uneven city centre asphalt created true “jumps” that tested the riders’ skills to the limit and ultimately determined who would win one crossroads after the other. The free spirit of those days – the same evoked by the Land of Joy – inspired the Ducati Scrambler Café Racer designers, who wanted to pay homage to the legendary rider from Reggio Emilia. 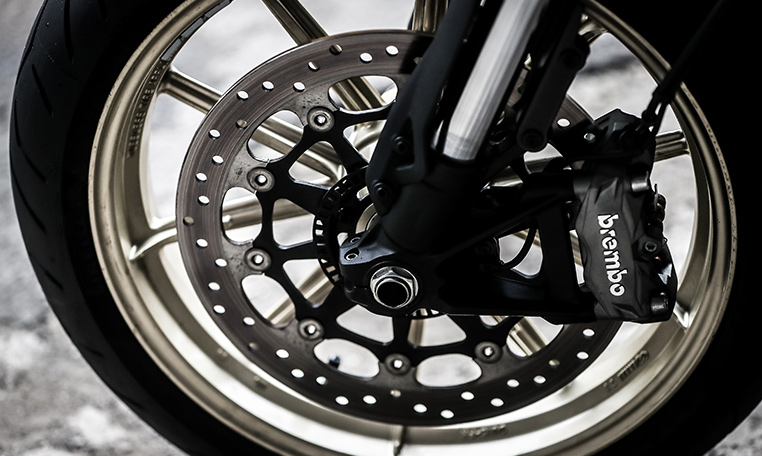 The Ducati Scrambler Café Racer mounts a Brembo braking system featuring a Bosch 9.1 MP ABS system with a pressure sensor. To combine maximum stopping performance with minimalist styling the front wheel has a single 330 mm disc (a good 5 mm thick) with a 4-piston Brembo M 4.32B monobloc caliper with radial attachment. The Ducati Scrambler Café Racer also features a radial – type front brake pump. This decision to mount a powerful single-disc front braking system was taken to leave a clear view on the right side of the wheel. At the rear, instead, a 245 mm disc is gripped by a caliper with a 32 mm piston.

The Ducati Scrambler Café Racer mounts the EURO 4-compliant, twin-cylinder 803 cc air and oil-cooled engine taken from the Icon. Together with the new homologation comes a new throttle control and an up-to-the-minute engine calibration that has made power delivery even smoother, especially at the bottom end of the rev range. Another distinguishing Ducati Scrambler Café Racer feature is the black engine, which contrasts strikingly with the brushed finish on the cylinder head cooling fins. 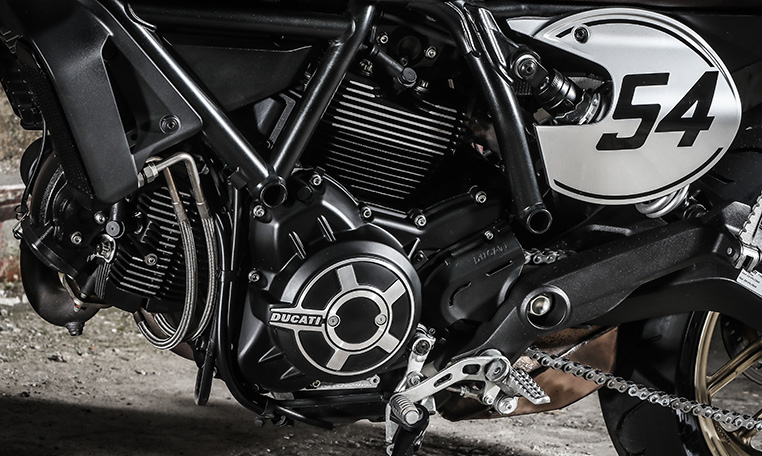 Equipped with a 6-speed gearbox, the twin-cylinder Desmodue engine on the Scrambler has been designed to favour smooth running and fluid acceleration throughout the rev range, delivering 75 hp at 8,250 rpm and a torque of 68 Nm at 5,750 rpm. Designed to be simple and accessible, just like the Scrambler itself, it features 12,000 km (7,500 mile)maintenance intervals.

Café Racer, Much More than a Bike

In perfect Scrambler style, the Café Racer has a dedicated line of accessories and apparel. For example, there’s the X-shaped headlight mesh guard, which evokes the tape that was once put in place to stop the glass breaking in the event of a fall; that same tape inspired the Scrambler designers when they were designing the headlight. Then there’s the distinctive long, flat seat, a small leather tank bag, the spoked wheels, rear view mirrors and the exhaust cover.

And when it comes to apparel for the Ducati Scrambler Café Racer, the Land of Joy offers an all-new black leather jacket, a full-face Bell helmet by Roland Sands Design, plus sweatshirt and T-shirts with real café racer flair.