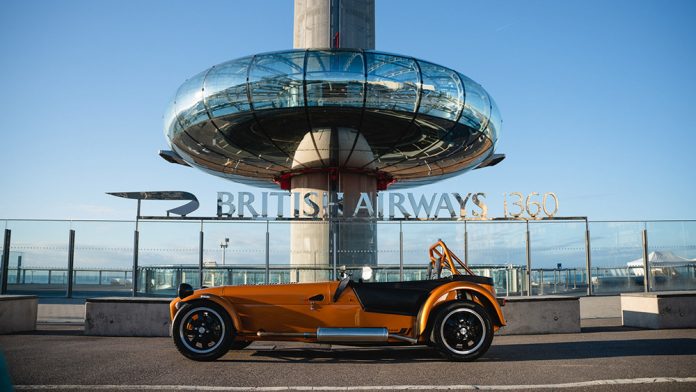 Caterham® is opening the world’s highest car dealership – 450ft in the air on Brighton seafront.

The pop-up store, supported by Avon Tyres and Halfords Advanced, will be based in British Airways i360 pod on Thursday 30th September and is opening to celebrate the first UK sighting of Caterham’s new Seven 170, its lightest ever production car.

In addition to being able to see the Seven 170 and other Caterham products on display, the British manufacturer will also be taking on its most ambitious car build challenge yet by assembling a Seven 170 from scratch in a day.

A team of Caterham engineers are setting themselves the dauting challenge of building the car in around six hours using Halfords Advanced hand tools. The build is happening between 10am-4pm – which is no easy feat when it’s estimated a one-person build takes around 100 hours.

Standing at 531ft, British Airways i360 is taller than the London Eye, Big Ben and Tower Bridge. The glass viewing platform offers stunning, 360-degree views of the south coast and the English Channel, which car enthusiasts can also enjoy while the vehicle build is in action.

Caterham Cars CEO, Graham Macdonald, said: “This is our lightest ever product so we wanted to launch it in a memorable way. We certainly feel opening the world’s highest car dealership in the British Airways i360 does that while also bringing to life how light the car is.

“In addition to opening the dealership, our team of engineers will showcase one of the most exciting things about our product – that you can build it yourself. We have built cars in interesting places before but never this high. It will certainly add another layer of complexity and excitement to the build.”

Halfords Workshop Buyer Emma Bailey said: “As the official tool suppliers of the Caterham Racing series, we are delighted to be supporting this brilliant event. We supply Halfords Advanced tools to all Caterham Race Technicians across five manufacturer-backed championships, meaning hundreds of drivers benefit from our tools that all come with a lifetime guarantee.”

Customers who are interested in visiting the dealership and seeing the new Seven 170 should contact their local retailer to arrange a viewing: https://www.caterhamcars.com/en/retailers

Anyone wanting to watch the build can buy a ticket: https://britishairwaysi360.com/plan-your-visit/tickets/.

By: Caterham | Photos Courtesy of: Caterham

Caterham Engineers Built Car from Scratch in Under Six Hours Inside British Airw...