By: Canepa | Photos Courtesy of: Canepa 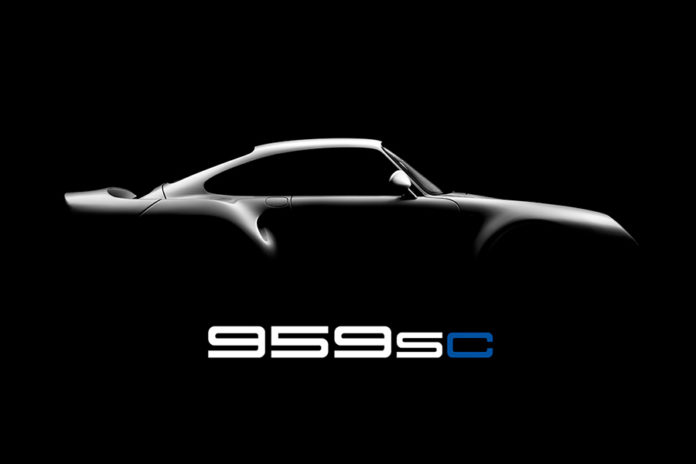 With the release of Porsche’s first production supercar in 1987, the 959 changed the automotive landscape as we knew it. It was the first supercar for the street with revolutionary technology like a sophisticated all-wheel drive system, twin-turbos, a 6-speed manual transmission, torque-vectoring differentials, futuristic Kevlar-body panels for weight savings and strength, and a 2.85-liter power plant that was extremely similar to the Porsche’s own race engines. These individual parts of the 959 when combined together would yield a car that was equal parts futuristic as it was advanced. Packaged neatly into a physical form that was both familiar and evolutionary of the Porsche design heritage, it would cement itself into automotive history as one of the greatest sports cars of all time and be a harbinger for the future of supercar technology.

Bruce Canepa was one of those fortunate enough to be able to experience a 959 in 1987. He immediately began the process of evaluating and analyzing the individual components and systems of the Porsche and determining how to bring the 959 into U.S. compliance. As if the task at hand wasn’t hard enough, doing so without forfeiting the driving characteristics of the Porsche added an additional challenge. Canepa was successful in legalizing the first 959 for the United States and with over 30 years of hands-on experience with Porsche 959s, Canepa has always been at the forefront with continued engineering and development. Over the course of the legalization of the 959, the performance was brought up to match modern supercars. Always pushing the envelope and looking for the next way to better the already prodigious platform that Porsche painstakingly brought to life, Canepa was successful with the first performance upgrade in 2001.

The Porsche 959SC (SC short for 959 Sport Canepa) represents the culmination of all the greatest aspects of concours restoration, research, design and adoption of state-of-the-art technology that Canepa has been directly involved in over the past three decades. The Porsche 959SC is the ultimate 959 from Canepa that is both bespoke and extremely exclusive. With the 959SC, combining Generation III performance, concours restoration, its one-of-one paint to sample exterior and a custom trimmed and upgraded interior creates a 959 that is unlike any other. Modern day technology is seamlessly combined with the 959 that produces modern day performance without sacrificing any luxury and comfort for the driver. Limited to only 50 units being built, Canepa’s expertise in 959 technology and concours-level restoration sets these cars apart from any others on the planet. Interested in learning more? Click here to email Canepa.

Beginning with a quality preowned 959, the car is completely stripped of every panel and system, down to the last component part. Once all items are removed and cataloged, the tub is then prepped extensively for its concours-level paint work. All of the painted suspension components are stripped and recoated using the latest powder coating techniques, giving the components extra longevity. Each and every part that originally was plated is stripped of its old coating and set out to receive a fresh zinc coating, restoring the lustrious metallic shine that they would have had from the factory. 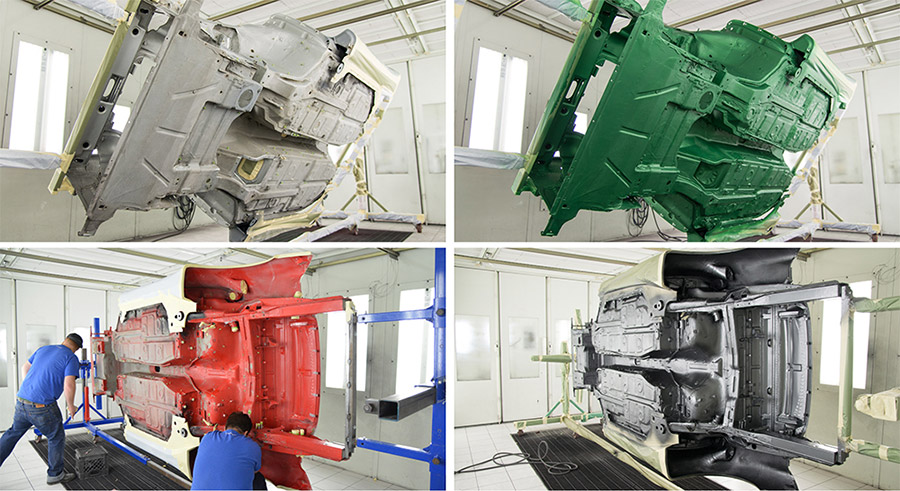 The Kevlar-epoxy body is then prepped for its concours-level paintwork. Each and every square inch of the car is looked over and inspected, ensuring that no surface is missed. Parts of the tub with rubber sealant are prepped by hand, ensuring the new paint adheres to every surface without fail. With the 959SC using Canepa’s modified and upgraded 959S suspension design, the hydraulic fluid filler cap on the driver’s side is removed just like the Porsche 959S were delivered from the factory. Over 500 hours are spent on the body alone before entering Canepa’s paint booth.

The 959SC is a car for any owner who wants a genuinely unique 959, with exterior color options and interior finishes that mirror Porsche’s own offerings. With most factory 959s being delivered in either white, red or silver, Canepa offers the 959SC with Porsche’s own paint-to-sample color palette. Bruce Canepa and the new owner collaborate closely and extensively, going through countless options and comparing paint samples with leather samples for the interior. No two 959SCs have the same exterior and interior color, creating a truly one-of-one design. From Seal Grey to Emerald Green, Pearl White to Liquid Metal silver, the only limit is your imagination.

With the mechanical and exterior side of the restoration under way, a concours-level upgrade begins on the place that you’ll spend the most time with your 959SC: the interior. Canepa’s full leather interior pairs perfectly with the craftsmanship of the 959SC, allowing you to enjoy the bolstered seats comfortably while taking your Porsche at speed. With all interior work done by Canepa’s master in-house trimmer, the aging leather and carpet are removed from the car, measured and then recreated via hand-made templates. Only the finest natural leathers are used. The leather steering wheel is expertly hand stitched. A Porsche Classic Radio Navigation System is installed and part of an all new sound system. In all, over 300 hours are invested in recreating the custom utilitarian but tasteful interior. 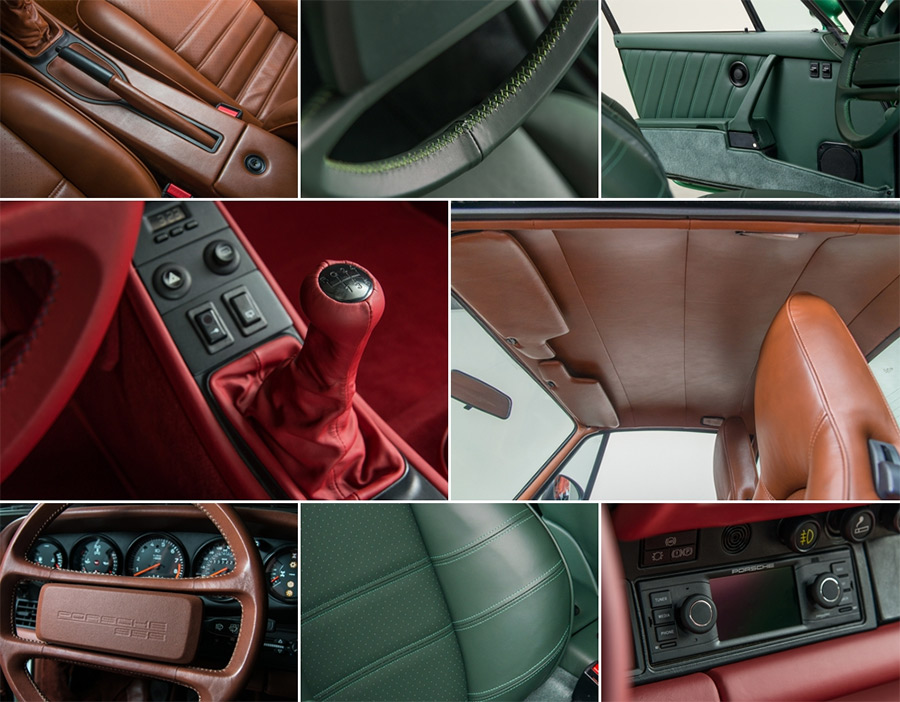 Benefiting from three decades of technology advancement, the 959SC gains 75% more horsepower over a stock Porsche 959 with overall reliability remaining the same by leveraging the already developed Canepa Generation III performance package. With the increased power, many modern supercars are left in the Porsche 959SC’s wake. A new equal length header design paired with the stainless-steel exhaust system in conjunction with the Borg-Warner turbo upgrade increases flow, decreases turbo lag and creates a sweet symphony of bass and air-cooled noises all at once. All auxiliary systems have been upgraded to support the stratospheric power levels, including a new engine management system, fuel system upgrades, and a more powerful ignition system. The entire clutch system has been modified and upgraded to improve pedal feel and actuation. Coming soon exclusively for 959SCs, Canepa has worked diligently to create a modern wheel that supports the best Michelin rubber that a performance car can acquire. A new 18″ magnesium wheel, designed to look exactly like the Porsche OEM, will allow modern tire technology to grace the 959SC. To see the full extent of the Canepa Generation III performance upgrade, click here. 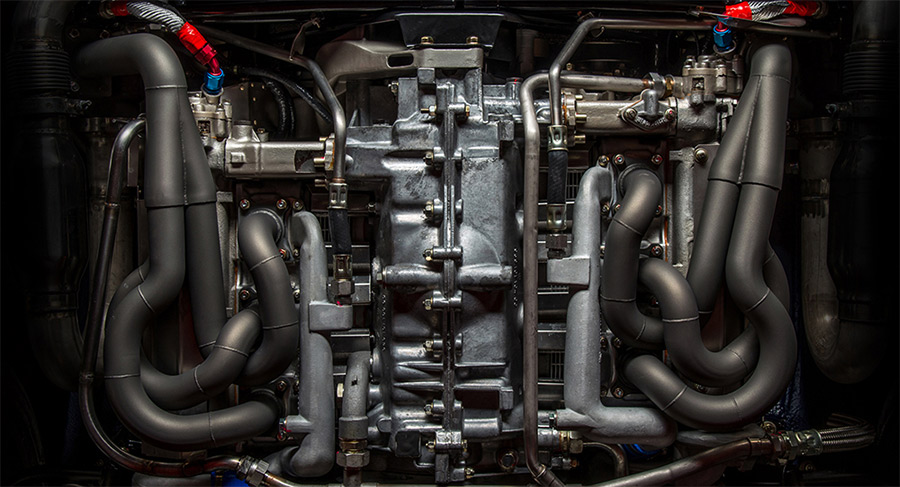