On Bastille Day, Bugatti explores its intimate connection with ‘French Racing Blue’ from its roots in motorsport and into its evolution for Bugatti’s range of exclusive hyper sports cars. Soon, it will be reinvented for a new era at Bugatti. 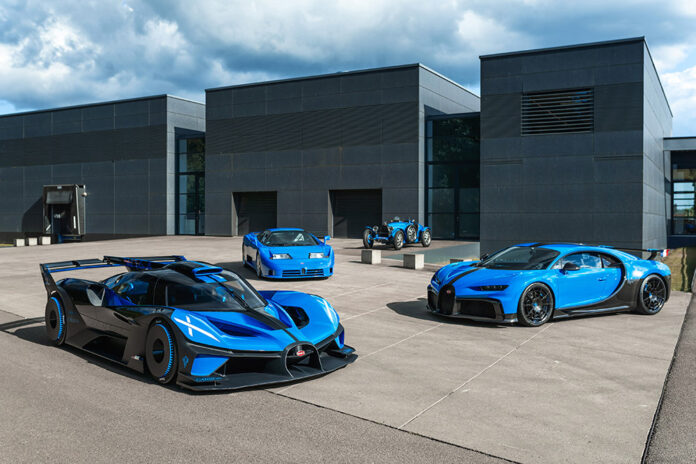 From the early motorsport successes of the Bugatti Type 35 to the reveal of the era-defining Chiron1, ‘French Racing Blue’ has been a core part of the Bugatti identity and a way of life: ‘La Vie en Bleu’. It became a symbol of the dominant Bugatti performances at motorsport events all over the world, and has since come to represent the very best of French engineering, innovation and design. As Bugatti enters an all-new era, ‘French Racing Blue’ will once again be reimagined.

Achim Anscheidt, Design Director of Bugatti, said: “French Racing Blue means passion, it means motorsport pedigree and it means patriotism. Early French racing cars, including many of the all-conquering Bugatti Type 35 models, wore a vibrant shade of blue instantly recognizable to crowds as they roared past at more than 100 mph.”

But just as the line-up has evolved throughout the years, so too has this iconic colour. Legend has it that Ettore Bugatti’s wife, Barbara, was fond of smoking Gauloises cigarettes, in their light blue packaging, and this might have become the inspiration for the early shade of ‘French Racing Blue’.

“The early 1920s pre-war Bugattis used a very light turquoiseish hue that turned into a more saturated neutral tone of darker blue by the mid 20s – the tone that most Bugattistis and aficionados of the brand mostly identify with the racecars of the Molsheim works to this day. Later, in the 1930s – during the era of Jean Bugatti – the duo-tone application became very popular on Touring and racecars, where the vibrant blue paired with a light turquoise blue became the identifying trademark of the Le Mans-winning Type 57 Tanks – a predecessor of the Duotone identity that is still part of Bugatti’s Design DNA. So tightly connected were the Bugattis and the shades of blue that over time, ‘French Racing Blue’ would informally become known as ‘Bugatti Blue’”, says Anscheidt.

When the Bugatti brand was reinvented with the Veyron in the early 2000s, the design team began their search for a shade of ‘French Racing Blue’ for the very latest era of Bugatti. In 2007, having painstakingly analysed the many shades of blue used since the company was founded in 1909, Bugatti released its modern interpretations of the colour for the reinvention of the brand under Volkswagen Group ownership. A warmer and a colder blue was defined, a neutral blue and – important for the new carbon fibre era of Bugatti – a blue-tinted carbon.

The process of creating this colour was the result of hundreds of hours of research, drawing inspiration from the early era of Bugatti. But with original genuine cars of the early pioneering Bugattis on hand, it was possible to find original paint shades on carefully preserved examples of these legends at top Concours d’Elegance events like Pebble Beach or Villa d’Este. Then, they needed to be reinvented for modern quality standards and tastes.

Anscheidt explains: “Early paints were often made from what was available at that time and – considering today’s standards – we simply couldn’t use them today. We need to create something timeless, but also reflective of the lines and styling of the classic and modern Bugattis.”

In the modern range of Bugatti vehicles, the application of ‘French Racing Blue’ goes further than just the exterior of the cars, with intricate contrast stitching against the leather interiors and a particularly difficult aluminium anodization process. Creating blue anodized aluminium for example is extremely complex, especially when you require the same shade consistently across many different components of the car. Each piece of aluminium, even if it appears identical will react differently during the process, even when all other conditions remain the same.

As Bugatti embarks upon a new era as a part of the joint company Bugatti Rimac, the latest reinvention of ‘French Racing Blue’ and the definition of a new ‘Bugatti Blue’ is already being considered as a core part of the brand’s future identity. It requires a tone that is timeless, immediately recognizable and a homage to Bugatti’s rich history. It must portray ‘La Vie en Bleu’ to owners, fans and enthusiasts across a whole host of platforms – both digital and physical. But of course, the most important of all is its application to a future range of Bugatti vehicles.

Anscheidt concludes: “It is important for us now to look at every aspect of our design, our engineering and our production afresh. Of course, we are working to the Bugatti principles of speed, luxury, beauty and innovation, but more than ever we are looking at sustainability. And the creation of a new ‘French Racing Blue’ with sustainability at its heart is already underway. We are looking at the whole process from cradle to grave and reassessing all of our materials. We need to consider how we harvest wool, how we create textiles and what is now considered to be an ultra-luxury material in the modern age. Just one example: When you look back into history, the chauffeur would be sitting on leather because it wasn’t considered a luxury. The Royals however would be sitting on silk and other precious textiles. Now that’s something for us to think about as we enter a new era.”