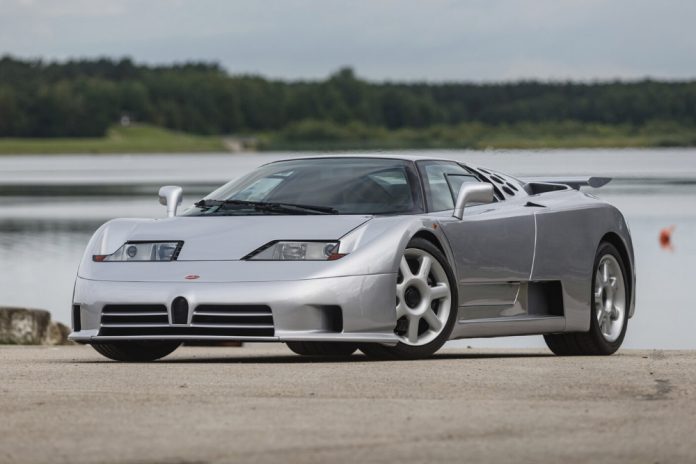 A 1994 Bugatti EB110 Super Sport – the only Bugatti to be designed and built in Italy -was the top lot, selling for €2,242,500, at the Bonhams Zoute Sale yesterday (10 October), in the auction house’s successful return to its traditional location on the beach in Knokke-le-Zoute, attaining a total of €12.3 million, the highest amount achieved since the auction was first staged in 2012.

Unveiled on the 110th anniversary of Ettore Bugatti’s birth, the EB110 was a poster car of the 1990s, and the 30,000 kms example offered, one of just 30 Super Sport variants produced, was the star of the show for the Zoute Grand Prix crowd, being photographed and filmed throughout the weekend.

Its popularity continued in the packed saleroom, which had a new cabaret layout, with the car being the subject of a 15-way bidding war between the saleroom, the internet and telephone bidders, before it was sold to a private Dutch collector on the telephone, to applause from the lively Zoute crowd.

In its slipstream was, a ‘timewarp’ 1989 Ferrari F40 Berlinetta which achieved €1,840,000 in the Belgian seaside resort. The one-owner example of Ferrari’s 40th anniversary supercar, ordered from Garage Francorchamps, had been dry-stored since 1992 and had covered fewer than 1,800 kilometres from new.

Another of the numerous Italian collectors’ motor cars which performed well today was a 1961 Ferrari 250 GTE 2+2 Coupé – the marque’s first production four-seater, with a top speed in excess of 230 km/h. Delivered new to Garage Francorchamps, and concours-restored with Ferrari Classiche certification, this example achieved €592,250.

Also flying the tricolore was a fellow 1960s Ferrari – a 1969 Ferrari 365 GTC, offered for the first time on the open market, which achieved €655,500. The original matching numbers example had been kept by one Italian owner from new.

Other highlights in today’s sale included:

Maarten Ten Holder, Managing Director, Bonhams Motoring and the auctioneer for today’s sale, said: “It was a fantastic return to Zoute for us. The sale’s success and the energy and enthusiasm of the Zoute crowd made it a very festive afternoon. It was great to see everyone enjoying themselves and, of course, to have achieved such a strong result.

“Congratulations from us both on a fabulous new set up in the form of the PRADO on the beach and our thanks, as ever, to the organisers of the Zoute Grand Prix. We look forward to returning next year for our decennial anniversary auction at this superb international venue.”

The final sale of 2021 for the Bonhams European Motor Cars team will be the Autumn Motoring Online Auction, 19 – 29 November. For more information, contact eurocars@bonhams.com or visit: www.bonhams.com.