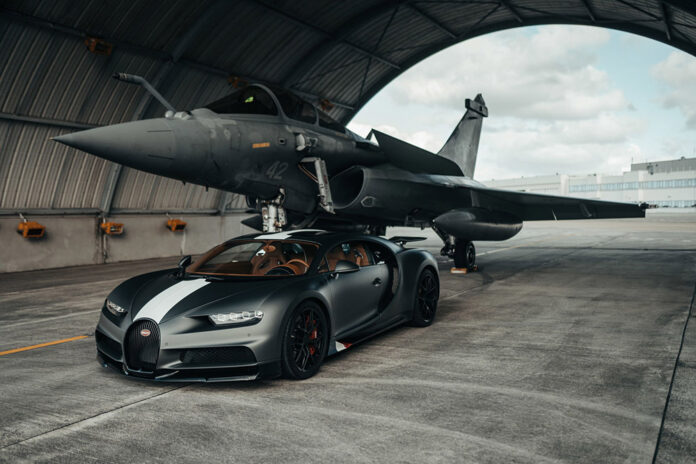 The driver and the pilot both look ahead, highly focused. They wait for the starting signal. The famous French Tricolor drops and moments later, the asphalt begins to vibrate. The two set off alongside one another. The driver and the pilot look into the horizon and go full throttle. With tires on smooth tar, two engines ignite their afterburners and proverbially light up the black surface. The two machines of kin and shared legacy roar and disappear out of view in a matter of seconds.

This is the start of an extraordinary match-up in Landivisiau, north-west France: the Bugatti Chiron Sport alongside the Dassault Rafale Marine. 1,500 PS up against 58,550 newtons of thrust (5,727 PS), a hyper sports car up against a Navy jet. The two high-technology products from France are at the top of their respective fields and stand for the technical progress made after decades of development work in automotive and aerospace engineering.

Two professionals occupy the cockpits – Bugatti’s pilote officiel Pierre-Henri Raphanel in the Chiron Sport and frigate captain Etienne in the Rafale Marine. They and their teams have been preparing for this day for weeks. The tension leading up to the start is immense for everyone involved.

Setting the most incredible scene

With its outstanding performance and incredible top speed, the Bugatti Chiron Sport is almost peerless in the automotive world. A Bugatti has gone toe-to-toe with a jet before. A Veyron 16.4 took on a Eurofighter Typhoon in a drag race in 2007. In the current match-up, the Bugatti Chiron Sport and the Dassault Rafale Marine are seeing how they measure up against one another in disciplines like acceleration, torque and braking behavior.

It’s an elaborate process that involves planning to even the most minute detail. Even a short flight calls for extensive preparation and follow-up. “Precision and preparation are everything. Everything happens very quickly in the Rafale Marine and every move you make has to be right. And the same goes for the Chiron Sport at high speeds,” explains Navy pilot, Etienne. “At high speeds, everything has to go perfectly both in the Chiron Sport and the Rafale Marine. Because the runway isn’t all that long or terribly wide for the both of us. This comparison will be a challenge for everyone,” adds Pierre-Henri Raphanel, Bugatti’s pilote officiel.

It was therefore only logical for Bugatti to unveil the Chiron Sport ‘Les Légendes du Ciel’ at the end of last year, limited to just 20 units. It is the French luxury marque’s way of honoring French aviation and the former Bugatti drivers of the golden age who also piloted airplanes. Since it was revealed the Chiron Sport ‘Les Légendes du Ciel’ forges a link between the past and the present.

The limited edition Bugatti features attributes to aircraft, such as the Gris Serpent matte grey paintwork and the blue, white, and red Tricolor, which adorns the front of the side skirts made from black visible carbon fiber. The bars of the radiator grille are made from laser-cut, deep-drawn aluminum and are reminiscent of planes in a flyby formation. A brushed aluminum door sill panel with the lettering ‘Les Légendes du Ciel’ identifies the edition.

It has a leather interior in the Gaucho color which is reminiscent of the natural leather used in airplanes in the past. This natural material is contrasted with aluminum trims and an aluminum inlay featuring the ‘Les Légendes du Ciel’ logo, which also features on the headrests. On the door panels, there is a sketch of a racing scene between the Nieuport 17 airplane and a Bugatti Type 13 that represents the two historical links commemorated by the limited edition hyper sports car.

The appropriate power is provided by the 8.0-liter W16 engine with 1,500 PS and torque of 1,600 newton meters. A seven-gear dual-clutch transmission transfers the power to all four tires. The edition, limited to 20 units, retails at a net price of 2.88 million euros.

Behind the steering wheel sits a man of speed and precision in the cockpit: Bugatti’s pilote official, Pierre-Henri Raphanel. He took part in the 24 Hours of Le Mans 14 times between 1986 and 2000, finishing second twice and once winning the GT category, won the French Formula 3 championship in 1985, and, four years later, qualified for the Formula 1 grand prix in Monaco. The race car driver has been assisting Bugatti with his expertise for more than 10 years and in 2010, he broke the speed record for road-legal super sports cars for Bugatti in a Veyron 16.4 Super Sport (431,072 km/h / 268 mph).

He has been test-driving the hyper sports cars from Molsheim on various roads as well as tracks and with customers ever since. But this encounter between the Dassault Rafale Marine and the Chiron Sport is a first for him, too. “We may only be driving straight ahead on a runway but setting off alongside a jet demands a great deal of attention and concentration, especially at high speeds,” explains Pierre-Henri Raphanel. With the Chiron Sport, it is the combination of seemingly never-ending power output and torque that delivers this incredible thrust. As soon as the flag drops, the Bugatti accelerates unrelentingly all the way to the end of the runway.

Alongside the Chiron Sport is the Rafale Marine, the pride of French Navy aviation. After France left the Eurofighter program, the French company Dassault developed its own aircraft; one which was uncompromisingly tailored to the requirements of the French army. This includes the ability to be able to take off over especially short distances. This is possible thanks to its virtually tailless delta wing construction in a mid-wing design with canard wings. It is a light, versatile, land- and carrier-based multirole aircraft.

The twin-engine jet has been in the service of the French armed forces since 2000. It has a dry weight of 10.3 tons, a maximum weight of 24.5 tons and is used for a variety of tasks. With its length of 15.5 meters and a wingspan of 10.86 meters, the Rafale Marine – in single-seater configuration for the Navy – can achieve a top speed of more than 1.6 Mach or around 1,975 km/h. But what really sets it apart is its maneuverability. It can take off from and land on aircraft carriers like the Charles de Gaulle. Around 200 Rafale aircraft have been produced to date, 46 of which are Rafale Marine jets.

“The Rafale Marine is easy to fly, highly versatile, and very fast and it also looks elegant and slick. It’s a great aircraft, but it does demand complete concentration for every maneuver,” explains Etienne. He should know as he has been flying for 20 years and currently works as head of Operations at the base d’aéronautique navale in Landivisiau. In 2006, he earned his fighter pilot certification and qualified to land on the aircraft carrier Charles de Gaulle. He has been flying the Rafale Marine for five years and has notched up over 2,000 flight hours in jets as well as more than 500 catapult take-offs and landings on the aircraft carrier. Between 2017 and 2019, he has been Commander of Flotilla 12F, a flotilla with a long history.

The encounter between the Chiron Sport and the Rafale Marine

Returning to the scenario at hand: the Bugatti Chiron Sport takes the lead soon after setting off. The hyper sports car accelerates from 0 to 100 km/h in 2.4 seconds and to 200 km/h in 6.1 seconds. It takes 13.1 seconds to hit a speed of 300 km/h and 32.6 seconds to accelerate to 400 km/h, a speed at which pilot, Etienne, and the Rafale Marine look to match to take off.

The aircraft hits 165 km/h after 150 meters and 210 km/h after 250 meters, and takes off after 450 meters at around 260 km/h. “I pulled away from the Rafale over the first few hundred meters, but after a few hundred meters more it was around 20 meters above and alongside me in the air. An incredible and fantastic sight,” says Pierre-Henri Raphanel later. To be on the safe side, the Bugatti driver initiates his braking maneuver after approximately 1.5 kilometers and over 350 km/h – by which time the Rafale has disappeared into the horizon.

To be able to decelerate stably at high speeds, both machines use extra-special brakes. It takes the Bugatti Chiron Sport 491 meters to come to a standstill from 400 km/h and 247 meters from a speed of 300 km/h. It travels 114 meters when decelerating from 200 to 0 km/h and 31.4 meters to get down from 100 to 0 km/h. Due to the shortness of the runway and the safety regulations, the Chiron Sport brakes at just 210 km/h and the Rafale Marine at 250 km/h.

To compare its braking performance with that of the Chiron Sport, the Rafale Marine approaches the runway at approximately 280 km/h (150 kt), makes contact with the ground, and catches the arresting gear with its tailhook on the rear, just like on an aircraft carrier. Etienne is thrust into his seat belt and the machine comes to a standstill within 150 meters. “It’s a very extreme sensation, as if you were driving into a wall or like a controlled fall,” he says, describing the maneuver. The Chiron Sport, meanwhile, brakes powerfully, but more softly. “With the air brake at the rear, the Bugatti remains incredibly directionally stable, even during abrupt braking maneuvers down from high speeds,” explains Pierre-Henri Raphanel.

The comparison of France’s top two technical systems is therefore declared a draw. They share more in common than what sets them apart from one another – in terms of technology and driving/flying behavior as well as emotionally. “Setting off alongside and so close to the Rafale Marine was an incredible experience,” explains Pierre-Henri Raphanel. To which Etienne adds: “The Chiron Sport is the ideal vehicle for navy pilots.”