This meeting brings together Centodieci with EB110 Supersport, the car Bugatti’s design team looked to for inspiration in the creation of its new coachbuilt hyper sports car 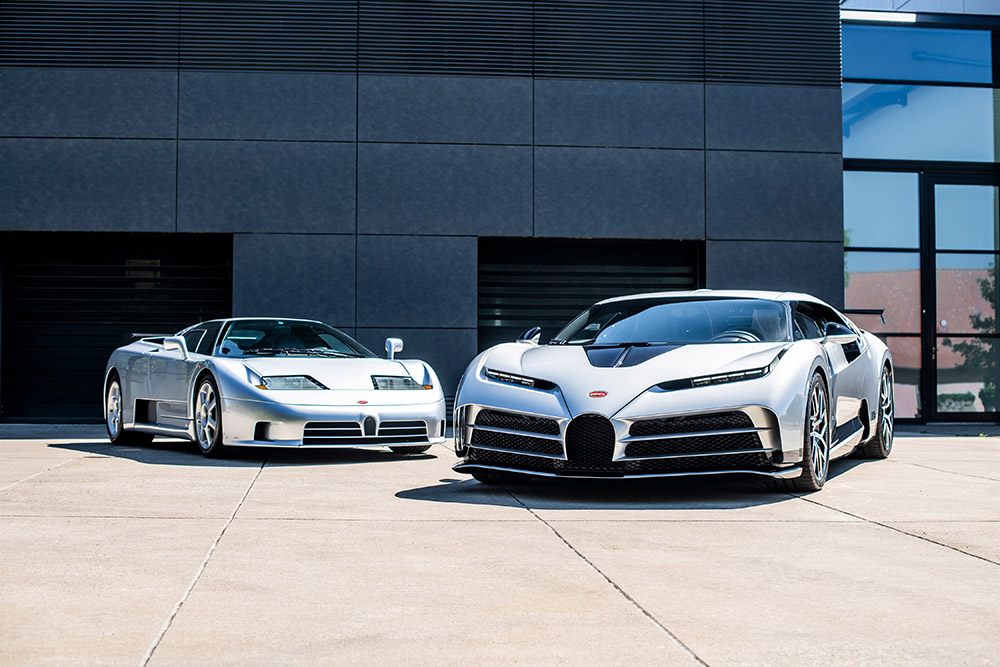 This meeting brings together Centodieci with EB110 Supersport, the car Bugatti’s design team looked to for inspiration in the creation of its new coachbuilt hyper sports car. Designed and produced during the Romano Artioli era of Bugatti in the 1980s and 1990s, the EB110 Supersport was a lighter, more powerful iteration of the EB110 GT, complete with new styling changes and a fixed rear wing for additional downforce.

Achim Anscheidt, Bugatti Design Director, said: “The EB110 is unique in the Bugatti history. With the brand’s rebirth in the late 1980s the EB110 emerged with timeless sports car proportions. Its design was finished by Giampaolo Benedini, the architect responsible for the Bauhaus-inspired Campogalliano factory of the period, and the EB110’s memorable graphics and sophisticated shapes certainly reflect that architectural approach. But what was true of the EB110 Supersport is true for us today: form follows performance. So we wanted to look at why this car looked the way it did, and reinterpreted that for a modern era Bugatti.”

The similarities are immediately obvious. The Supersport was fitted with five instantly recognizable cooling holes in the B-pillar, necessary to feed air to the 3.5-liter quad-turbocharged V12 engine. That air then washes through the glass-covered engine bay and exits via ten slots in the rear. In the Centodieci, these elements are reinterpreted and modernized, with air entering through five cooling ports in the apex of a newly shaped Bugatti C-line, over the W16 engine – which receives an EB110-inspired glass cover – and out through the rear, including in between a new light signature that mimics the vents on the EB110 Supersport. At the rear, an enlarged rear diffuser houses vertically stacked quad exhausts, in a modern homage to the EB110 Supersport’s twin pipes.

Nils Sajonz, Head of Special Projects in the Bugatti Design Team, said: “When designing a car that is able to reach safely the speeds the Centodieci is capable of, you have to take into account many different considerations. It must be safe, it must be aerodynamic and it has to direct air effectively around the powertrain components for cooling. We used the Chiron powertrain and monocoque as a base, but the development of the Centodieci was so wide-ranging that we were essentially designing an entirely new car. To achieve the desired levels of performance and stylistic perfection, this is the only way.”

Paying appropriate homage to the EB110 Supersport meant the design team had to focus on reimagining its iconic silhouette, which appears to leap forwards even while stationary. This meant creating an entirely new roofline and profile, with a front that sits much lower and a rear that sits much higher. The new visor-inspired glasshouse appears to sweep seamlessly around the body, while a new frontal visual identity is inspired by the EB110’s understated Bugatti horseshoe grille.

With the proportions set, the design team looked at modernizing elements of the EB110’s Bauhaus-inspired flat surfaces and details. The sides of the Centodieci create a play of light and shadow with only gentle curves, while the slab-shaped headlights of EB110 evolve into cutting-edge slimline LED headlights on the Centodieci – a bespoke development just for this project.

Achim Anscheidt continued: “Some have argued that without the EB110, the Bugatti brand would not be in the position it is today. The car helped to shape the new vision of the company following its acquisition by the Volkswagen Group in the late 1990s. We have engineering geniuses such as the recently departed Nicola Materazzi to thank for its incredible performance, but we also recognize the amazing vision of its designers. The timeless shape provided us with endless inspiration to create a fitting homage to this very significant piece of Bugatti history.”

Just ten examples of the highly exclusive Bugatti Centodieci will be hand-built in the Molsheim Atelier and delivered to customers until the end of the year, with each already sold at a unit price of eight million euros.

A special thanks to Turbollection – owner of the stunning EB110 Supersport – for bringing their prized automobile to be united with the recently delivered customer CENTODIECI.